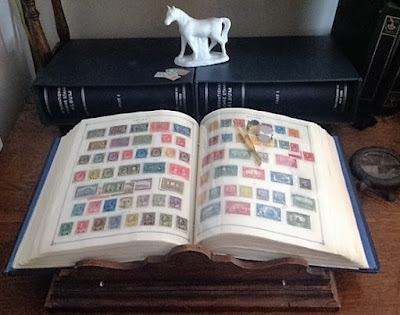 Completed Big Blue - A View that Inspires
Bud's Big Blue
Note: For the Index and links to posted countries - updated frequently- , scroll down.

Jim‘s request for scans of my completed Big Blue to post in his blog came as a welcome surprise. Images of filled pages, he reckoned, would appropriately illustrate his posting for each country. I agree and am pleased to comply. 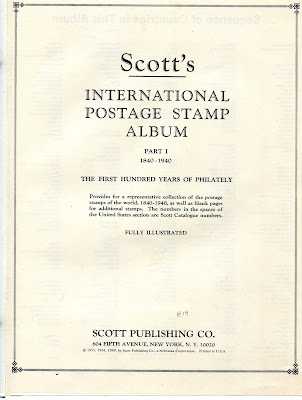 BB Title Page
Postings follow an alphabetical listing of countries, as is the case in Jim’s blog, rather than the order of countries in the album (see album index page below). Countries with many stamps require more than one posting. Five to ten posts will appear each month. USA pages are last.  A section for Jim’s and my remarks follows each country’s images, as well as an interactive section for viewer comments and suggestions. 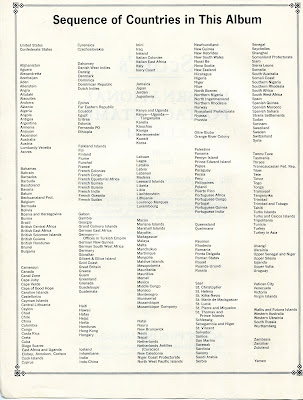 BB Country Table of Contents
(Click image to enlarge)
About this Collection
Stamp collections in albums are prone to idiosyncrasies. Mine is no exception. So, as a caution against other collectors viewing these scans as definitive of what a completed BB ought to look like, I’ll describe the approaches I have more or less followed during 60 years of compiling (accreting? hoarding? heaping up?) this collection.

Until I bought my BB in 1970 as a graduation present to myself, scavenged business-size envelopes housed the collection, one for each country. The envelopes were fast filling up with the stamps torn off such old letters and international correspondence as I had access to. Once hinged in the new album, the stamps looked skimpy indeed.

I never expected to fill my BB, but I did want more stamps. I settled on a strategy: buying albums at household auctions, picking a few that I wanted, then selling the albums at different auctions. I rarely bought individual stamps or sets. I have continued buying albums up to the present time. Sometimes I made money in this process, sometimes lots of money, and the collection grew. A disadvantage to this approach is that I often incorporated placement errors made by the albums’ previous owners into my BB. More important, though, I began developing preferences for which stamps I wanted to keep and which to replace. And, when I found I had made errors, they were usually easily corrected. . In addition, the collection has benefited greatly from the help of a wholesale stamp dealer who, despite my urging to the contrary, wishes to remain anonymous.

All Scott-elect stamps are acceptable for my BB, but I give preference in the following order:


1.Cancelled stamps with historical or artistic merit, even if happenstance; for example, a stamp cancelled on 9-11-2001 in New York City would qualify, were there a space for it.  These are working stamps with, say, highly commendable résumés.

2.Clear date and place cancels; small town cancels; socked-on-the-nose and fancy cancels; otherwise collectible cancels, for example, “Zug” on Germany stamps. Résumés for these are interesting but not as spectacular.

3.Mint well-centered with light or no hinging; “specimen” overprints. These are non-working stamps with no résumés, but they’re getting ready.

5.Mint or used stamps with poor centering; heavy cancels or hinges; CTOs; grubby or toned stamps; fiscal cancels; stamps with small defects; hand written cancels unless they qualify for category 1 or 2 above. These are generally hardworking, but with weak résumés (they don’t look good on paper).


6.Major defects (overworked stamps), forgeries, counterfeits, reprints (official or unofficial), printed but never put into use (non-working stamps). I prefer not to have these even though BB actually includes spaces for a few of them.  But, lacking anything better, they’re in, at least for now.

As opportunities came, I traded upward on the above scale. Two additional categories, though, are unacceptable. If you find any of these on the scanned pages (there are no doubt some), let me know! I’ll replace them, then banish them to the supplementary pages where they can hobnob with other BB outcasts.

7.Technical misfits--stamps of the same or very similar design to the Scott-elect, but not quite one of them. Perhaps they were issued outside the specified date range. Or they might differ in perfs, color shades, overprints, watermarks, or minor wording.

8.Outright interlopers, weeds -- these are unauthorized stamps that occupy spaces Scott reserved for the elect. Resenting not being among the chosen, I suspect, they sneak in, hoping to remain unnoticed. BB blank spaces are vulnerable to such intrusions.

Interlopers and weeds, however, are in their own right worthy of being collected. Many of the excluded have stories to tell, some have high CVs. Everyone who builds collections by pilfering through old albums will, as I have, accumulate many such stamps. So, what’s to be done with them? You’ll see two strategies in the scans. Some are tipped in partly beneath the particular Scott-elect stamps to which they most closely relate. Others are found in the supplement pages. Supplement pages may also display interesting duplicates, small covers, fiscal and local stamps, proofs, freaks and anomalies, etiquettes, cheeky frauds, and even the occasional Cinderella, all of which relate to the classic era of philately.

Although every space in my BB is filled, the activity of collecting goes on. Preening, that is replacing stamps lower in my preference list with stamps higher up, will continue indefinitely. Supplement pages will, no doubt, mushroom.

Recently a friend gave me a stamp that summarizes my collecting philosophy well. It is Scott USA no. 340 with a cancel that reads BUD. The accompanying cert says it is normal, used and genuine. And it’s cheap. I rank it as a #1 preference. 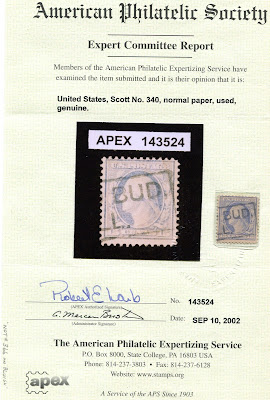 Bud Cert.
A Note from Jim
I am more than pleased that Bud has agreed to present his 100%! filled Big Blue country pages here. And, clearly, it makes sense, considering the purpose of this blog.

The WW collector is in for a treat, as, to my knowledge, no 100% filled BB has ever been shown for all to see. Hopefully, if one uses Big Blue, or another album, or even stock pages/ books for one's WW collection, the view will inspire.

The pages shown are the '69 BB edition, but be aware that all BB editions from the "69 to the present provide fundamentally the same coverage, except for some page shifting.

Remember to click on a scan page image if one is interested in examining the stamps/issues more closely. That will enlarge the page image. The pages were scanned originally @ 300 dpi resolution, which should provide good detail.

If the scan page image is still not large enough for close examination within the browser window, one does have the option to download the image and examine in the original size.

And, I have also elected to present the page scan images from Big Blue as close-up horizontal page scan strips. As an example, the Afghanistan page 1 scan is followed by three horizontal strip close-up scans of page 1 - labeled 1a, 1b, and 1c. Clicking and enlarging the horizontal strip scan images into the lightbox/gallery viewer should give a much larger enhanced view, suitable for stamp detail identification.

Note that the close-up scan views will be presented for the Big Blue pages only. Bud's supplementary pages will not get the same treatment.

I expect we will publish 1-3 countries of Bud's BB over a three day period. A six day block is reserved for my own posts. The overall cycle will be nine days, then Bud's BB posts will appear again. (Obviously, this cycle plan will vary from time to time.)

An Index to the countries will be added to this BB Introduction post as soon as the country posts begin. There will be a readily accessible index link on the left side of the blog page if one wishes to review Bud's BB country posts.

If one does the mathematics, one can expect this will be a several year project. Yes, eventually we want the whole filled album published, but the journey... let's savor it!

And if a reader has questions or comments, please submit the observation in the "comments" section at the end of every post - including this one!, and either Bud or myself or both! will answer.


Index to Countries in Bud's Big Blue
(If the BB scan pages for a country have been posted, there will be a link.)

Comments appreciated!
Posted by Jim at 7:30 AM