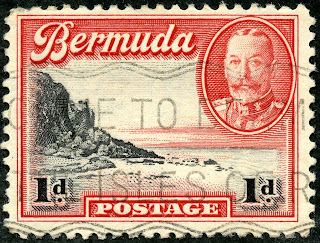 1936 Scott 106 1p carmine & black
"South Shore"
Into the Deep Blue
As most WW collectors know, the British colonies often provide two pictorial issues: towards the end of the George V reign (early 1930s), and then at the beginning of the George VI reign (1938 into the 1940s). The pictorial scenes are often duplicated with the two issues, but, for Bermuda, they are not.

As the engraved scenes, mixed with the bi-colored presentation, are quite attractive measured against the more usual staid definitive British colony stamps, I am going to present the 1936-1951 Bermudian examples here for everyone's enjoyment (Part B).

Bermuda
The Harbors, and places for ships to disembark:
Hamilton, St. George's and the Royal Naval Dockyard
Part A, the 1865-1934 stamps of Bermuda, is here.

The original blog post for Bermuda and the BB checklist is here. 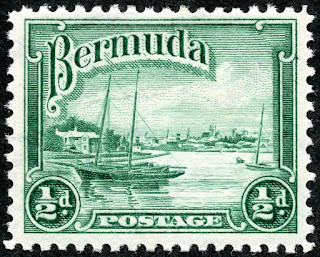 Fairly late in the game, on April 14, 1936 (after George V had already passed away), a nine stamp engraved pictorial set was released.  Of the six designs, two had an inset portrait of George V. 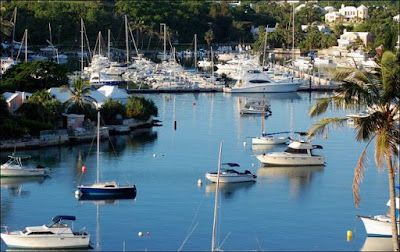 Hamilton Harbor
A natural harbor, the port area serves the capital city of Hamilton. Bermuda is surrounded by reefs, and it wasn't until after U.S. Independence ( and the loss of Naval bases along the Atlantic seaboard), that the narrows area was discovered that allowed fairly large ships passage way to Hamilton.

Today, most large cruise ships moor at the (former) Royal Naval Dockyard, and passengers use ferries to get to Hamilton. 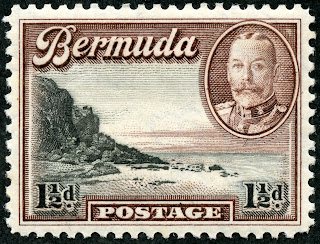 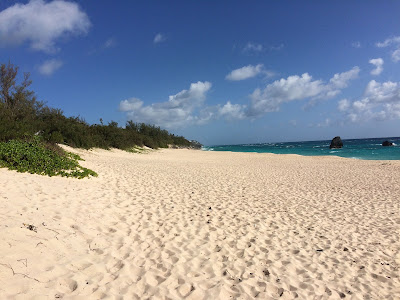 Warwick - Long Bay - South Shore
The beach sand is from the remains of shells, corals and clams. On the underside of Bermuda's coral reefs grows the dark red skeletal animals (Foraminifera) that give the sand that pink hue. 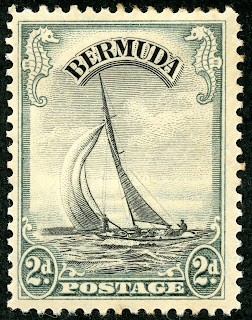 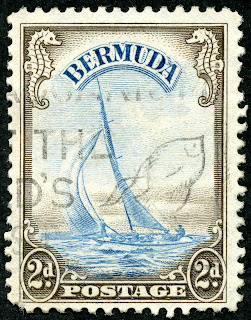 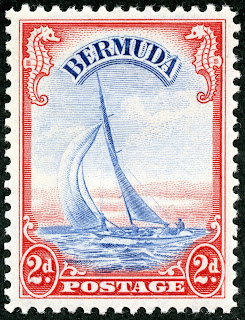 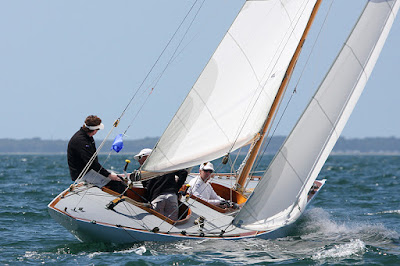 Lucie is still going strong
"Lucie", the last (and best) six meter, designed by Clinton Crane in 1931, had an outstanding racing record, lasting over seventy-five years. She was restored in 2006, and current owner Matt Brooks of the St. Francis Yacht Club of San Francisco * raced her in the 2011 World Cup in Helsinki (6th of 45 boats). She has placed first in International 6 Metre World Cups ("Classic" division) as recently as
2013.

* My middle daughter's wedding reception was there. Sadly, my only personal link to this iconic yacht club. ;-) 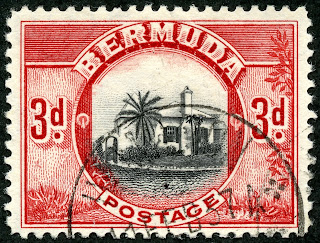 Scott calls the house scene on the 3p carmine & black "Typical Cottage", and no doubt it is, but Stanley Gibbons gives a discrete name: "Point House, Warwick Parish". 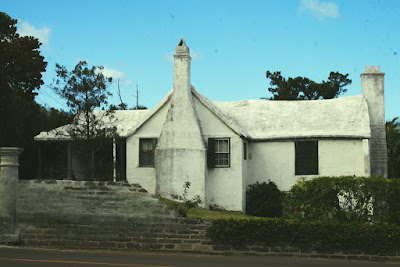 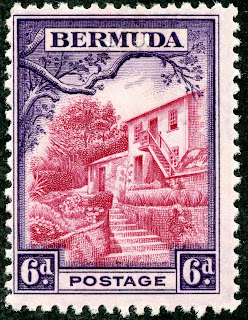 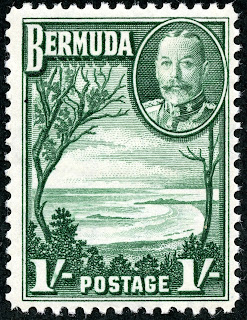 Grape Bay Beach
Although the beach itself is part of the public seashore, it is difficult to get there now, because of private properties limiting access. I'm sure it was much more accessible in 1936 when the stamp was issued. ;-) 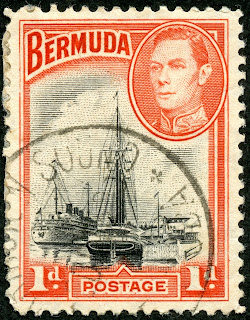 There were four designs, three of them new. The "Grape Bay" design, from the 1936-40 George V pictorials, was reused. 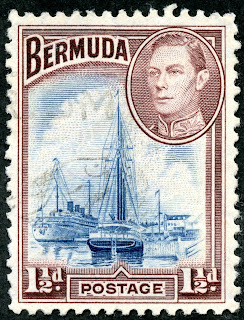 1938 Scott 119 1 1/2p violet brown & blue
"Hamilton Harbor"
If one follows the Stanley Gibbons, the above stamp is parsed into three shades and dates.

I don't put much credence in stamp shades in general, as often stamps can show shades that have more to do with environment (changelings).

But if a stamp shade is clearly linked to an issue date (as the SG does), then game on! 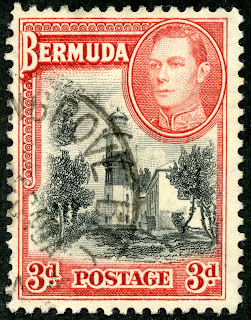 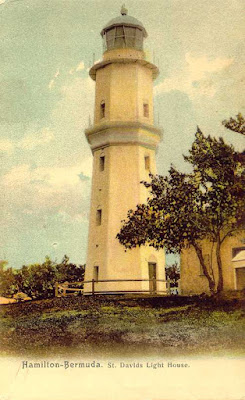 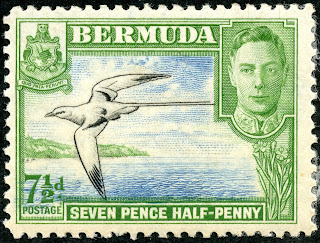 1941 Scott 121D 7 1/2p yellow green, blue & black
"Bermudian Water Scene and Yellow-billed Tropic Bird"
Lovely, lovely stamp! This is the scene that convinced me to do a blog post on the Bermudian pictorials! 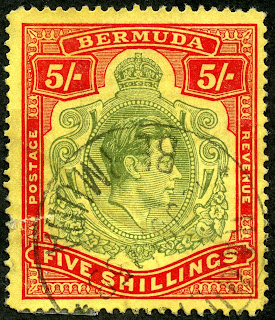 1938 Scott 125 5sh red & green/yellow
"King George VI", Perf 13
Between 1938-1951, the 2 shillings and higher denominations were represented by a large format "George VI" bi-color on colored paper. There were six stamps in the issue.  Revenue cancellations are also found on these stamps. CV is $8+-$70+. 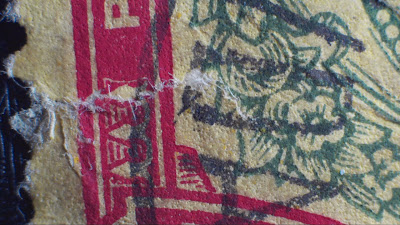 1938 Scott 125 5 Shilling Close-up
Digital Microscope
If one looked carefully at the 5sh stamp, one will notice a fault. Using my digital  microscope, the tear is quite evident. 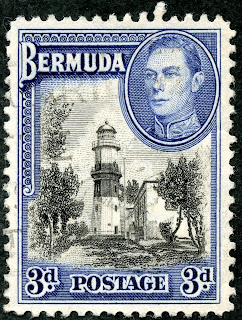 1942 Scott 121A 3p deep ultramarine & black
"St. David's Lighthouse"
Out of the Blue
It is fun, with these pictorials, to revel in the scenes, and perhaps learn more why they were chosen. This idle dalliance serves as a bit of a "vacation" from the more serious pursuit of philately. !! ;-)

Note: Map and pics appear to be in the public domain.