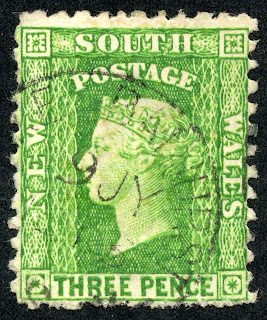 1882-91 Scott 63 3p green "Victoria"
Quick History
The HMS Endeavour and Captain James Cook sailed into Botany Bay (now part of southern Sydney) in 1770, and so named the area "New South Wales". The First Fleet of eleven vessels with 192 women and 586 men convicts arrived in 1788 to establish a convict settlement under Arthur Phillip, first Governor of New South Wales. By 1892, 4312 "professional criminals", 766 of them women, had landed at "Sydney Cove". Few had the skills needed to establish a colony. But today's Australian accent derives from the original cockney English spoken by the convicts. And survive they did- eventually forming Australia as we know it today.

In 1901, New South Wales joined with the other colonies to form the Commonwealth of Australia.

New South Wales between Victoria and Queensland
I should say something about the rivalry of Sydney and New South Wales with Victoria and Melbourne during the latter 19th century. The cultural differences exist even today, as was clear on our extended trip to Australia several years ago. Sydney- bold, brash, outgoing, sunny & surfers. Melbourne- cultured, cafes, much more "English".

What Australians have in common, though, is their love of sports. I became introduced to "Australian Rules Football" while staying with an Australian family, with whom we had become friends, when they lived in the U.S.. They were supporters of the Sydney Swans- even though they lived in Melbourne. It turns out that the Sydney Swans moved from Melbourne many years ago, but loyalty is forever. ;-) 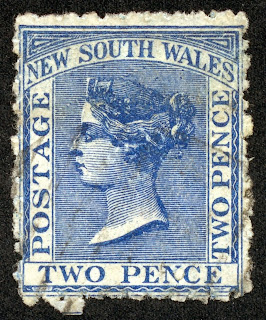 1882-91 Scott 62 2p blue
Into the Deep Blue
The 2011 Scott Classic Specialized catalogue has, for New South Wales 1850-1907, 198 major numbers. I should point out, though, that there are many more minor numbers based on different color, paper, perforations and dies. No doubt the "New South Wales" specialist parses the stamps quite finely, and, probably, the Stanley Gibbons would be a more appropriate catalogue.

Let's do a brief description of the earlier issues.

The first stamps, the so called "Sydney Views" were locally produced in 1850-51. Scott has them with 10 major numbers, but then adds some 79 minor number for color changes, plate differences, and paper differences. CV ranges from $240-$17,000. This is clearly the playground of the well off specialist. 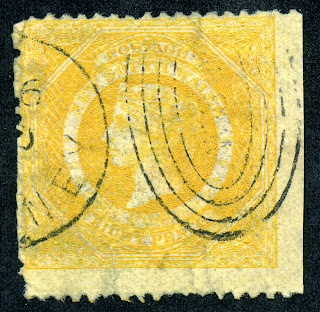 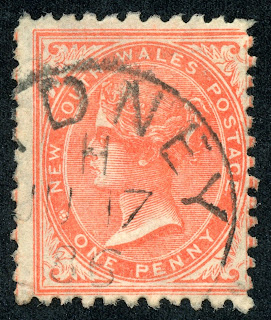 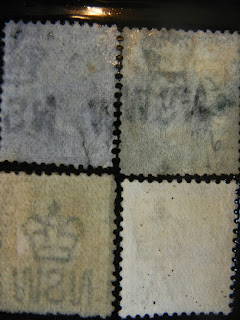 Top row: Wmk 54 "Small Crown and NSW"
Bottom Left: Wmk 55 "Large Crown and NSW"
Bottom Right: Wmk 12 "Crown and Single-lined A"
Shown above are the watermarks for the stamps illustrated for this blog post. Note the smaller vs larger crown difference for wmk 54 vs wmk 55. And wmk 12 has a single lined "A". 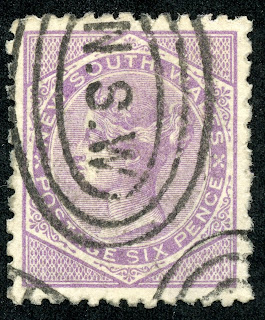 I should mention that the 1882-91 eight stamp issue also has numerous minor number perforation varieties. I counted 47! The CV for the issue is <$1-$20+. 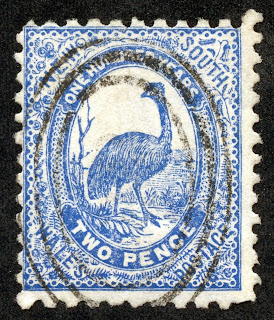 For the centenary of the first British settlement in New South Wales, a "One Hundred Years" inscribed six stamp issue was released. Each has a different design. Many consider these to be the first NSW commemorative stamps issued.

The Emu, native to Australia, is the second largest bird now in existence after its cousin, the Ostrich. 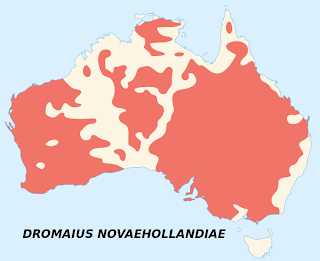 Distribution of the Emu in Australia
We found on our visit to Australia that the Emu was a common sight in Nature preserves outside of Canberra. 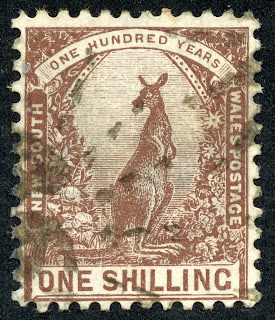 1889 Scott 82 1sh maroon "Kangaroo"
The iconic "Kangaroo" was featured on the 1 shilling stamp. When we would go to the parks or outskirts of Canberra at dusk, they would be as numerous as deer in Minnesota. And when those big brown eyes looked at you, well, it became quite difficult indeed to order 'Roo at the restaurants. ;-) 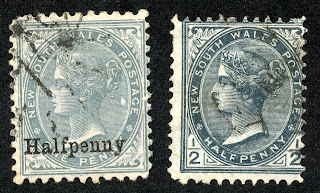 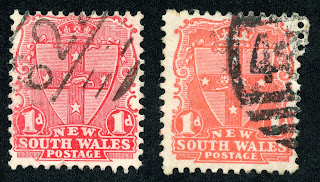 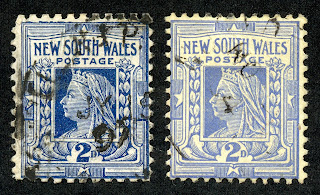 Honestly, not the most flattering portrait.

The deep purple actually is found with two Die types. One can have 16 radiating lines in the star on the Queen's breast (Die II- illustrated here), or 12 radiating lines (Die I). 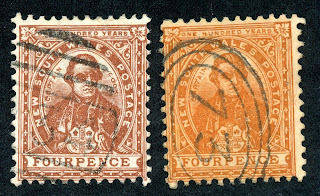 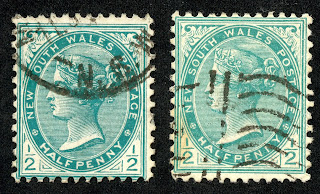 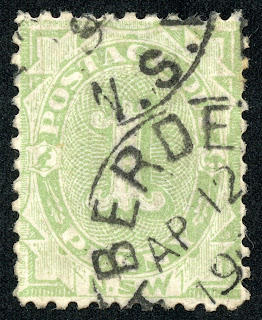 Looking remarkably like the U.S. postage due design (Coincidence? I think not ;-), ten stamps were issued for that purpose in 1891-92. 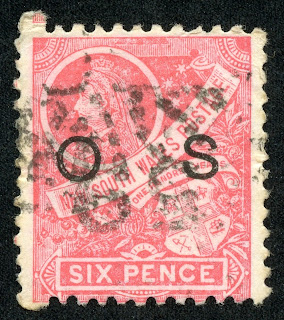 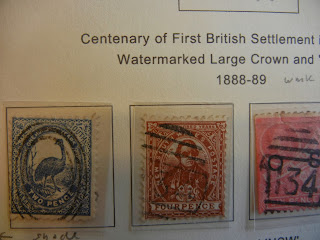 1888-89 Issue Stamps in Deep Blue
Deep Blue (Steiner) has 14 pages for New South Wales, and includes spaces for all the major numbers. If one was collecting in depth, especially the earlier issues with their numerous variations, the Steiner would need to be heavily supplemented. 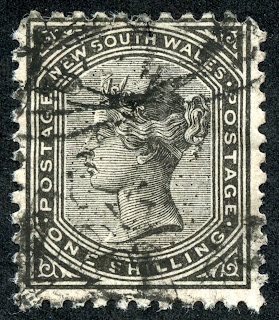 There are 18 stamps crossing the $10 CV threshold, with three in the "Most expensive" category ($37+-$50). See the listing in the comments section after the checklist.

If one examines the checklist, one will note there are often a LOT of choices for each space. Some are in the CV "hundreds" range, but for completeness sake, all are included. ;-) I did pick out the least expensive stamp if all the choices are CV $10+, and listed that choice in the comments section. 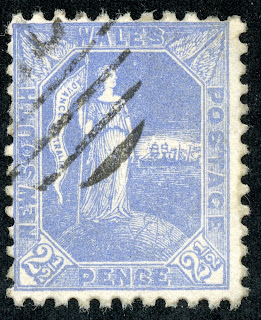 1890 Scott 89 2 1/2p ultramarine "Australia"
Out of the Blue
Back in the 1980s, when I rekindled my interest in stamps for awhile, I thought about specializing in the Australian British Crown Colonies. I still believe it would be a great choice. ;-)