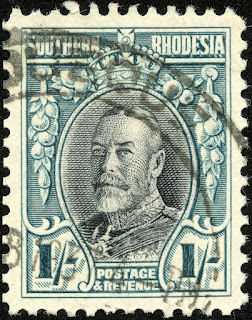 1931 Scott 26 1sh turquoise blue & black "George V"
Quick History
Before 1923, the territory was administered by the British South Africa Company. By way of history, BSAC, which governed and administered the lands by Royal Charter from 1889-1923, named the territory north of the Zambezi  "Northern Rhodesia", and the lands south of the Zambezi "Southern Rhodesia". Both territories were called by the white settlers, "Rhodesia", after Cecil Rhodes, the founder of BSAC. 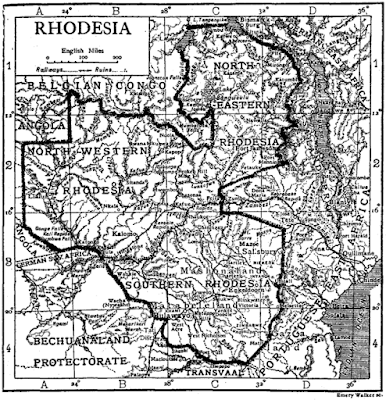 1911 Encylopaedia Britannia Map of Rhodesia
The Zambezi River bisects the lands into
Northern Rhodesia (North Western & North Eastern) & Southern Rhodesia
In 1923, the BSAC no longer administered the territories, and Southern Rhodesia (1924-1964), at the request of the inhabitants,  became a self governing crown colony. (To confuse things, it was known as "Rhodesia", -although not recognized as such internationally- from 1965-1979.)  With independence in 1980, it became Zimbabwe. 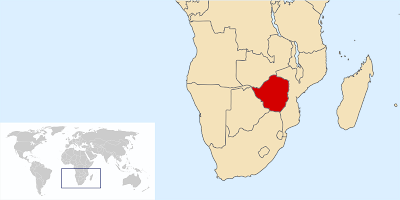 Southern Rhodesia
More precisely, a 1922 referendum showed 59% of voters favoring "responsible government" rather than joining the Union of South Africa.

Northern Rhodesia became a British Protectorate from 1924-1964. With independence in 1964, the name was changed to Zambia.

(My blog post for Northern Rhodesia has more maps and explanation of these turbulent times.)

At the same time, Southern Rhodesia (or "Rhodesia"), south of the Zambezi, was turned over to the white settlers, who established highly discriminatory laws against the black African majority, who outnumbered the white settlers By 10:1- despite an influx of 200,000 immigrants largely from the British working class between 1945-1970.

When Northern Rhodesia became independent as Zambia in 1964, the conservative white minority government of Southern Rhodesia unilaterally declared itself independent, and called itself "Rhodesia". The status was not internationally recognized, as it was clearly an attempt to continue with a discriminatory white policy.

The outlaw character of the country persisted until 1979, when the Constitution of Zimbabwe-Rhodesia was passed, and Zimbabwe was recognized as independent in 1980. 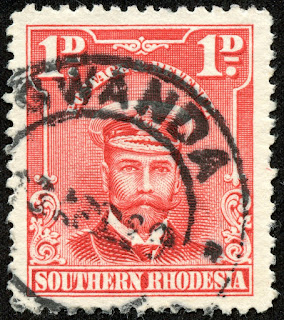 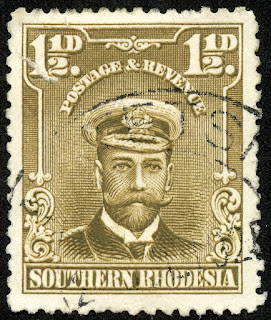 Without a doubt, this is one of the better "looks" for George V. 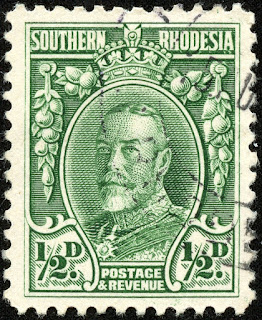 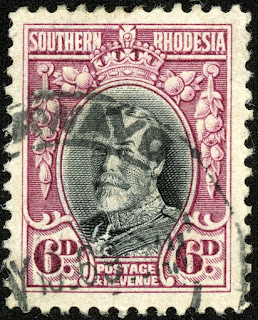 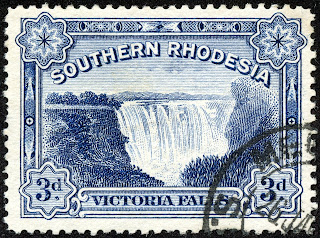 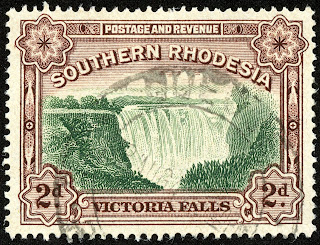 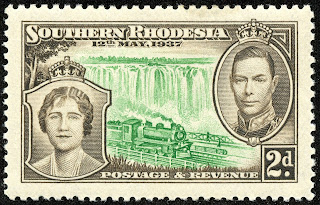 1937 Scott 39 2p brown & green
"Queen Elizabeth, George VI"; Coronation Issue
An interesting "Coronation Issue" (compared to most other British colonies with their use of the common design type) shows Victoria Falls with a train and "Victoria Falls" railroad bridge in the foreground. 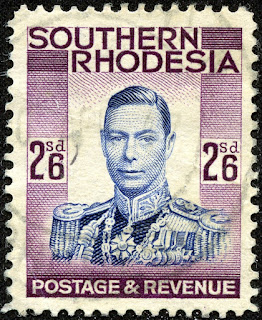 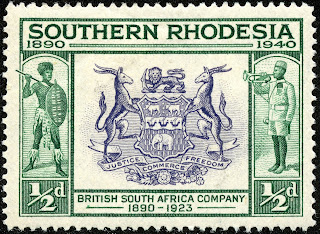 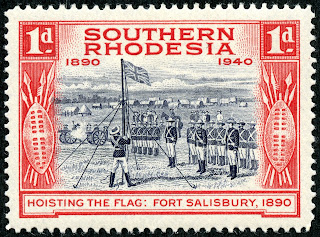 1940 Scott 57 1p red & violet blue "Fort Salisbury, 1890"
Named after the then British Prime Minister, the city was founded in 1890 by the Pioneer Column, in the service of Cecil Rhodes and the British South Africa Company. 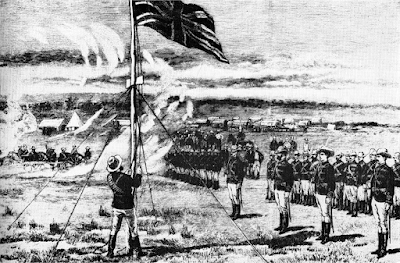 Hosting the Flag at Fort Salisbury on September 13, 1890 (Unknown Artist)
The Pioneer Column was used to obtain rights to the territory of Mashonaland and Matabeleland kingdoms within the future Southern Rhodesia- and quickly, before the Germans, Boers or Portuguese did. ;-) 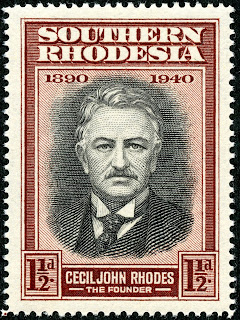 Cecil John Rhodes, very much an archetype of the British imperialist, believed in the positive benefits of colonialism. And to make himself rich through his businesses and mining. ;-)

If one reads the histories of the development of British South Africa, Cecil John Rhodes either is treated with "chauvinistic approval" or "utter vilification" (Quote from historian Richard A. McFarlane).

Certainly, one nice legacy, funded by his estate, was and is the Rhodes Scholarships. 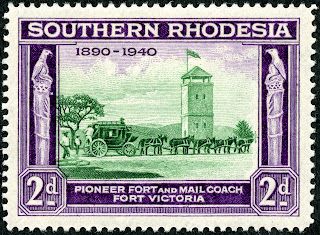 1940 Scott 59 2p purple & bright green
"Pioneer Fort and Mail Coach"
Fort Victoria was also founded by the Pioneer Column in 1890 on their way to Salisbury. 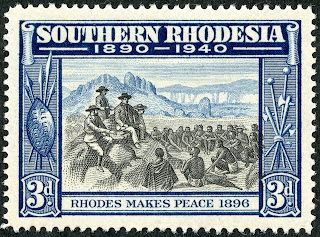 1940 Scott 60 3p dark blue & black
"Rhodes makes Peace, 1896"
The British South Africa Company had their own police force, which they used to control Matabeleland and Mashonaland. This lead to the First Matabele War (1893-94) against the Ndebele Kingdom, and the Second Matabele War (1896-97), also known as the Matabeleland Rebellion, against the Ndebele, and seperately, the Shona. 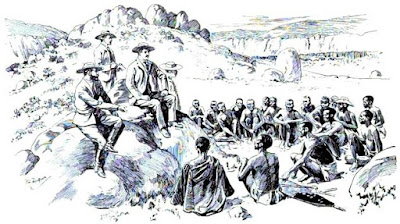 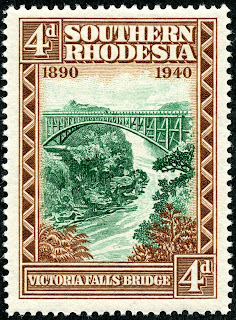 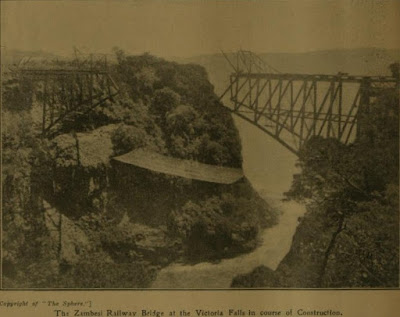 Victoria Falls Bridge, under construction, 1905
It was inspired by Rhodes's desire - never fulfilled- to build a railroad from "Cape to Cairo". He wanted the trains, as they went over the bridge, to "catch the spray of the falls". 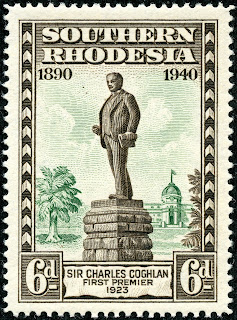 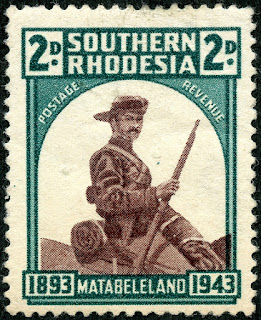 1943 Scott 64 2p prussian green & chocolate "Mounted Pioneer"
For the 50th anniversary of Matabeleland under British control, a stamp was issued in 1943 honoring the Pioneer Column.

Under the leadership of Frank Johnson, the 250 man force- chosen from the sons of local rich families to help insure British help if they should falter- were successful with their mission. The Pioneer volunteers were each awarded 3,000 acres and 15 mining claims. 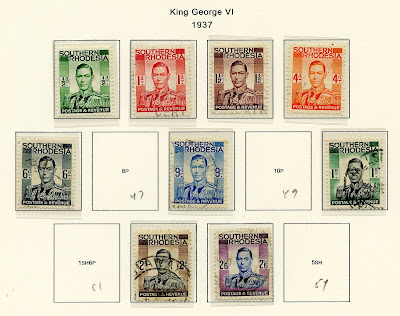 1937 Definitive Issue in Deep Blue
Deep Blue (Steiner) has seven pages for the stamps of Southern Rhodesia. The Steiner "classic" package pages include part of the regular issues of 1953 also, but not those of the Queen Elizabeth II era.

All Scott major numbers have a space. 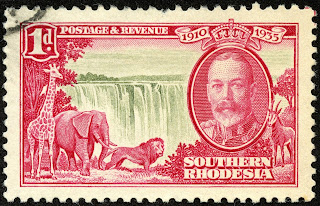 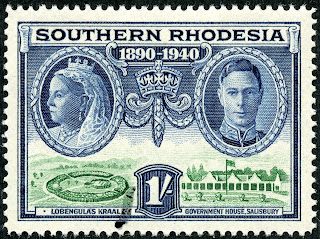 Note: Maps, drawings, and pics appear to be in the public domain.