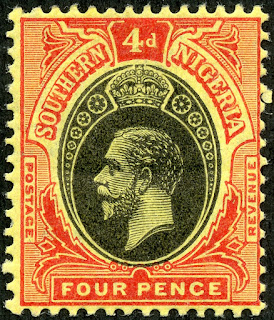 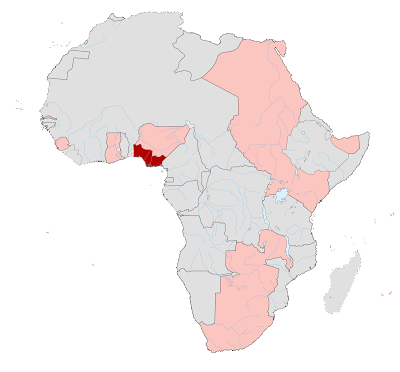 Southern Nigeria Protectorate, 1913
(Other British colonial and protectorate lands in pink)
The British chartered Royal Niger Company had held the lands along the lower Niger beginning in 1879. This prevented the Germans under Bismarck from entering and controlling the lower Niger in the 1890s. 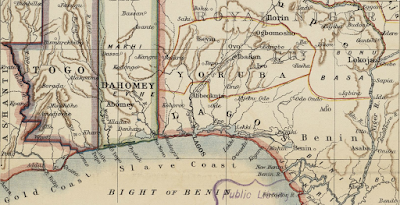 1898 Map showing location of Lagos and Royal Niger Company Lands
In 1906, Lagos colony was added, and the status was upgraded to Colony and Protectorate of Southern Nigeria. 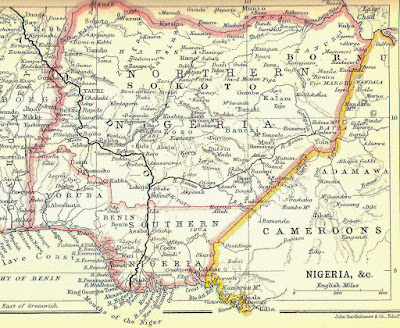 So ended the stamp issues of Southern Nigeria.

There were larger differences between the protectorates than their similar names and proximity would suggest.

Southern Nigeria had more economic development, western education was more prominent, and there was a large Christian missionary influence.

The north was more isolated, had a majority Islamic culture, and had been governed through Emirs. 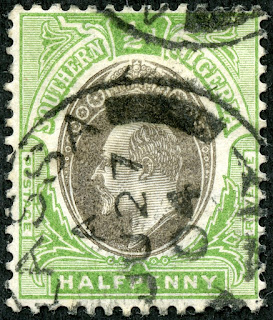 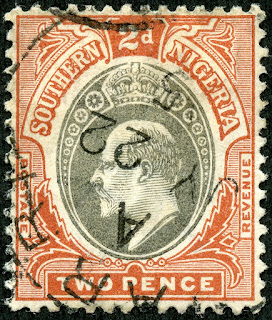 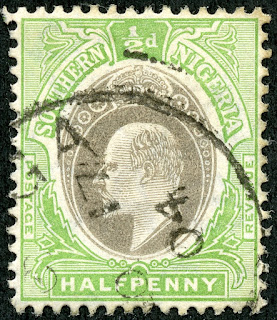 (If one needs a refresher on British Colonial watermarks, check the Gibraltar post.)

Most of the stamps of this issue can either be found on ordinary paper or chalky paper. Scott doesn't catalogue the CV difference, but SG does.

The issue can also be found with two dies of the Head plate- dotted line on cheek five lines up from chin (Die A) vs solid line (Die B). As I have no clear examples to show, consult SG for an illustration. 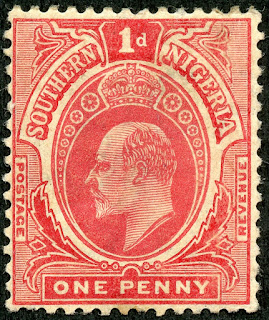 The 1p carmine for this issue has a thicker "1" and a shorter "d" for the "1d" numeral inscription. 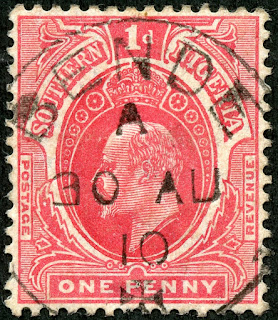 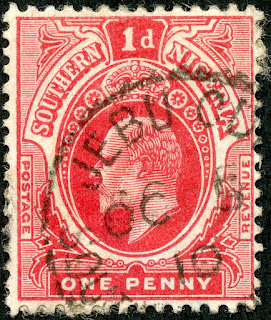 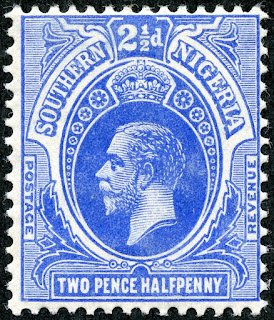 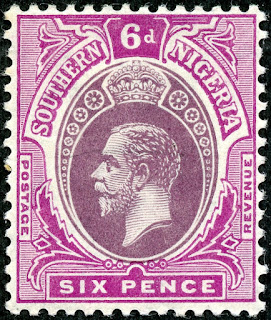 1912 Scott 51 6p red violet & dull violet "George V"
The higher denominations are bicolored, and most of the bicolored stamps (not this one) are also on colored paper. CV for eight stamps is <$1-$3+.

In 1914, the stamps of Southern Nigeria were replaced by those of Nigeria. 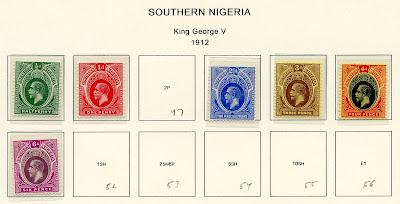 1912 "George V" Issue in Deep Blue
Deep Blue (Steiner) has three pages for the stamps of 1901-1912 Southern Nigeria, and offers a space for all the major Scott numbers. 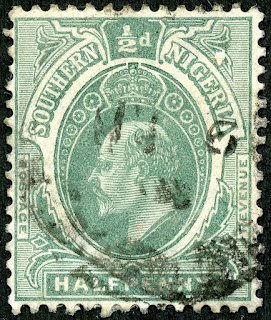 The country coverage is located between Somali Coast and on the same page as Southern Rhodesia.

There are no required stamps crossing the CV $10 level.

Coverage could have been a little more generous, as I count eight stamps @ CV <$1-$1+ that could have been added- and, that does not include the stamps where only one stamp among several inexpensive (different watermarked) choices can be put into a space. 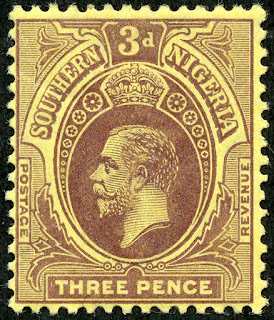 1912 Scott 49 3p violet/yellow "George V"
Out of the Blue
I can understand why British colony stamps are popular. They have a royal stately design that is the very definition of "classic". (I suppose one can argue, in their sameness, that they are also dull and monotonous- but, if so, why do they have appeal? ;-)

I especially like the British colonials that have a clear cancel from an exotic and forgotten location.