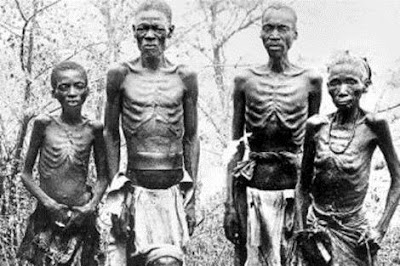 Many of Big Blue’s stamps have blood stains, none more so than those of German South West Africa.

Between 1904 and 1907, the German Empire almost completely exterminated the Herero and Nama people, leaving those who remained to starve in the Namib desert or interning them in concentration camps where they died. It was the 20thcentury’s first genocide. Sadly, many followed.

The “Herero Uprising” generated a grisly body of collectable military correspondence and postal history, much of it graphic and nearly all of it from the German point of view. Feldpost covers abound.

The stamps themselves are unremarkable, consisting of overprinted numerals and German eagles, followed by the Kaiser’s yacht Hohenzollern -- standard for German colonies.

Man was made to mourn: A Dirge
Robert Burns 1784

Many and sharp the num'rous ills
Inwoven with our frame!
More pointed still we make yourselves
Regret, remorse and shame!
And man, whose heav'n-erected face
The smiles of love adorn, -
Man's inhumanity to man
Makes countless thousands mourn!