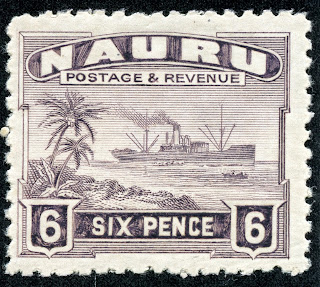 1937 Scott 25a 6p dark violet "Freighter"
Quick History
What can we say about tiny isolated Nauru?

This little oval shaped phosphate rock encrusted coral atoll is only 8 square miles in area, and is located in the South Pacific Ocean on the equator south of the Marshall Islands. It is surrounded by a coral reef, so only small boats may access the island. 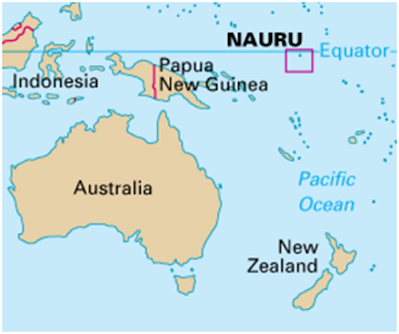 Location of Nauru in the Pacific Ocean
The original settlers were Micronesian and Polynesian. The island was annexed by Germany in 1888, and attached to the Marshall Islands.

As luck would have it- or curse-, Phosphate (From seabird guano) was discovered on Nauru in 1900, and eventually, 80% of the island was strip-mined. 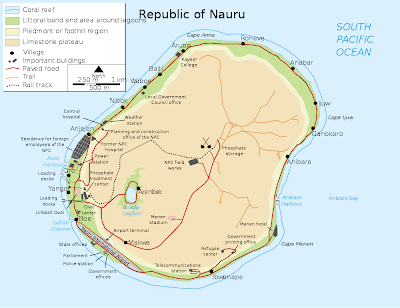 Map of Nauru
At the beginning of WW I in 1914, the island was captured by Australian forces. After WW I, the island was mandated by the League of Nations to Australia, New Zealand, and the United Kingdom jointly. Naturally, they also took over the phosphate mining.

Overprinted British stamps were introduced for Nauru, beginning in 1916. ( "North West Pacific Islands" overprinted Australian stamps were also used in Nauru during the occupation of WWI. )

The population was 2,600 in 1941, and the Yaren district is where the parliament building is located.

During WW II, Nauru was occupied by the Japanese, and was not liberated until 1945.

Nauru became independent in 1968 and joined the Commonwealth of Nations.

It relies on Australia for military defense- in fact, for significant economic aid. 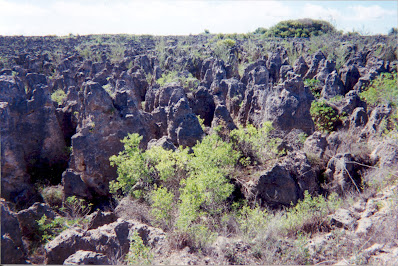 Limestone shard remnants after phosphate removed
Factoids
• Nauru was originally called "Pleasant Island". But the phosphate stripping has left an environmental disaster. Few native plants, birds, or animals remain. The entire interior of the island is off-limits to human habitation.
• The equatorial climate is hot and humid, with temperatures ranging from 72 degrees F at night to 95 degrees F during the day.
• Literacy is reported to be 96%, although the unemployment rate (since the demise of the phosphate industry) is quite high. 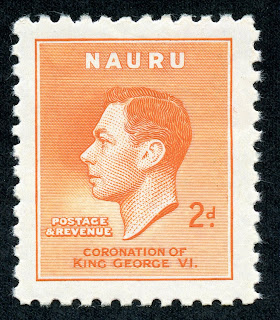 1937 Scott 36 2p dull orange "George VI"
Into the Deep Blue
The 2011 Scott Classic Specialized catalogue has, for Nauru 1916-48, 38 major descriptions. In addition, there are 14 bolded minor descriptions for the 1937-48 glazed surface white paper "Freighter" issue. With the major descriptions, there are only five stamps with CV of <$1-$1+ (13%). Raising the bar to up to $5, and including the bolded minor numbers, there are 26 stamps (50%). Clearly, Nauru is somewhat expensive for the WW classical collector. 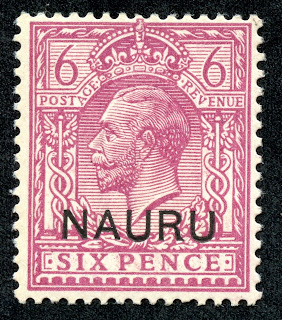 These are really "occupation stamps" because the Mandate from the League of Nations did not begin until 1923.

There are also seven stamps issued  with the overprint centered on the stamp. The CV is much more expensive, and I don't have any. ;-) 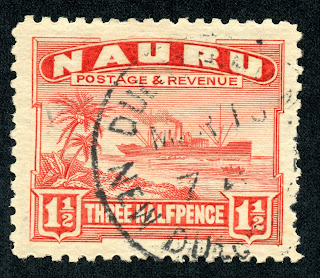 The Scott catalogue gives this issue major numbers. CV is $2-$10+ for 11 stamps. 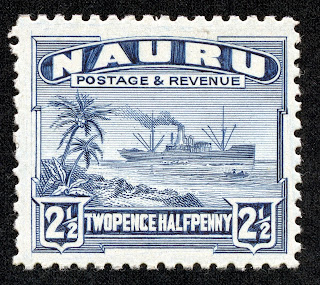 1948 Scott 21a 2 1/2p blue "Freighter"
Glazed surface white paper
Then, between 1937 and 1948, the fourteen stamp issue was continued, except the paper used was glazed surface white paper. This change in paper is given bolded minor numbers in Scott. The colors of the major and minor issue is the same, except the 3p pale blue major stamp is a 3p greenish gray color in the minor stamp. 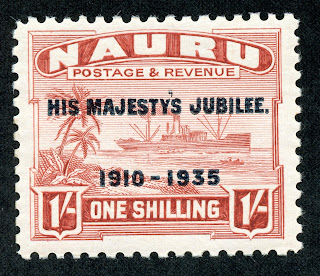 1935 Scott 34 1sh brown red, glazed paper
25th anniversary of the reign of George V
Of interest, Nauru did not receive one of the "Silver Jubilee" omnibus issues produced for most British colonies. Perhaps, that is because it was a mandated territory, shared by Australia and New Zealand.

A four stamp overprinted issue on glazed paper was produced, however, in 1935, to mark the occasion. 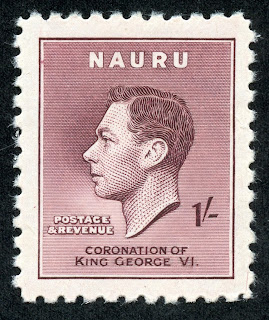 This set must have been widely distributed by the philatelic trade, as these stamps appear commonly in my feeder albums. 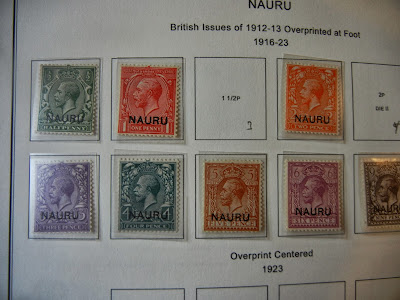 1916-23 British Issues of 1912-13 overprinted at Foot in Deep Blue
The Deep Blue album (Steiner) has four pages for 1916-48 Nauru. All the major Scott numbers are given a space. But the bolded minor numbers for the 1937-48 glazed surface white paper "Freighter" issue- some 14 spaces- are not given a space. Pity. I needed a quadrilled page for that issue. 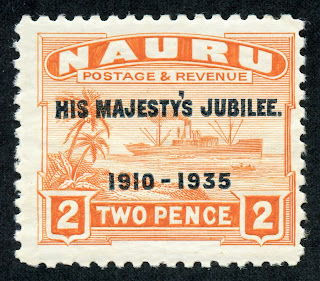 Observations
• There are two stamps with CV >$10. But, a number of the other stamps are in the $2-$6 category, so a bit more expensive to fill for the BB completest.
• One could put either the unsurfaced (1924-34) or glazed stamps (1937-48) in the "1924" "Freighter" issue spaces. The unsurfaced stamps are, though, more "true" to the intentions of BB. See the Comments section for an elaboration. 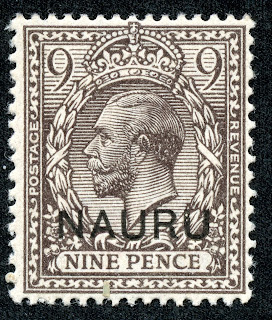 1916 Scott 11 9p black brown "George V"
1912-13 Stamps of Great Britian, overprinted at bottom
Out of the Blue
A coral atoll in the middle of the South Pacific Ocean would be an image of paradise for many of us.

The reality, with the phosphate dust hanging in the air, is, well,.....reality.

And little Nauru, the world's smallest republic, with the desperate lack of jobs, could use a little tourism.

Note: Maps and pics of the island appear to be in the public domain. 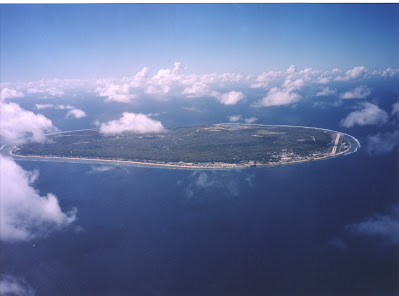