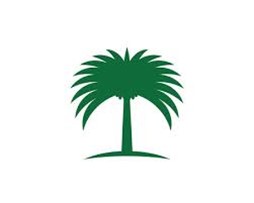 Oil Palm
Bud's Big Blue
Bud's Observations
British sailors and traders dominated the Oil Rivers area (the Atlantic coast along what is now Nigeria) long before formal colonization. From the 17th to the early 19th centuries they traded manufactured goods (tools, cooking utensils, weapons, as well as salt and rum) for slaves and looted artifacts. Millions of Africans were delivered into slavery and transported from such places as the Bight of Bonny to the Americas.

In 1807, Britain outlawed slave trading for all its citizens. Slave smuggling continued, sadly, but the economy and political power of the slave trade kingdoms, such as the Oyo Empire, declined severely when the “legitimate” slave market ended. Wars broke out and many of the Oyo themselves were smuggled into slavery. A reinvented but reduced economy emerged based on the export of palm oil, it being a machinery lubricant and a main ingredient of a beauty soap much desired in Europe and elsewhere (think Palmolive®). The delta’s rivers were lined with wild oil palm trees. 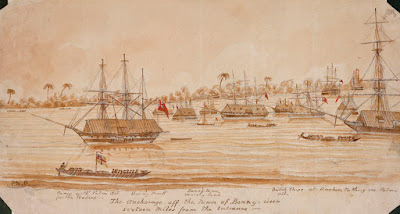 The Berlin Conference (1884-5) effectively ended the “European Scramble for Africa” by dividing up the continent among the colonizers. Britain was awarded the Oil Rivers area, the expansive and densely populated delta of the Niger river. No Africans were invited to or consulted by the Conference. Formal colonization ensued and, with it, the stamps: first for Oil Rivers (1893), then the Niger Coast Protectorate, Lagos, Northern and Southern Nigeria and, eventually in 1914, for an amalgamated Nigeria. The earliest post office can be traced back to 1852; it was an extension of the London General Post Office. (1) 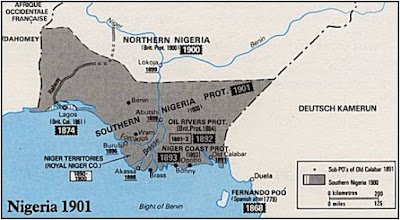 The stamps – Oil River overprints on British stamps and the series with Queen Victoria’s “widow’s weeds” image – are attractive but otherwise unremarkable. The cancellations, however, have potential for making and interesting collection. The various delta rivers had unique cancels – such as Bonny River and Old Calabar River. The scans in this post show cancels from these two and the Opobo River.

There are others; they tend to be more expensive than mint examples and those with unidentifiable cancels. Sometimes Royal Niger Company cancels can be found. For specialists, costly hand stamped surcharges and anomalies abound; watch out for forgeries.

I suspect that many of the mint stamps currently on the market never traveled to Oil Rivers, the high humidity there would have spoiled the gum. 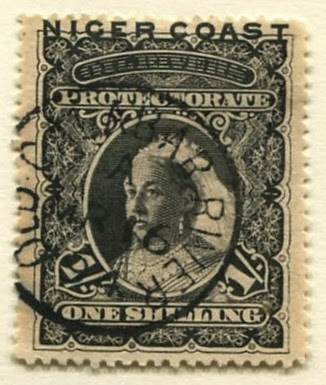 Scenic views of the Niger River can be found among the French West Africa stamps (see below). Even in the 1940s canoes propelled by sails and poles were still transporting oil to the coast. The canoe in #38 looks remarkably like those in the 19th century watercolor (above). 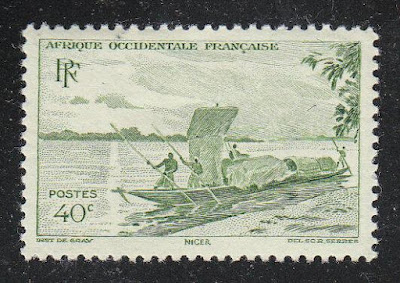 The Niger River’s course is odd. It begins on the east side of Guinea’s coastal mountains, then flows northward, then eastward through the western Sahara, then at Timbuktu southward toward Nigeria, and finally westward to discharge through the delta into the Atlantic. Early European cartographers were befuddled and mystified about it. African canoeists weren’t.

https://www.nipost.gov.ng/company_information
Jim's Observations
The handstamped surcharges of 1893 (31 stamps) and the the 1894 bisects and whole stamps surcharged (6 stamps) are CV $ hundreds- $ thousands, and out of the league of readers of this blog. ( I think ;-) Besides, Scott has a note about dangerous forgeries of all surcharges.But the 1893-1898 Queen Victoria stamps particularly ( 21 stamps) are quite lovely, in my opinion, and definitely worth a look.
Niger Coast Blog Post & BB Checklist
Page 1 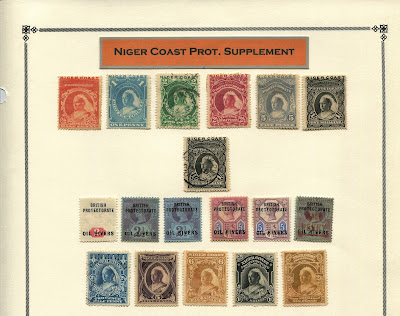