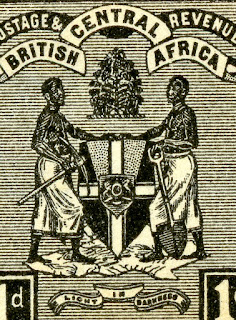 A motto “Light in darkness” (irony noted) is inscribed beneath a coat of arms on the 1895-96 stamps, although dropped from those that follow. Two Bantu men stand on tiger pelts holding European-style mining tools but, as it turned out, prospecting was bleak until the days of uranium and rare earth extraction. At the top is a tree where one might expect to see the likeness of Queen Victoria. Here my knowledge of British heraldry falters. It’s too symmetrical and frail to be a Baobab, the tree normally associated with the region. But it looks suspiciously like cannabis, a forerunner of today’s “Malawi gold”, the local name for export-quality pot.

I noticed, only when Jim pointed it out, that the space BB reserves for the 1895 1d has been occupied by a 2d and the 1d is stuck on the supplement page.

Census: seven in BB spaces, three on the supplement page.