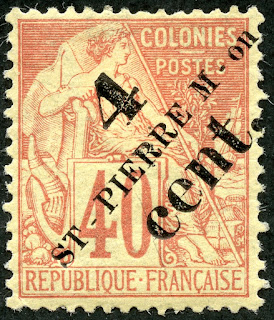 1891 Scott 45 4c on 40c red/straw
Stamps of French Colonies surcharged in Black
Into the Deep Blue
Additions to a collection are always intriguing to look at.

What did I pick up recently? Read on... 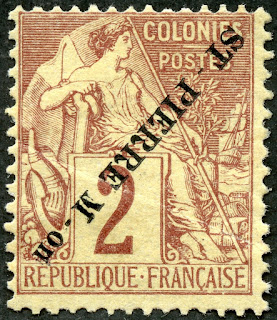 1891 Scott 21a 2c brown/buff
Inverted Overprint
Stamps of French Colonies overprinted in Black or Red
St. Pierre & Miquelon, off the coast of eastern Canada, and (now) part of France, has left a complicated (and expensive) legacy of early issues. The stamps of 1885-1891 (35 major numbers) are all handstamped, surcharged, or overprinted, and there were plenty of overprint variations that have entered the catalogue (see above).

Naturally, this is the playground of the well-heeled specialist. I am not that, but it doesn't mean I couldn't pick up a few examples.

There is a dealer in Oregon who has a nice selection of these stamps, and one Saturday in March of this year, I spent several pleasant hours in his shop (real brick & mortar!). 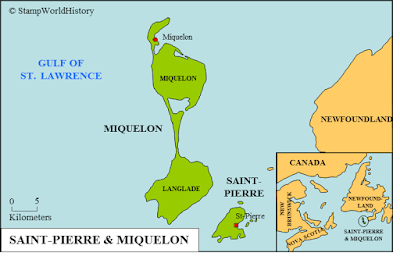 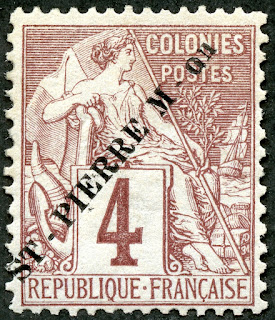 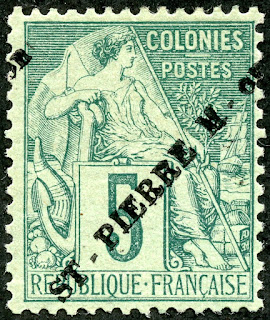 1891 Scott 25 5c green/greenish
Stamps of French Colonies overprinted in Black or Red
An example where the printing placement on the stamp causes some overlap (upper left).

I read somewhere that there was some shenanigans involved with all the availability of misprinted overprint stamps to the philatelic trade. Seems to not have harmed the CV though. 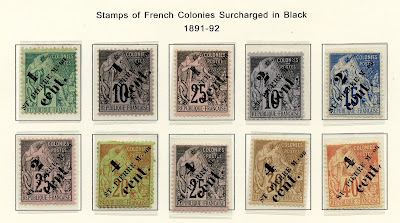 1891-92 Issue
Stamps of French Colonies Surcharged in Black
The 1891-92 issue (ten stamps) are from stamps of the 1891 overprinted issue, and an additional surcharge was applied in black. The header stamp for this post is from this surcharged issue. CV ranges from a modest $10+ to $20+. Again lots of variations known (double-triple surcharges, missing letters). 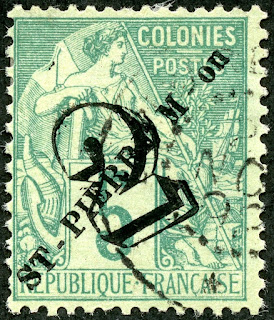 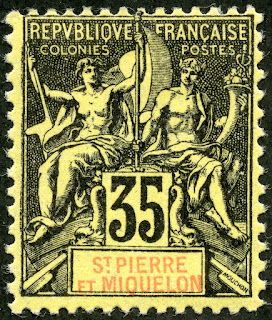 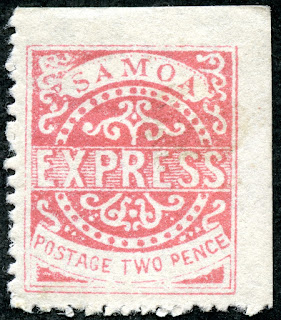 Express Issue - 2p Reprint
A local dealer had me look over a grouping of Samoa "1877-1882 Express Issue" stamps: I suppose in the hope that I would find a genuine. As usual, I found reprints and forgeries. In fact, I can't think of an issue where the dross to the gold ratio is more skewed: 90% reprints: 9% forgeries: 1% genuine.

For more background on this issue, see my original Samoa 1877-1899 & Forgeries post.

This poorly printed two pence example is either a Type IV (1882 2p lilac rose) or a reprint. Both have a spot of color below the "M". The reprints usually are perforated on all sides - this one obviously not. The Type IV is distinguished by the color of the stamp (lilac rose).

By the way, the 2p denomination only exists "unused", as it was never placed in use (Samoa Express service discontinued late 1891). 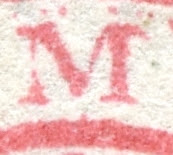 Note "Dot" below "M" on curved line
As one can see, the "Dot" indicates either a Type IV or a reprint.

So is this stamp a reprint or Type IV (CV $25)? Frankly, I don't know. Because it is poorly printed, and much more likely, I am labeling this a reprint until proven otherwise. 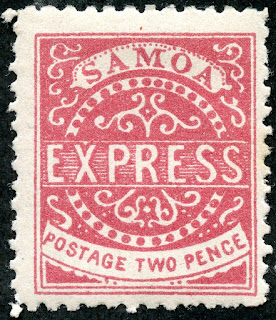 Express Issue -2p Fournier Forgery
I picked up another example of a Two Pence, but this is clearly a Fournier forgery.

"There is no dot of color under the center of the "M", so this is not a reprint. The right leg of the "M" is rather thick, and the pearl dots between the curved lines seem larger also.

Note the line above "X" is "roughly retouched", as if it is a Type III, but the horizontal lines along either side of the "X" are rough and thick.

The clincher is the colored pearl dot below the white line on which the "X" rests is not complete or surrounded by white! This is the necessary and sufficient sign that the stamp is a Fournier counterfeit." 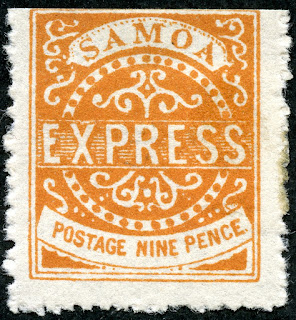 Express Issue - 9p Reprint
Here is another example where one has to make the best (probable) guess. This could be a Type IV, a reprint, or a Fournier forgery. The colored pearl dot below the white line on which the "X" rests is not complete or surrounded by white, which suggests Fournier, but I also see a dot below the "M" (not seen with Fournier).

Nine Pence Close-up
Note "Dot" below "M" on curved line
I think then that this is a reprint most likely. I would need to send this in for expert analysis if I thought Type IV (CV $75). 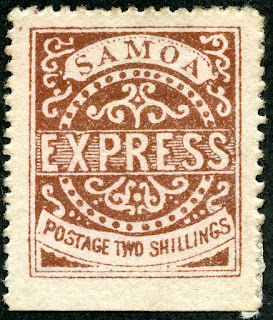 Two Shillings close-up
Note "Dot" below "M" on curved line
Note the dot on the curved line. The 2s denomination is not found as Type IV, so this must be a reprint. 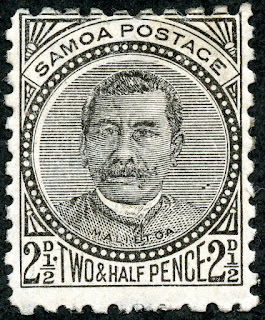 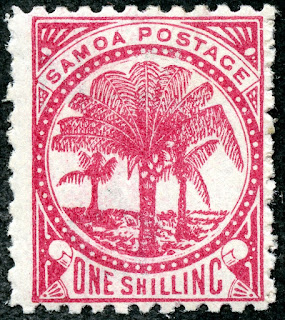 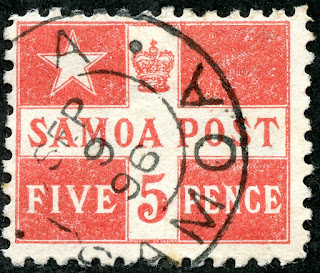 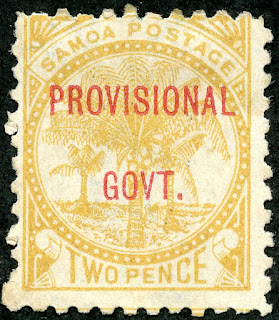 I had the major number 2p "bright orange". I think, though, this example is the minor number "deep ochre". Both are CV $2. 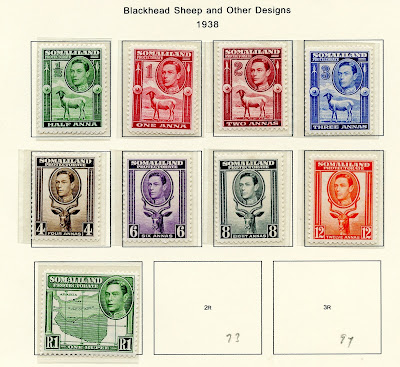 1938 Somaliland Protectorate Issue
Although I put my stamps into Deep Blue (Steiner pages), I'm always on the lookout to add to my virtual Big Blue collection in which I have 30,000+ spaces filled out of 34,000+ total spaces. All nine of these stamps are in Big Blue, and hence I added them from an internet sale site. 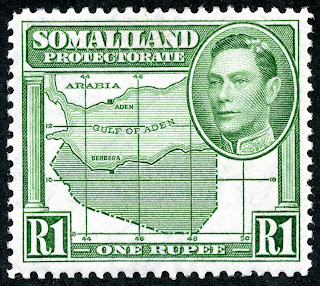 1938 Scott 92 1r green
"Map of Somaliland Protectorate"
It is always instructive to show a map stamp, especially for an obscure classical era territory. 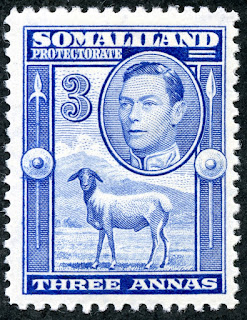 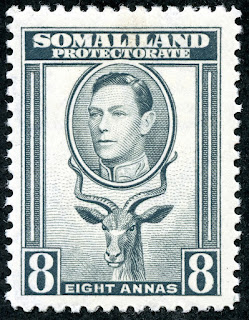 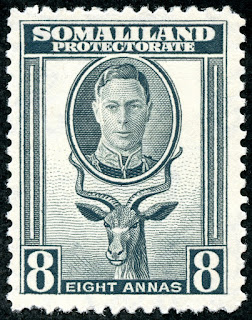 Japan's early stamps, the 1871 issue "Pair of Dragons Facing Characters of Value", the 1872 issue "Dragons and Denomination", and the 1872-73 & 1874-75 issues "Cherry Blossom" are an absolute nightmare for the WW collector because of numerous and excellent forgeries. Do not even consider collecting these stamps without specialty literature on forgeries.

I have the International Society for Japanese Philately monographs on The WADA Cherry Blossom Forgeries (1974- Tyler & Montgomery), The Koban Forgeries of Japan (1979- Wilhelmsen & Tyler), and the SPA handbook Characteristics of Genuine Japanese Stamps Cherry Blossom Issues of 1972-1876 (Varro Tyler).

Frankly, these monographs have been superseded by The International Society for Japanese Philately Forgery CD (All known forgeries up to 2002).

One can obtain the Forgery CD for $48, which includes a one year membership in the Society. 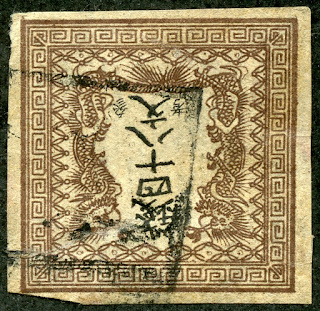 According to my notes, this stamp (above) is a WADA Plate A forgery, mimicking Plate II. 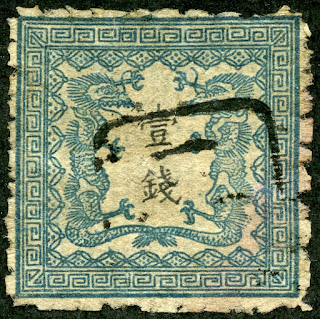 "1872 Scott 6 1s blue (II) WADA Forgery
"Dragons and Denomination"
And this stamp (above), according to my notes, is a WADA Plate A with Sanko forgery mimicking Plate I.

So, what's the current problem? I can't find the CD! It's buried somewhere in my possessions. When I do, I will elaborate further on why these are WADA forgeries. ;-)

Since the 1871 & 1872 issues have a fairly high CV of $130+ to $650+ for major numbers (minor numbers -mostly shades - are more), a strategy would be to eliminate the plentiful WADA forgeries for these issues by using the CD, and then submitting any remaining genuine possibilities for certification. 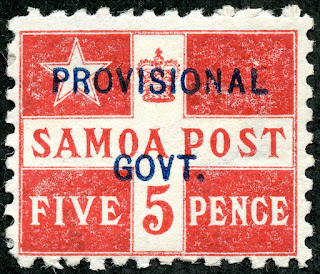 1899 Scott 35 5p deep scarlet
Blue Overprint
Out of the Blue
I hope you enjoyed this little excursion into recent acquisitions.