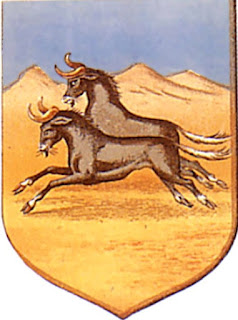 Natal, so named because Vasco da Gama sailed by there on Christmas Day, 1497, and because Natal is the Portuguese word for Christmas, rested pretty much undisturbed by Europeans until the 19th century, except for a series of shipwrecks along the coast and occasional hunting parties. Then, in July 1824, the British started a settlement.  They wanted trade in ivory, hippo tusks, buffalo hides, cattle and grain.

Although Natal’s stamps adhere strictly to British colonial protocol (crowned heads, usually key types or key plates) and show nothing of what 19th century life might have been like at the southern tip of Africa, matching key events the colony’s history with its postal history requires very little imagination.

Shaka, the Zulu King who controlled the area surrounding what became Port Natal (Durban), initially welcomed the settlers and ceded them about fifty miles of coastline for their use. When the settlement ran short of medicines, the Zulus escorted the colonizers’ scout to Delgado Bay to get supplies. This era of good feeling was short lived. 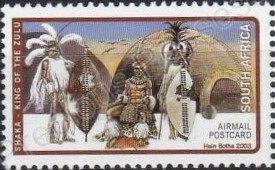 By 1850, when the first Durban post office opened, the fledgling colony was prospering. Trade was good. Dutch families started farming the surrounding area. Meanwhile, relations with the Zulus had been souring. Shaka had died (1828), assassinated by his half-brothers, and, as early as 1835, Zulu resistance to the growing British hegemony had resulted in fierce attacks on settlements. At one point, Durban had to be evacuated.

Having been proclaimed a separate British colony in 1856, Natal produced its first stamps in late Spring 1857. These have embossed British crowns on colored paper and can be found online and at stamp shows, but the price normally exceeds $100 for perfectly stuck examples. So, I’ve settled for a cheap Cinderella that resembles Scott #1 (no embossing). 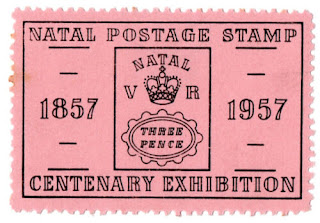 Engraved stamps issued during the 1860s, a time of increasing economic hardship in Natal, have the image of Queen Victoria commonly used in British colonies. In 1859, Natal’s Parliament had passed a “Coolie Law” making it possible to bring in much needed Indian workers for five-year indenture contracts. But, by 1866, all immigration stopped because of the poor economy and, sadly, indentured workers were being poorly treated by White farmers. Durban installed street lights in 1864 although, by 1867, the city could no longer afford oil for them. 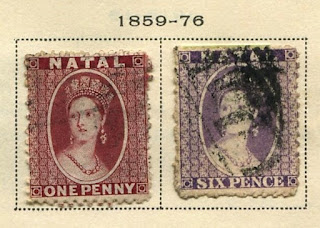 During the early 1870s, the original engraved stamps were frequently overprinted, a practice that often connotes political and economic turmoil. The overprinting may have been undertaken merely to distinguish postal from fiscal usage. The turmoil, however, stemmed from ever deteriorating relations with the Zulus. As Natal’s first typographed stamps were being introduced (1874-1880), matters worsened to the point that the Anglo-Zulu War broke out, and the British were soundly defeated at the battle of Isandlwana (January 1879). Over 2500 of the Queen’s soldiers died.

The British quickly retaliated. The Anglo-Zulu War continued until the Zulu’s were decisively defeated at the second Battle of Ulundi, 21 July 1883. This warfare ended, in effect, the traditional Zulu Kingdom. The British cemented control by establishing the separate colony of Zululand, marking the occasion by issuing the Zululand stamps placed at the very end of our BB albums. After a few years, Zululand was incorporated into Natal (1897).

Through the 1880s and 1890s, new Natal stamps consisted of additional values of Queen Victoria key plates and more overprints of earlier issues.

At the same time, Indian citizens grew increasingly concerned about their diminishing rights in Natal. They brought in a London-trained lawyer to help them. The Registration of Servants Act No. 2 of 1888 classified Indians as members of an “uncivilized race.” Free Indians were forced to carry passes or be arrested. The lawyer, Mohandas Karamchand Gandhi, planned to stay only a few months after his arrival in 1893, but ended up living there for over 20 years. He came to think of himself as being South African as well as Indian. At the time of Gandhi’s arrival, Whites were outnumbered by Indians in the colony.

Gandhi was living in Durban when the stamps with Edward VII’s image were issued (1902-08), Natal’s final series. Natal joined with the Cape Colony, Orange Free State, and Transvaal in 1910 to form the Union of South Africa. 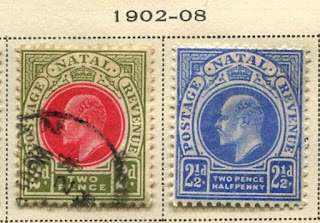 A few years ago I had a brief audience with the current Zulu King, His Majesty Goodwill Zwelithini kaBhekuzulu, at his palace in Nongoma. A descendant from one of Shaka’s fratricidal brothers, His Majesty delights in recounting how his people handed the British army its only defeat in all African history (Isandlwana).

I had to interrupt the King’s recitation, however, because I was sick -- two flat tires getting to Nongoma on unbelievably washboardy dirt roads and a nearly empty gas tank had frazzled me. His Majesty was displeased.

And he reported, regrettably, no gasoline was to be found in Nongoma. And he had no interest in stamp collecting. 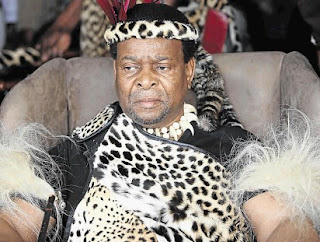 He wore a business suit when I was there.

Roads departing from Nongoma were even more dreadful. We had hoped to spot black wildebeest along the way but, instead, we ran out of gas in an extremely remote area. Friendly Zulus, pitying our plight, brought us gasoline in milk bottles and delicious pineapples that they sliced up with their machetes.

Ton Dietz, former director of the African Studies Centre at Leiden University, has written extensively about the stamps of Africa, including Natal, as an adjunct to his broader interest in African development.  Dietz observes that “Postage stamps, postcards, and other forms of postal heritage are miniature communication tools and tell stories about places, routes, and times.” See his 95-page paper on colonial Natal stamps with extensive illustrations copied from on-line auction catalogs and other sources: https://scholarlypublications.universiteitleiden.nl/access/item%3A2939025/view.

Census: 25 in BB spaces including three of the six official stamps (Edward VII profile), three tip-ins, 24 on the supplement page. 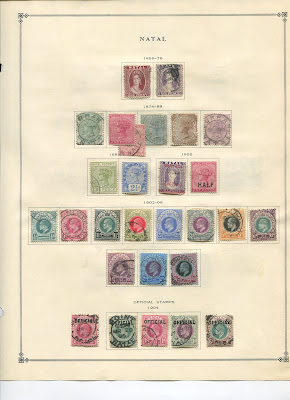 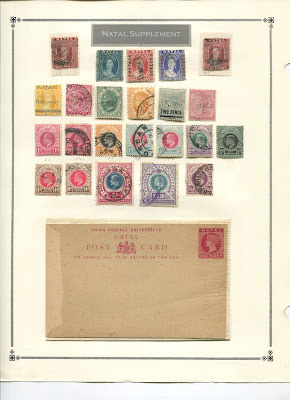