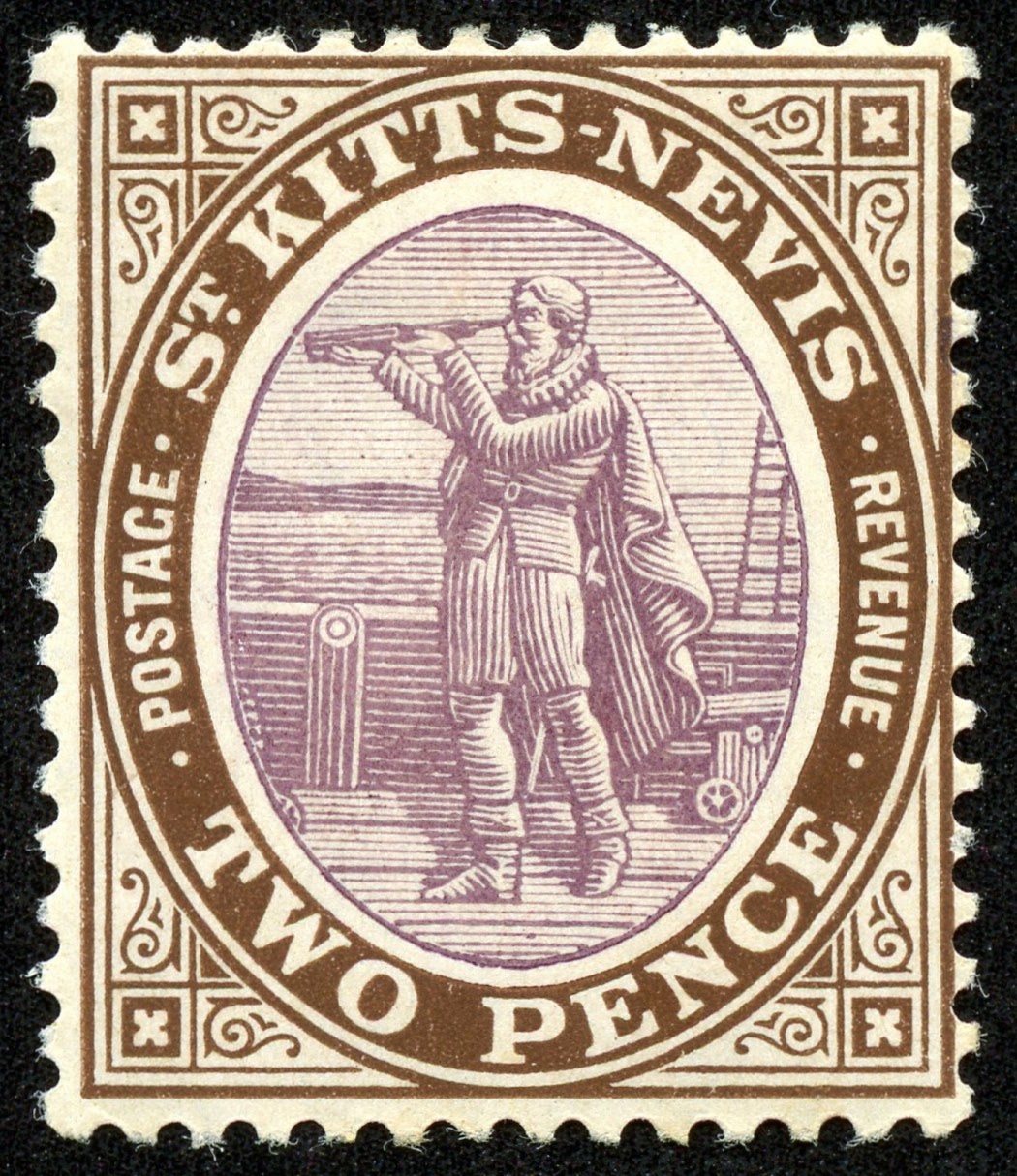 1905 Scott 15a 2p brown & violet
"Columbus Looking for Land"
Quick History
St. Kitts-Nevis are two islands in the West Indies separated by 2 miles ("The Narrows"). St. Kitts- a common nickname for Saint Christopher in the 17th century- and Nevis (Original Spanish "Nuestra Senora de las Nieves"- "Our lady of the Snows") were both Presidencies in the British Leeward Islands Colony. 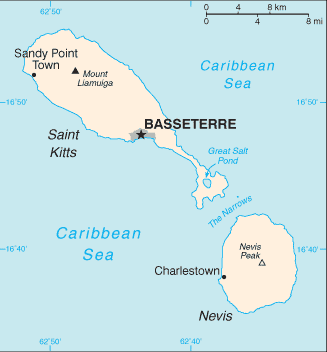 Saint Kitts and Nevis
Nevis issued their own stamps from 1861-1890. These were replaced by stamps of the Leeward Islands from 1890 to 1903. From 1903 to 1956, Stamps of St. Kitts-Nevis and Leeward Islands were issued concurrently.

St. Christopher (Kitts) issued their own stamps from 1870-1890. Stamps of the Leeward islands were then used exclusively from 1890 until 1903. Likewise, from 1903 to 1956, Stamps of St. Kitts-Nevis and Leeward Islands were issued concurrently.

As I have published blog posts already on....

Consult them for more background history and maps, and their stamp issues.

When St. Kits-Nevis were brought together as an administrative (Presidency) - and philatelic entity- in 1903, as they were only two miles apart, that had to be a logical and happy union, right?

They each had their own history with their own specific identities, and they had to be, more or less, forcibly united.

The Presidency included the island of Anguilla.

Sugar export from extensive sugar plantations dominated the economy well past the 1940s.

People of African descent (75%) are the largest demographic portion.

Anguilla separated from the others between 1971 and 1980 (Yes, it took that long).
In 1980, Anguilla became a separate British Crown colony ( Now a British overseas territory).

In 1980, separate postal administrations were developed for St. Kitts and Nevis, respectively, and different issues were produced; although they remained one nation.

St. Kitts and Nevis became independent in 1983, the smallest sovereign state in terms of population and land size in the Americas.They are a member of the British Commonwealth.

Old resentments continue to smolder. In 1998, a referendum in Nevis to separate from St. Kitts did not receive the required two-thirds majority vote. 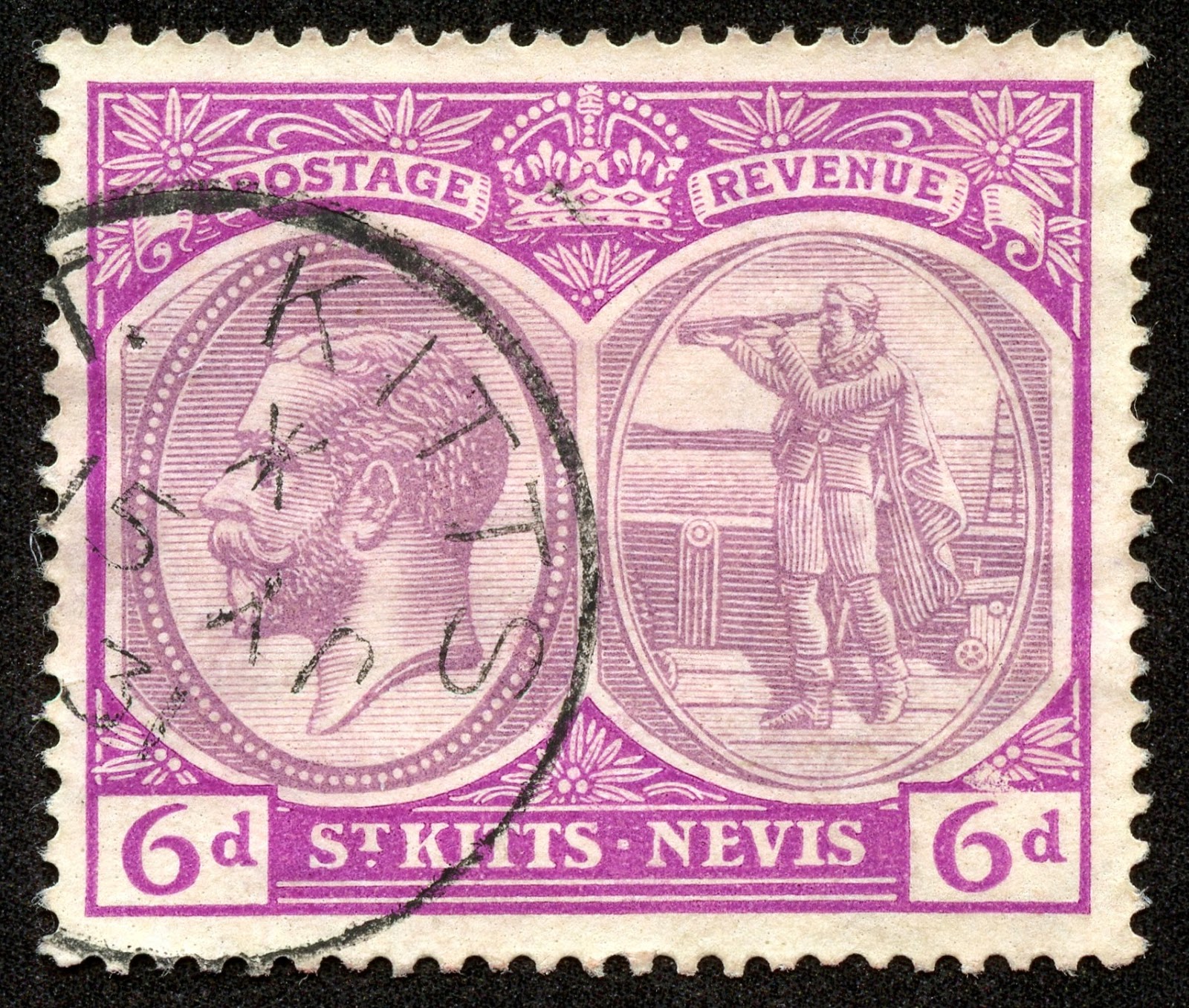 As usual for a British colony, the British colonial watermarks are important for identification. The previous post for St. Helena has pics of the watermarks if one needs a refresher. 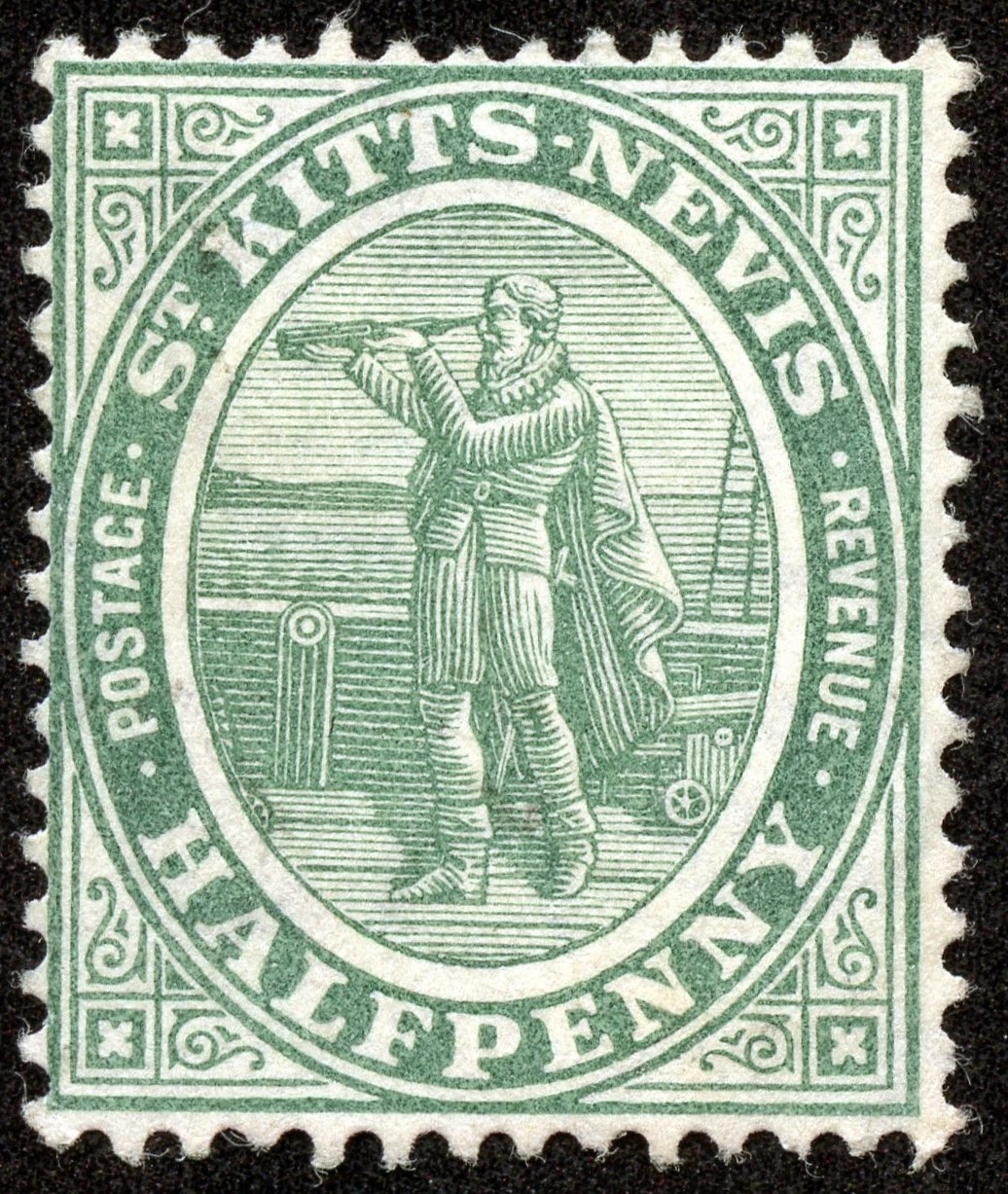 1916 Scott 12a 1/2p dull blue green , Wmk 3
"Columbus looking for Land"
Apparently using a telescope that was not developed for another 115 years!
The 1903 ten stamp issue is wmk 2 "Crown and C A", and shows two designs: "Columbus looking for Land", to honor St. Kitts and the Columbus discovery during his second voyage, and "Medicinal Spring", to honor Nevis. I happen to not have any of the 1903 issue, even though two stamps are CV <$1.

An example of the "Columbus looking for Land" design on a 1916 1/2p dull blue green is shown here.

St. Kitts was known initially as San Cristobal by the 17th century, as it is thought that is the name that Columbus gave the island in 1493. (There is now debate about that.) San Cristobal is the patron saint of Christopher Columbus, and also the patron saint of traveling. When the island was settled by English colonists in 1623, naturally the island was called Saint Christopher (and Saint Christophe for the French colony established in 1625). 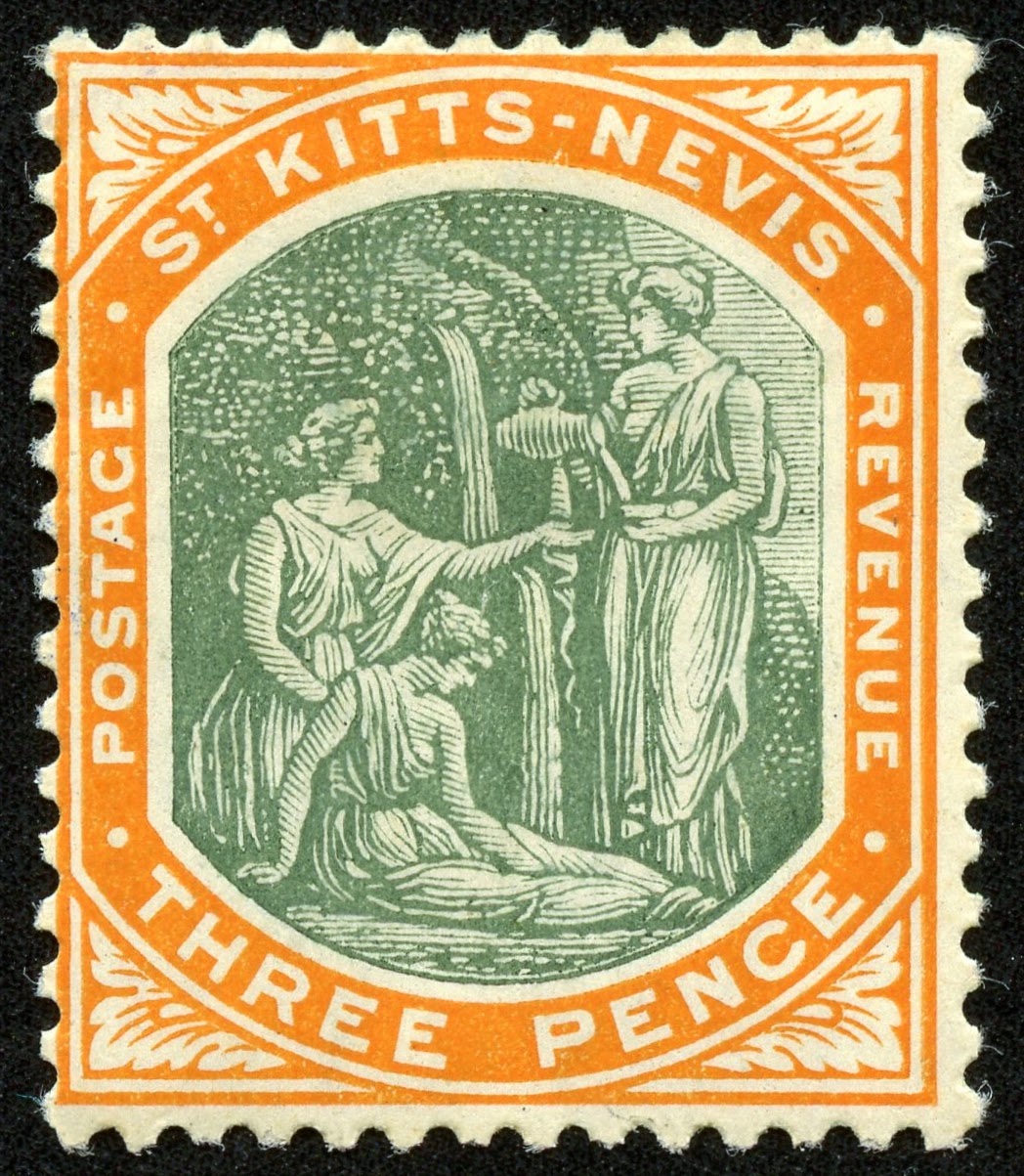 In 1778, the Bath Hotel was built to take advantage of the hot springs on Nevis. This, interestingly, was the first attempt at "tourism" in the Caribbean. 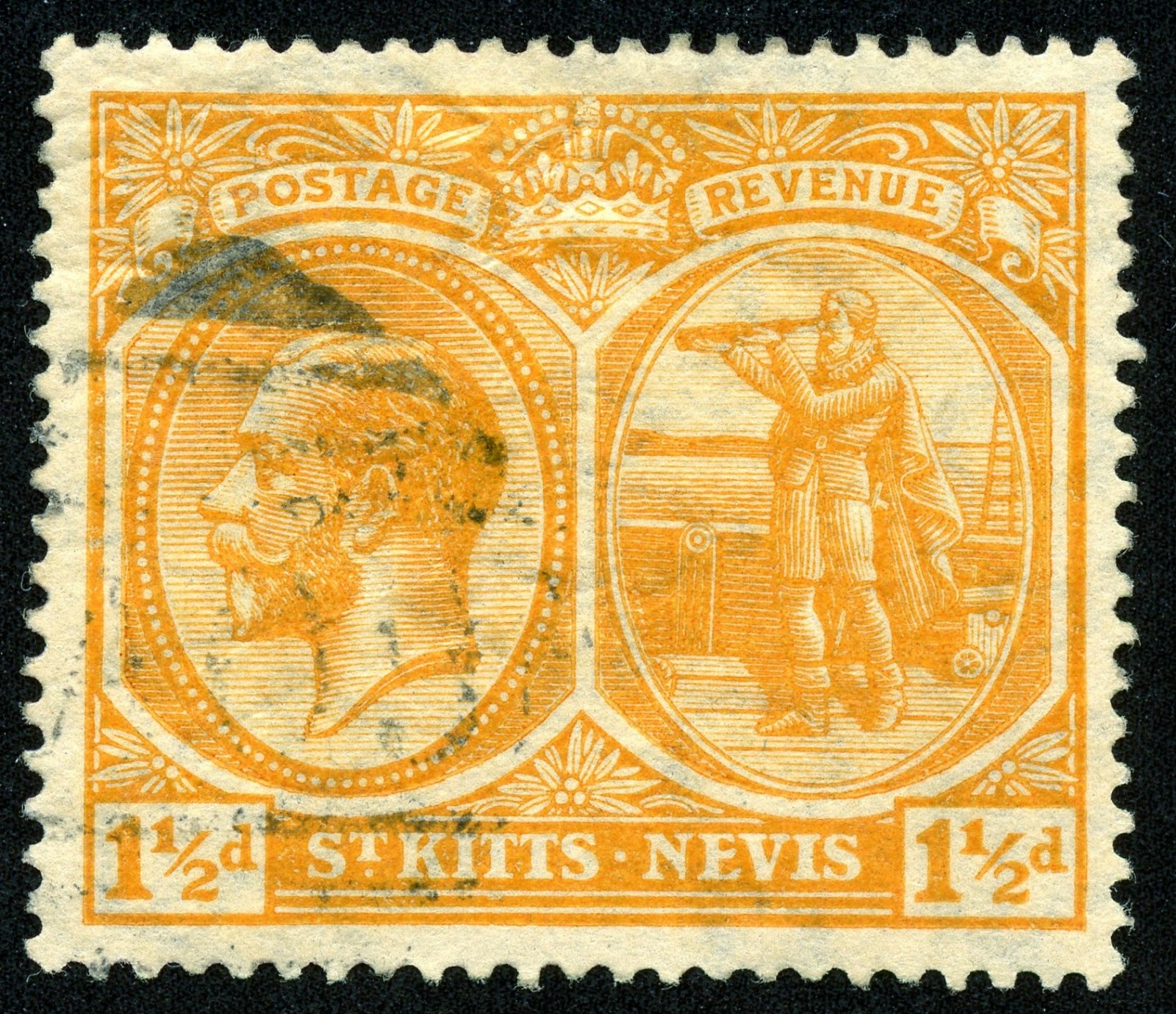 Take a close look Columbus. Is he looking through a telescope? Well, he can't be, because Galileo "developed" the refracting telescope in 1609.  It can't be a sextant, either, as that came into use around 1730. ;-)

Columbus used "Dead Reckoning" navigation, as did other sailors of the era. That involved using a magnetic compass, speed calculation, and time. 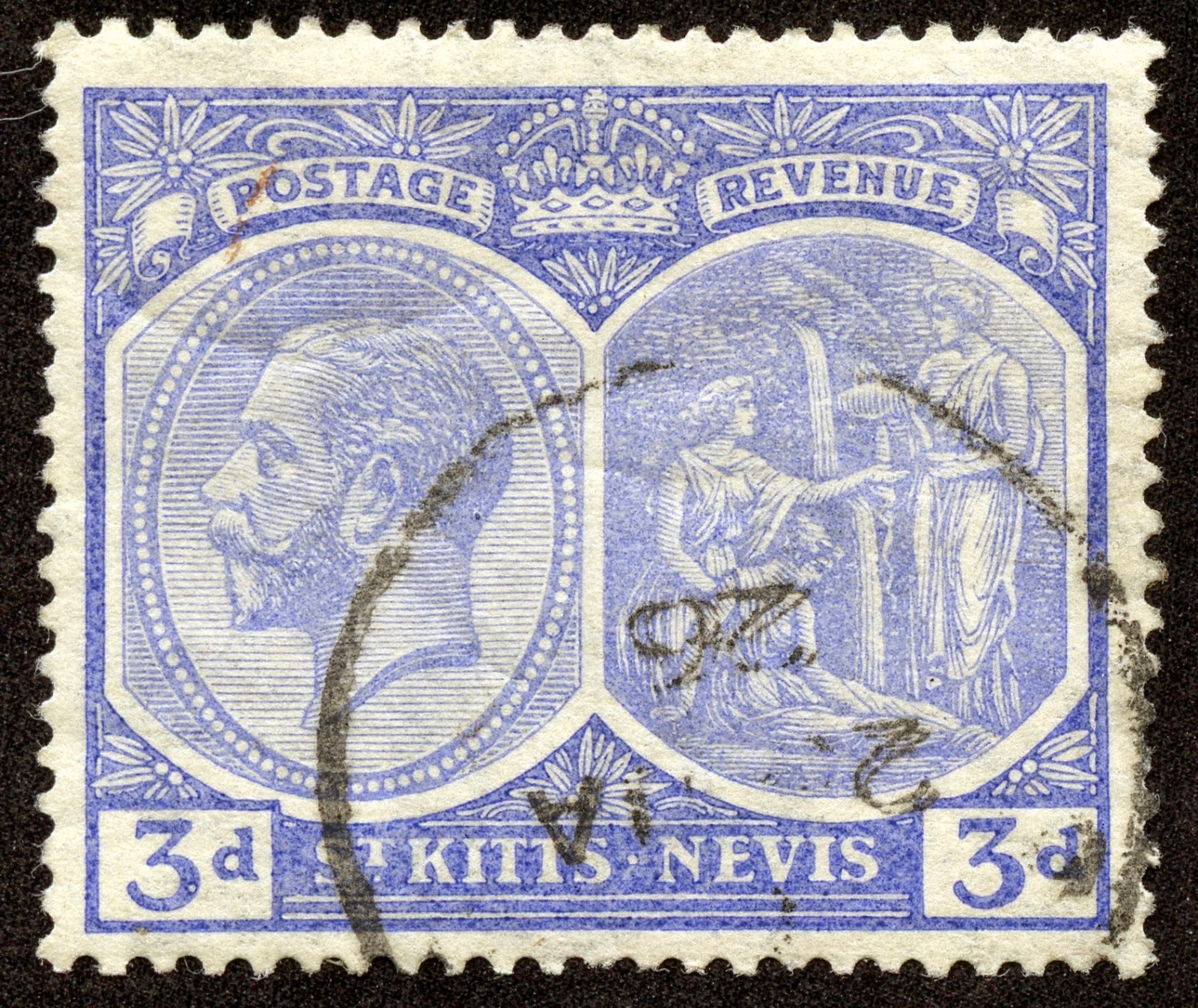 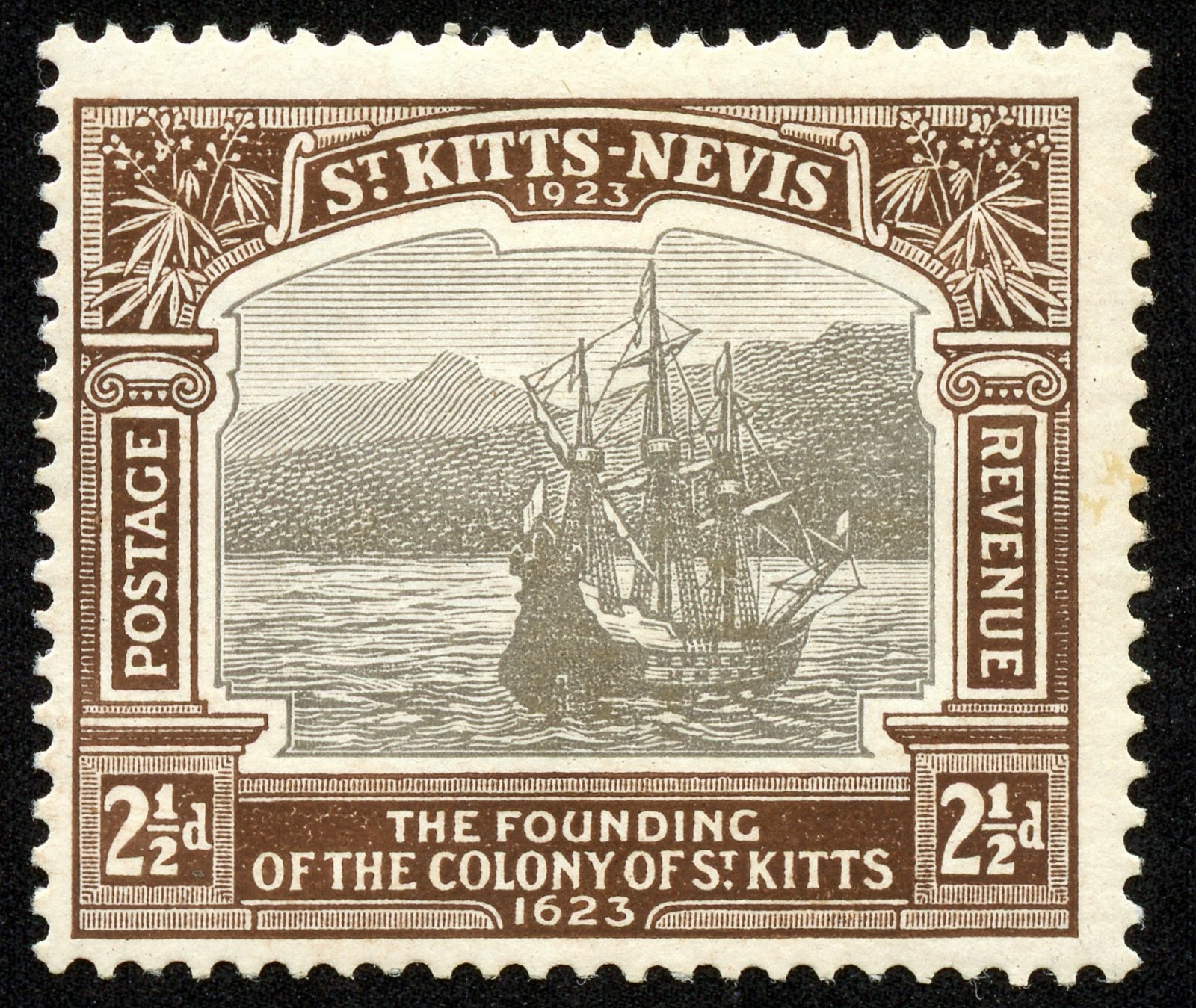 1923 Scott 56 2 1/2p brown & black
"Caravel in Old Road Bay"
St. Kitts (St. Christopher) was settled by the English sea captain, Sir Thomas Warner in 1623 and 1624 ( two voyages), and he established the colony of Saint Christopher with seventeen people. (His initial colony on the Guiana coast was a failure.) The colony established a port settlement ( now called  Old Road Town).

They initially were on good terms with the Carib natives (Kalinago), and developed a tobacco crop.

He permitted French settlers in 1625 to establish their own colony on the island.

Relationships with the Kalinago soured, and 2,000 Kalinago men were massacred at Bloody Point and Stone Fort River or "Bloody River" (so named because of the blood running down the river from the dead bodies) in 1626.

Tobacco was the crop of choice.  But when the colony of Virginia began to dominate tobacco production, sugar cane was planted in 1640. That necessitated importing African slaves for the high labor requirements.

The 1923 thirteen stamp issue celebrated the tercentenary of the founding of St. Kitts. There was one design for the set as shown here. CV ranges from $1+-$6+ for six stamps. 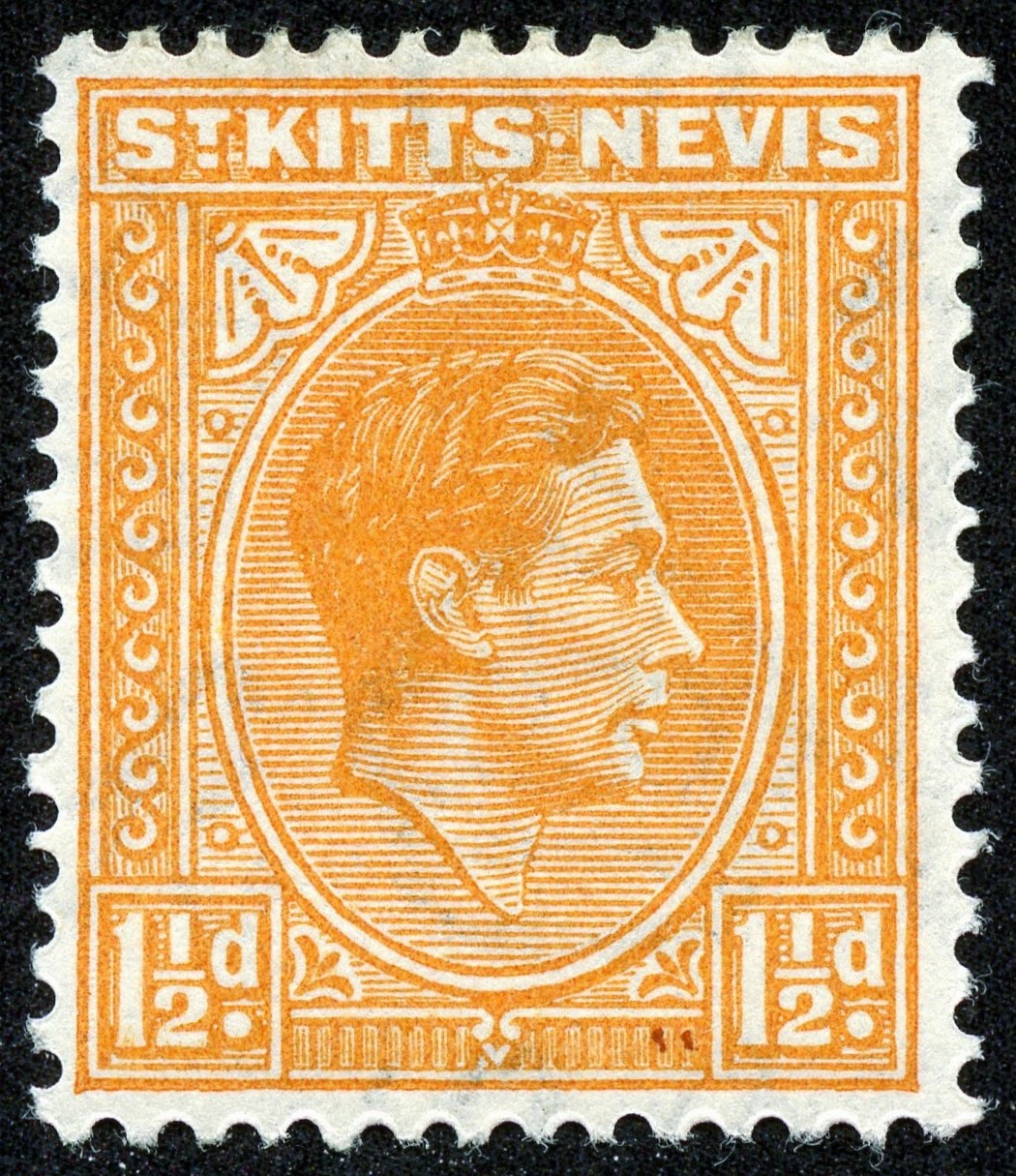 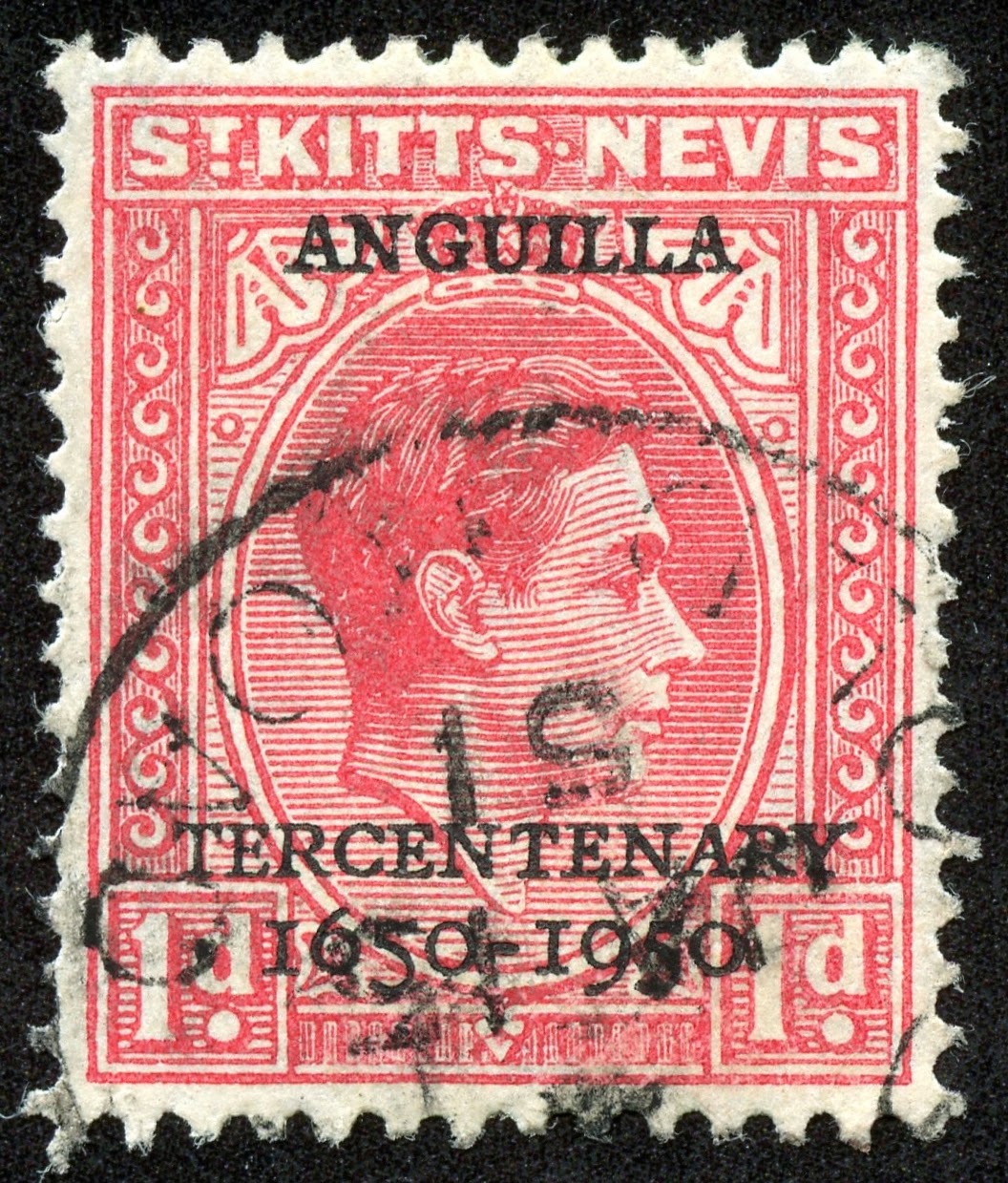 1950 Scott 99 1p carmine
Types of 1938 Overprinted
Anguilla was first colonized by settlers from St. Kitts in 1650. The island is east of Puerto Rico and north of St. Marten. 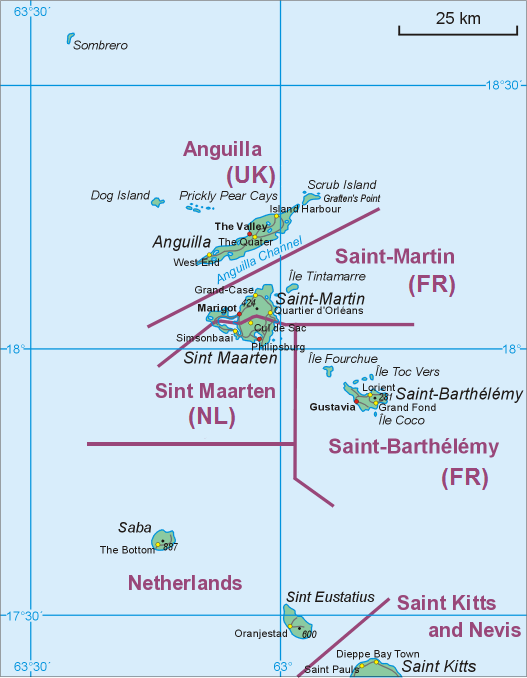 For the 300th anniversary of the settlement of Anguilla, a six stamp issue was released in 1950, using overprinted 1938 St. Kitts-Nevis stamps. CV is <$1.

Desiring to be free of the St. Kitts-Nevis yoke, Anguilla became a separate British Crown colony in 1980 ( Now a British overseas territory). 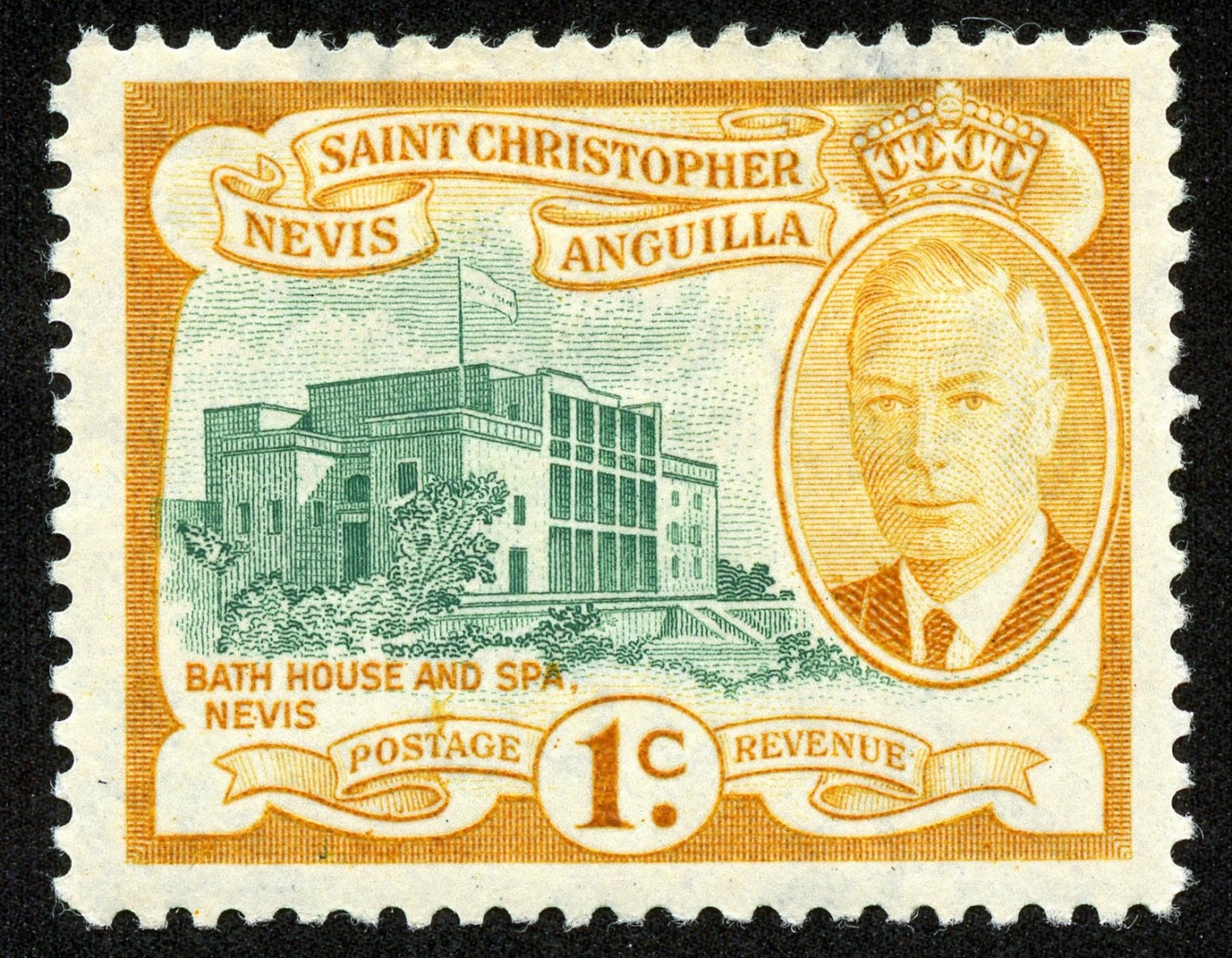 Stamps of the 1952 issue are labeled "Saint Christopher-Nevis-Anguilla". 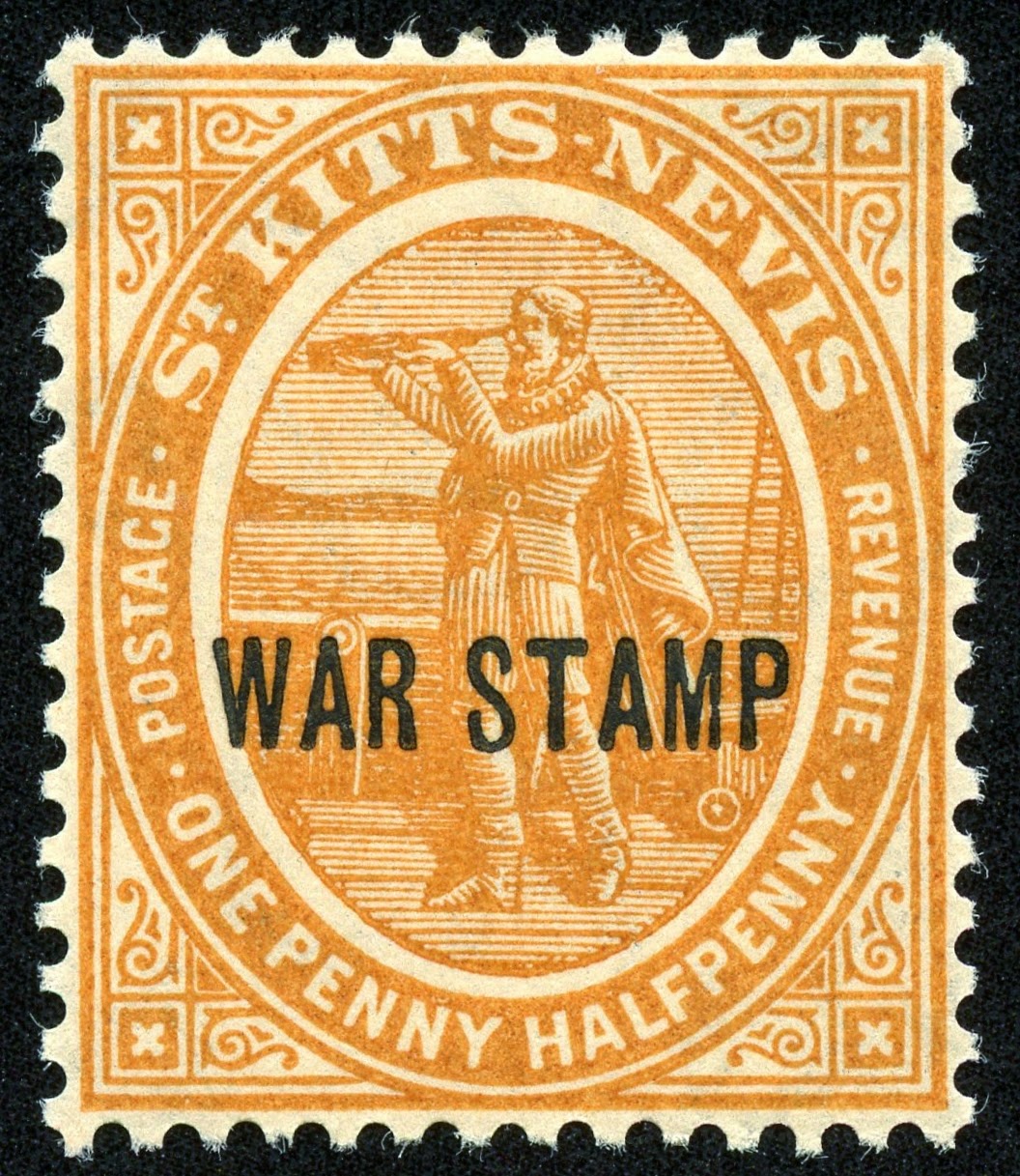 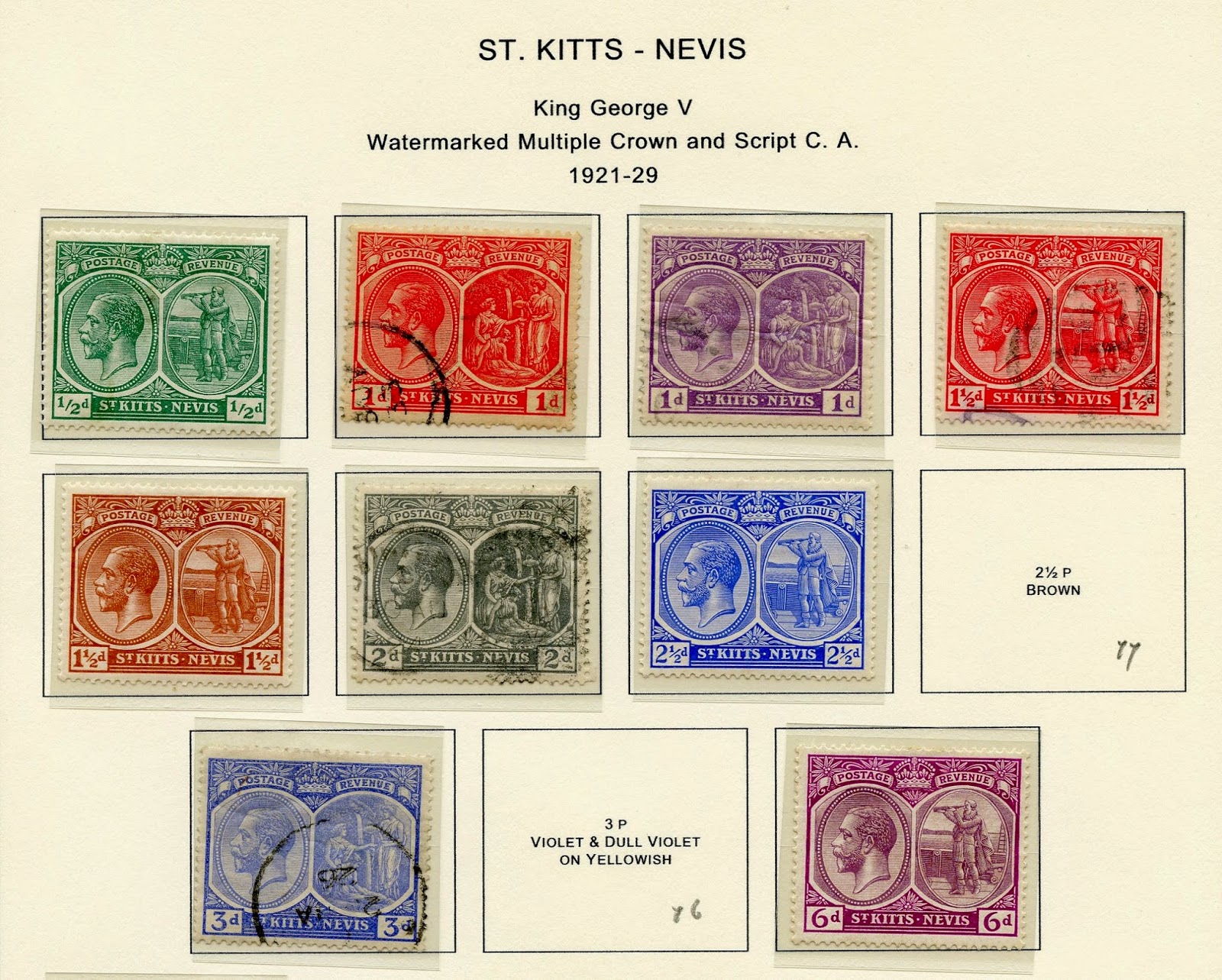 1921-29 Issue in Deep Blue
Deep Blue (Steiner) has eleven pages for 1903-1952 St. Kitts-Nevis. All the major numbers have a space. There are some earlier minor numbers ( I counted nine) in the Scott catalogue that are listed because of a change in color (carmine to scarlet), paper ( chalky or ordinary), or later year of issue. These do not have a space in Steiner. The minor number 1938 issue Perf 13 X 11 1/2 is given spaces, however. 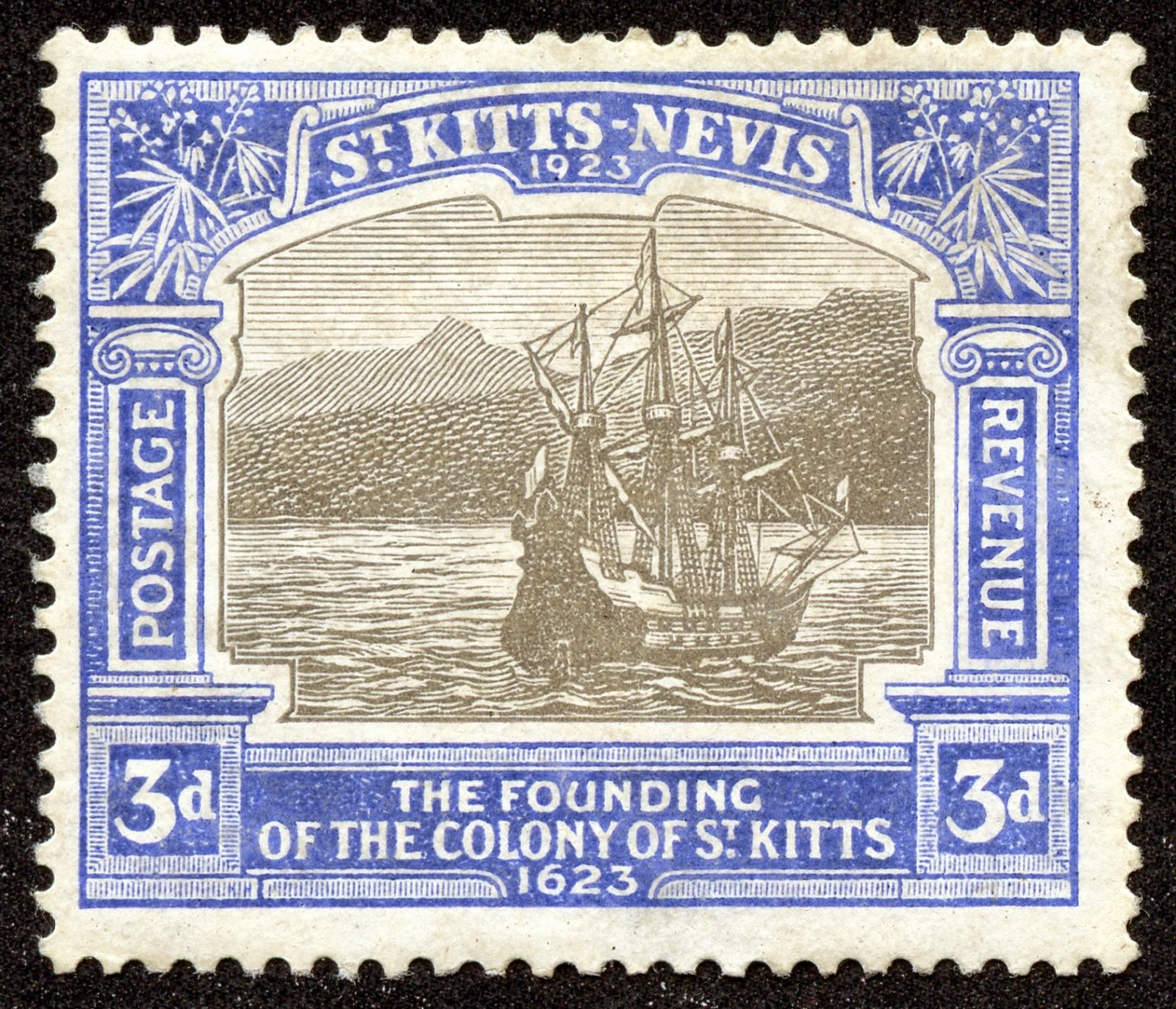 Observations....
* Only one stamp crosses the $10 CV threshold.
* Spaces available in BB are reasonable, with the limitation that stamps with different watermarks, as usual, are only given one space. 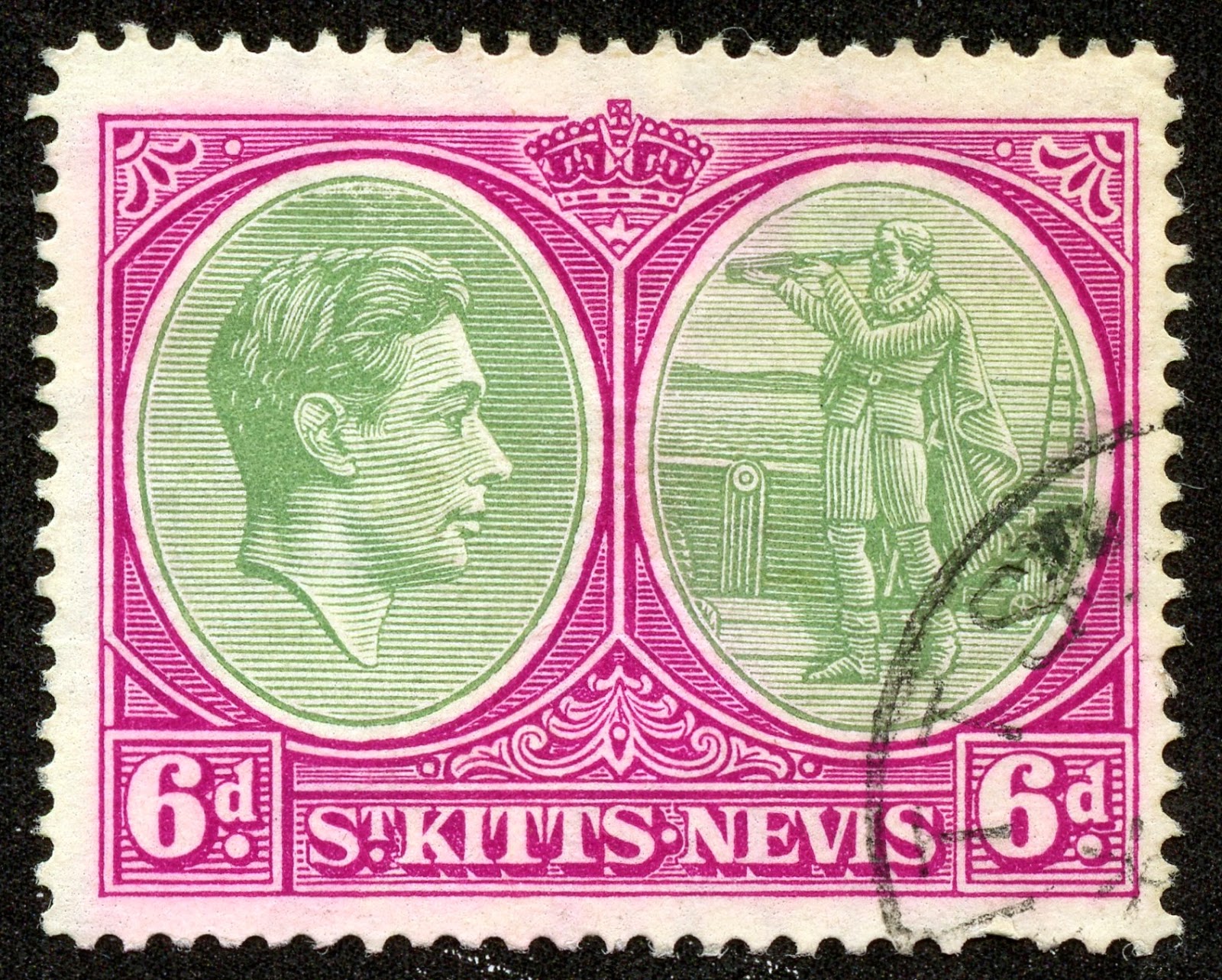 1938-48 Scott 85 6p rose lilac & dull green
"Columbus Looking for Land"
Out of the Blue
The philatelic attractions of the British Leeward Islands colony countries are indisputable.

Note:St. Kitts pic and maps appear to under the public domain. 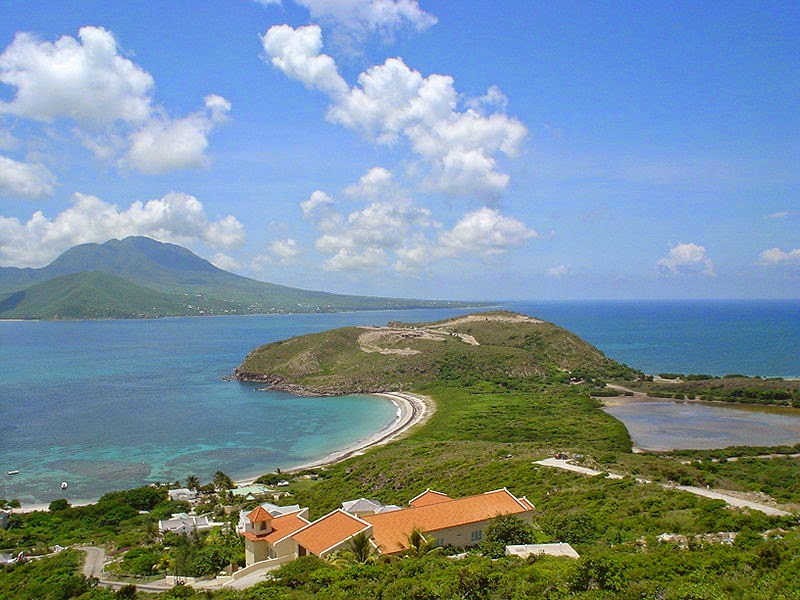