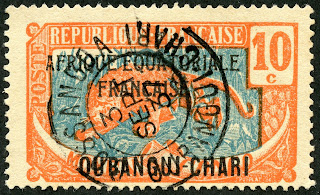 1925 Scott 46 10c red orange & blue "Leopard"
Color Type of Middle Congo of 1907-22, Overprinted in Black
With Additional Overprint in Black
Quick History
Ubangi-Shari (Oubangui-Chari) was a central African French territory and colony from 1903-1958, when it became the Central African Republic. 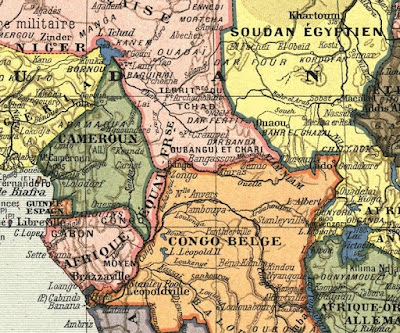 19th Century Map -Pink is French Territory
Note ""Oubangui et Chari" north of "Congo Belge"
The French had established the Bangi (Bangui) outpost along the Ubangi river in 1889, and the territory was named after the rivers Ubangi and Chari.

Administratively, the territory was attached and detached to other French entities during it's existence. It's all rather convoluted, but Stamp World History has an excellent map and information if one wishes to study this more in depth. Thanks Gerben!

Ubangi-Shari was established on December 29, 1903 from the heretofore named French Congo (Gabon-Congo) territory, after the French victory over the Egyptian Abbas II. The French Congo was renamed the Middle Congo (Moyen Congo), also in 1903.

(Between 1904-1910, the French territories in the area were grouped and known as the "French Congo" Federation, according to Stamp World History. In 1906, Gabon and Middle Congo were separated. The name "French Congo" is often found on maps, rather than "Moyen Congo".) 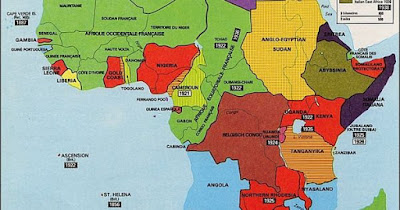 French Territories (green)
On January 15, 1910, the territories of Ubangi-Shari, Middle Congo, and Gabon were administratively merged as the French Equatorial Africa Federation. This was a federation that existed from 1910-1934, similar to the French West Africa colonies federation.

The first issue for Ubangi-Shari proper was released in 1915, and consisted of Middle Congo stamps that were overprinted "Oubangui-Chari-Chad".

The Lake Chad portion of the territory was removed from Ubangi-Shari in 1920, and the stamps, beginning in 1922, now were overprinted "Oubangui-Chari".

But, portending things to come, the stamp issues were additionally overprinted "Afrique Equatoriale Francaise", beginning in 1924.

Stamp production for Ubangi-Shari continued through 1933.

Ubangi-Shari stamps were replaced by those of French Equatorial Africa in 1936.

During WW II, Vichy France controlled the territory from June-August, 1940, when it was captured by the Free French Forces.

In 1946, Ubangi-Shari becomes an overseas territory. 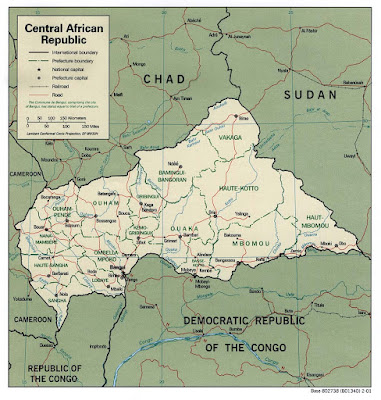 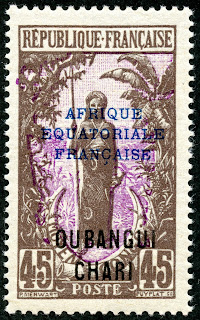 1924 Scott 56 45c chocolate & violet "Bakalois Woman"
Color Type of Middle Congo 1907-22, Overprinted in Black
With Additional Overprint in Blue
Into the Deep Blue
The 2014 Scott Classic Specialized 1840-1940 catalogue has, for Ubangi-Shari 1915-1931, 109 major stamp descriptions. Of those, 43 are CV <$1-$1+, or 39%. Many of the rest of the stamps are CV only a few dollars more. Clearly, Ubangi-Chari, ( And the classical French colonial stamps in general) are reasonably affordable for the WW collector. (British colonial stamps, while a % are affordable, tend to be more expensive.) 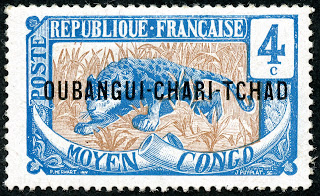 1915 Scott 3 4c blue & brown "Leopard"
Stamps of Middle Congo Overprinted in Black
Between 1915-22, a twenty-two stamp issue proper for Ubangi-Shari-Chad was released, by overprinting in black, stamps of the Middle Congo. CV for the issue ranges <$1-$2 for thirteen stamps.

What a fine looking stamp! 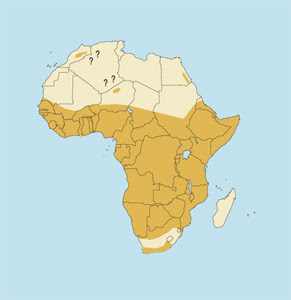 Leopard Distribution in Africa
And it certainly appears that the leopard can be found in the territory, as well as throughout much of sub- Saharan Africa. But the leopard is listed as vulnerable on the IUCN Red List, as leopard populations are declining because of habitat loss. 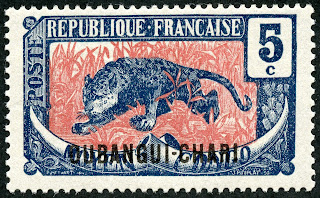 1922 Scott 26 5c indigo & rose "Leopard"
Color Type of Middle Congo of 1907-22, Overprinted in Black
Chad was removed as part of the territory in 1920. Consequently, the 1922 eighteen stamp issue has the overprint ""oubangi-chari" in either black or red.

Note this issue is a  "color type" of the 1907-22 Middle Congo stamps. For comparison, the Middle Congo 5c "Leopard" is dark green & blue. 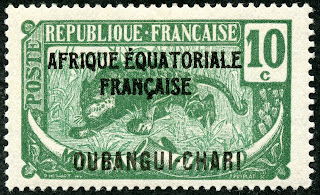 Between 1910-1934, Ubangi-Chari was in the French Equatorial Africa Federation with the other French territories/colonies in the area. Hence, the 1924-33 issue of thirty-three stamps added an "Afrique Equatoriale Francaise" overprint in black, blue, or red.

Many of the 1924-33 stamps applied the additional overprint on the 1922 issue. But others were new color or denomination types. 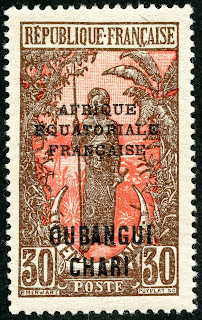 The middle denominations had a "Bakalois Woman" pictorial.

The pictorial image originally was part of the 1990-04 French Congo issue. I couldn't find much on "Bakalois", but they were probably members of the Bantu-Kongo tribal group. 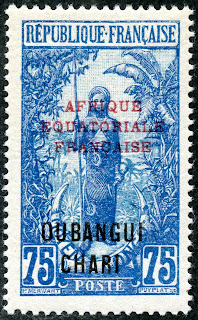 Color Type of Middle Congo 1907-22, Overprinted in Black
With Additional Overprint in Red

Note here the additional overprint is in red. 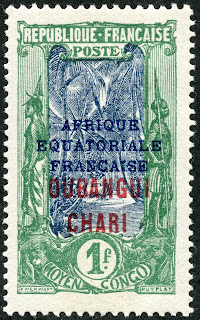 The highest denominations (nine stamps) show a "Coconut Grove". Actually, the only country in Africa today in the top ten list of coconut producing countries is Tanzania- at tenth. 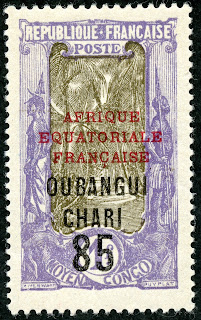 1925 Scott 75 85c on 1fr violet & olive "Coconut Grove"
Types of 1924 Issue Surcharged with New Value in Black
Overprinted in Black, with Additional Overprint in Red
Between 1925-26, three stamp "color types" of the 1924 issue were surcharged with new values in black or red. 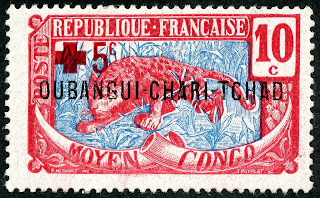 For French colonies, many of them produced a few semi-postals during this time period, apparently for the Red Cross. 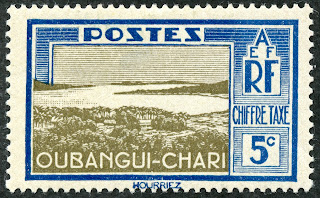 1930 Scott J12 5c deep blue & olive "Landscape"
Postage Due Issue of 1930
Of interest, the only stamps for Ubangi-Chari that were not overprinted from another country's stamps (Middle Congo) were the 1931 Colonial Exposition Issue (common design type), and an eleven stamp postage due issue of 1930!

I am a bit bemused that the French couldn't/didn't produce regular issue stamps for Ubangi-Chari (except overprinted ones), but managed for the postage dues!  ;-)

For most countries in the classical era, postage due stamps and their designs were an afterthought at best, but not for the French! 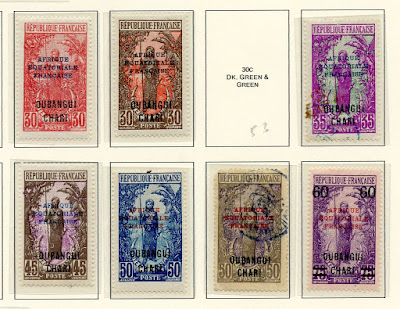 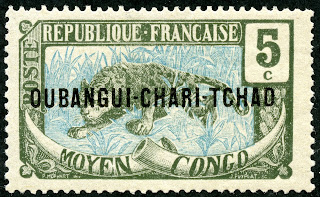 1915 Scott 4 5c dark green & blue "Leopard"
Stamps of Middle Congo Overprinted in Black
Big Blue
Big Blue '69 has three pages and 79 spaces for the stamps of "Ubangi". The coverage is located between "Turkey in Asia" and Ukrainia. Coverage is a robust 72%.

The 40s editions have the spaces arranged differently, and there are 77 spaces total.

There is only one "expensive" (CV $10+) stamp required for the spaces. 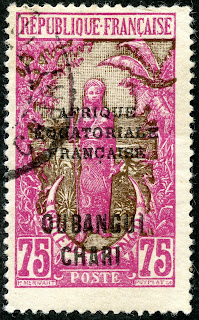 1928 Scott 63 75c rose & dark brown "Bakalois Woman"
Color Type of Middle Congo 1907-22 Overprinted in Black
With Additional Overprint in Black
Out of the Blue
Every time I review a French colonial country, I am struck by the beauty of their stamps, and their affordability.

If the WW collector wished to collect "in sections", gathering and collecting the French sphere stamps as a priority wouldn't be a bad strategy.

Note: Maps and leopard distribution map all appear to be in the public domain.