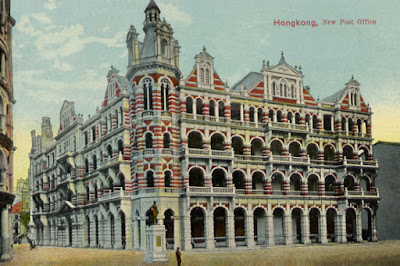 From the outset she seemed out of place, like a debutant arriving at an Edwardian ball in her grandma’s Victorian party dress -- with too much ruffle on her bustle. As she aged, “The Old Lady of Pedder Street”, as Hong Kong’s General Post Office came to be known, estrangement increased. The modernist office blocks that sprang up treated her unkindly, shading her red brick and granite façades from favorable light.  New mail-handling technologies fit uncomfortably. Her distance vision faded as landfills reclaimed more and more of her harbor view. Her furbelows frayed. Finally, in 1976 at age 65, she succumbed to a wrecking ball. Her replacement, an ugly but functional International Style concrete block, now faces similar fate.

Nevertheless, the “Old Lady” serve the British well. Four crowned heads, the Hong Kong stamps from Edward VII to Elizabeth II, changed hands across her counters, including most of the stamps scanned below. Curiously, no classical era stamps with local scenes were issued for Hong Kong, as was common for other British colonies. When pictorials finally did arrive in 1941, one might have thought the “Old Lady” would be featured. Alas, she wasn’t. She’s hidden behind the ocean liner in the rose-colored 4 cent harbor view (see supplement). 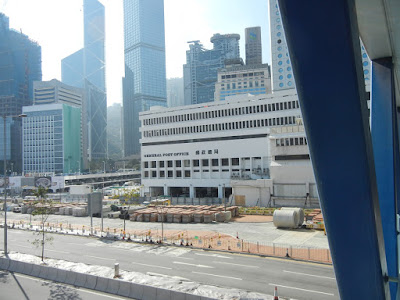 Hong Kong Main Post Office 2012
Picking up on Bud's theme, here is a pic I took of the concrete block "main" post office in Hong Kong. I visited it in 2012, and there is a philatelic section where one can buy stamps and philatelic souvenirs. It did appear a bit forlorn and out of place among the high rises surrounding it.

For a personal view of Hong Kong and the Cantonese speaking part of China (Guangzhou (Canton)), see my Big Blue goes to China and Hong Hong blog post. 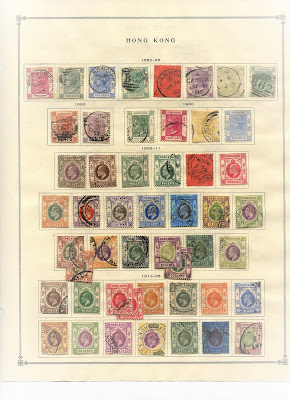 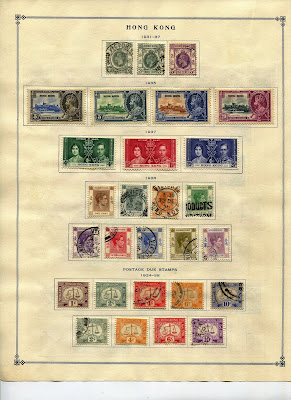 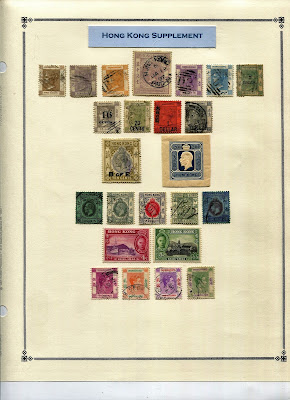