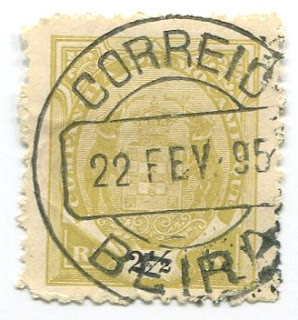 Scott #10
Bud's Big Blue
Bud's Observations
In the late 19th century, Portugal, an empire eager to extract wealth from its colonies, admitted that it had no way to exploit all of Mozambique. So, it ceded large swaths of the colony to privately financed companies -- a common colonial strategy under such circumstances. Mozambique Company, one such administrative arrangement, was established in 1891 and financed by British, German, French and South African investors. In exchange for agreeing to develop agriculture, metal and mineral excavation, railways, port facilities, and government services (plus a small percentage of the profits), the Company had complete rights to exploit the lands and people in 51,881 square miles of territory.

As it turned out, Mozambique Company met few of its obligations but it did conscript labor and raise taxes -- main sources of corporate income. It rapidly became a forced labor regime aimed at plundering the region. Although the slave trade had been formally abolished, the Company transformed its prerogatives to corporate form of slavery, violently when it deemed necessary.(1) It even sent conscripts to work in South African mines. “To minimize expenses the directorship kept salaries of local European employees low, expecting them to supplement their wages by pillaging the local population.”(2)

Many outraged Africans fled the areas under Company control or, not surprisingly, rebelled against this new form of slavery. Portugal twice sent in the military to quieten matters.

The Company’s main center for administrative control was located in the port city of Beira where it established a postal service that issued stamps and a bank that issued currency. 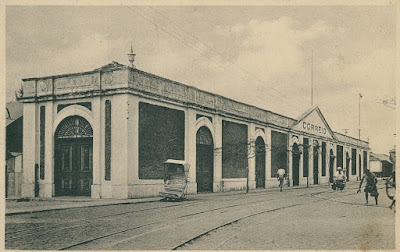 Beira Post Office, about 1920
The Company built an imposing structure for its main post office. Notice the tram carriages passing by it, a conveyance enjoyed by Europeans in many east African cities. Rickshaw-like buggies jostled along on tracks with African natives pushing.

From 1892 until 1918 the Company used standard Portuguese stamps overprinted or inscribed “Companhia de Moçambique.” The earliest of these, if found in feeder albums, are sometimes reprints. Of the seven showing on the supplement pages (below), I believe to top two to be smooth surfaced reprints and the five others to be originals with chalky surfaces. Reprints command higher prices. Beginning in 1918, the Company issued its own stamps that were designed and printed by Waterlow and Sons, Ltd., a British Company. These stamps show happy Africans tending prosperous plantations, modern transport, and thriving wildlife -- images not remotely consistent the realities described above. However, stamp collectors throughout the world enthusiastically filled their album spaces with these attractive stamps, thereby unintentionally providing the Company with a considerable source of income and a public relations triumph. Many of us, my childhood self included, were transfixed by the beauty of these stamps.

Essays for the first Waterlow stamps appear at the end of the supplement pages. They are colored differently from the stamps that were actually issued. They have the “specimen” overprints and the values punched out. 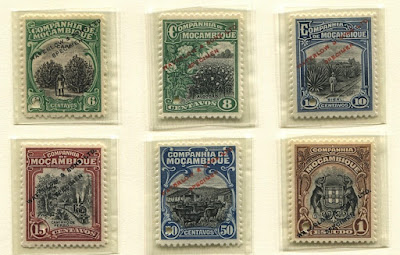 The Company’s philatelic public relations gambits continued. In 1939 seven stamps were overprinted to commemorate a visit from the Portuguese president -- appealing triangles with animals and ships. At the time, the President must have been impressed with what he saw because he awarded the Grand Cross of the Order of the Colonial Empire to the Company.

Scott #s 196-8
The Company’s last philatelic public relations ploy, and coincidentally their last stamps ever, was the set of seven commemorating the double centenary of the Foundation of Portuguese Nationality in 1140 and the Restoration (that is, separation from Spain) in 1640. (Five showing below, the remainder in the page scans). If these were meant to curry favor in Lisbon, they did not do so sufficiently, for the Company lost its concession in 1942. However, despite its bad financial performance and the Portuguese desire to consolidate control of its colonies, the Company was allowed to continue some farming and commercial operations. But no more stamps.

(1) The Mozambique Company’s brutality is detailed in Eric Allina, Slavery by Any Other Name: African Life under Company Rule in Colonial Mozambique (Charlottesville: University of Virginia Press, 2012). His data come from previously unavailable Company records and interviews with survivors.

Mozambique Company charity stamps seem contradictory to my foregoing comments, so I put them at end of this post surrounded in black. 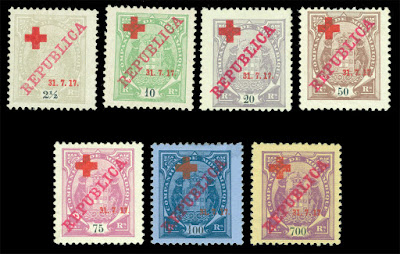 Scott #s B1-7
Jim's Observations
The Mozambique Company had the concession from Portuguese government to administer (and extract wealth) from the central portion of Portuguese East Africa (Mozambique). The exclusive concession began in 1891, and lasted 50 years until 1941, when it was not renewed.
Among the rights of Mozambique Company, financed largely with British capital, was the ability to collect taxes, and use forced labor on its plantations. These two prerogatives, were, in fact, how the Company made its money. It did little to develop the lands, except for the Beira- Salisbury (now Harare) railway in 1899, and a Nyasaland line in 1922.
One of the other rights? The production of stamps. And produce they did, with some 275 stamps issued between 1892-1941. But not just any stamps- you know, the usual uninspired Portuguese colony fare- but bi-colored pictorials engraved in London beginning with the 1918 issue forward.Wow!...as poor as their administration of the colony was, their stamps are magnificent- and cheap for WW classical collectors to own.
But truth be told, Bud's essay (above) does put a pall on these stamps.
Mozambique Company Blog Post & BB Checklist
Mozambique Pictorials
Page 1 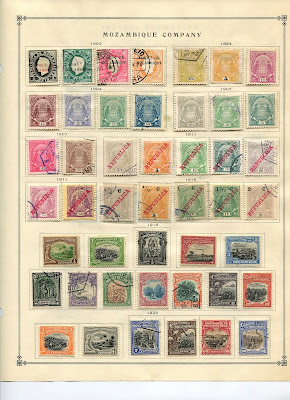 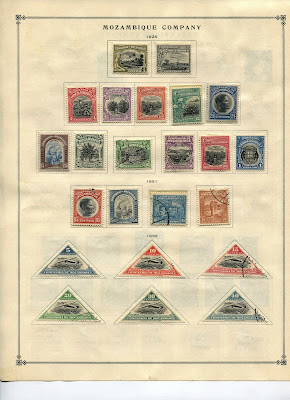 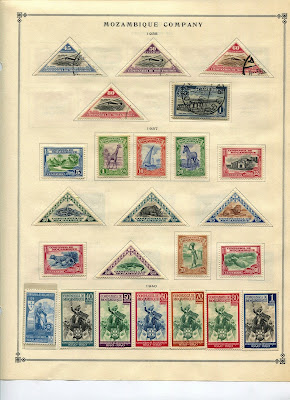 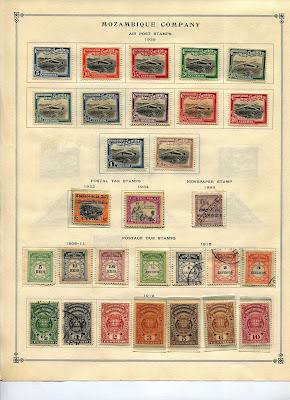 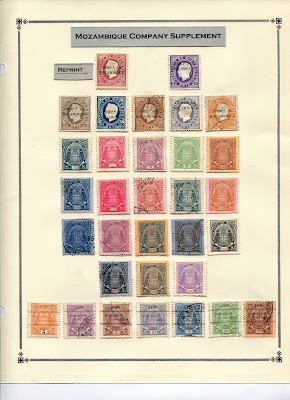 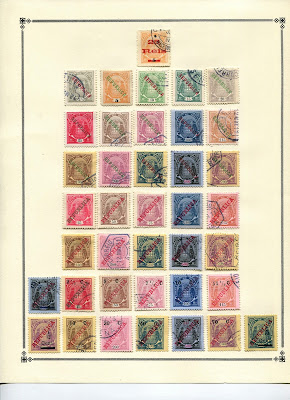 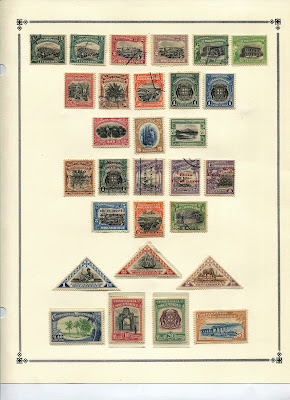 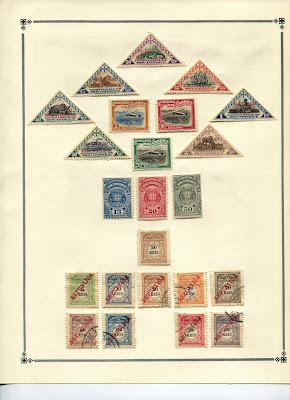 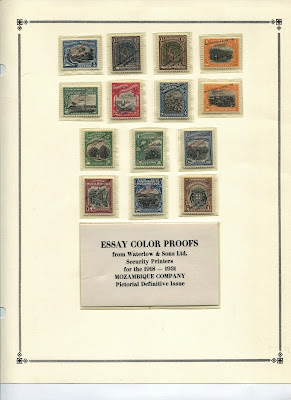 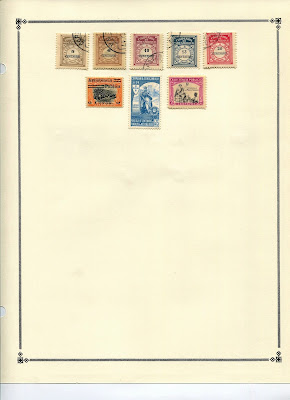