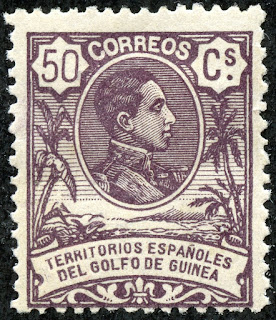 1909 Scott 94 50c dark violet "Alfonso XIII"
Quick History
Spanish Guinea, located in western Africa originally between the French Congo (then Gabon , also French Equatorial Africa) and Cameroon on the Gulf of Guinea, was a Spanish protectorate (1885), and then a Spanish colony, beginning in 1900. 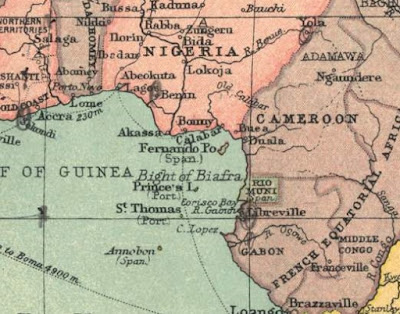 Rio Muni (Spanish Guinea)
Until 1909, Spanish Guinea actually only consisted of the continental territory known as Rio Muni, after a river flowing through the region. Bata, a military post on the coast, was the capital. (Bata is still the largest city on the mainland.) 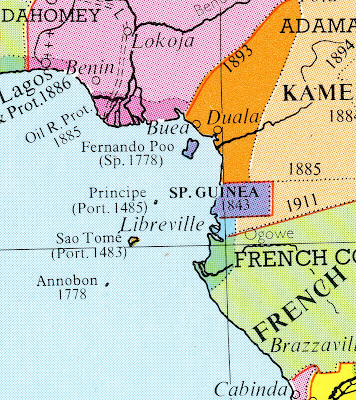 Spanish Guinea (Rio Muni)
(Year labeling on the map is initial influence of the European Power)
Stamps issued for the Rio Muni territory from 1902-1909 were labeled "Guinea Espanola" and "Guinea (Continental) Espanola".

But there were other Spanish  colonies on islands in the Gulf of Guinea: namely Fernando Po with the important settlement Santa Isabel and administrative capital (Stamp production 1868-1908, 1929), and Elobey, Annobon & Corisco (Stamp production 1903-1910).

(For more background on the history and stamps, see the Fernando Po and Elobey (Grand and Chico), Annobon & Corisco blog post links above. Also, for much more history, as well as a great synthesis map, check out Gerben's wonderful Stamp World History website here and here. ) 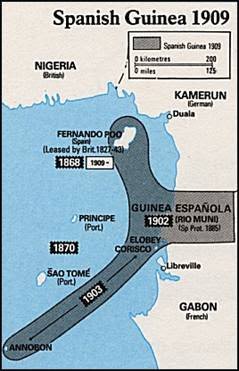 In 1909, "Spanish Guinea (Rio Muni)" is expanded administratively to include:
Fernando Po, and  Elobey, Annobon & Corisco"
Then, in 1909, the administration- for all intents and purposes- of all the Spanish colonies in the area was subsumed under "Spanish Guinea", with Santa Isabel on Fernando Po island the most important settlement. (The formal legal changes were not made, though, until 1926.)

Cacao, coffee, and logging were the main economic activities.

Stamps from 1909 for the territories was issued under "Spanish Territories of the Gulf of Guinea", and Fernando Po and Elobey, Annobon & Corisco stamp production ceased (except for a 1929 production from Fernando Po). Spanish Guinea, under this new amalgamation, lasted until 1960.

Spain tried to keep the territory by making it "provincial"  from 1960-68, but that didn't work.

Full independence was achieved in 1968, and Equatorial Guinea was born.

Of interest, the Michel catalogue keeps the 1909-1959 issues separate as the Spanish Territories in the Gulf of Guinea, while the other major catalogues lumps all these issues under Spanish Guinea. 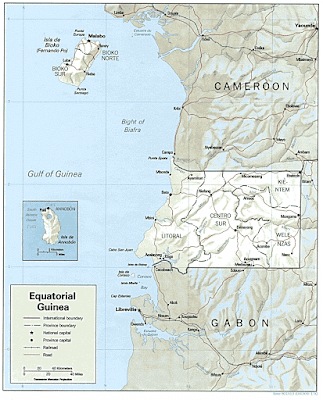 Equatorial Guinea
As a legacy, Equatorial Guinea is the only independent African nation in which Spanish is the official language. The population in 2012 is a small 1.6 million. Malabo (the former Santa Isabel) on Bioko island (Fernando Po) is the capital. Of interest, Equatorial Guinea is now a large oil producer, and is the richest country per capita in Africa, although the wealth is distributed very unevenly. 20% of children die before age 5, and 50% do not have access to clean drinking water. Human trafficking is a major problem, and the current authoritarian regime in power has one of the worst human rights records on the entire planet. 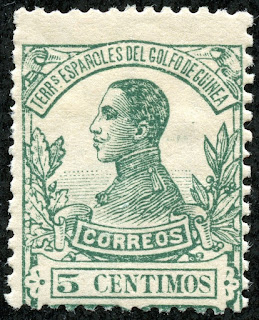 Now one just needs to find them. ;-)  As a general rule in my experience, Spanish colony stamps are underrepresented in feeder albums and collections in the United States. So, although inexpensive, also not common.

Recall that Spanish Guinea only included the Rio Muni area beginning in 1902, and stamps of Spanish Guinea were issued and used only for Rio Mundi. Fernando Po, and Elobey, Annobon and Corisco had their own stamp issues.

Beginning in 1909, all of these territories came under the administration of Spanish Guinea, and Spanish Guinea stamps were used. 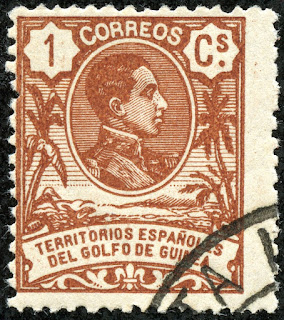 1909 Scott 85 1c orange brown
"King Alfonso XIII"
The "Rio Muni" era (1902-09) consists of seven issues with 90 stamps. Most issues reflect the "Alfonso XIII" key type issued as well for other Spanish colonies, but there was also a surcharged 1903 and Revenue issue, and an overprinted 1906 issue, using the stamps of Elobey, Annobon, and Corisco.

Long story short- I have none of them at the moment, although 30 are CV <$1-$1+. (Didn't I mention that Spanish colony stamps are not that common in U.S. based WW collections? ;-)

Consequently, the coverage review begins with the 1909 "Spanish Territories of the Gulf of Guinea" era, when Spanish Guinea consisted of all the Spanish colonies around the Gulf of Guinea: Rio Muni, Fernando Po, and Elobey, Annobon, and Corisco.

Blue Control Numbers on Back
As is typical for many Spanish issues, there is a control number on the back of the stamp. 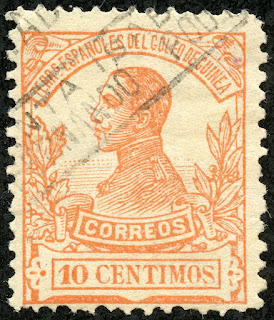 The 13 stamp 1912 issue has another portrait of Alfonso XIII. Most of the issues for Spanish Guinea are printed by typography, as is this one. Note the "Santa Isabel/ Fernando Po" cancellation? 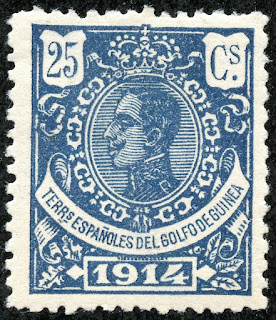 Alphonse Leon Ferdinand Mary James Isidore Pascal Anthony of Bourbon and Habsburg-Lorraine was King of Spain from 1886 to 1931. He was a monarch from birth, although his mother (Maria Christina of Austria) served as his regent until his 16th birthday. Because he had family ties to both sides of the conflict, he kept Spain neutral during WW I. 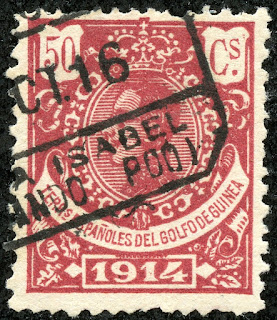 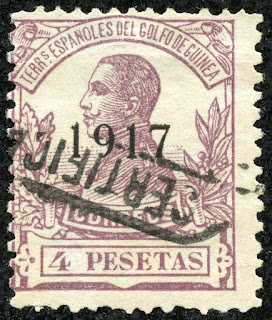 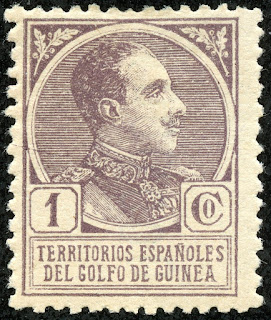 1919 Scott 158 1c lilac "Alfonso XIII"
The 1919 issue has thirteen stamps, and the CV for 10 stamps is <$1. I note that Scott lists a 165a 25c blue (error in color) as CV $60+, as the normal color is green. By presumption, the blue color for the 20c must have been used by mistake for the 25c. I assume this is documented as the cause of the error. But, in general, if one finds a blue stamp that should be green, that is usually a chemical changeling in my experience.

I should mention that the blue control number on the back of this 1c stamp is A000,000. ! ? I'm not sure why, could this have been a "specimen" stamp? 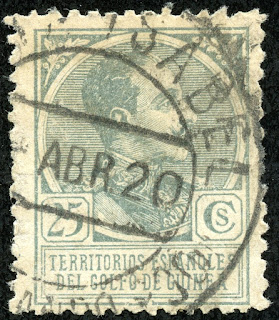 1919 Scott 164 25c green
Here is another stamp from the 1919 issue. I believe all my cancelled examples are from Santa Isabel. 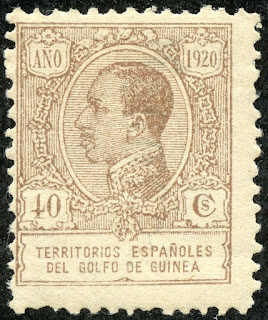 1920 Scott 179 40c light brown "Alfonso XIII"
The 1920 issue has thirteen stamps. Many of the stamp issues for Spanish Guinea are rather poorly centered, and the typographic print is nothing to write home about, either. ;-) 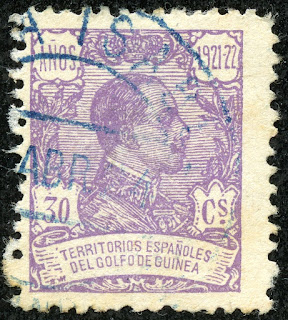 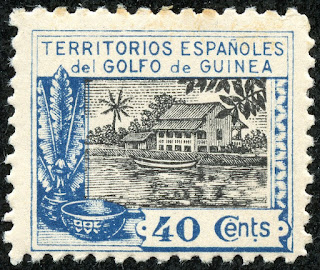 The "Nipa House" was apparently the residence of the governor.  "Nipa" refers to, I believe, a stilt design. 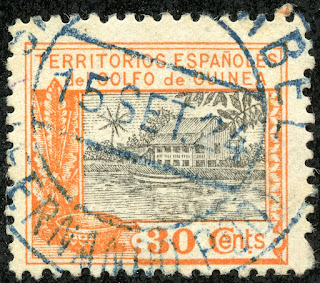 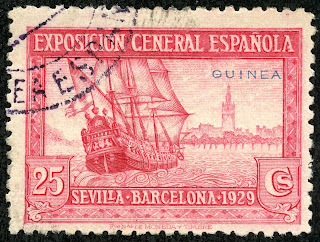 1929 Scott 213 25c bright rose
"Santa Maria  and View of Seville"
Seville-Barcelona Issue of  Spain, Overprinted in Red or Blue
For the international exhibition in Seville-Barcelona, the 1929 Issue of Spain was overprinted for Spanish Guinea on eleven stamps, as well as for Fernando Po, Spanish Morocco, and Spanish Sahara. 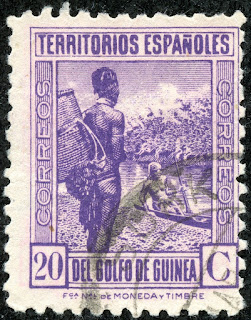 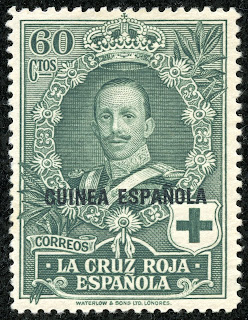 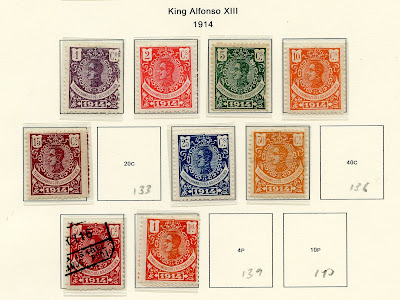 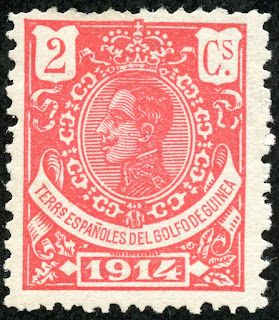 BB could have been more generous, as there are a number of CV <$1 stamps not given a space. And the 1917 overprinted issue (nine stamps CV <$1) is left out. But, considering the lack of availability of Spanish Guinea stamps in most collections, perhaps that is for the better. ;-)

The coverage is located between Spain and Spanish Morocco in the '69. 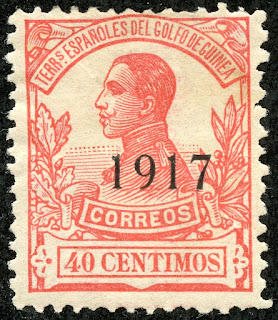 Note: Maps appear to be in the public domain. The Rio Mudi map, which I cropped from the original, is from an upload at Stamp Community Family Forum by Rodney Allen (Rod222) of Perth, Australia fame, who has given me general permission to use his uploads for the blog. Thanks Rod!