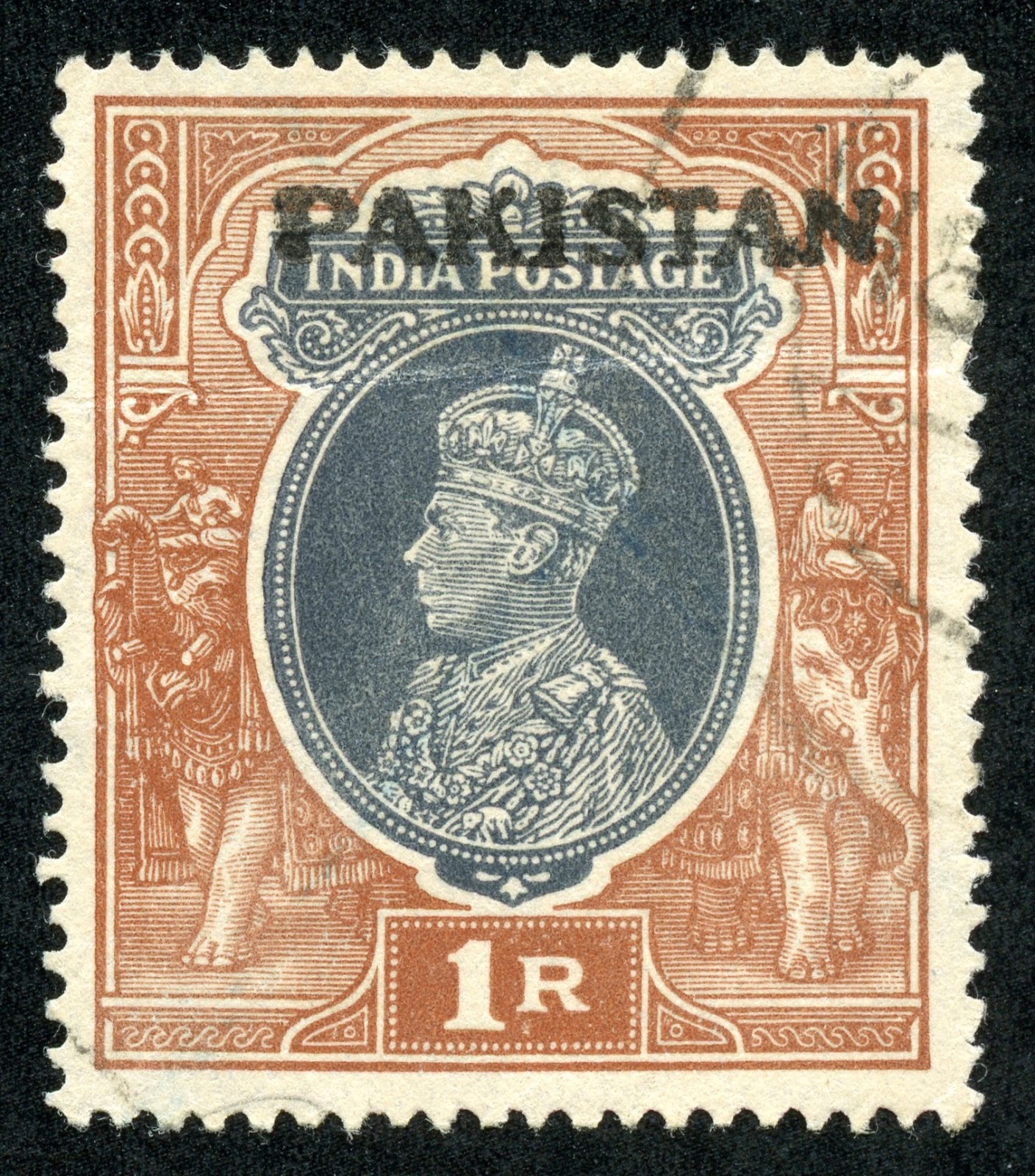 1947 Scott 14 1r brown & slate
Stamps of India 1937-43, Overprinted
Quick History
The Dominion of Pakistan came into existence as a sovereign country on August 15, 1947, when it and the Dominion of  India were partitioned from British India. Both Pakistan and India then joined the British Commonwealth.

The borders of Pakistan separated out the Muslim majority in the northwest and east from Hindu India. 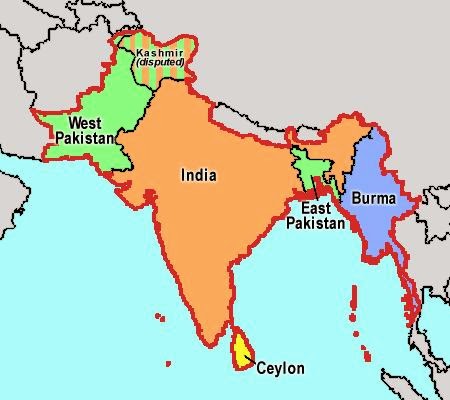 The Dominion of Pakistan 1947-1956
West Pakistan & East Pakistan
In the east, the province of Bengal was divided into East Bengal ( "East Pakistan"), and West Bengal, which remained in India.

In the northwest, the western portion of Punjab became part of Pakistan, while the east part remained with India.

The other provinces that joined as a federation within Pakistan included Balochistan, Sindh, and the North-West Frontier Province. The Native (Princely) States (including stamp issuing Bahawalpur) within the Provinces also joined the federation.

The Capital of the Dominion was Karachi. ( The Capital was moved to the planned city of Islamabad in 1960.)

Pakistan
The Dominion and the monarchy was abolished in 1956, with the development of an Islamic Republic. In 1971, after a bloody civil war,  East Pakistan left the Republic to become the country of Bangladesh.

So ends this rather too quick history. ( A deeper historical review by readers is encouraged.) Pakistan's own stamp designs, which were issued beginning in 1948, are not part of the Scott Classic catalogue. Therefore, I will  not include them here. 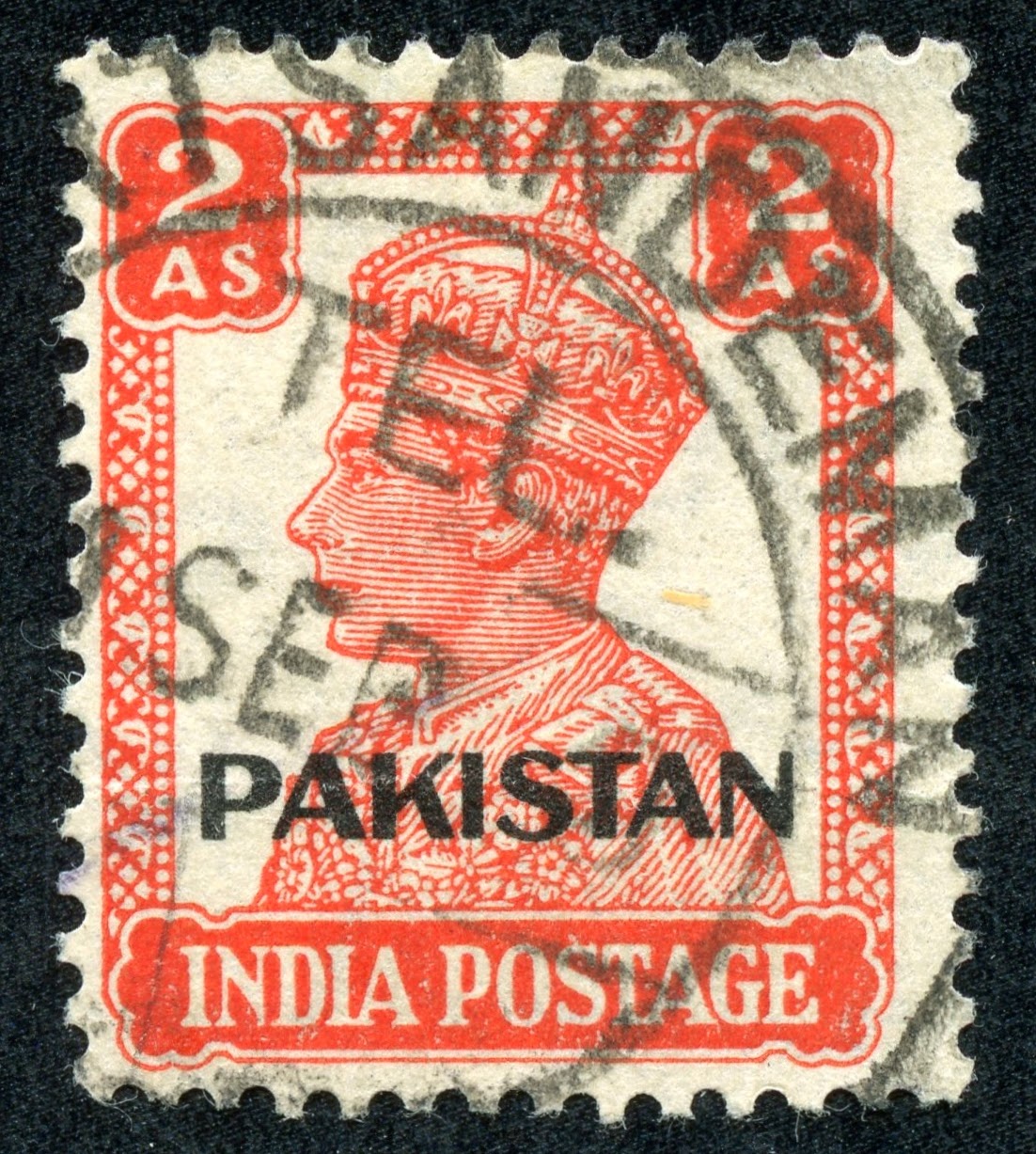 1947 Scott 6 2a scarlet
Stamps of India 1937-43, Overprinted
Beginning October 1, 1947 (Recall Pakistan came into existence August 15, 1947), 19 stamps of India were overprinted as shown for Pakistan. As Pakistan was a Dominion, the image of George VI was appropriate. The truth is, though, this issue ( and the 1947-49 Official issue) were the last to show a monarch, even though the Dominion lasted until 1956. Queen Elizabeth, as "Queen of Pakistan", never appeared on a Pakistan stamp during this era. The times were a changin'. 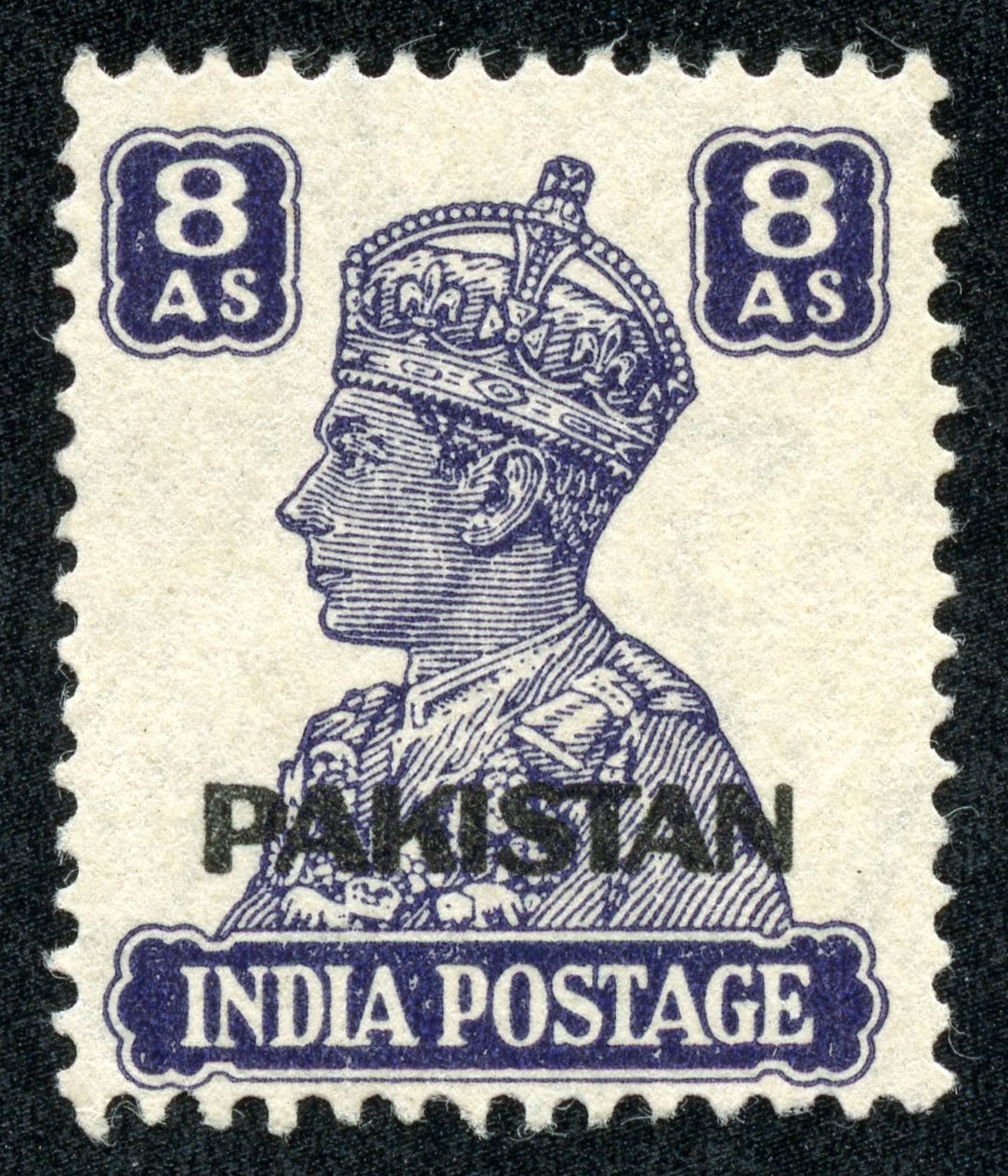 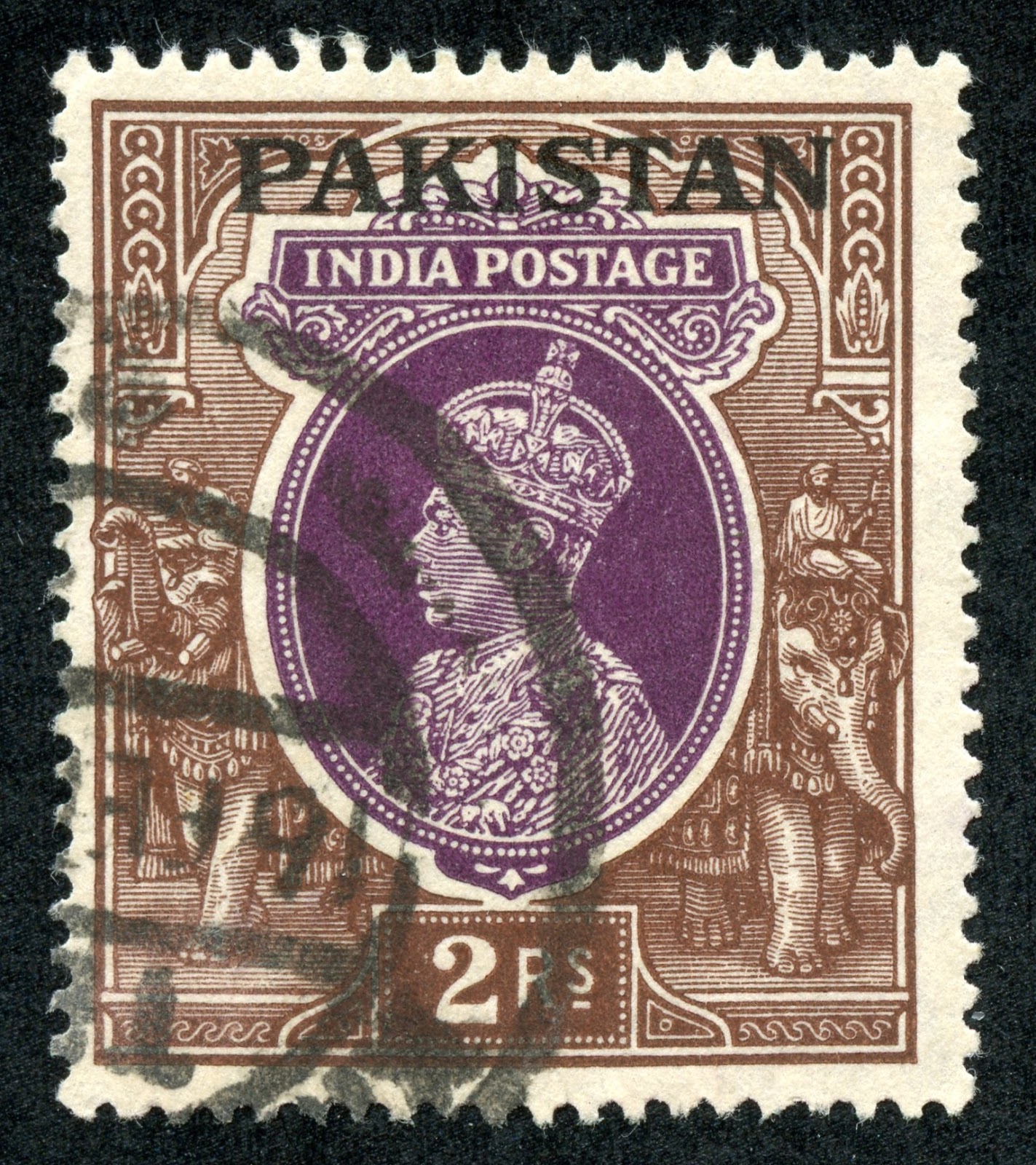 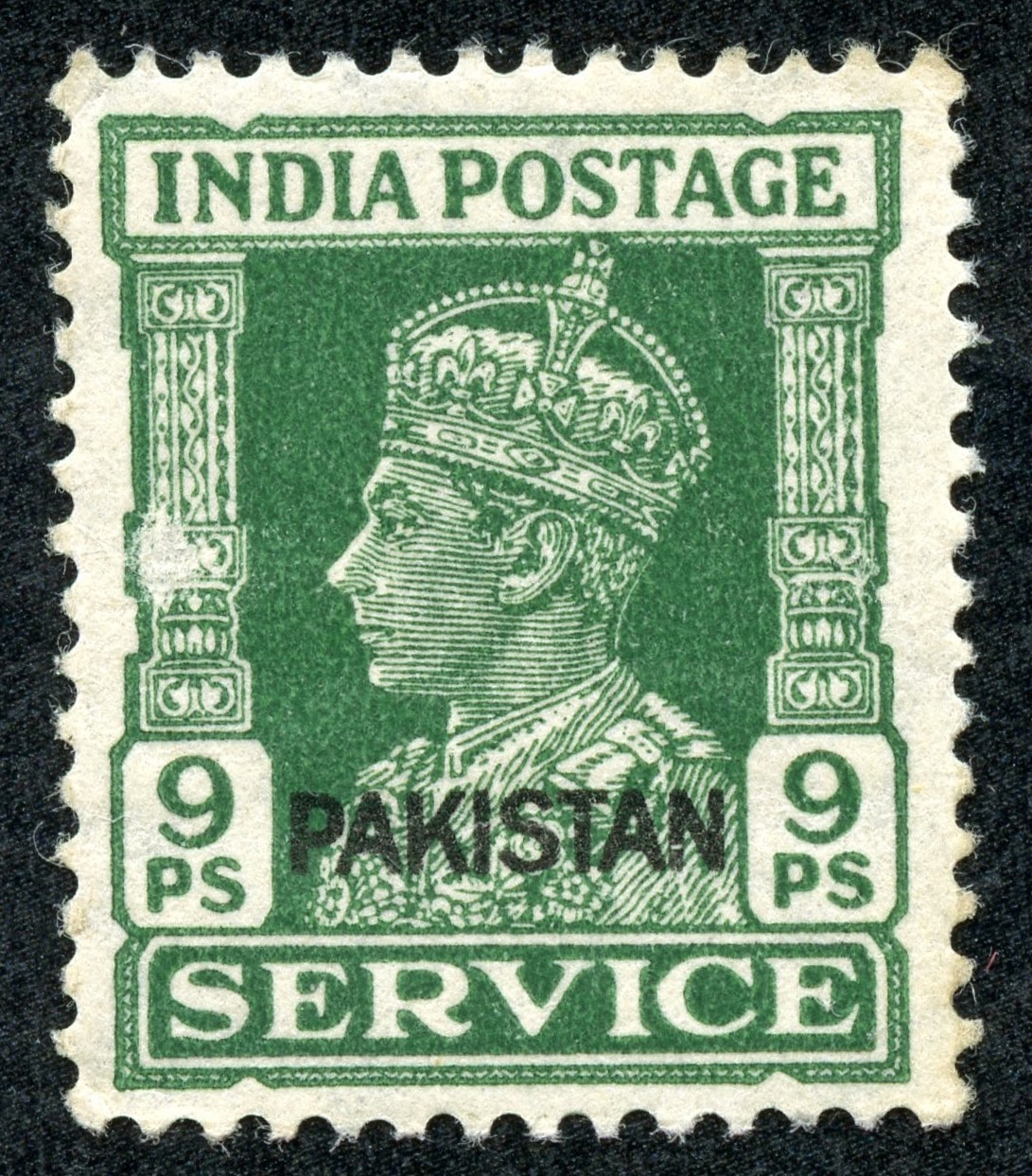 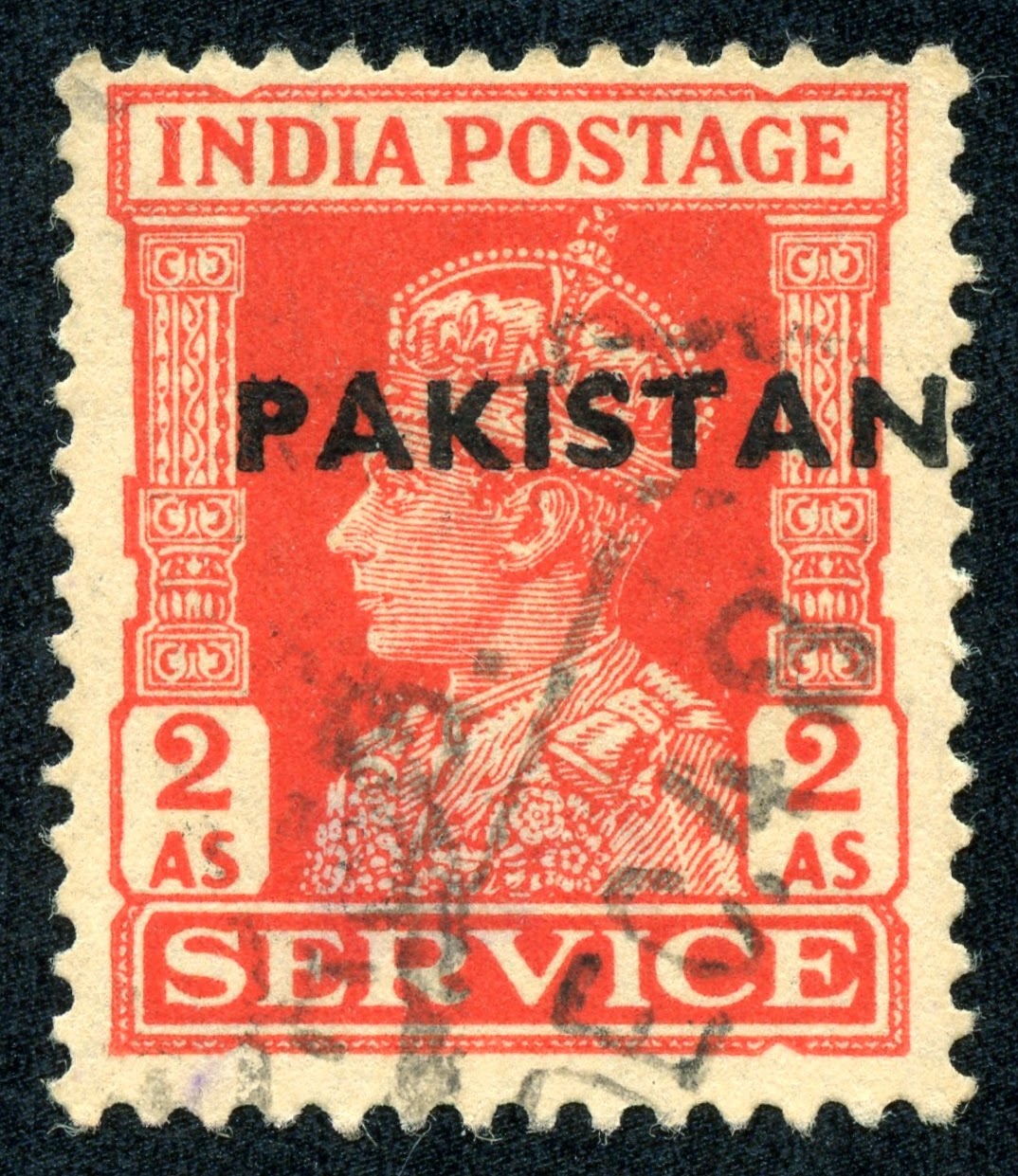 1947 Scott O6 2a scarlet
Note the "Local" overprint
What do you make of this large overprint? The 2012 Stanley Gibbons Commonwealth & British Empire Stamps 1840-1970 catalogue states: " Numerous provisional "Pakistan" overprints, both handstamped and machine-printed, in various sizes and colors, on Postage and Official stamps, also exist". 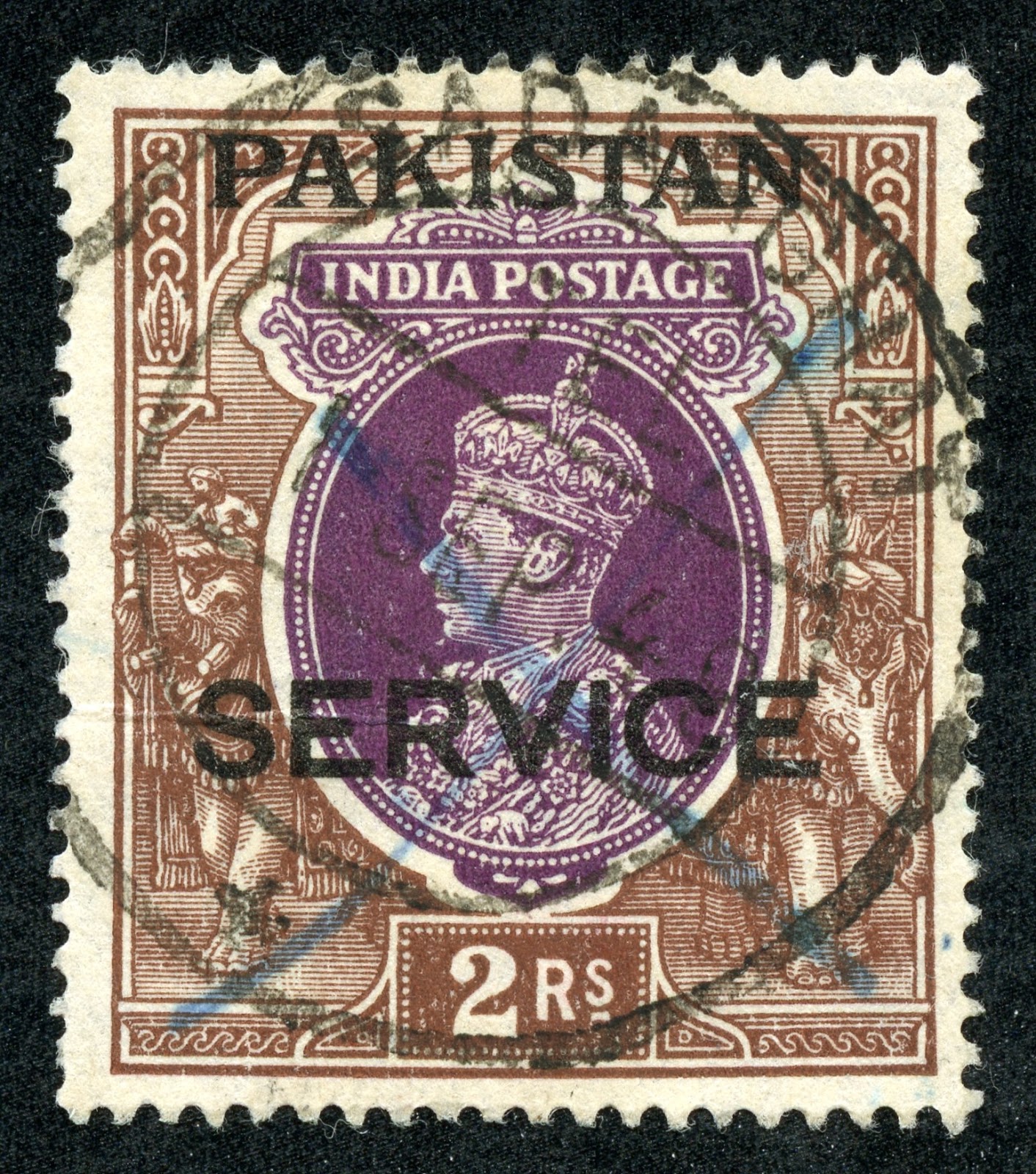 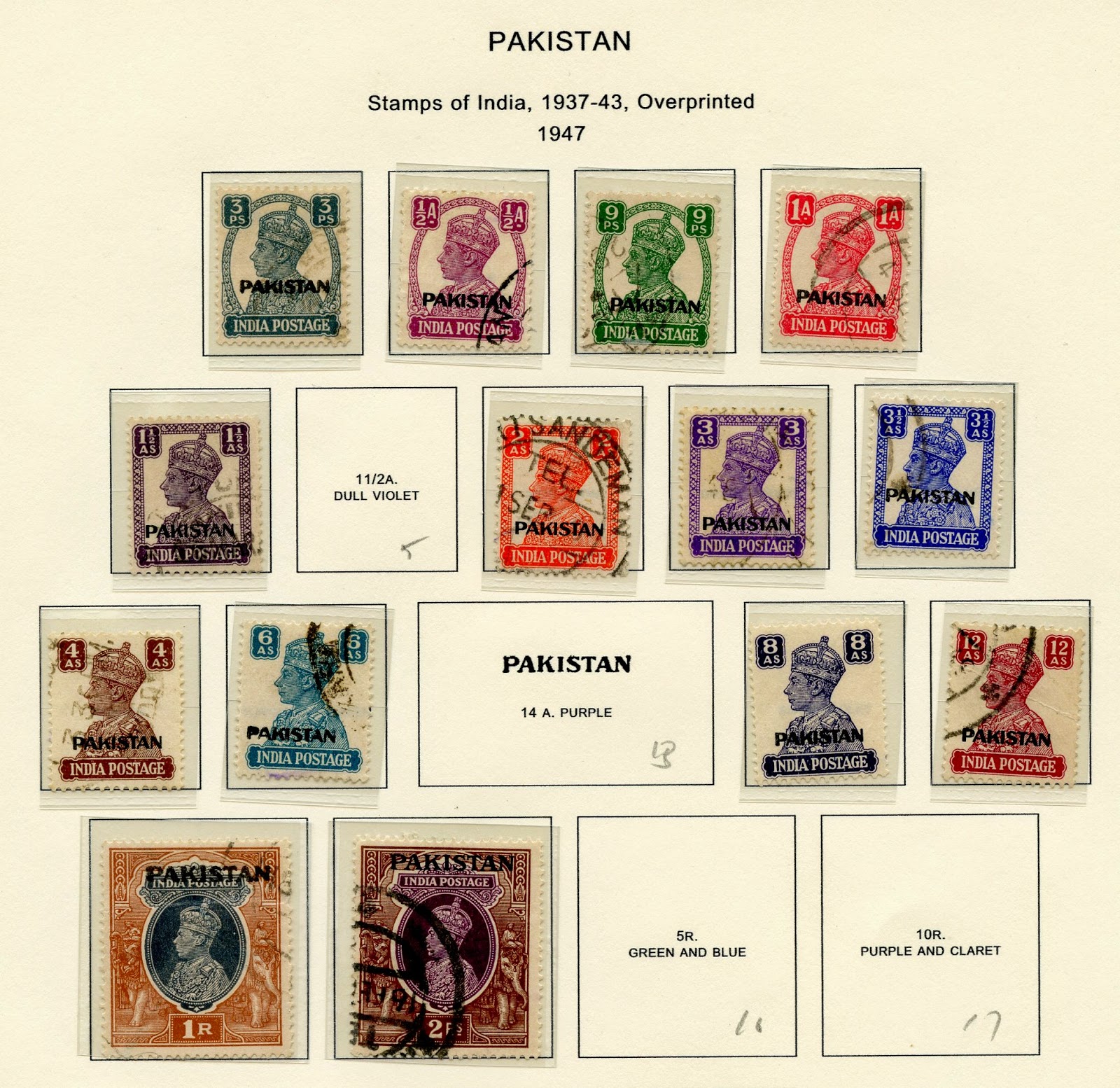 1947 Issue in Deep Blue
Deep Blue (Steiner) has two pages for the overprinted "Pakistan" stamps of 1937-43 India, and includes spaces for all the Scott major numbers. 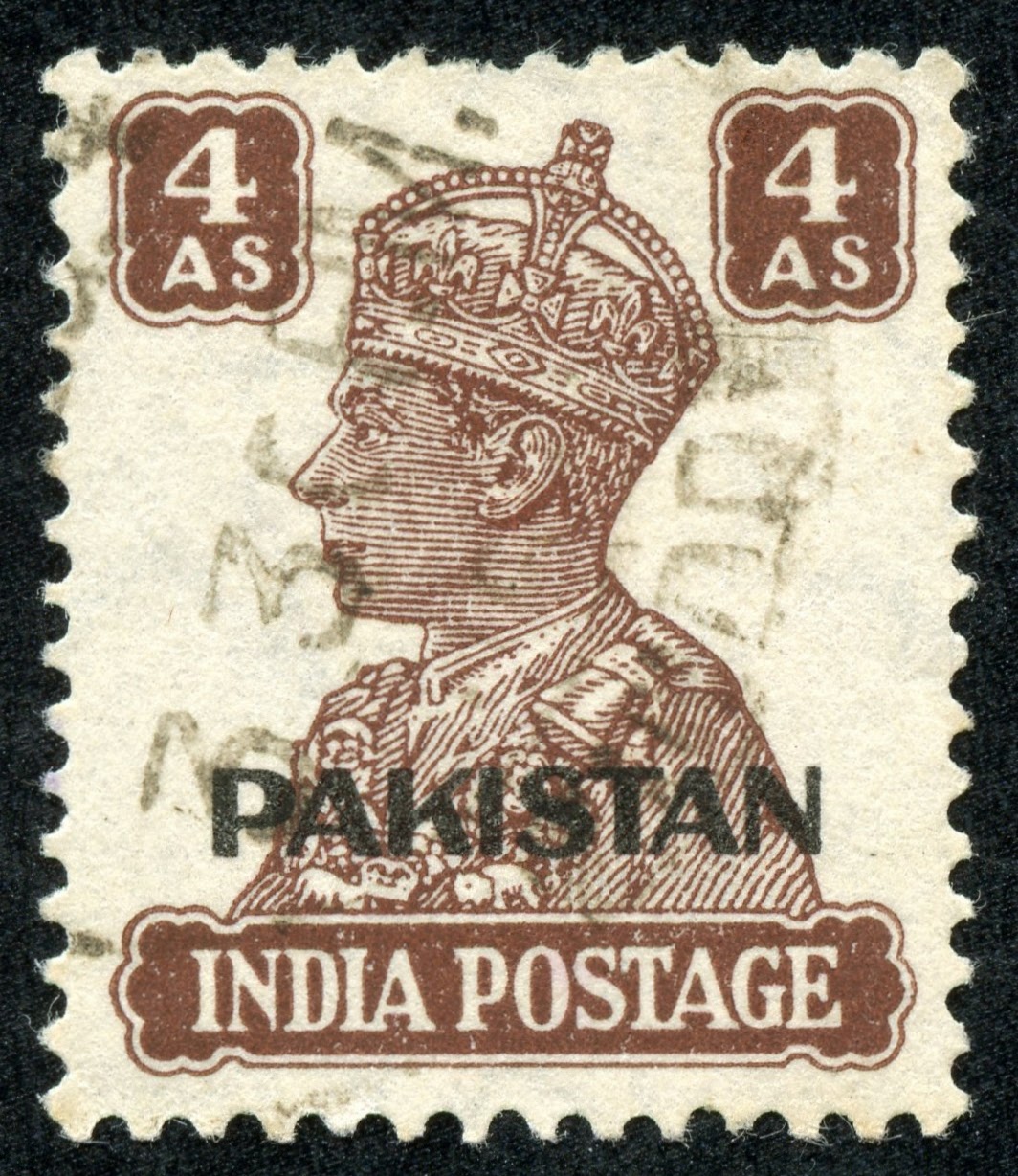 I must admit, though, I am strongly tempted to actively collect the world's stamps of 1940-1949, as WW II and the aftermath create a highly interesting stamp era. ( I am already doing this with the 1940-52 George VI British Commonwealth countries.) 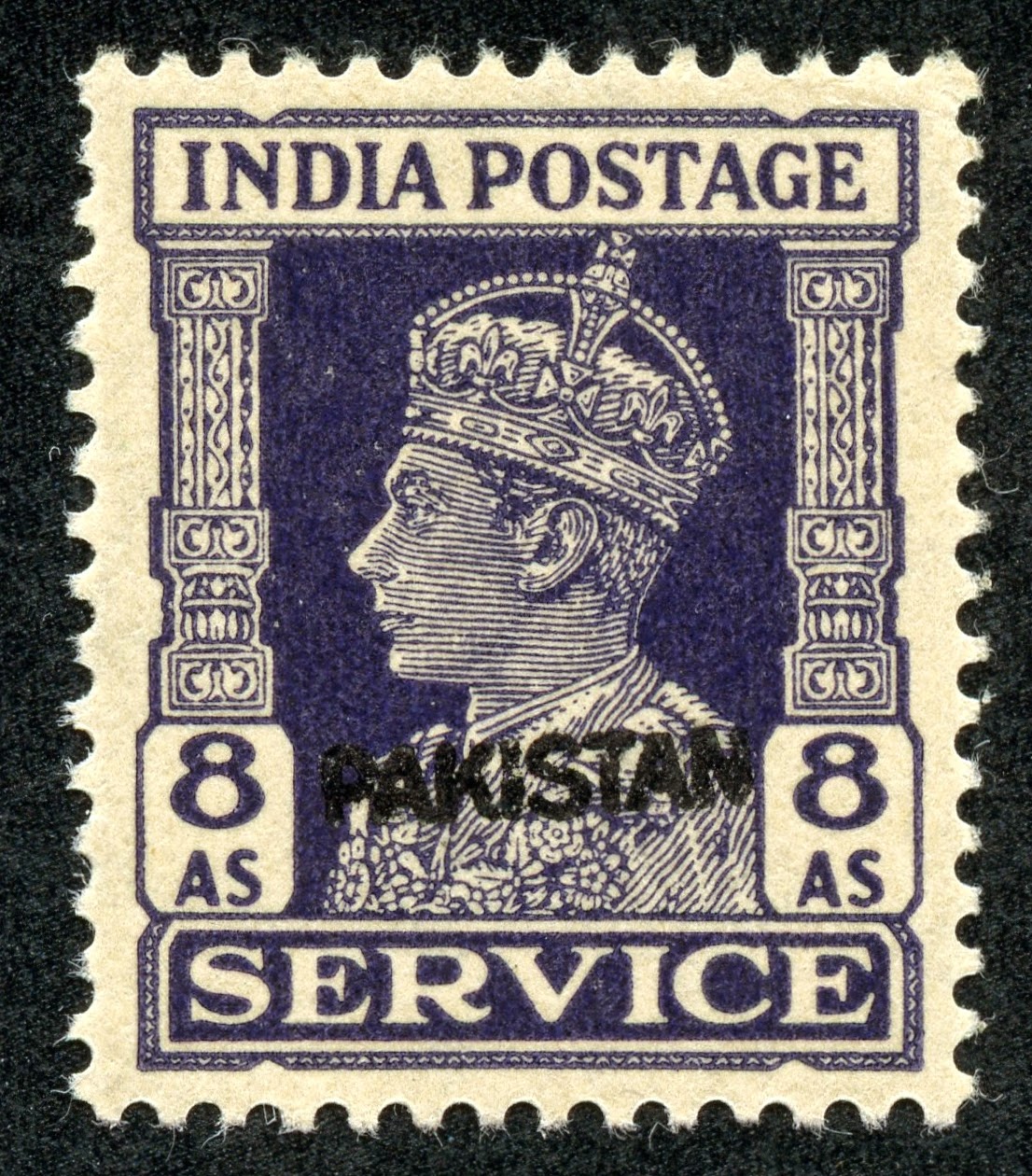 1947 Scott O9 8a blue violet
Out of the Blue
These transitional "Pakistan" overprinted stamps of India do little to exhibit the interesting stamps and history of this important country, which was birthed in 1947.