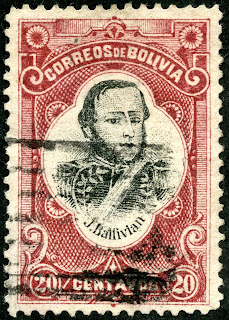 1897 Scott 51 20c lake & black
"General Jose Ballivian 1804-1852"
Into the Deep Blue
Bolivia is one of my favorite classical era countries, but more because of personal relationships. Twenty five years ago, we hosted a high school aged girl from Bolivia through the American Field Service intercultural program.  She was justifiably proud of Bolivia and its natural beauty. She became a member of our family, and we still see each other not infrequently.

One fly in the ointment is there can be forgeries of the earlier stamps, especially the higher values.

As is true for many of the A-E countries when I began the blog in 2011, there was not enough about the stamp issues themselves in the original blog post. This post and the next one will rectify that for Bolivia. 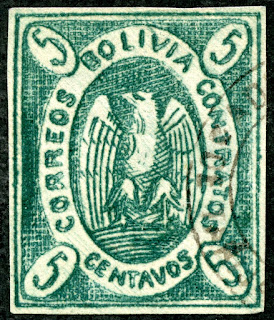 1867 Scott 1 5c yellow green "Condor"
The first eight stamp issue with Scott numbers is the 1867-68 "Condor". These imperforate engraved unwatermarked stamps exist in many varieties: 72 for the 5 centavos. The plate of the 5c was reengraved four times, and retouched at least six times. There are thick and thin paper varieties. There are types and reprints. There are forgeries. Scott recognizes ten major/minor numbers for the 5 centavos. Michel (2017 Klassik Ubersee bis 1900) lists five colors for the 5 centavos. I haven't done the necessary investigation - which would require serious study- to comment further.

The stamp design and presentation appears crude, so there is always a suspicion of forgery. A quick test  to determine engraved (genuine) vs lithographed (forgery) is the aluminum foil test. I have two copies of the 5 centavos, and both showed the raised ridges of an engraved stamp. Whew! 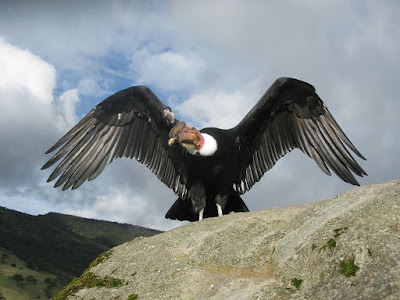 Andean Condor in Bolivia
The Andean Condor is found up and down the Andes, and is on the national crest of Bolivia. For the indigenous people especially, it has been a source of deep spiritual and cultural significance. It is today on the threatened list throughout much of its continental range. 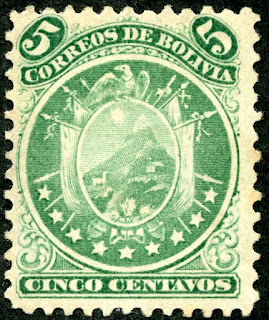 1868 Scott 10 5c green "Coat of Arms"
Nine Stars; Perf 12
In 1868, five engraved stamps with the above "Coat of Arms" design were issued, all with nine stars and Perf 12. The "nine star" design was again used in 1890 for five stamps, but fortunately can be distinguished by different colors.

The "Coat of Arms" design (with various number of stars in the design for issues) was used fairly extensively in Bolivia until 1894. 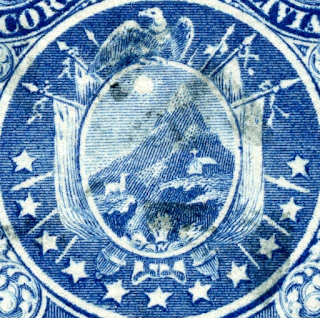 Coat of Arms close-up
The stars in the coat of arms represent the nine Departamentos. The number of stars vary between eleven and nine during the classical era. One of the extra stars (the tenth) probably represents Litoral, which actually was taken over by Chile in 1879 (War of the Pacific) - and Bolivia, losing their access to the Pacific, is still upset about those events even today.

The silver mountain Cerro Potosi (Cerro Rico) is shown - it supplied most of the silver during the New World Spanish Empire. Inti, the Incan sun god, is depicted by the sun. An alpaca is on the plain in front of the mountain.

There are Bolivian flags around the shield. The condor perched on the shield represents the willingness to defend liberty and the nation. 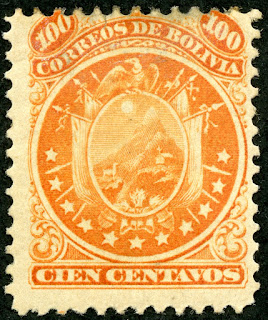 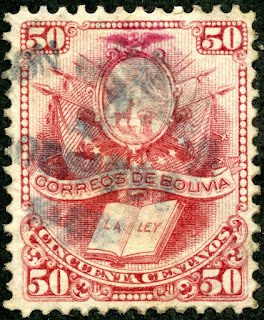 1878 Scott 23 50c dull carmine
Arms and "The Law"
The 1878 four stamp engraved issue breaks up the "Coat of Arms" monopoly with the design addition of "The Law" added. 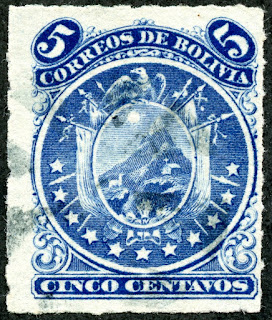 1887 Scott 26 5c blue "Coat of Arms"
Rouletted
The 1887 engraved issue is easy to distinguish, because it is rouletted, rather than perforated. 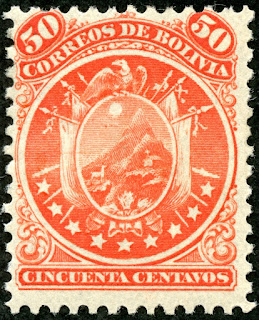 The 5 centavos to 100 centavos (five stamps) are identical in design to the 1868 issue, but in different colors. 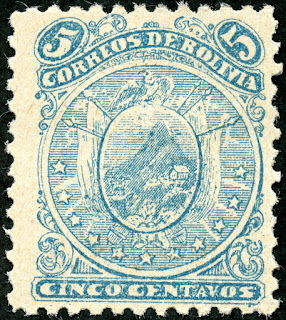 1893 Scott 37 5c blue "Coat of Arms"
Lithographed; Perf 11
This definitely looks different, doesn't it? That is because the 1893 five stamp issue is lithographed, while all the other "Coat of Arms" issues were engraved. The issue also has a perforation 11. 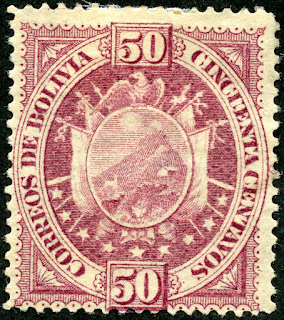 But many collectors will find that the majority of their stamps are on thick paper. Why? 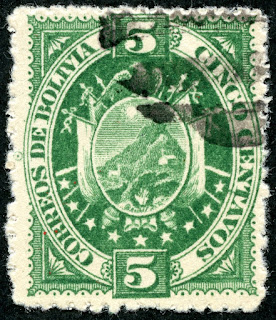 "Stamps of 1894 type on thick paper were surreptitiously printed in Paris on the order of an official and without government authorization. Some of these stamps were substituted for part of the shipment of stamps on thin paper, which had been printed in London on government order. When the thick paper stamps reached Bolivia, they were first repudiated, but then allowed to do postal duty. A large quantity of the thick paper stamps were fraudulently cancelled in Paris with a cancellation of heavy bars forming an oval. Value of unused set: $5."

To collect legitimate 1894 issue stamps, look for those with thin paper. If one accepts a thick paper stamp (except as a space filler), it should have a genuine Bolivian cancel. 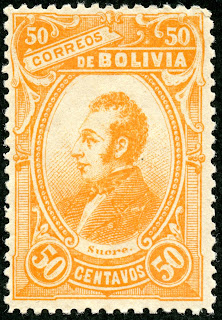 1897 Scott 52 50c orange
"General Antonio Jose de Sucre 1795-1830"
Lithographed; Perf 12
On March 15, 1897, an eight stamp lithographic issue in a large tall format was released. The issue featured Bolivian history with various portraits of presidents, generals, and patriots. Michel has a note that forgeries are plentiful, although no specifics are given. I imagine the fact that the originals were printed lithographically would make it easier for forgers to imitate. 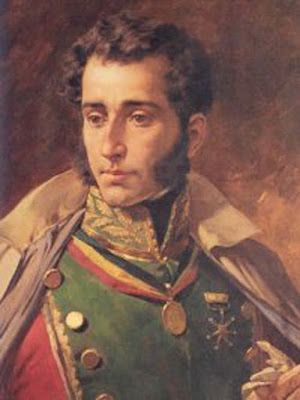 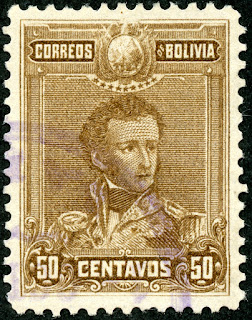 Scott states the issue is on thin paper. But my 1b violet is on very thick paper. Michel has a note that the 50c bister brown and the 1b violet can be found on thick paper, issued in 1908. 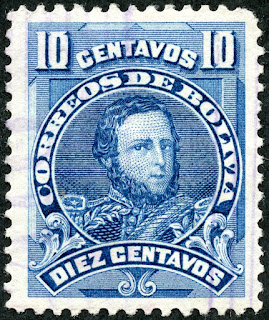 1901-02 Scott 74 10c blue "Jose Ballivian"
Engraved
Between 1901-02, a new six stamp engraved issue was produced, with various portraits, and the "coat of arms" for the highest 2b denomination.

The engraved 1c claret was reissued in 1904 as a lithographic printing. 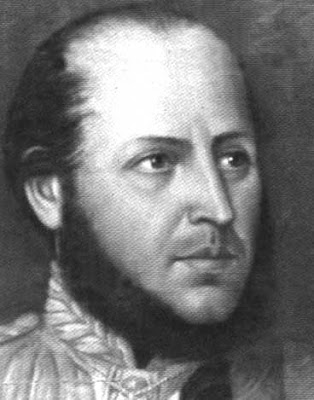 Jose Ballivian (1805-1852)
Jose Ballivian was a general in the Peruvian-Bolivian Confederation War (1836-39), and became president of Bolivia in 1841. A civil war erupted, and Ballivian had to flee in 1847. He is honored even today as one of Bolivia's greatest presidents. 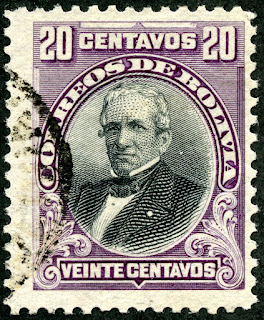 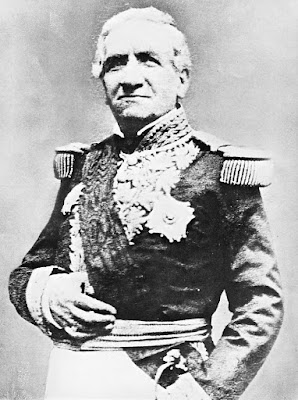 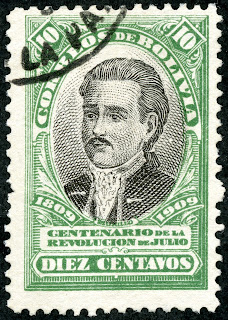 1909 Scott 79 10c green & black
"Murillo"; Lithographed; Perf 11
For the Centenary of the Revolution of July, 1809, a four stamp lithographic issue was produced.

Patriots are shown in portrait, and in bi-color. 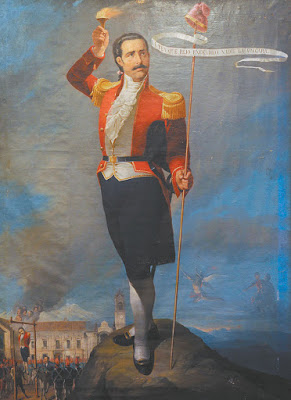 Painting representing the execution of Murillo
Pedro Domingo Murillo (1757-1810), a patriot, played a key role in the quest for Bolivia's independence. When he was hanged by royalist troops on January 29, 1810 in La Paz, he made this statement:

"Compatriots, I die, but tyrants won't be able to extinguish the torch I ignited. Long live freedom!" 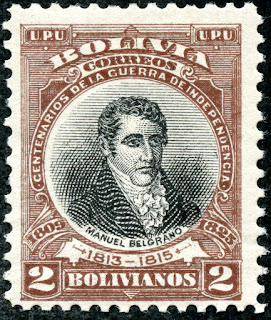 The stamps honor the patriots of the era. 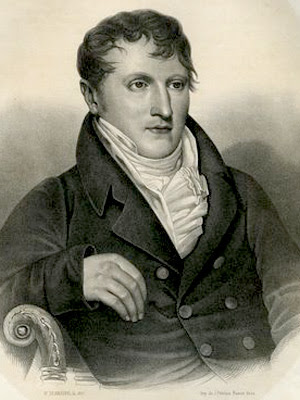 Manuel Belgrano
Manuel Jose Joaquin del Corazon de Jesus Belgrano (1770-1820) was well educated, having studied in Europe and absorbing the thought of the Age of Enlightenment. He was capable of understanding Spanish, English, French, Italian, and indigenous languages. He designed the flag of Argentina. He was a military leader in the War of Independence, and was involved in the campaigns of Upper Peru (Bolivia). He is considered one of the main Libertadores of Argentina. 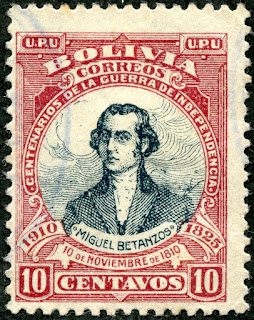 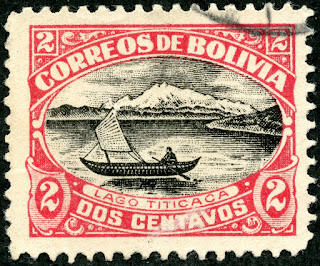 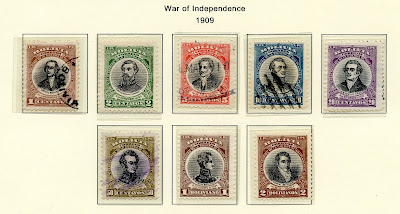 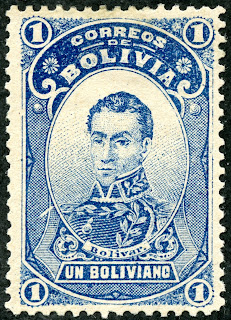 1907 Scott 53 1b Prussian blue
"Bolivar"; Lithographed
Out of the Blue
Bolivia is mostly inexpensive to collect for the WW enthusiast. Take advantage and perhaps dive a little deeper into the issues!

Note: Quote regarding the bogus thick paper 1894 issue stamps is from the 2017 Scott catalogue, and is used for educational purposes. The portrait scans appear to be in the public domain.