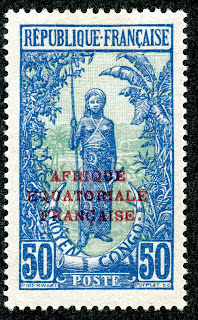 1924 Scott 40 50c  blue & green
"Bakalois Woman", red overprint
Quick History
The area north of the Congo River in Africa has been under French influence since 1880.

But, the Gabon-Congo area was renamed Middle Congo (Moyen-Congo) in 1903. Then in 1906, Gabon and the Middle Congo were separated, and the "French Congo" as such no longer existed. Subsequently, the colonies (Middle Congo, Gabon,) were re-united in 1910 as "French Equatorial Africa", but had their own stamp production until 1933.

Moyen Congo
I couldn't find an individual map of "Moyen Congo".  But here, one can see it was a section of "French Equatorial Africa" in 1920. 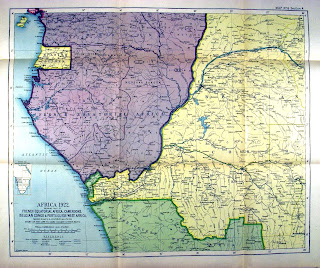 French Equatorial Africa (Purple) in 1922
"Moyen Congo" is the lower section next to Belgian Congo
The Capital was Brazzaville, and the population was 740,000 in 1936.

The economy was based on natural resource extraction.

When the Nazis occupied France during WW II, Brazzaville was the center of  the African "Free France" resistance between 1940-43.

Today, the lands are part of the Republic of the Congo (Congo-Brazzaville). 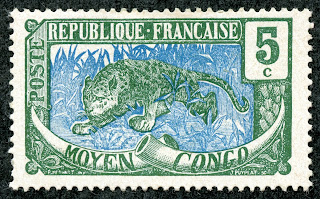 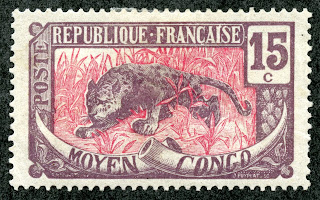 1917 Scott 8 10c brown violet & rose "Leopard"
The first issue for the Middle Congo was a 22 stamp production for 1907-22. The three designs ( Leopard, Bakalois Woman, Coconut Grove) were initially introduced on the 15 stamp 1900-04 French Congo issue. The "Congo Française" inscription on the French Congo stamps was changed to "Moyen Congo". But who's complaining? - They are lovely stamps!

The "Leopard" is found on the nine lower denominations of the series. CV is <$1-$4. 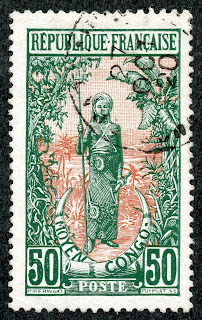 1907 Scott 17 50c blue-green & red
"Bakalois Woman"
I was not able to find out more about the Bakalois- probably a member of the Kongo ethnic group.

The "Bakalois Woman" design is found on the ten middle denominations. The CV is $1+-$2 for 7 stamps. Incredible portrait. 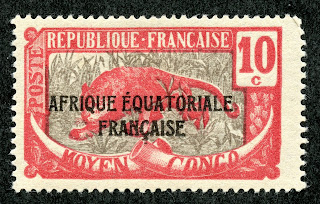 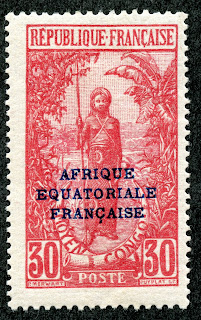 1924 Scott 34 30c rose & pale rose
Blue overprint
Twelve more stamps were overprinted with the "Bakalois Woman" portrait. The overprint can be found in black, red, or blue. CV is <$1-$2+ for 11 stamps. 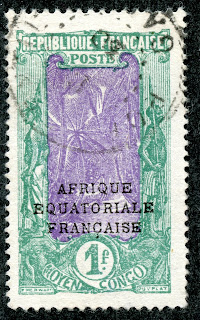 Of interest, the 1924-30 overprinted issue has, at least, nine new denominations or colors that are not found with the original 1907-22 issue. In other words, these new colors and denominations are only available with the "Afrique Equatoriale Française" overprint. 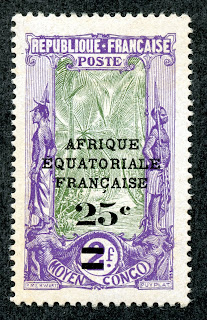 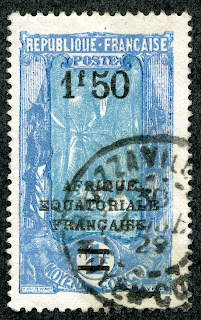 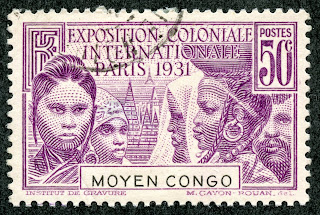 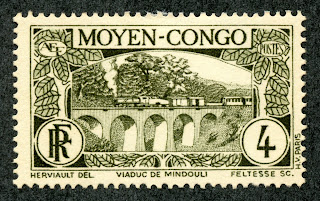 1933 Scott 67 4c olive green
"Viaduct at Mindouli"
In 1933, a 24 stamps issue was produced with three designs: The Viaduct drawing (above), and a drawing of the Pasteur Institute and the Government Building in Brazzaville respectively. This was the last large regular issue for the Middle Congo. CV is <$1-$2 for 17 stamps. 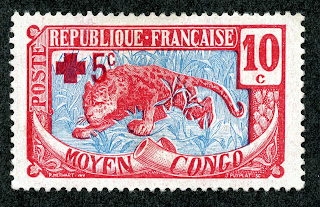 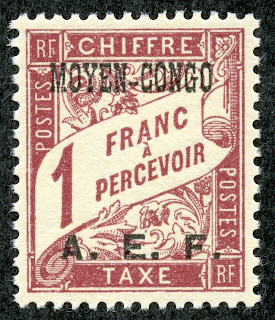 1928 Postage Due Scott J9 1fr brown red
Stamps of France, overprinted
I think it is somewhat surprising- and amusing- how many of the French colonies have a large number of issued postage due stamps. Did they really need that many? ;-) Here, the Middle Congo has a total of 33 postage due stamps.  Meanwhile, a literate country like Norway got by with 12 stamps during the same era. 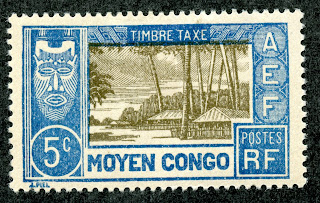 1930 Scott J12 5c deep blue & olive
"Village on Ubangi, Dance Mask"
An 11 stamp postage due issue was released in 1930. The French, to their credit, use interesting local designs generally on their colonial postage due stamps. 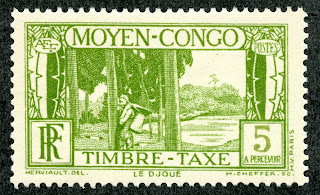 As mentioned, by 1936, only French Equatorial Africa stamps were issued, and stamps from the Middle Congo ceased. 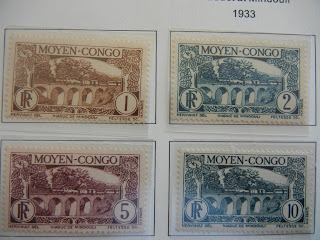 1933 "Viaduct at Mindouli"   stamps in Deep Blue
Deep Blue (Steiner) has Middle Congo on 10 pages. No problem with recognition, as the Scott catalogue is followed closely for the major number spaces. 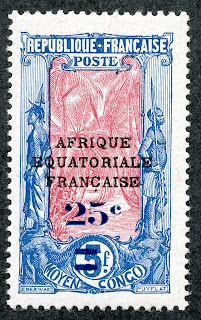 Observations
• Two 1933 issue blank spaces give the most expensive stamps ($20+,$30+) for the Middle Congo.
• Excellent coverage by BB! I could only find seven stamps CV $1+ that are not in the album.

Alert: BB space error: Scott 15 is 40c dull green & brown "Bakalois Woman", a vertical stamp. And BB presents a horizontal space for it! This BB space error has persisted at least since the 1940s editions. The practical solution is to put the vertical stamp-Scott 15- in the horizontal space. It will have to be fudged a bit to fit, and put partially in the margins - especially for the '69 editions and later editions where, because of the redesign of spaces,  there is less space for it. As an alternative, you could also substitute the 1907 Scott 9 20c brown & blue "Leopard", a horizontal stamp, in the space. The 20c brown & blue was, in fact,  placed in the 1928 Scott International in this space.

Comments
A) Expensive stamps ($10 threshold):
1933 (Scott 86) 5fr slate blue ($20+)
1933 (Scott 88) 20fr dark brown ($30+)
B) (  ) around a number indicates a blank space choice.
C) *15 is 40c dull green & brown "Bakalois Woman", a vertical stamp. And BB presents a horizontal space for it! This BB space error has persisted at least since the 1940s editions. The practical solution is put the vertical stamp-Scott 15- in the horizontal space. It will have to be fudged a bit to fit, and put partially in the margins - especially for the '69 editions and later where there is less space for it. As an alternative, you could also substitute the 1907 Scott 9 20c brown & blue "Leopard", a horizontal stamp, in the space. The 20c brown & blue was, in fact,  placed in the 1928 Scott International in this space. 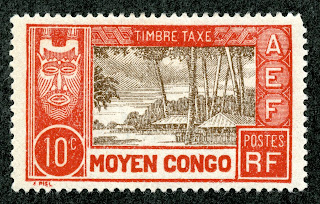 1930 Scott J13 10c deep red & brown
"Steamer on Ubangi River"
Out of the Blue
French design stamps never cease to attract- and they provide a window into African life some 80 years before. What's not to like? ;-)