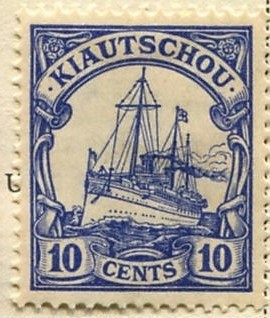 I decided, since they’re all in the German Pacific area and their stamps feature mostly the Kaiser’s yacht, to make one brief post about all three: Kiauchau, the Mariana Islands, and the Marshall Islands.

As noted in several of this blog’s posts, Germany was, in the late 19th century, a greenhorn at colonization schemes. Initially, Bismarck opposed German colonial expansion, then capitulated to pressures from pro-imperialist business leaders who thought they were missing out on big profits. As it turned out, the colonies cost more to establish and maintain than they were worth. Commerce never thrived. Nevertheless, Germany did scrape a few colonies together which, if not cost-effective, were thought necessary for established the Aryan race as pre-eminent.

I think the Kaiser’s yacht, Hohenzollern II, is a telling symbol in this regard. It reflects not only Germany’s economic ambitions, but also its determination to advance the master race. “Social Darwinism,” not an idea developed by Charles Darwin himself but by Herbert Spencer, holds that Darwin’s theory about survival of the fittest can be applied to human societies, thereby validating all sorts of social inequalities such as imperialism, classism, sexism, and racism. Spencer’s thought readily grafted onto Germany’s late 19th century nationalistic agenda. This strain of Social Darwinism sank to its lowest, of course, a few years later with Hitler at the helm. 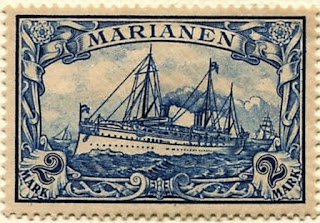 The yacht, steaming through the waves while leaving lesser ships behind, is clearly a fit vessel and a befitting badge for a master race. At the time, however, there were not many “Arians” living in Kiauchau, the Mariana Islands, and the Marshall Islands. Those few no doubt felt their chests swell with pride upon seeing the stamps. Hohenzollern II herself never sailed that far from home, though. And, I imagine, the stamps rallied little enthusiasm among Asians. 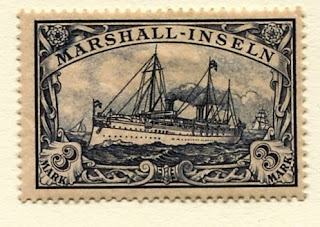 If you want to read a bit more about the history of each place, as well as maps, check out my posts on...