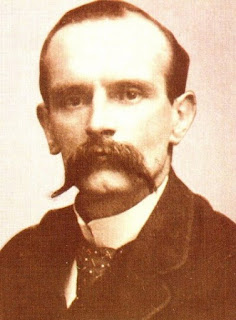 Northern Nigerian stamps (1900-1912) are boring unless you like key plates with British crowned heads as vignettes.

However, Northern Nigeria does offer an intriguing case study of how postal service gets started in a colony where none exists, or almost none, for the Royal Niger Company, the predecessor of Northern Nigeria, did operate a few post offices prior to 1900.

The story is best told through the annual reports of the Northern Nigeria High Commissioner, F. D. Lugard (1). What follows is a series of excerpts from his annual reports from 1901 to 1915.

Arriving at the end of December, 1899, I took over the administration from the Royal Niger Company, and the Union Flag was hoisted in place of the Company's, at 7.20 a.m,, at Lokoja, on January 1st, 1900, in presence of a parade of all arms, at which all civilians were present in uniform. …

I regret to say that owing to the continual illness while in Nigeria, and subsequent resignation, of Mr. Adye, the difficulty of procuring any trained Postal Clerks and other causes, I found this Department, on my return, at the close of 1901, in a somewhat chaotic state. Statistics, furnished by the Acting Postmaster, of the number of letters, parcels, &c, received and sent are as follows; they are possibly inaccurate. The Department needs, and will receive, thorough re-organisation. There are two regular Offices, viz., Jebba and Lokoja. Letters received 315,480; letters sent 31,196; parcels received 1,440; parcels sent 641. 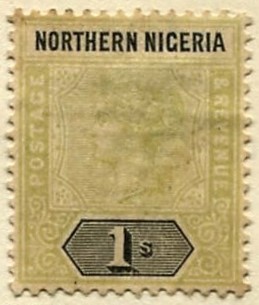 The great increase in [postal] revenue (£783 in excess of the estimate) was due chiefly to the large orders for stamps given by collectors, which will probably not be maintained. The cost of the postal service of course has been very greatly increased during 1902 by the inclusion of the new and distant Provinces. I have recently drawn up full postal regulations, with the assistance of Mr, Somerville, and planned as effective a scheme of postal delivery as is possible with the means at command. The General Post Office is at Lokoja, with a branch at Zungeru. The headquarters station of each Province is a sub-postal station, and the Resident is the Postal Officer.

The nitty-gritty of Lugard’s postal organization and regulations appears in a document titled Order in Council and Proclamations … Protectorate of Northern Nigeria … October, 1904. (2) 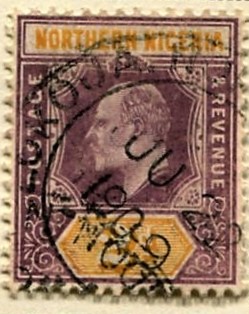 Scott #12 violet and orange, cancel 22 July 1909 at Lokoja,
on the Niger and Benue rivers, where Lugard “took over”

From the Commissioner’s report of, 1909. [Lugard left Northern Nigeria in 1906 to become the Governor of Hong Kong, in part because his wife found Nigeria’s climate inclement. 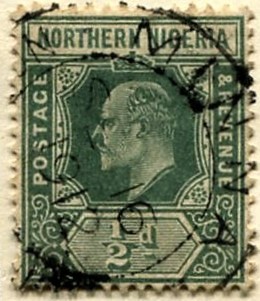 From the report of F. D. Lugard, Governor General, 1912. [Lugard returned to Nigeria in 1912 to oversee the amalgamation of Northern and Southern Nigeria].

At the date of their institution the postal and telegraph services were almost entirely employed for official purposes. During recent years the services performed for the general public have increased at a rate commensurate with the development of the economic resources of the Protectorate. The deficit between expenditure and revenue of the postal and telegraph services is therefore annually being reduced. The total revenue actually collected during the year [1912] amounted to £10,536, and the value of the work performed free for the Administration is estimated at £11,870. For the first time it can be recorded that the number of postal packages dealt with during the year exceeded one million, an increase of 39.8 per cent, over the number for the preceding year. The mail services have been improved. Formerly all mails received from or dispatched to. the United Kingdom or the Coast Colonies were sorted and bagged at Zungeru or Lokoja, but during the year under review direct mails have been instituted between the United Kingdom and the Coast Colonies on the one hand, and Zungeru, Minna, Lokoja, Zaria, Kano, Jemaa, Ilorin, and Naraguta on the other. Mails are now received at Zungeru and Kano within 18 and 20 days, respectively, of the date of their dispatch from Liverpool. Before acceleration had been made possible by the extension of the railway system these mails took 28 and 49 days, respectively, to arrive at their destination. 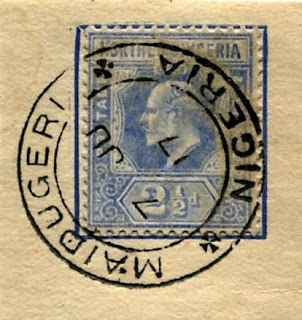 The total revenue collected during 1913 was £15,517, being an increase of 50 per cent, over the revenue for 1912. The value of services performed free for the Administration is estimated at £10,513, or an increase of £243 on the figure for 1912. This increase is small, on account of improvements in the railway service, which have enabled the post to be used where formerly the telegraph was necessary.

From the colonial report of F. D. Lugard, Governor General, 1915

The shortage of £8,597 in postal and telegraph revenue has been caused, for the most part, by a striking shrinkage in the amount spent by stamp dealers in 1915 in the purchase of stamps from Nigeria.

For his efforts as a colonial administrator, Lugard was raise to peerage as 1st Baron Lugard of Abinger. In retirement, he wrote a book titled The Dual Mandate in British Tropical Africa, 1922 (3), the two mandates being “to open Africa to the civilized world and at the same time open the African mind to civilization.” He regarded postal and telegraphic services as essential for both mandates.

Widely acclaimed in his day, Lugard’s views have been severely criticized if not wholly rejected in recent years. Citing Lugard’s brutality, a Nigerian professor recently observed “no matter how wide the gate of heaven is Frederick Lugard will never get there.” (4) 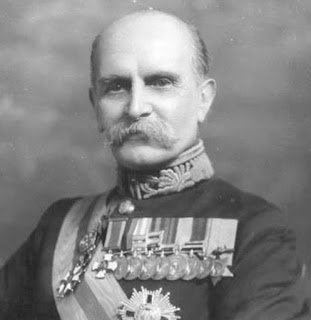 1) All quotations are taken from the “Annual Report of the Colonies, Northern Nigeria” for the years indicated. These are available online and found by searching the words in quotation plus the year of the report.

2) The actual postal regulations developed by Lugard can be accessed at the following web address, then using the provided search function for “postal”: https://www.google.com/books/edition/Orders_in_Council_and_Proclamations/9VgSAAAAYAAJ?hl=en&gbpv=1&dq=inauthor:%22Nigeria,+Northern.+Compilations%22&printsec=frontcover 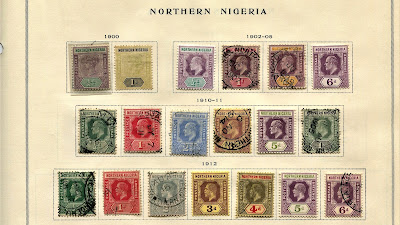 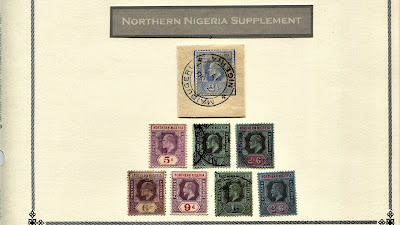