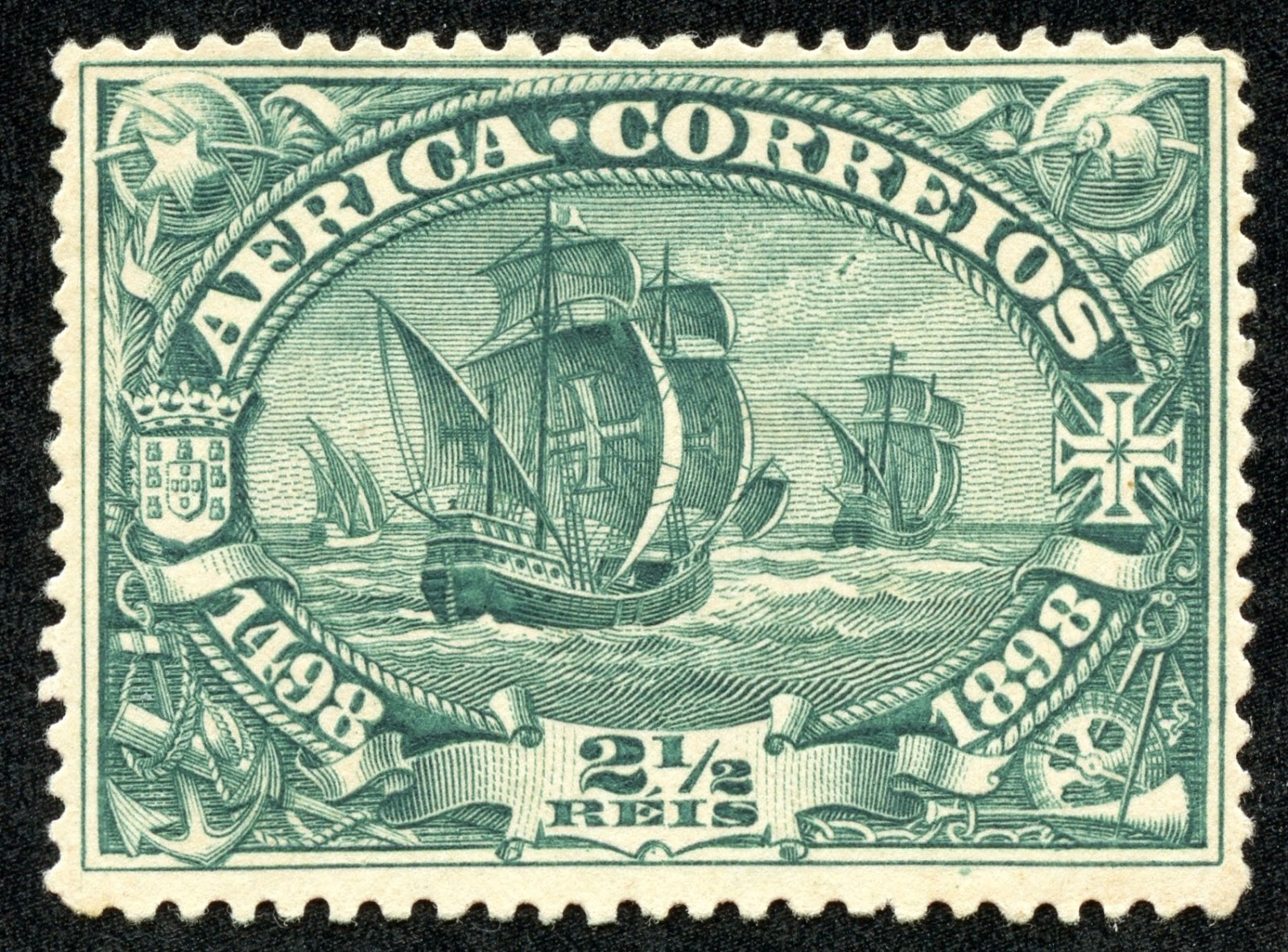 1898 Scott 1 2 1/2r blue green "Fleet Departing"
Vasco da Gama Fourth Centenary
Quick History
Spain and Portugal, after the discovery by Spain of the New World by Christopher Columbus in 1492, agreed to divide the world outside Europe between themselves by the Treaty of Tordesilhas in 1494. 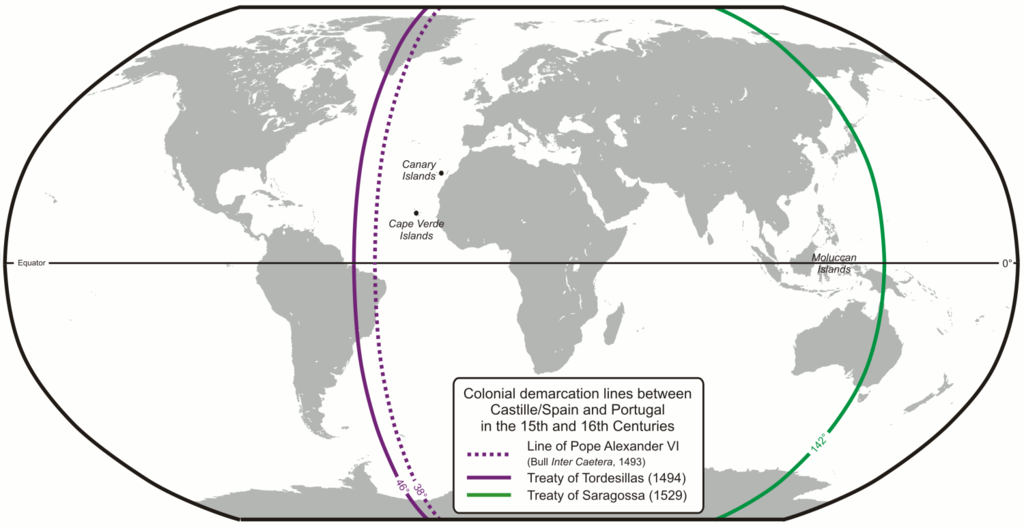 One part of the world to Portugal, one part to Spain
Treaty of Tordesilhas 1494
Dom Vasco da Gama, the Portuguese explorer, was the first European to reach India by sea in 1498. 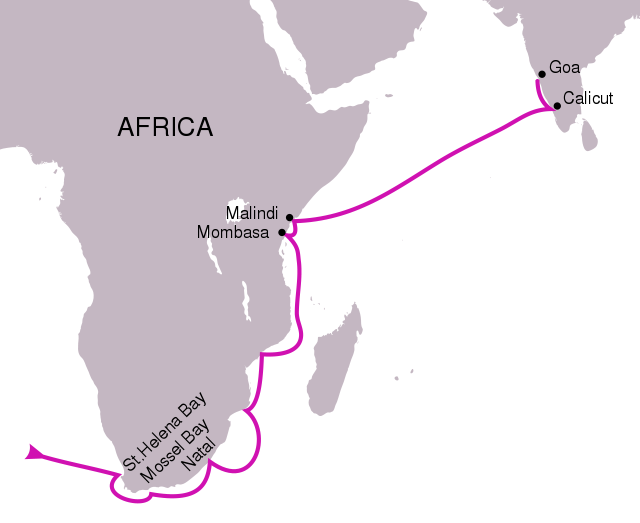 First voyage (1498) by Vasco da Gama around Africa
Vasco da Gama left Lisbon on July 8, 1497 with a four ship fleet and 170 men. He returned with two ships and 55 men. !!!  (Many died from scurvy.) The main ships were the Sao Gabriel (San Gabriel), the flagship, and commanded by Vasco da Gama; the Sao Rafael (San Rafael), commanded by Paulo da Gama, Vasco's brother; and the Berrio (also known as Sao Miguel (San Miguel).

The ships rounded the Cape of Good Hope, spent March 2-29, 1498 near Mozambique island, and sailed north along the coast to Malindi in East Africa.

So began the Portuguese presence in Africa. 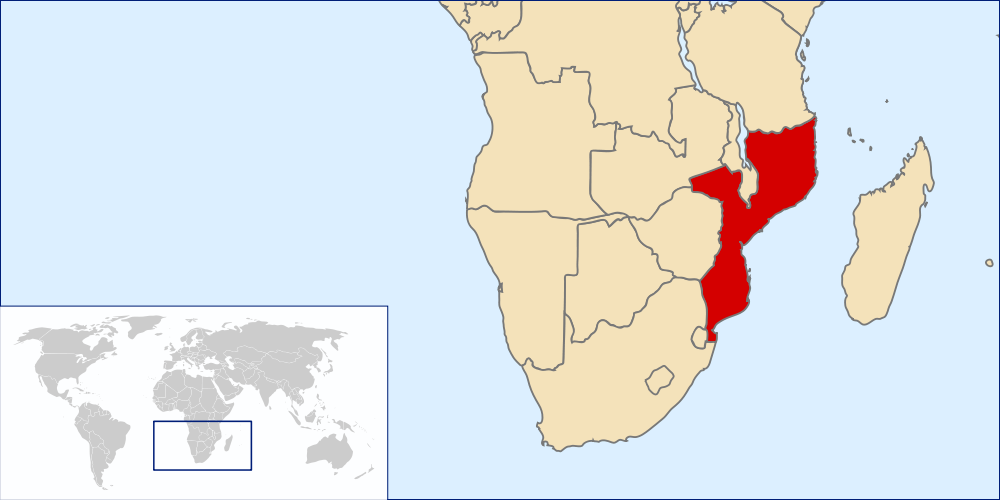 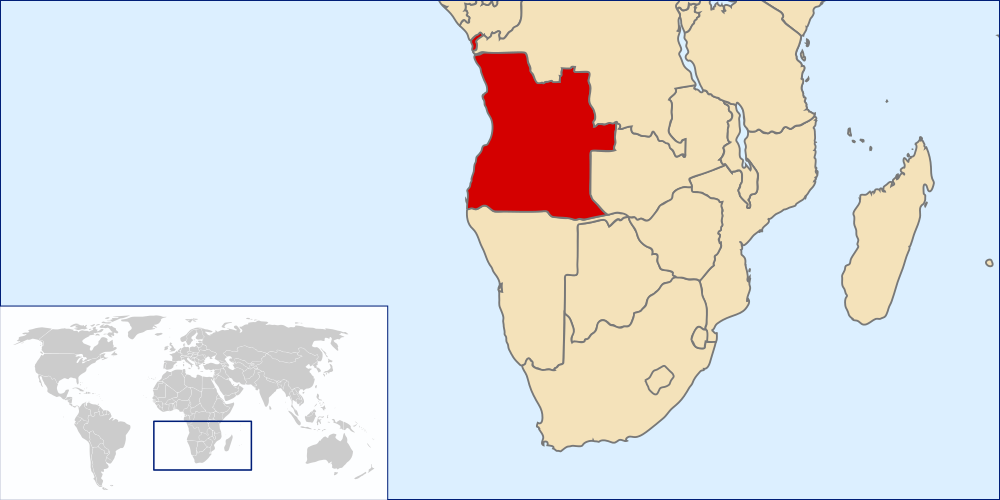 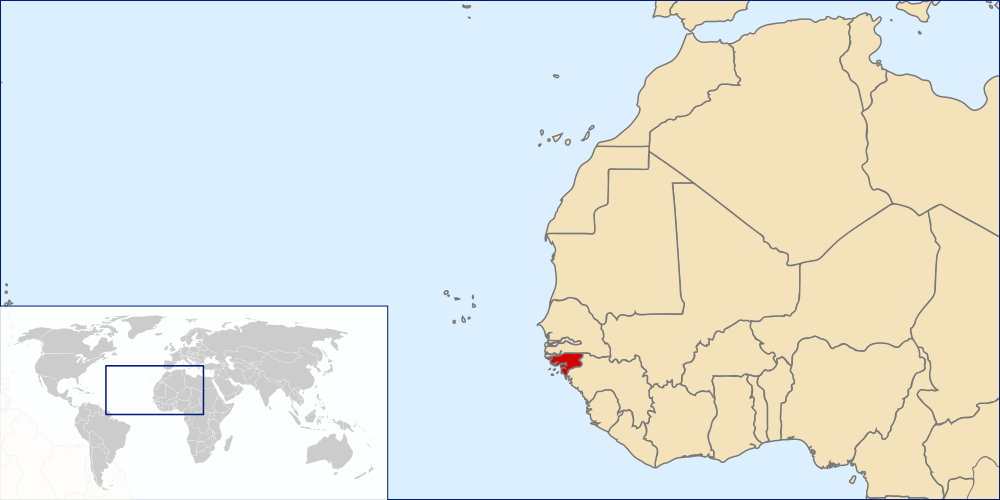 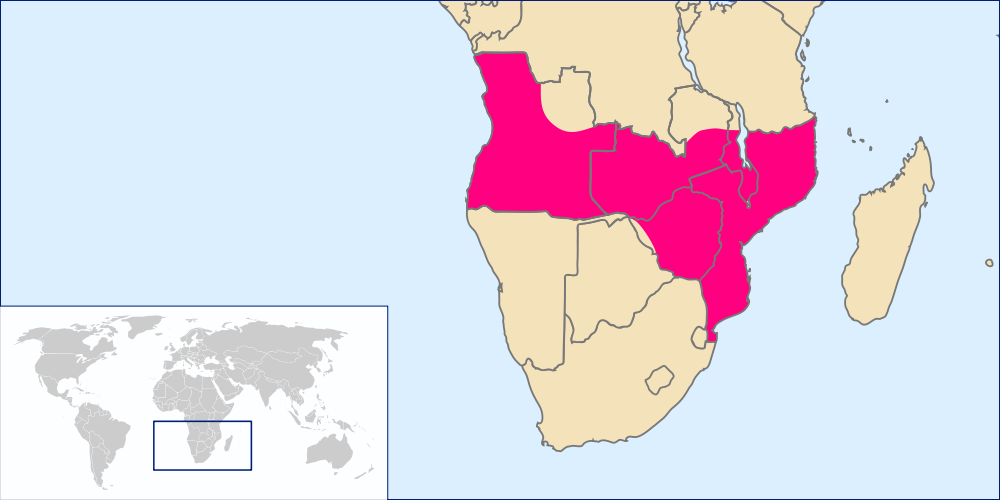 The "Pink Map" (Mapa cor-de-rosa) was prepared in 1885 to show Portugal's claim of sovereignty over the territories between Angola and Mozambique. 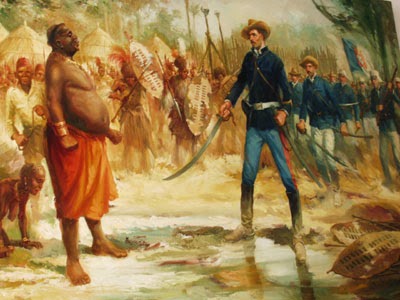 Mouzinho de Albuquerque makes Gungunhana captive
Chamiti, Gaza, Mozambique December 28, 1895
Portugal tried to assert their authority over the natives in the Mozambique interior (see pic above), as well as the land bridge between Angola and Mozambique.

But Great Britain, a much more powerful competitor, was having none of that.

The 1890 British Ultimatum required a humiliating retreat from the land bridge by the Portuguese military, greatly damaging the prestige of King Carlos, and ultimately encouraging the Republican revolution of 1910.

"Portuguese Africa", as such, does not exist physically, but was an administrative entity, by presumption, to supply "stamps", as needed, to any African colony. And only the Vasco da Gama 1898 "common" issue, and three 1919 war tax stamps were ever released.

I suspect the stamps were not needed much, and real use of them on correspondence would be a specialist's delight. 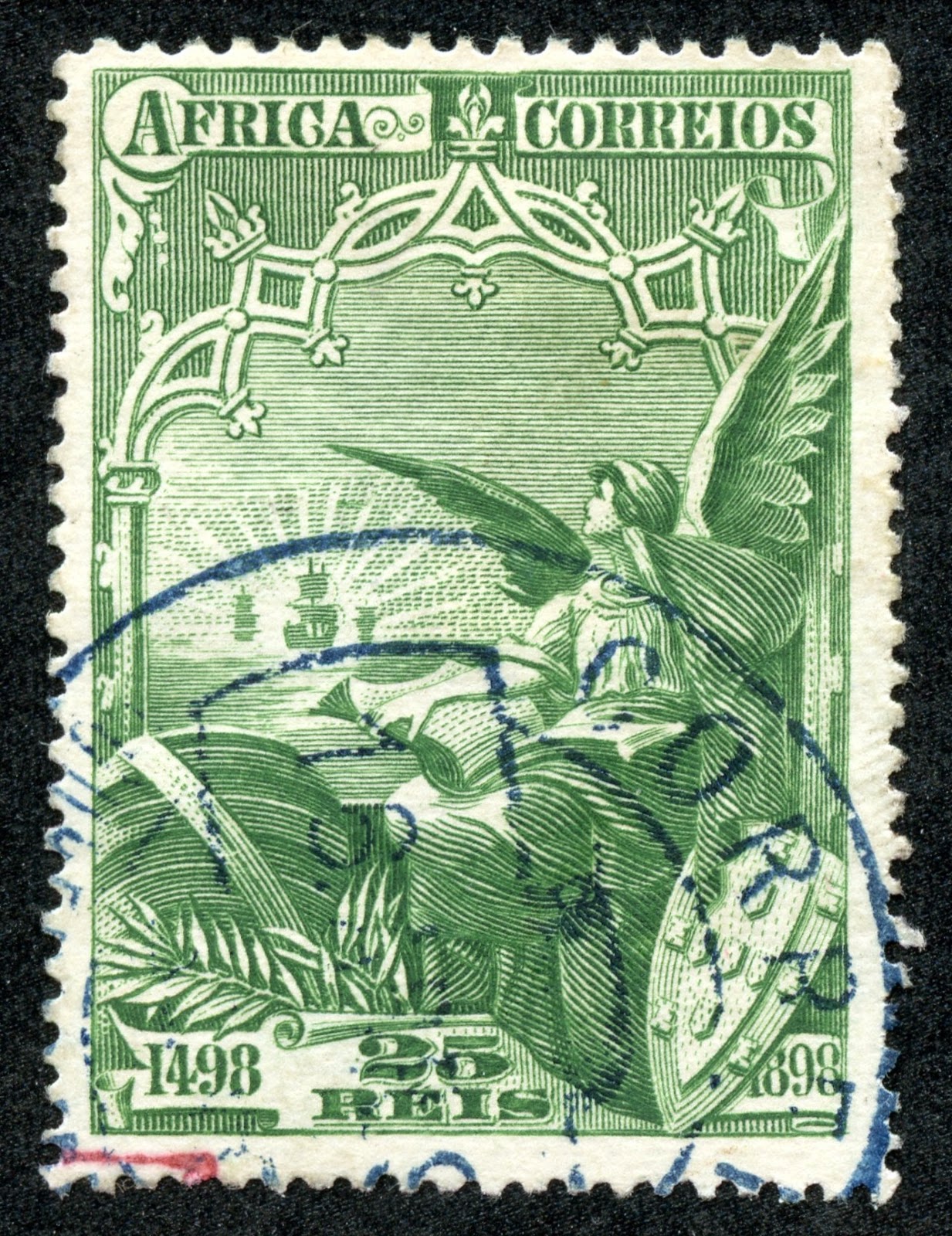 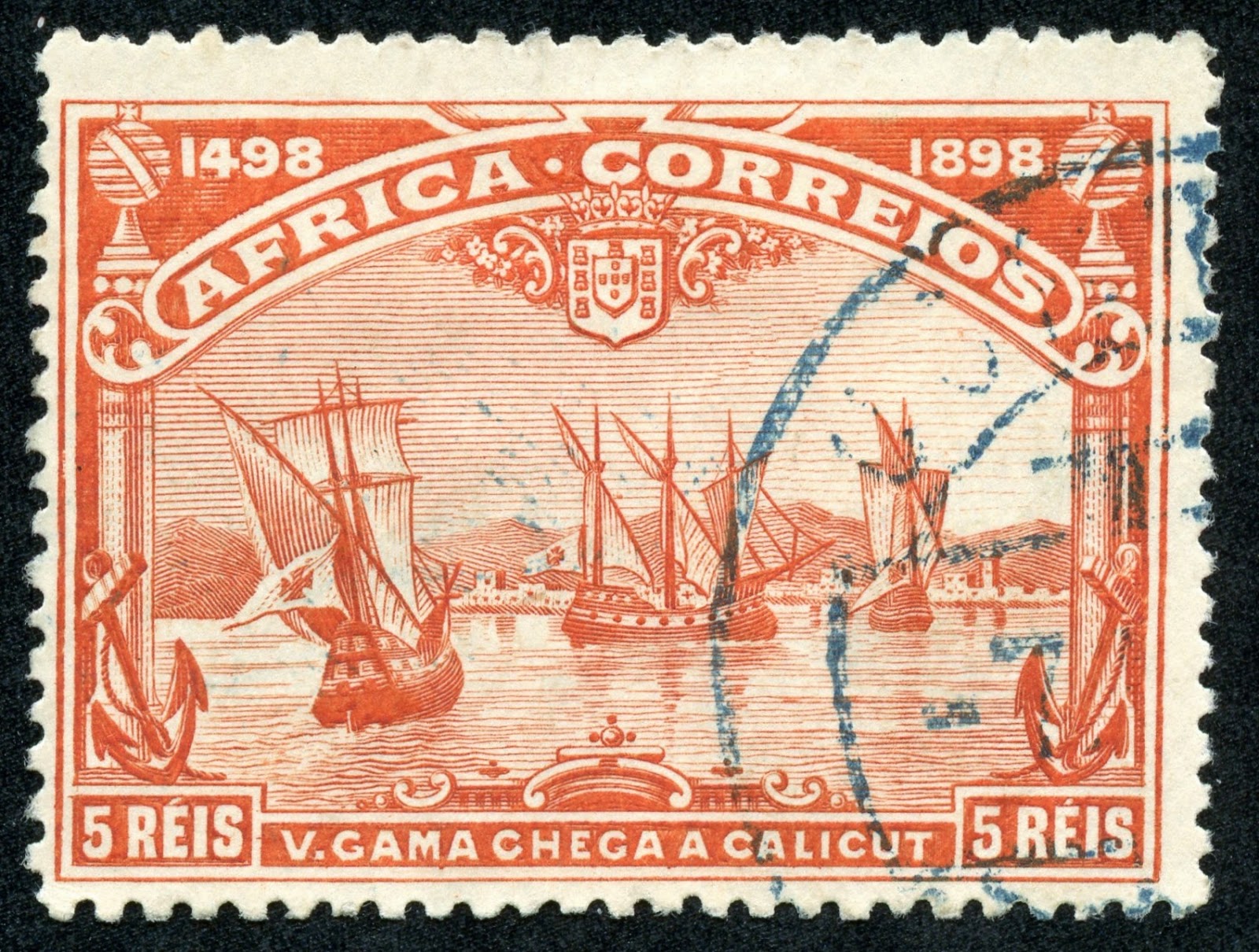 They are lovely engraved stamps, so it is not much of a chore to show them here. 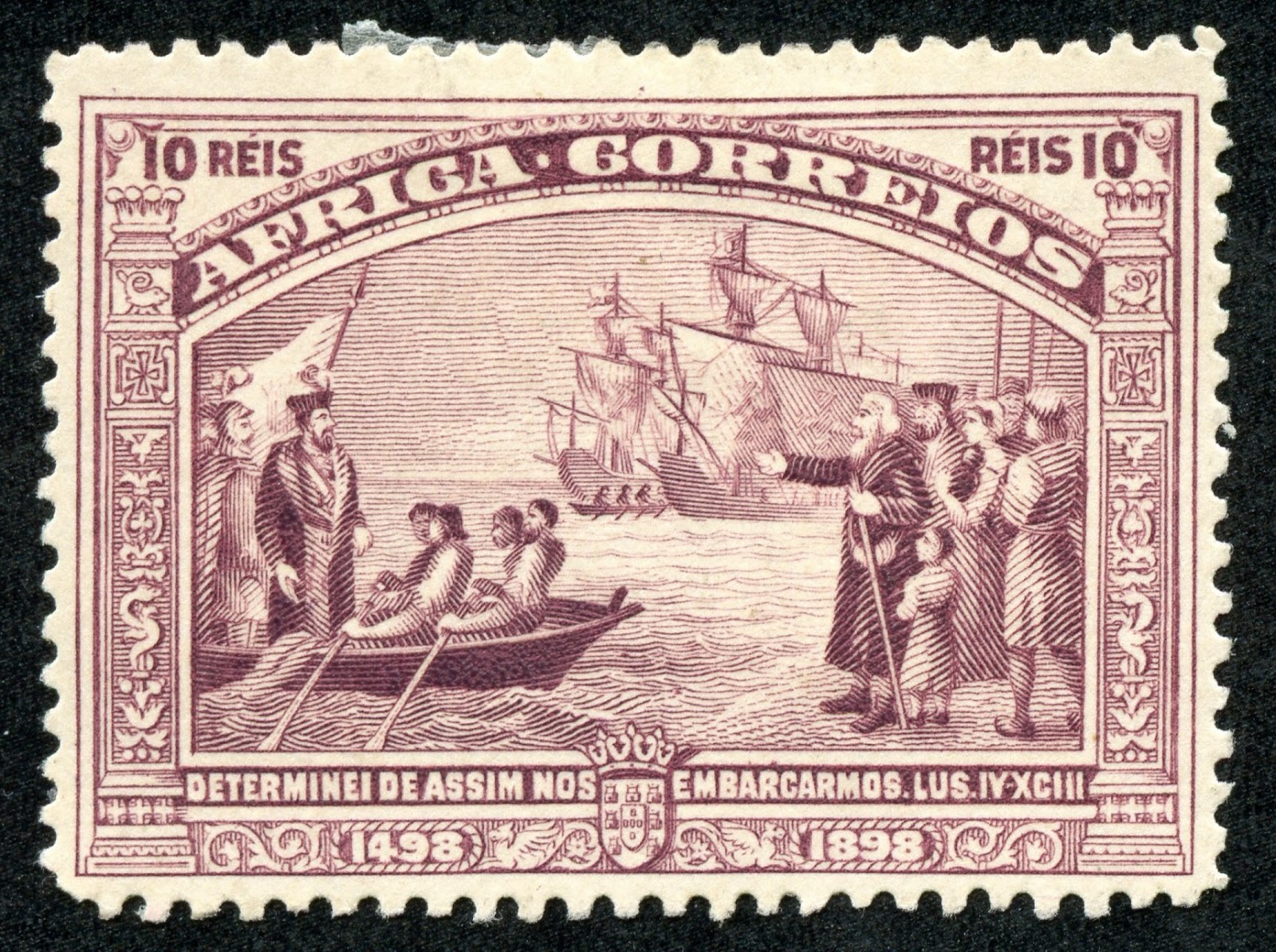 1898 Scott 3 10r red violet "Embarking at Rastello"
The port of Rastello is where many of these voyages began in Portugal. I really couldn't find out more than that with an internet search. 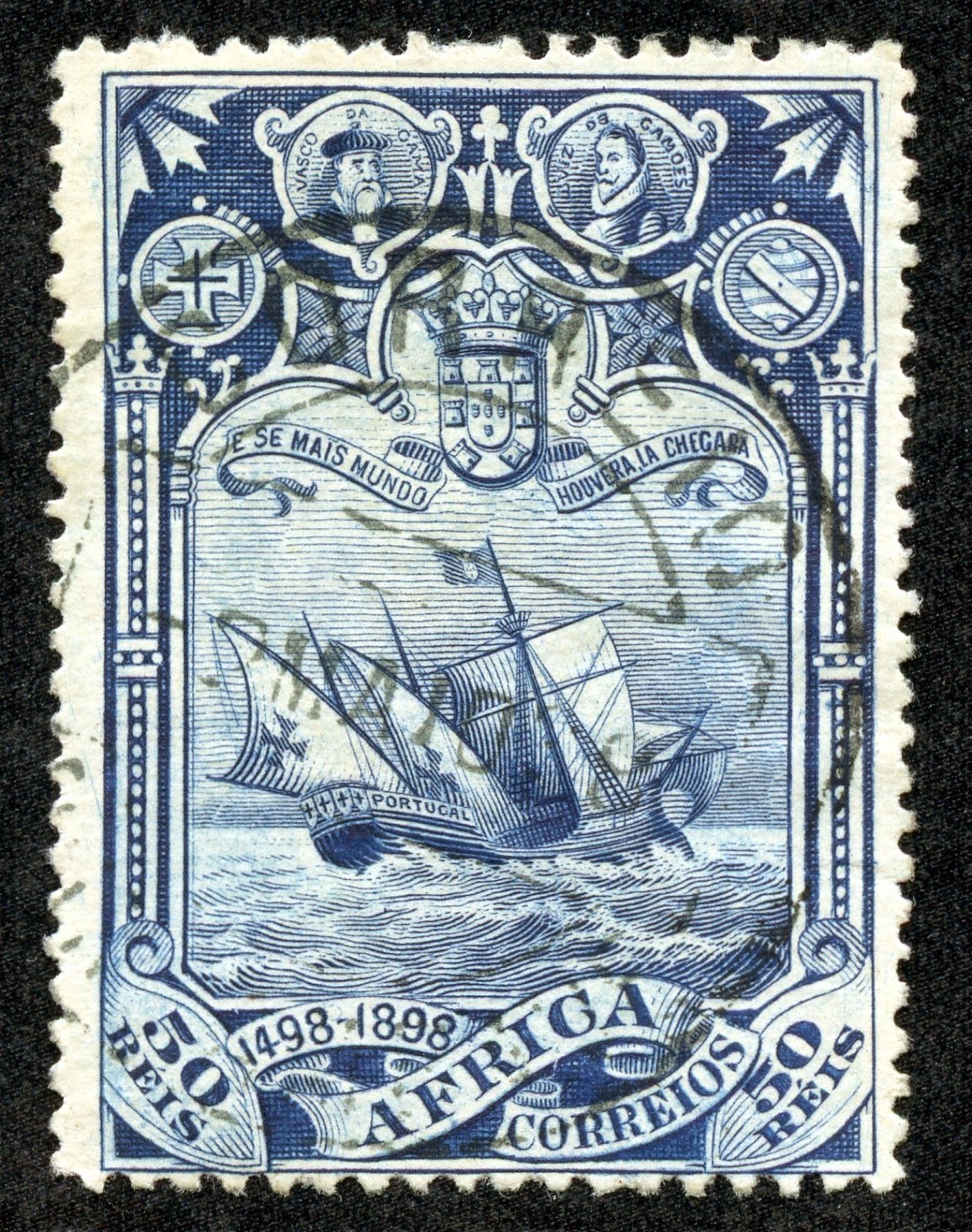 1898 Scott 5 50r dark blue "San Gabriel, da Gama and Camoens"
San Gabriel, the flagship did make it back to Portugal, although the sister ship, San Rafael, was burned and left in East Africa,as it wasn't needed anymore. It is a carrack- a three or four masted sailing ship perfected by the Portuguese for sailing in the Atlantic Ocean.

Would you like to know the daily rations for the crew?
Biscuit 1.5 pounds
Beef 1 pound, or Pork .5 pound
Water 2.5 pints
Wine 1.25 pints
Vinegar .3 gill
Oil .6 gill
Fasting days: rice, fish, or cheese for meat
Fresh fish caught on route
Oranges if available at harbor stops. (Vasco da Gama was aware that citrus fruit was helpful against scurvy. Nevertheless, 116 members of his crew died- most from scurvy. Magellan lost 208 out of 230- mostly from scurvy. Between 1500-1800, it is estimated that scurvy killed two million sailors. !!!!) 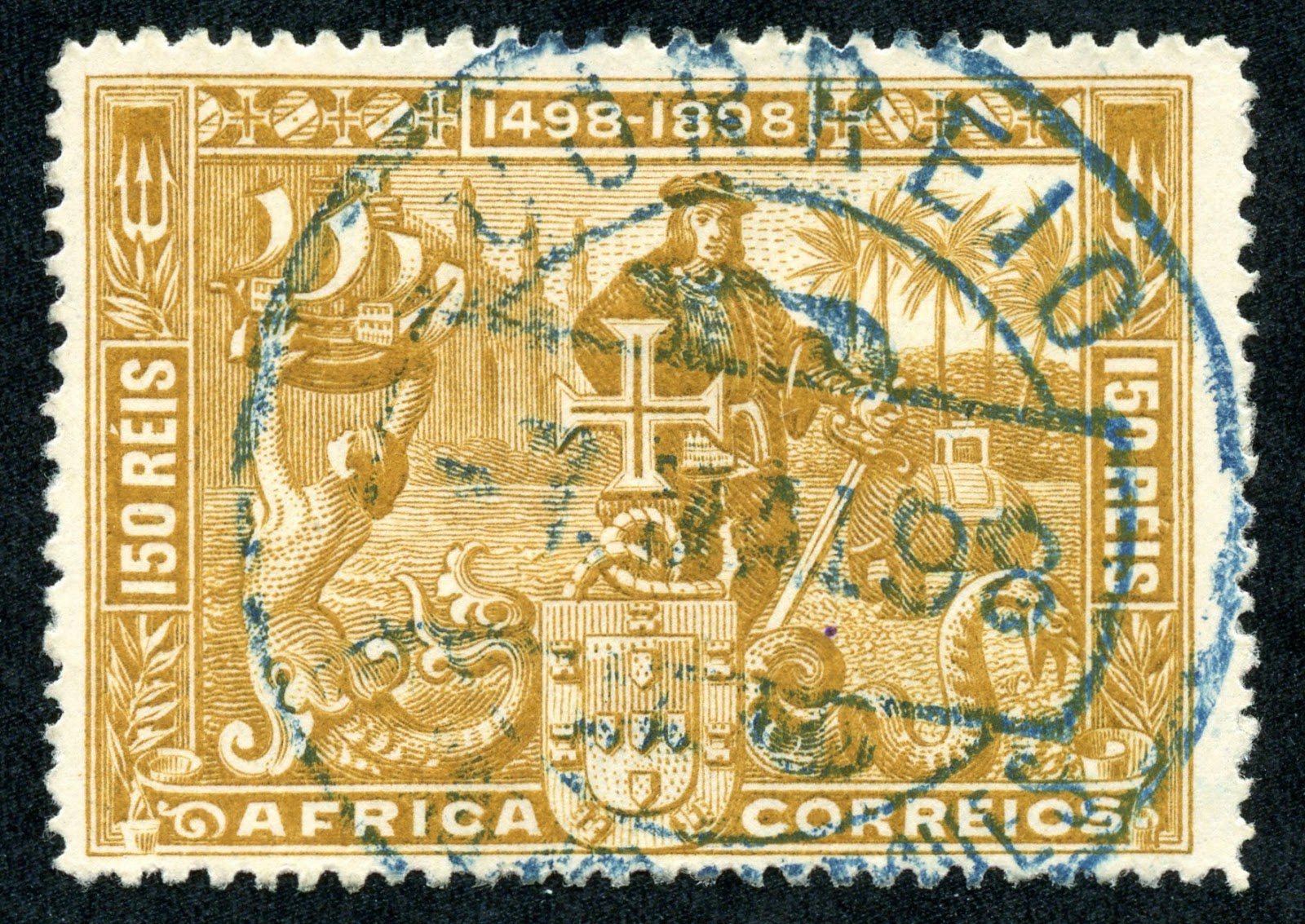 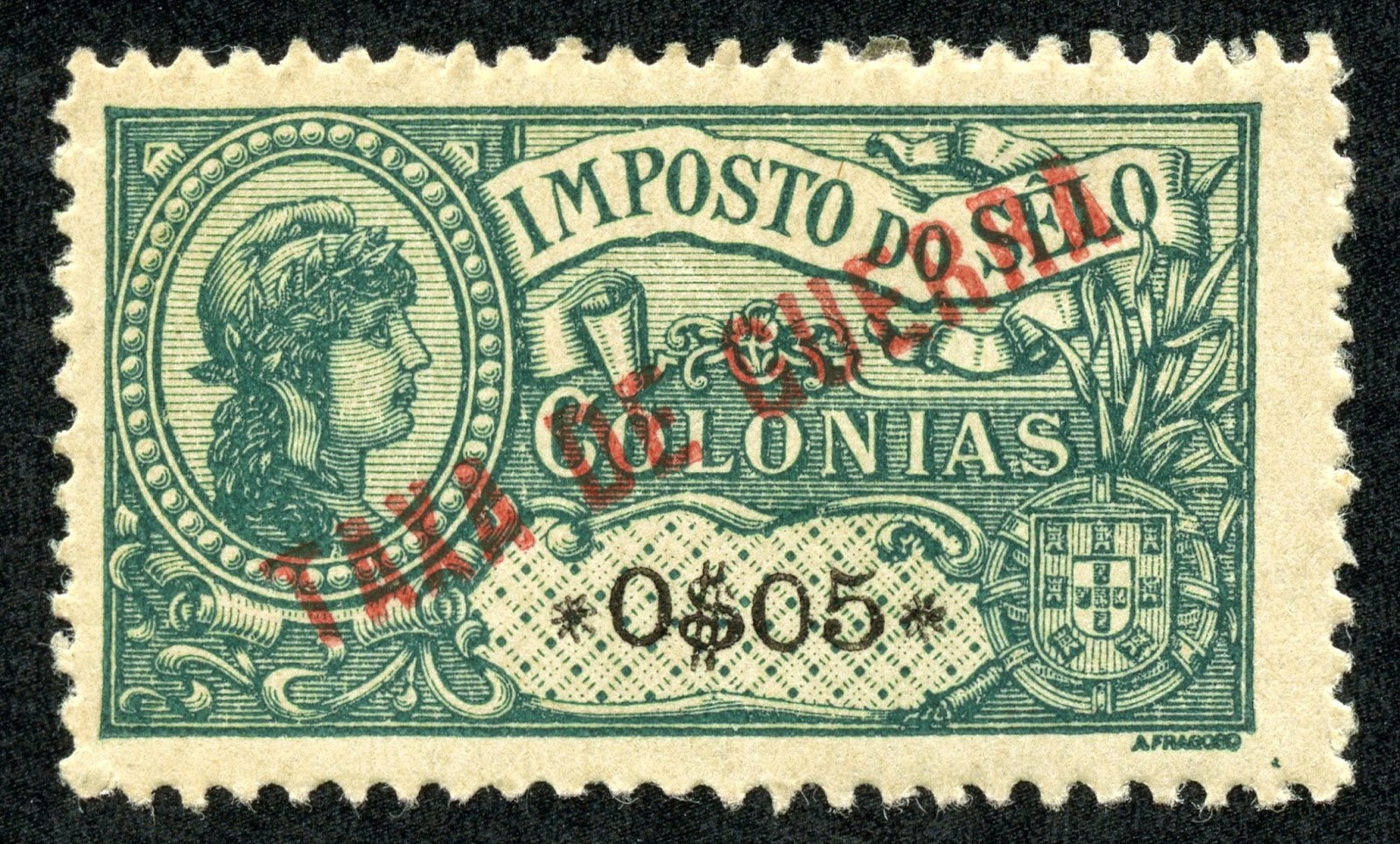 1919 Scott MR3 5c green, carmine overprint, "Liberty"
War Tax Stamps
In 1919, a three stamp "stamp tax" set was used as war tax stamps, They are overprinted in black, orange, or carmine. Of interest, the 4c green has only been found with a fiscal cancellation. Some believe that this stamp (MR2) should be considered a revenue stamp. 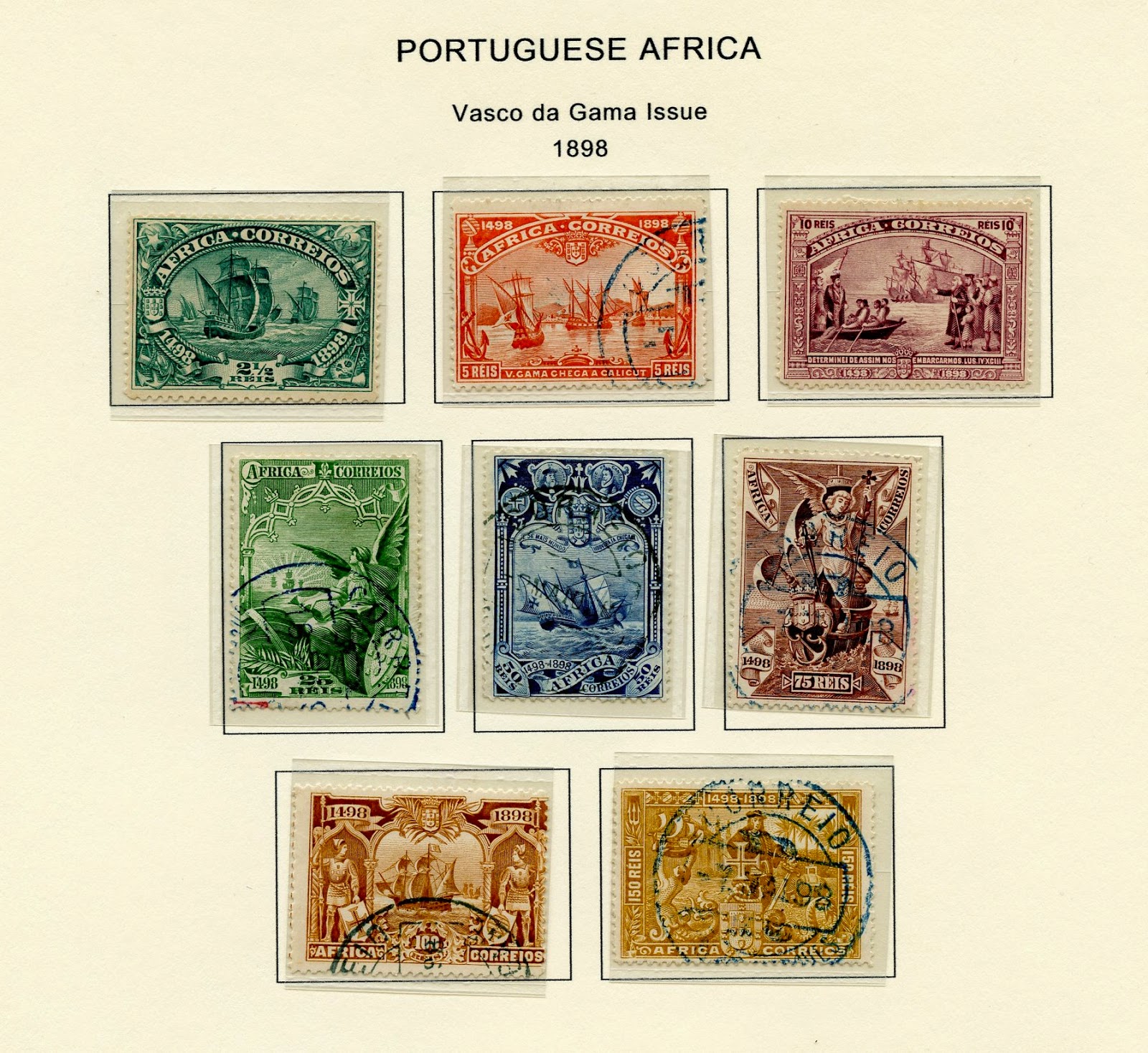 1898 Vasco da Gama Issue in Deep Blue
Deep Blue (Steiner) has two pages for the stamps of Portuguese Africa, and has a space for every stamp. 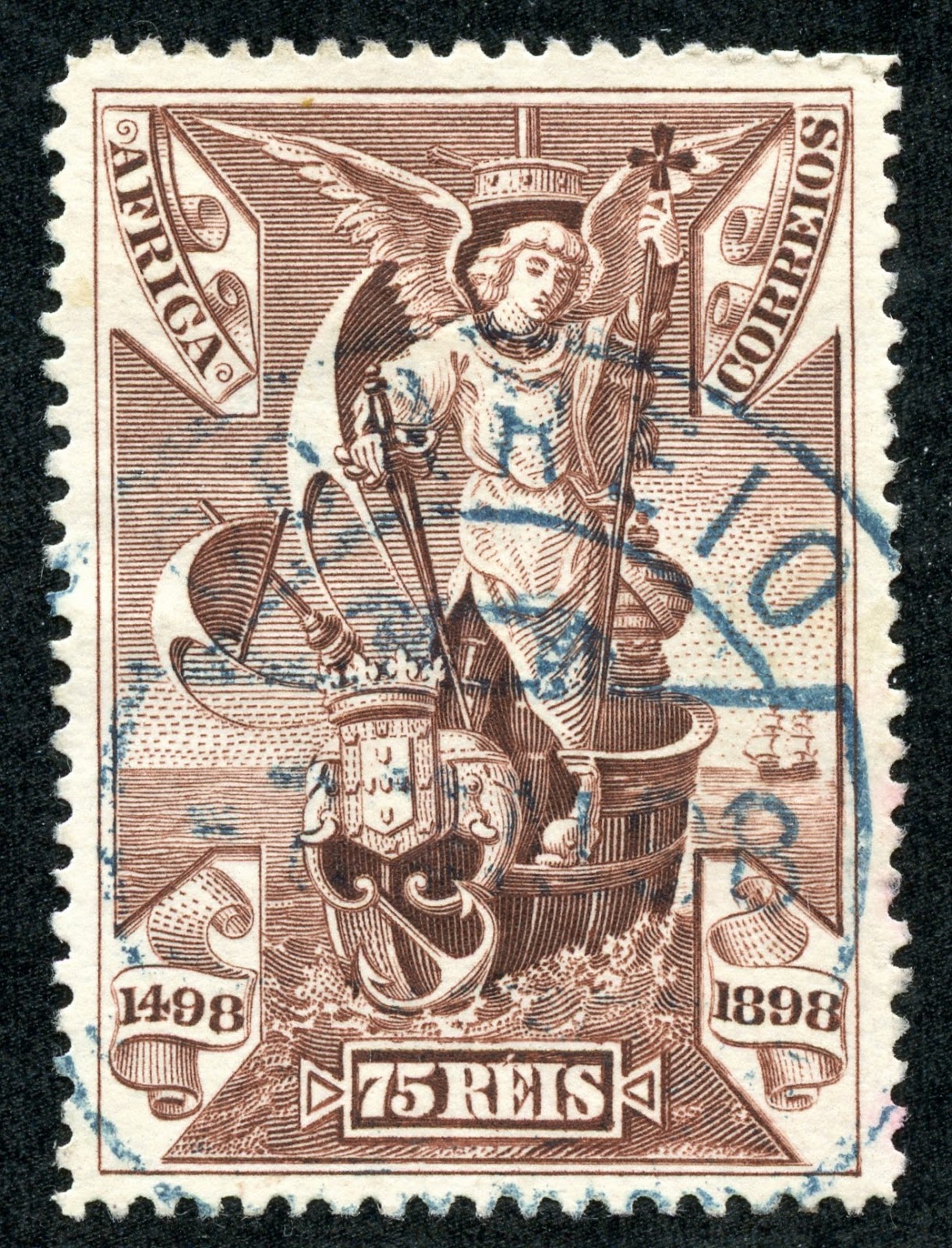 1898 Scott 6 75r violet brown
"Archangel Gabriel, the Patron Saint"
Big Blue
Big Blue '69, has one line of one page for Portuguese Africa, and shares the page with Portuguese Congo. The coverage is found between "Puerto Rico" and "Portugal".

The 40s editions had the same coverage.

Perhaps the three war tax stamps could have been included (<$1-$1). 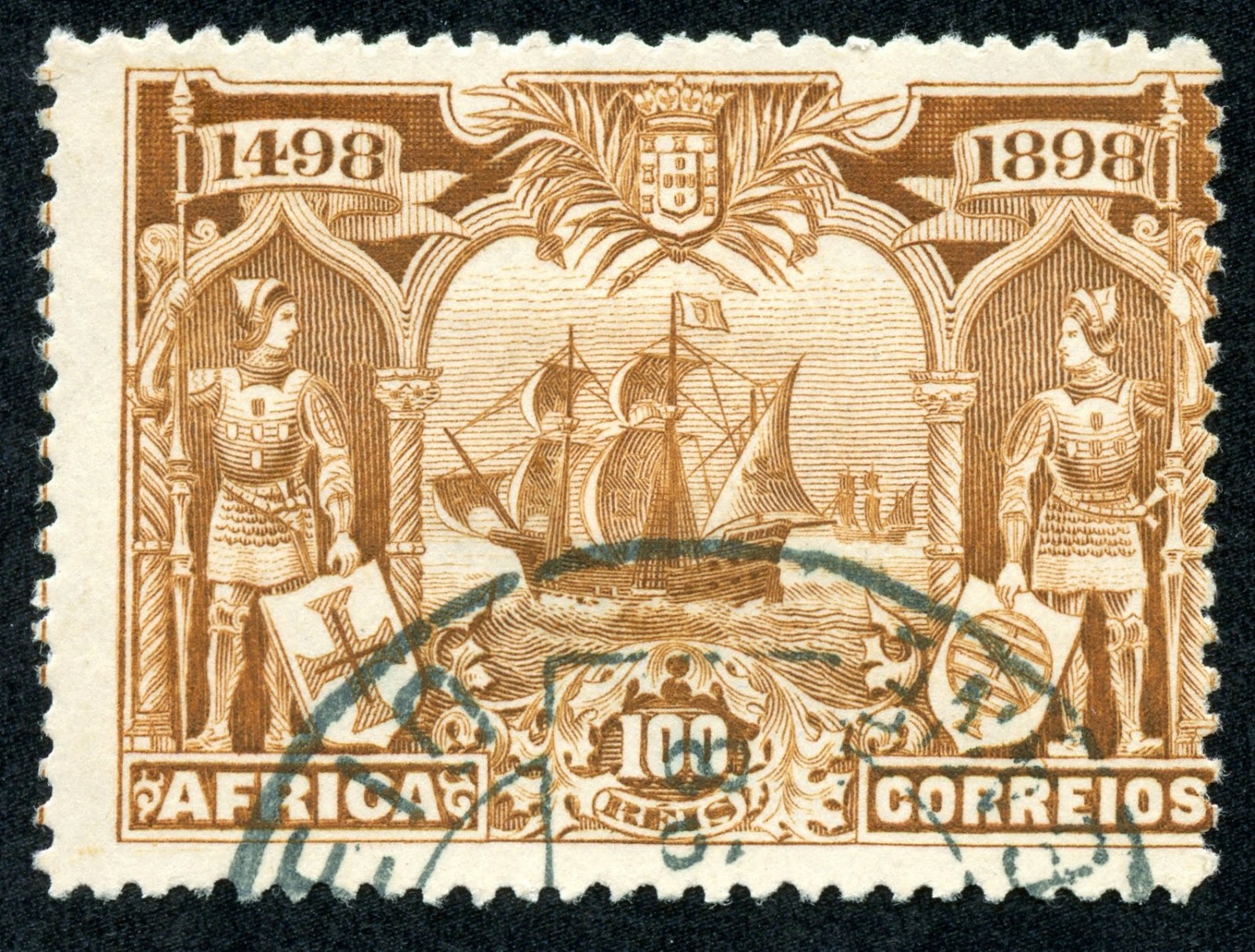 1898 Scott 7 100r bister brown "Flagship San Gabriel"
Out of the Blue
"Portuguese Africa", an administrative, not a physical entity, nevertheless has served as a launching point  for this blog post to overview the Portuguese colonies in Africa, as well as to feature the lovely 1898 Vasco da Gama set. Not bad. ;-)

Note: maps, Mouzinho de Albuquerque pic, appear to be in the public domain.