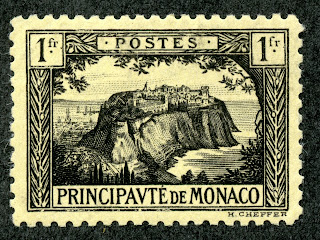 1922 Scott 45 1fr black/yellow "The Rock of Monaco"
Quick History
The Principality of Monaco, hugging the French Riviera coast at less than one square mile, is known for its gambling tables ( Le Grand Casino de Monte Carlo established 1858), as a tax haven ( no income tax - except by France if one is a French citizen), and generally as the richest location on earth (GDP $153,000 presently). 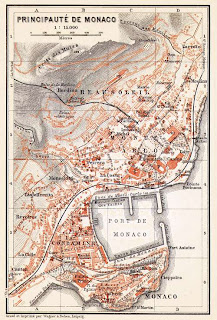 Principality of Monaco
Monaco was a Protectorate of the Kingdom of Sardinia from 1814-1861, which explains why Italian and Monégasque (related to Italian), are spoken, in addition to French. Monaco used the stamps of Sardinia from 1851-1860, when, by the Treaty of Turin, Sardinia relinquished the protectorate. 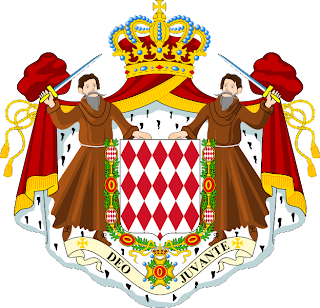 Coat of Arms
France recognized Monaco's sovereignty by the Franco-Monégasque Treaty of 1861. French stamps with Monaco or Monte-Carlo postmarks can be found until 1885, when Prince Charles III visage was used on the first stamps of Monaco. And with the success of the casino, the House of Grimaldi  stopped collecting income tax from its residents in 1869, insuring that Monaco would be the playground of the Rich and Famous.

The Princes were absolute rulers until 1910, when a constitutional monarchy was founded. Nevertheless, the Princes still have considerable power.

In 1919, Monaco affirmed its reliance on French military protection, and that  it would not have a separate foreign policy.

During WW II, first the Italians, and then the Germans occupied Monaco.

In 1949, Prince Rainier III ascended the throne, and was involved personally in Monaco's philatelic issues, raising the awareness of its stamps among collectors.

For those of us of a certain age, his royal marriage with actress Grace Kelly in 1956 is  a warm memory. ;-) 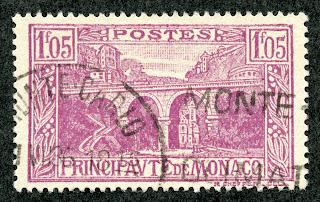 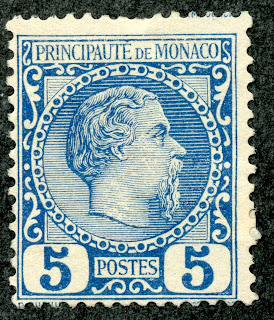 1885 Scott 3 5c blue "Prince Charles III"
Charles III had been Prince of Monaco and ruler since 1856, so it was most appropriate that the first stamp issue show his visage. The 10 stamp issue of 1885 was produced when Charles III was 67 years old.  In this portrait, he looks a bit younger, no? ;-) He would continue to rule until his death in 1889. The famous "Monte Carlo" district was named for him: he was the founder of the famous casino in 1858. 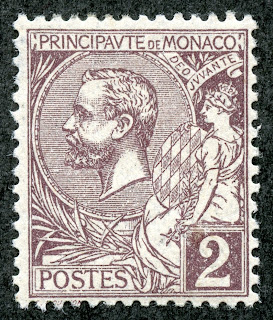 1891 Scott 12 2c dull violet "Prince Albert I"
Prince Albert II is currently on the throne, but the original Albert- Albert I- began his reign in 1889 after his father's death (Charles III). He was interested in oceanography, and also founded the "Institute for Human Paleontology". He became a member of the British Academy of Science in 1909. He died in 1922. 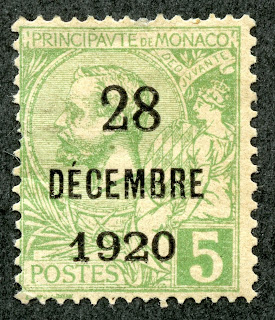 1921 Scott 30 5c light green
Stamps of 1901-21 overprinted or surcharged
With the birth of Princess Antoinette, who was the elder sister of Prince Rainier III, three stamps commemorated the occasion. CV is <$1-$5+ for two stamps. 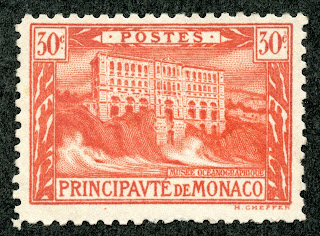 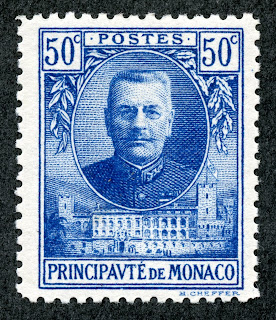 1923 Scott 55 50c ultramarine "Prince Louis II"
The son of Albert I, Louis II, became prince of Monaco in 1922, and reigned until 1949. His childhood was spent in Germany, as his mother disliked Monaco (and was unhappy with her husband Albert I), and so had left. Louis II first saw his father at age 11, when he was required to return. 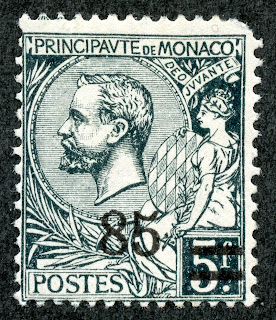 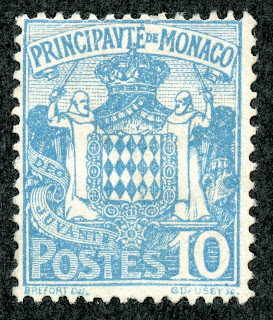 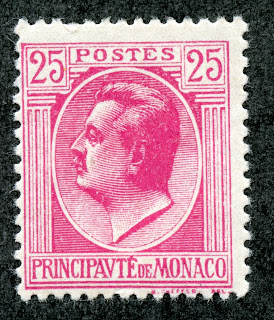 1924 Scott 69 25c rose "Prince Louis II"
Most of the middle values- some 19 stamps- have this Prince Louis II portrait. Although he never quite matched his father in reputation, the Monaco Football Club was formed in 1924, and the Grand Prix of Monaco was first held in 1929. 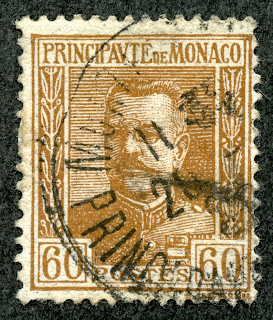 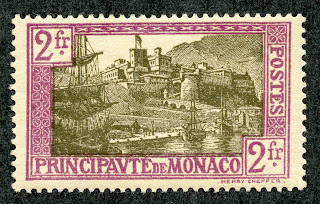 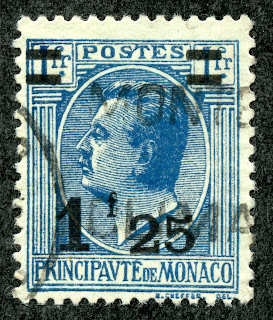 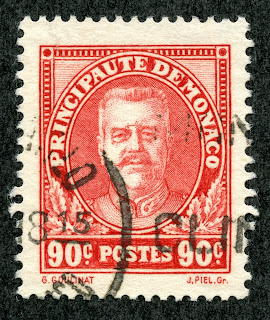 But what happened during WW II? Prince Louis was pro-(Vichy) French, but tried to remain neutral. However, most of the population in Monaco was of Italian decent, and supported the fascist Mussolini. The Italian army invaded in 1943, and set up a fascist government. With the collapse of fascist Italy, the German army then occupied Monaco. Prince Louis vacillated, pleasing no one. This caused a break with his grandson Rainier, heir to the throne, who unconditionally supported the Allies. 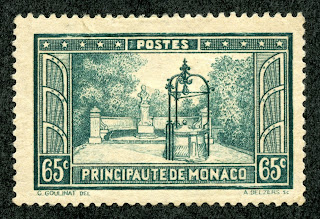 1932 Scott 117 65c blue green
"Gardens at Monaco"
The seventeen pictorials in the issue with six designs have classic scenes around Monaco. CV for the pictorials range from <$1-$140! ( For comparison, what is the most expensive commemorative during the 1930s for the U.S.?  The Imperf 1935 National Park flat plate printing Scott 765 10c gray black "Great Smokey Mountains" @ $3+! ) 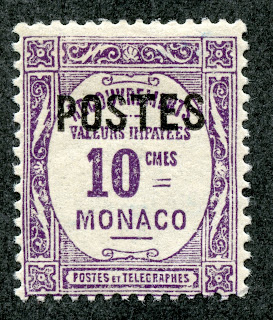 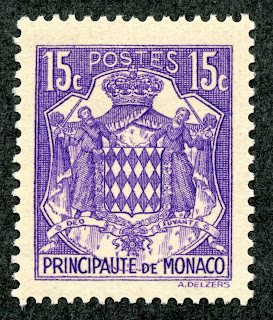 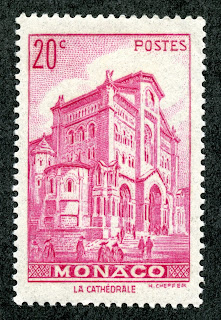 1939 Scott 160 20c rose lilac
"Cathedral of Monaco"
A lovely 35 stamp pictorial issue was produced between 1939-46. There are six scenes shown. Beneath the placid exterior of this set is the tumultuous WW II occupation of Monaco. 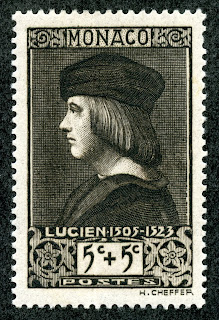 But shown is a stamp from a ten stamp issue of 1939- Lucien, Lord of Monaco 1505-1523, and House of Grimaldi, who murdered his brother Jean II to obtain the throne. Rough justice was served, however, as he was assassinated by his nephew in 1523. 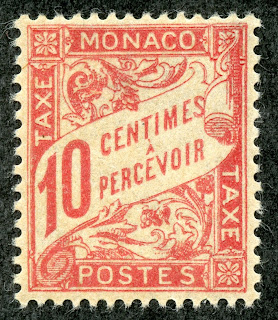 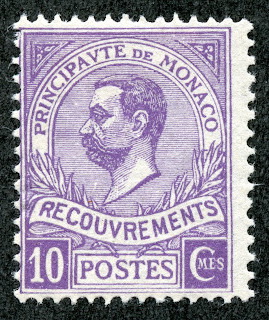 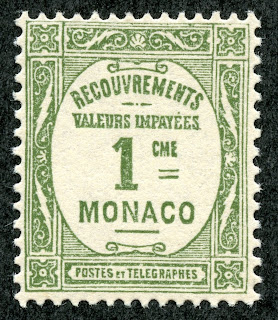 1925 Scott J21 1c gray green
Back to the French lookalikes with a 1925-32 six stamp set- these are actually "Recouvrements"
stamps, where charges due were recovered from the sender if the mail was refused or undeliverable.

1891-1921 Prince Albert I issue in Deep Blue
The Deep Blue album (Steiner) has 19 pages for Monaco. Of interest, because the last pictorial issue was produced between 1939-46, the classic Steiner pages cover this issue until 1946. Since the Steiner follows the modern Scott catalogue, there is a space for every major number. 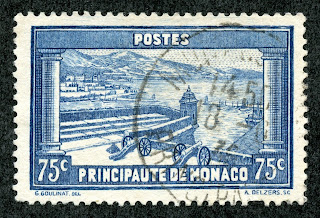 Observations...
• There are five stamps that break the "Most Expensive" $35 threshold, and fourteen more between $10+-$30+. Eleven of the stamps are semi-postals, which, generally, are moderately expensive for Monaco.
• Although, naturally, there are a few holes, BB does a good job of covering the less expensive Monaco.
• The 40s editions are on four pages, and have a different layout. Although I did not do a formal evaluation, it appears the '69 edition has a little better overall coverage. 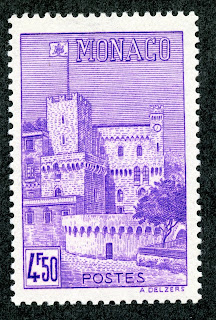 1943 Scott 172C 4.50fr bright violet
"Palace of Monaco"
Out of the Blue
What great stamps and issues! I love them! This is why I collect WW classical era stamps. ;-)

Note: Map and Monaco pic appear to be in the public domain. 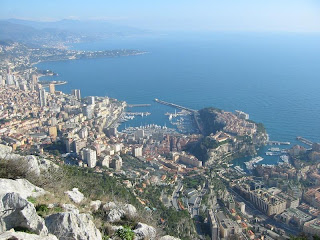