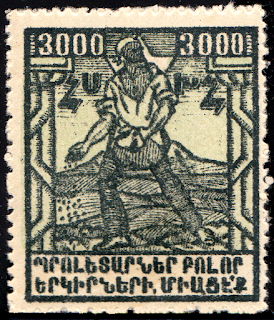 1922 Scott 306 3000r black & green
"Peasant Sowing"
Into the Deep Blue
Jim's Comment: A new talent has arrived. !! Alan (hy-brasil), a  longtime worldwide collector and a former employee of the philatelic auction business, has graciously agreed to submit occasional articles, which should be of interest to all WW collectors. Here is his take on the 1922 pictorial Issue of Armenia.. (Note: All of the scans by Alan showing a full stamp are genuine.)
Armenia once again tried to issue their own stamps, this time in larger formats in two colors each. These have been called the Erivan Pictorials. Like their predecessors, they went unissued as printed. It is remarkable that not only were there four unissued definitive sets for Armenia, but that each was forged at least once. Were there evil printers with too much time on their hands?

At least one of the forgery types (of which there are several) are sometimes called reprints since they match up with the original designs in size and form. But this can be accomplished by camera reproduction of the originals. These are indeed forgeries. The two lowest value forgeries are most often seen and seem to far outnumber the genuine stamps. Forgeries for the other values are less common but still are plentiful. Forged covers with forged stamps and forged cancels are also known.

We only show part of one forgery type here for comparison. Therefore, you should use the method used by hunters of wild mushrooms to keep from picking a similar-looking but poisonous species. And that is to match the characteristics of the genuine exactly. If it doesn’t, reject it as a forgery.

While genuine stamps can be found often enough, you will probably need to complete the set on your own. That is not a difficult task. Then the question that also comes to mind is: why don’t we see forgeries in complete sets?

There are also supposed color trials that are single color only. I don’t know what to make of these since they do have most of the original characteristics but are slightly different overall.

The 50r and 300r values have been covered earlier:

so we continue here with the rest of the set.

I suggest that, for the time being, to disregard gum appearance, paper and colors for forgery detection. Over time, gum and paper can age seriously so are not always reliable indicators. Both genuine and forgeries can come in color shades and can have clean-cut or rough perfs, though not necessarily for every value. 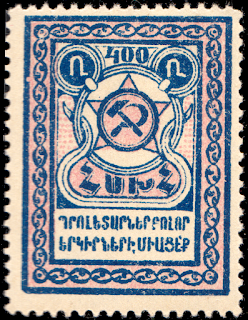 The 400 rubles shows a hammer and sickle and star.

Genuine / Forgery
Green arrows point to dots, and lack of shading
In the genuine stamp (left), the (pink) dotted decoration along either side fit the space they are given. In the forgeries, they do not. Registration (the proper alignment of the color plates) can be wildly variable in both genuine and forged so the dots may prove hard to use. But in the genuine, also note how the rings and leaves have heavy shading where they overlap. 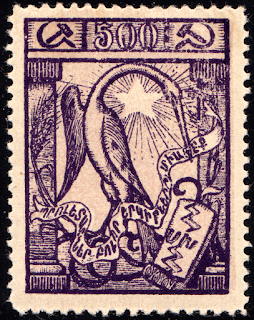 The 500 ruble value depicts a stork with a stone tablet at its foot.

The rays of the star on the genuine stamp (left) are broken/dotted. The shading lines in the upper corners are longer and finer than on the forgeries. 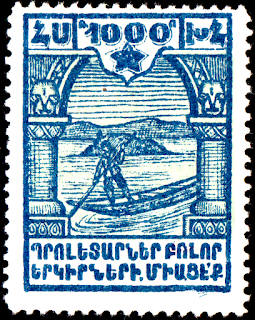 The 1000 ruble stamp shows a man poling a boat. There are intriguing catlike heads on the columns at either side.

Genuine / Forgery
Ripples in the water

The genuine stamp (left) has ripples in the water that are often dotted or broken, and the lines do look like little waves. The forgeries have solid lines, sometimes curving but hardly wavelike. HOWEVER, you can be fooled by a forgery on a type of paper with rough spots that cause the printed lines to break up. The genuine have finer lines and many more breaks in the ripples. 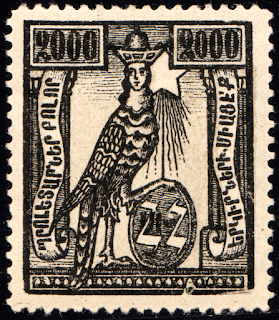 The 2000 ruble appears to show a harpy. Or it may be just some similar creature from Armenian mythology. How many definitive sets do you know that show mythical animals?

Note the flaws along the bottom border. These may or may not be constant. A lot of minor varieties like this can be found on most if not all values. Of course, they also exist on some forgeries, too.

Genuine / Forgery
On the genuine (left), the lines behind the head are broken and dotted, where the forgery essentially has continuous/solid lines. The genuine also has several ends of the rays from the star ending in fine dots and short lines. 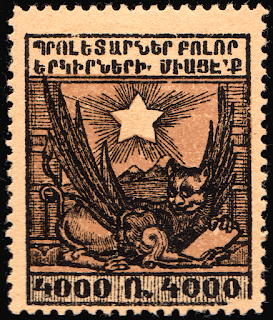 Yet another mythical creature. Again, what is it? It is not an aralez, which is doglike.

Note that the flaw at lower right is not damage but is missed inking. I’m guessing that it was not constant, but caused by a tiny scrap of paper that was present during printing and then fell off.

Genuine / Forgery
On the genuine (left), the beast is more thoroughly shaded, evident on the rear leg and rump. Perhaps the key is the very short ray from the bottom of the star, missing on the 2 very different type forgeries I’ve found. 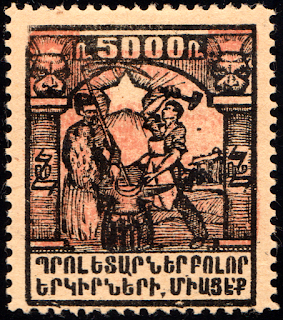 The stamp shows a farmer with a scythe, and a blacksmith. Note that the good Communist artist managed to work a hammer and sickle into the design here. 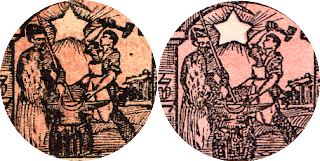 Once again, in the genuine (left), the star has some broken/dotted rays where the forgery has solid lines only. The lower part of the left figure’s robe is similarly shaded, with some dots/breaks in the genuine stamp. 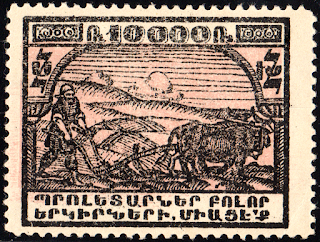 The design is of a farmer plowing with oxen. 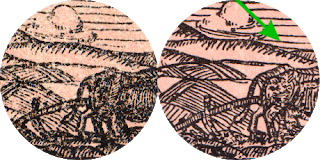 In the genuine (left), the bottom line of shading in the sky is a short line dotted at the end. In the forgeries, the line is solid and runs nearly to the right frame. The genuine also has many dotted/broken lines in the plowed fields, and the sky has many broken lines. The forgeries have continuous/solid lines.

We can see that the values in rubles are already quite high due to the inflation of the Russian ruble. By the time the pictorials were ready for release, inflation had surged tremendously and made most values obsolete. The pictorials were still issued (or perhaps even reprinted by their appearance), now surcharged with new values using both rubber or steel handstamps. These actually saw use. Scott only separates surcharges by color, but the two methods are clearly distinct with the rubberstamp types having a large first numeral.

Of course there are surcharge forgeries. Any surcharge on a forged basic stamp is going to be a forgery. Though uncertified, the below examples compare well with ones shown at https://stampsofarmenia.com/?page_id=1816 , Stefan Berger’s excellent online reference for early Armenia . The standard print references by Tchilingarian, et al are now hard to find. 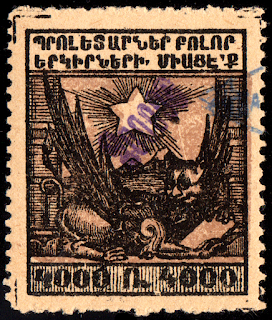 The 200,000r on 4000r with rubberstamp surcharge in purple. The partial blue diamond is a control overprint that does not appear on every surcharged stamp. 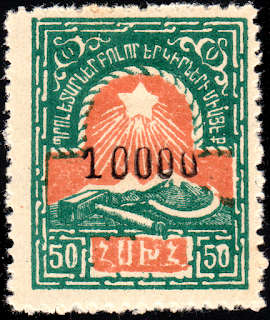 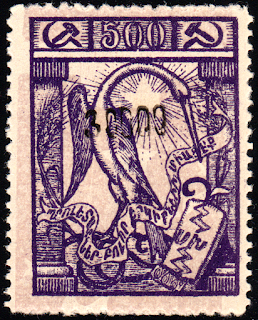 Surcharges (above) done with steel handstamps.

Note the interesting heavy shift in the second color on the 30,000r on 500r. The lilac color block at top is from the stamp design above. This may not be particularly uncommon, since for many countries needing to surcharge “leftovers”, the postal authorities used what was on hand without regard to centering and other niceties.

Harpy - Good (Genuine) & Bad (Forgery)
Out of the Blue

Jim's Comment: Wow, did I learn a lot! Thanks Alan for the clear demonstrations of Genuine / Forgery differences. Now, I need to go back and check my own stock. !!