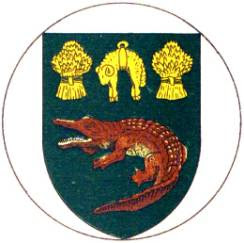 If no crocodiles live in Basutoland, why is one on their stamps? More about that in a moment.

Basutoland, Lesotho (say, Le-SOO-too) since its independence in 1966, got their own stamps in 1933 with the British crowned heads at the top and a local scenic view on the bottom, a pattern followed in other African colonies as well. Basutoland’s scene incorporates mountains and the croc.

The country is indeed mountainous with steep cliffs rising to high tablelands, rather like an upside down cereal bowl. Mountains made the country defensible militarily; when under attack, the Basotho scaled the cliffs and dumped rocks on their adversaries. Highly effective. They were never completely conquered, although they lost much of the land surrounding the mountains during the 19th and early 20th centuries. Lesotho is the only country in the world, save Vatican City and San Marino, that is completely surrounded by a single foreign country.

So the mountains make historical sense, but what about the croc? Basutoland is singularly inhospitable for crocs -- cold rocky streams fed by melting snow, no shallows with sandy banks. The 19th century unifying king of the Basotho people, Moshoeshoe (say, moe-SCHWAY-schway), was the son of a sub-chief of the Koena (crocodile) people who came from the North where crocs abound. The stamps’ croc, then, is totemic -- not scenic but a British way of acknowledging Basotho royalty.

I’ve twice been to Lesotho, even met the current King -- very regal, very impressive -- but not so impressive as a woman I met in the highlands. Her son was a member of a local youth group in which other youths were orphaned by the AIDS pandemic. At one meeting a fight broke out and her son was killed. She not only forgave her son’s killer, much in the spirit of post-apartheid forgiveness in Southern Africa, but she took him into her home where he lives as a beloved adopted son.

Having completed my BB, I may make modern Lesotho a collecting specialty. 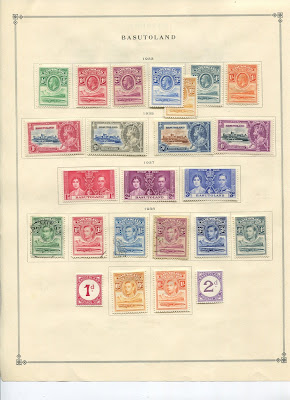