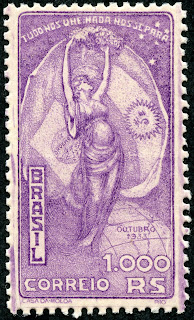 1933 Scott 383 1000r light violet
"Republic Figure, Flags of Brazil and Argentina"
Into the Deep Blue
You know the problem with opening up a box of chocolates? It is difficult to just take a few.

Well, looking at Brazil commemoratives, I have the same dilemma. So here is the next box, err installment... 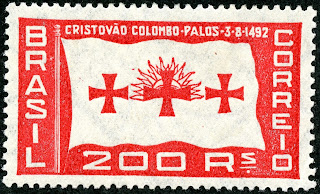 1933 Scott 379 200r deep red
"Flag of the Race"
The "Flag of the Race" is a curious symbol. and has been adopted especially by the Hispanic Americas during the 1930s.. The white background is for peace and purity. The sun is for the awakening of new lands. The three crosses symbolize Christopher Columbus's three ships.

This stamp also commemorates the 441st anniversary (why?) of the sailing of Columbus from Palos, Spain on August 3, 1492. 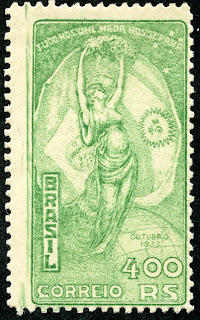 1933 Scott 381 400r green, thick laid paper
"Republic Figure, Flags of Brazil and Argentina"
For the visit of President Justo of the Argentina to Brazil, October 2-7, 1933, a four stamp one design engraved issue was released. 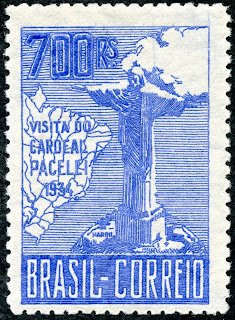 1934 Scott 393 700r ultramarine
"Christ of Corcovado"
On October 20, 1034, a two stamp typographic set was released. This was to note the visit of Eugenio Cardinal Pacelli, later Pope Pius XII.

Scott states there were three printings, distinguished by the color shades - but no further information. :-( 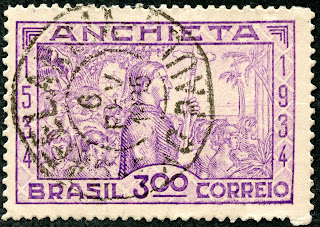 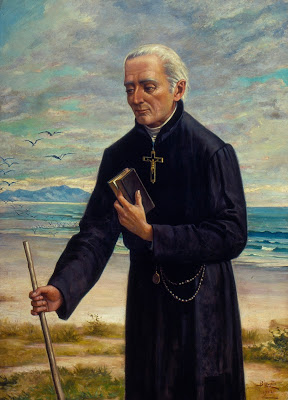 A native of the Canary islands, he was the first person to provide an orthography for the Tupi language spoken by the indigenous people. 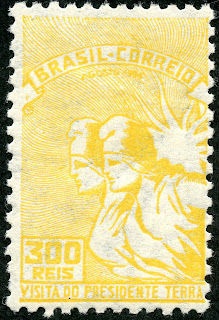 Note the allegorical representation of the two nations. 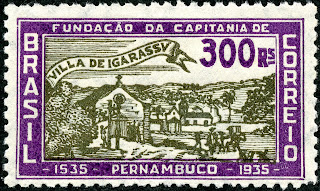 1935 Scott 403 300r olive & violet brown
"View of Town of Igarassu"
Commemorating the 400th anniversary of the Captaincy of Pernambuco founding, a two stamp set was released On July 1, 1935. A Captaincy was originally a tract of land grant 50 leagues wide from the Atlantic ocean to the Torsedillas meridian. During the colonial Brazil era, the Captaincy of Pernambuco absorbed other Captaincies, due to the successful growing of sugar cane. 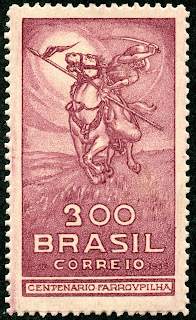 1935 Scott 408 300r rose lake
"Revolutionist"
For the centenary of the "Ragged" Revolution (Ragamuffin War), a four stamp three design issue was released from September 1835 to January, 1936.

Note the power and movement the stamp design evokes. Remarkable. 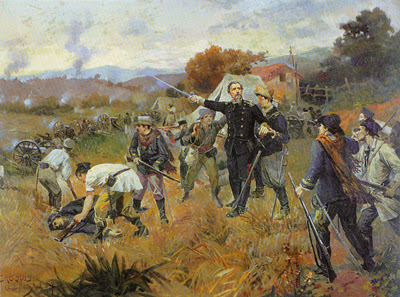 Battle of Fanta, battle scene in Southern Brazil
Painting by Oscar Pereira da Silva
It began as an uprising in southern Brazil in 1835, this representing the longest and bloodiest of the failed wars of secession in the Brazilian Empire. Of interest, the Italian patriot Giuseppe Garibaldi was involved in the fighting. 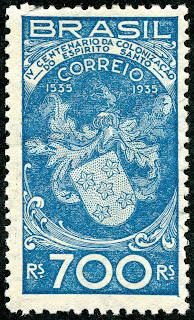 1935 Scott 413 700r turquoise blue
"Arms of Fernandes Coutinho"
For the 400th anniversary of the establishment of the first Portuguese colony (Espirito Santo) by Vasco Fernandes Coutinho, a two stamp two design issue depicting his ship and Coat of Arms respectively, was released on October 25, 1935. 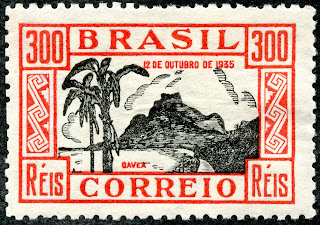 It is always celebrated on October 12, and honors Brazil's patron saint, the Virgin Mary Aparecida. 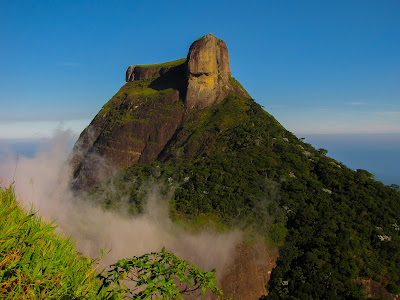 The mountain of Pedra da Gavea
Pedra da Gavea mountain is 2,769 feet high (844 m), and plunges directly into the ocean. It is covered with lemon, orange, breadfruit, banana, and papaya trees, and cannas and roses. 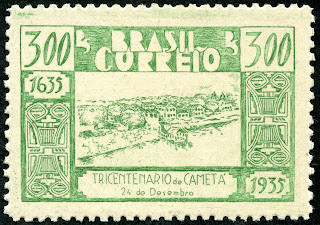 1936 Scott 420 300r green
"View of Cameta"
For the 300th year founding of the city of Cameta, a two stamp typographic set was released. (This actually looks lithographic to me.)

The 1875 "Pilot Guide" book states that the area around Cameta on the Tocantins river has about 30,000 people, of which 5,000 are slaves. The rest are primarily "native Indians". 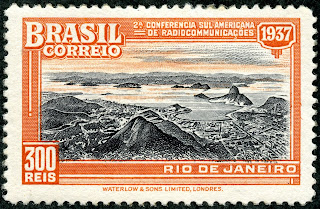 1937 Scott 443 300r orange red & black
"Bay of Rio de Janeiro"
For the 2nd South American Radio Communication Conference held in Rio, a two stamp  set was produced June 9, 1937. Note this stamp (and the next two below) were printed by Waterlow & Sons, London. 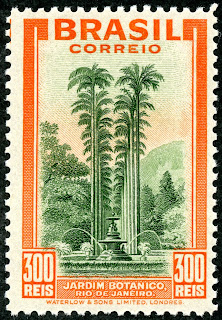 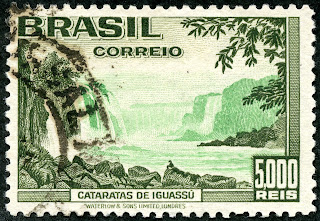 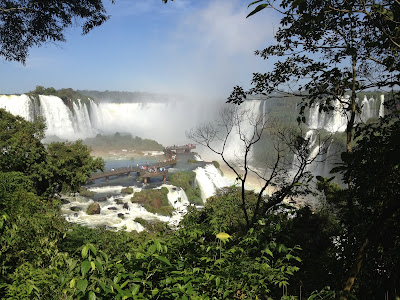 Iguazu Falls from the Brazilian side
Located on the border between Argentina and Brazil, the cataracts, 197-269 feet high (60-82 m), comprise the largest waterfall system in the world. My daughter has visited the Falls. 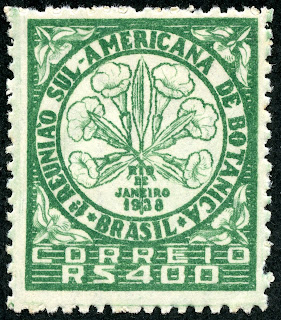 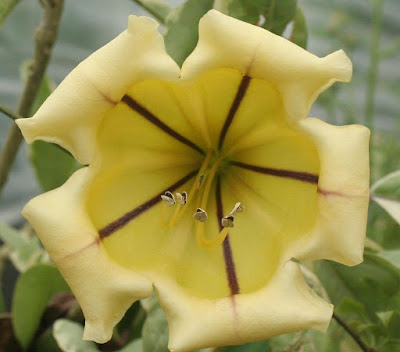 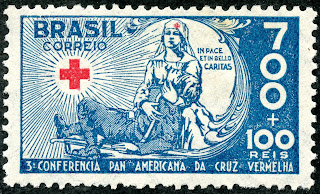 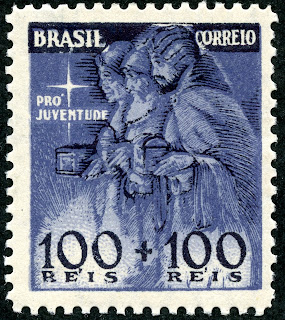 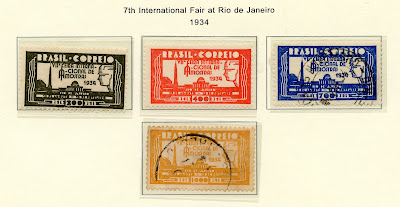 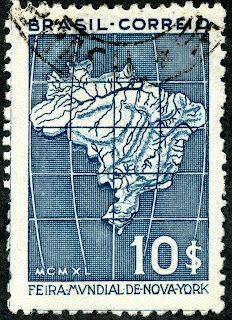 1940 Scott 498 10,000r slate blue
"Relief map of Brazil"
Out of the Blue
There is a cultural quality (magical realism?) in the Brazilian stamp design that is not found with North American stamps.

Note: The paintings, Iguazu Falls, Gavea mountain, and Flower pic scans appear to be in the public domain.