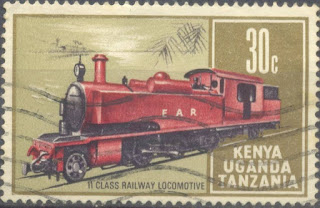 Since its inception in 1892, the Uganda Railway has been called by many names, both formal and colloquial -- The Kenya-Ugandan Line, East African Railways and Harbours Corporation (EAR&H), the Lunatic Express or Lunatic Line, the Iron Snake, and a Gigantic Folly, among others. Churchill regarded it a “brilliant conception” and fine example of “the British art of 'muddling through.'” Built at tremendous costs in lives (over 2000 workers died -- tropical disease, lions, local resistance), the line stretched from Mombasa to Kampala by 1903.

The philatelic significance is great because, once service began, almost all Kenya and Uganda non-local mail was transported along the Lunatic Line. At least two canceled stamps on these pages very likely made the journey -- Kijabe, Kenya and Jinja, Uganda. Both are located on the line, Kijable being a small settlement on the Great Rift’s edge. Eventually a railway/roadway bridge would be built across the Nile at Jinja, a feat commemorated in Kenya-Uganda-Tanzania stamps of the 1930s. Railway cancels can be found, but cost dearly.

I encountered a wood-fired mail train when I was changing a flat tire on the road to Mombasa in 1975. Its hissing scattered a troop of baboons that gathered to ridicule my circumstances.

Jim's Observations
I don't have any stories as exciting as Bud's tale of changing a tire accompanied by baboons on the road to Mombasa. Who says stamp collectors live sedate lives? ;-)

Big Blue '97, on one page, has 19 stamp spaces for the 1903-1919 British colonial stamp issues of King Edward VII and George V.
The protectorate's issues are the well known Edward VII and George V designs from 1903-1918. The Edward VII issues (1903-07) are a bit tricky, with watermark 2 or 3, and chalky or ordinary paper varieties to detect. Check the watermarks for this issue. 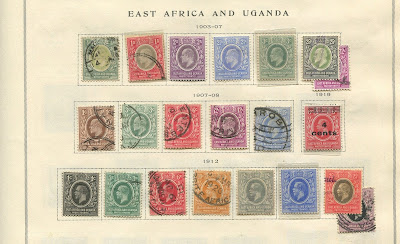