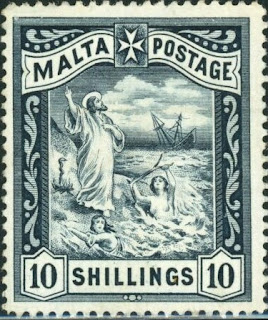 Malta, rich in history and iconography, might be expected to have interesting stamps, and it does. The archipelago’s strategic mid-Mediterranean location has spawned storied layers of artifacts and lore stretching well back into the stone age.

Saint Paul’s shipwreck is a case in point. According to the Bible’s Book of Acts, the Apostle Paul was being taken as a prisoner to Rome, since he was a Roman citizen, to be tried for sedition and heresy.

Acts records a fierce storm that blew the ship off course, finally grounding it on a reef in Malta. None of the 276 passengers perished. Safe on shore, Saint Paul gathered some wood for the fire that local people had built. The brush produced a snake that bit him. The locals expected him to die but he shook it off without ill effect. As the result, he was welcomed. Then he healed sick people and, according to tradition, converted some of the islanders to Christianity. (Never mind that today Malta has neither snakes nor trees, but it does have many Christians).

The event is memorialized by the stamp pictured above, which was inspired by a Gustave Doré’s wood-engraving, although there are several differences. 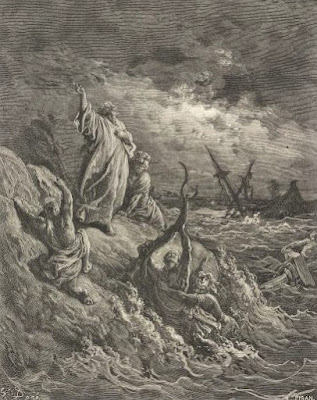 For example, the stamp includes the fire and snake, Doré omits them. Saint Paul has a dark beard and a halo on the stamp, but white hair and no halo in the engraving. The passengers climbing on shore are men in the engraving, but they are women on the stamp. Waves seem not so angry on the stamp and there are no threatening clouds.

Saint Paul’s shipwreck, reckoned to be Malta’s most important historic event, is memorialized on eight classical era Maltese stamps, four of which use the same drawing. One of them, the ultra-scarce Scott # 65, has the highest catalog value ($3,500) of all Maltese stamps. Its border design differs from #18 and, sadly, I don’t have one. But there is a much cheaper #93 with the “self-government” overprint in the supplement pages. 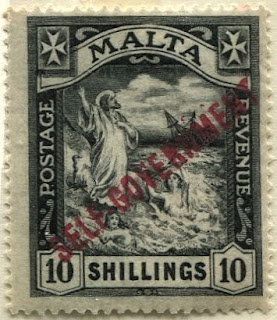 Melita, the symbolic personification of Malta and the Maltese people appears on more stamps than Saint Paul does. Debuting in the same series as the Saint (1899), she has the lesser values of the 1922-26 definitive series all to herself and shares with her protective big sister, Britannia, the higher values. Stereotypical female depictions of countries, usually with Latin-derived names, were especially popular in the 19th and early 20th Centuries -- compare Germania, Hibernia, Columbia, Zealandia, and Helvetia. 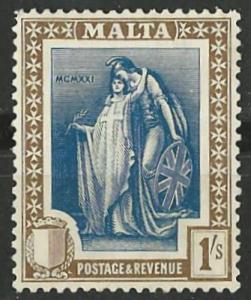 For the lesser values, Melita wears the eight-pointed Maltese cross, another national symbol frequently appearing on Malta’s stamps. This cross, not as ancient as some suppose, can be traced to early modern times, the 1500s. She holds a rudder for guiding the ship of state. Debate has arisen about whether or not Edward Caruana Dingli’s depiction of Melita (below) is art or kitsch. 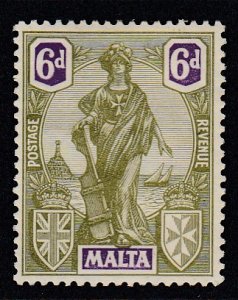 The Maltese eight-point cross (a variety of croix fourchée, meaning “forked” in the parlance of heraldry) has been adopted by many modern paramilitary and civic groups.

Jim's Observations
When Napoleon Bonaparte ejected the Order or Knights of Malta, which had ruled for 270 years, in 1798, the ouster was initially welcomed. (The Sovereign International Order of the Malta, now based in Rome, continues to do charitable works, and issue their own stamps.) But the Maltese soured on the French occupation, and the archipelago in the Mediterranean Sea eventually became a British colony in 1814.
Malta's strategic location between the Strait of Gibraltar and the the Suez Canal (1869) was advantageous indeed. And it was on the trade route to India.

Malta is perhaps one of the more interesting British colonies with a number of pictorials and overprinted stamps. There are expensive stamps, but still enough less expensive ones to interest the general classical collector. 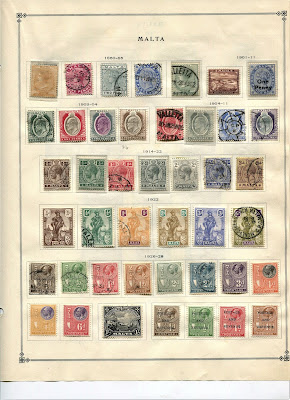 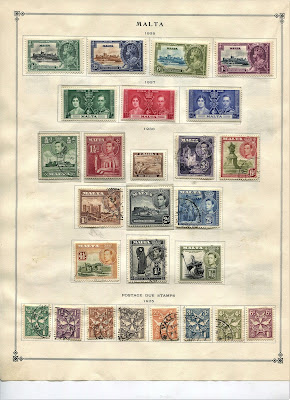 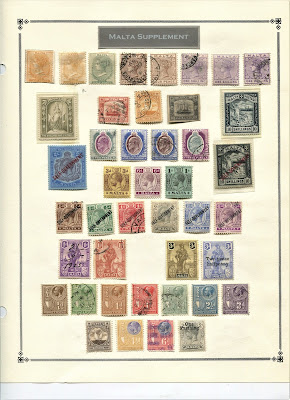 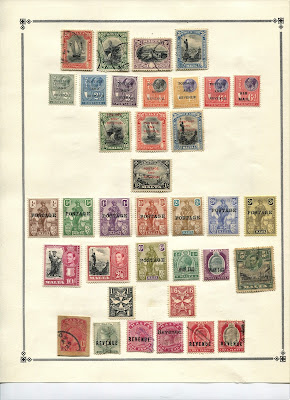 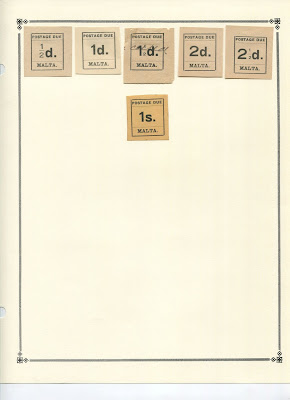