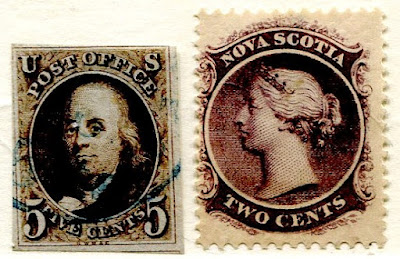 US #1 red brown, Nova Scotia #9 lilac
Bud's Big Blue
Bud's Observations
Nova Scotia (NS) stamps might well have looked more like the image on the left (above) than the one on the right. Not only did Nova Scotia almost join the American Revolutionary War, but Franklin owned some 2000 acres there and organized their first official post office. Moreover, many New Englanders had moved to NS and were sympathetic to the revolutionary cause.

It was not to be, however. Details can be found at: https://www.smithsonianmag.com/history/when-nova-scotia-almost-joined-american-revolution-180963564/

It’s worth noting that forgeries exist for all NS stamps. To me, the forgeries of the decimalized Victoria portraits appear to have a pouting lower lip or are bug eyed and, therefore, reasonably easy to detect.

Census: five in BB spaces, three tip-ins, three on the supplement page including a cover.

Jim's Observations
The gorgeous ( to my eyes) Queen Victoria 1860-63 six stamp issue can be found in either white or yellowish paper. Sometimes one is the minor number in Scott, sometimes another. Interestingly, unused and used values are approximately the same (except for the 5c blue $400/$10+ valuation). Apparently, after Nova Scotia joined the Confederation, most of the unused Nova Scotia stamps became available on the philatelic market. This probably explains the relatively inexpensive CV for unused.BTW, if one has a modicum of interest in the stamps of Canada, and former provinces and colonies, pick up the Unitrade specialized Canadian catalogue.
Nova Scotia Blog Post & BB Checklist
Page 1 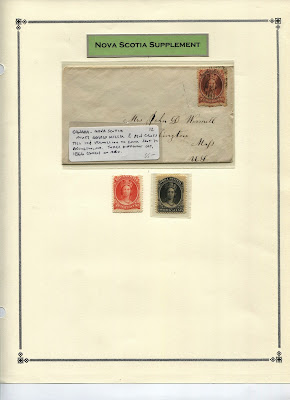