Montserrat #s 75-77 -- green, red, and orange brown
Bud's Big Blue
Bud's Observations
Rarely do stamp designs feature ghost towns. Even more rarely does a thriving city illustrated on a stamp, in subsequent years, slip into ghostdom.
Plymouth, Montserrat, provides the exception. Spry and bustling when in the 1932 series came out (see above), it was buried alive in 1995 and 1997 by a series of pyroclastic lava flows from a volcano that had lain dormant for 300 years. You can see the sleeping volcano, Chances Peak, on the stamps hovering over Plymouth. 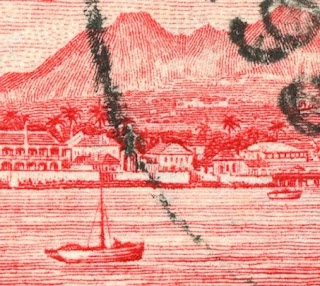 #76,red, close-up 2nd example
Note War Memorial Clock Tower
Magnification shows some of Plymouth’s landmarks. In the center is the War Memorial clock tower flanked by government buildings (partially obscured by cancel in the 1st example). Plymouth was Monserrat’s capital and sole port of entry. It still is the government’s official location, although no one lives or works there -- the world’s only phantom capital. Fire and ash rendered Plymouth uninhabitable. Thankfully, all residents evacuated safely then resettled in the northern part of the island or elsewhere in the United Kingdom. 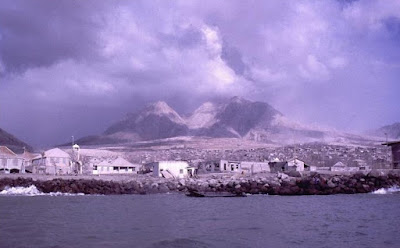 Plymouth and Chances Peak during an eruption, from perspective similar to the 1932 series
Copyright © 2020 BBC 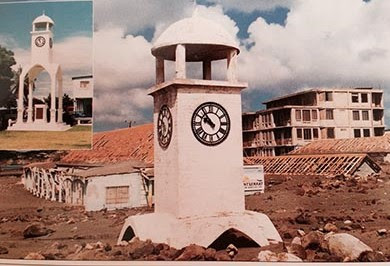 Plymouth’s War Memorial clock tower before and after devastation, a postcard
Phantom philately -- collecting stamps cancelled in ghost towns -- has a specialized following. They look for cancels from the likes of Sixteen, Montana and Thistle, Utah, or from towns with ghostly names such as Gnaw Bone, Indiana and Dead Woman Crossing, Oklahoma. In my locale, a large “haunting” of philatelists collect cancels from dead post offices (“haunting” is the collective noun for ghosts). Plymouth cancels struck during the eruptions should command high prices, if there are such, for the post office is now certainly dead.

Monserrat’s stamps remind me of another spooky matter -- a pernicious myth circulating on the internet about atrocities supposedly perpetrated against Monserrat’s early Irish immigrants. Yes, many of them were indentured servants. But allegations that equate their circumstances to horrors endured by African slaves are false, deceitful, and lacking in evidence, according to knowledgeable historians. Montserrat’s 1903 series (#s 12 thru 20) appropriately honors the island’s Irish heritage -- Erin, the female personification of Ireland holding a harp, clinging to a cross, and looking rather prosperous. The image was soon adopted as Monserrat’s coat of arms (1909). 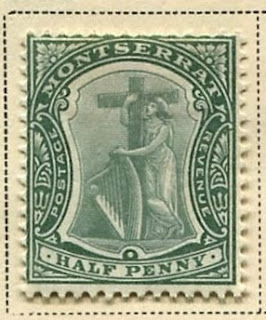 I find the false aggrandizement of white indentured servants’ suffering disturbing, in a chilling sort of way, because some of my own ancestors were indentured servants. One of them married his master’s daughter -- a practice forbidden to African slaves. Although some indentured whites were ill-treated, reparations were commonly available once their servitude was completed. Not so for chattel slaves. For them, suffering was perpetual and hereditary.

Note: the BBC pic (above) is copyright, and is used here for educational purposes.

Jim's Observations
Montserrat (10 miles by 7 miles) was named by Christopher Columbus in November, 1893, after the Monastery of Montserrat in (now) Spain.
The English, though, had control of the island by 1632, and Montserrat became known as "The Emerald Isle of the Caribbean": partially for its lush greenery, but more because the Irish were transported there as slaves, servants, and prisoners.
Montserrat Blog Post & BB Checklist
Page 1 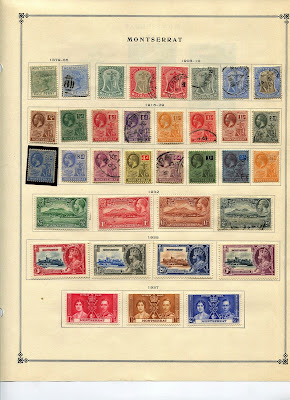 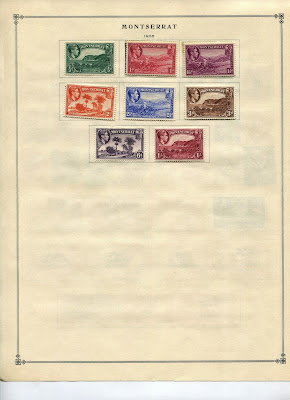 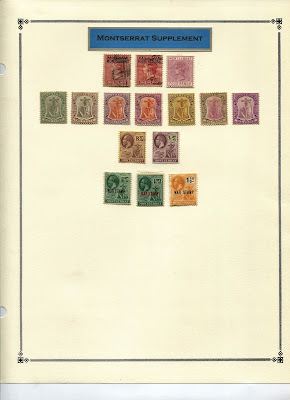