A selection of Medical Springs stamps
Bud's Big Blue
Bud's Observations
Jim suggested that world-wide collectors should acquire a few of Nevis’ famous Medicinal Springs stamps because of their unique design, even though they tend to be rather expensive (see Jim’s post here). So, to use a phrase common in my great grandmother’s time, I decided to “take the waters.” Not literally, of course, for I have no desire to swig hot mineral water or loll about in it regardless of any alleged curative benefits.

The stamps’ design tells a powerful story, though. A fainting, perhaps dying woman is supported by another while a third pours a therapeutic quaff. I hope it restored her vigor. Certainly, the stamps vigorously promote the spas. Scott lists 18 major numbers with this design.

The spas of Nevis were a 19th century luxury attraction. And they still exist. 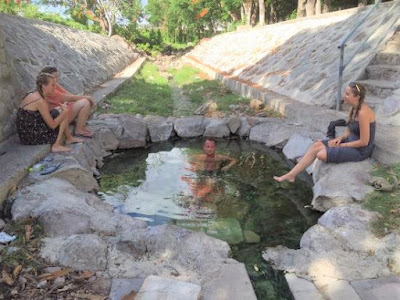 As a start, I bought five of Medicinal Springs stamps (shown below), all reasonably priced -- two of the one cent and three of the four cent variety. Sometime after making the purchases, however, I learned that the Nevis spring waters had been muddied by forgers. Even the 14 stamps of Nevis’ Queen Victoria design have been extensively forged. My Medicinal Springs examples might test positive for the forgery virus, as do many of those offered by on-line auctions.

For genuine vs forgery comparisons, see:  http://stampforgeries.com/forged-stamps-of-nevis/. The forgeries, however, make an interesting collection in their own right, including those forged as recently as Nevis’ 1984 automobile series. Serious forgery collectors will want to consult a 1910 book by Fred J. Melville -- The Postage Stamps of Nevis & How to Detect the Forged Stamps of Nevis. A digital reprint recently became available.

Used Nevis stamps often bear the “A09”, the British designation for Charlestown, the capital of Nevis. The “A09” was used on British stamps before the colony had stamps of their own inscribed “Nevis.” In the 1880s, Nevis created an overprinted bisect -- the one cent purple Queen Victoria was split in half to create two ½ cent stamps. Scott catalog provides major numbers for these two, one for the black overprint and one for the violet. An example of the black overprint is showing on the supplement page.

The Medicinal Spring design achieved restored vigor of a sort when, in 1903, Nevis began issuing stamps conjointly with St Kitts, a nearby Caribbean island. The redrawn vignettes show the scene more clearly than do the originals.

I suspect that many collectors are glad that only four spaces, out of a possible 32, need to be filled to complete the Big Blue Nevis page. To make it even easier, three of the four can be filled with any Nevis stamp.

Jim's Observations
Nevis (named originally by the Spanish as "Nuestra Senora de las Nieves" -Our Lady of the Snows), was actually settled by British settlers, who migrated from Saint Christopher, in 1628. The sugar cane grown on the island, with the help of imported African slaves, was highly profitable, even outproducing Jamaica in the 17th century. But an invasion by the French d'Iberville in 1704 decimated the sugar industry, and Nevis never really recovered.
In 1883, St. Christopher, Nevis, and Anguilla were linked under one "Presidency", with the headquarters on St. Christopher (St. Kitts). Naturally. Nevis was not pleased, as they had their own "Presidency" prior to this new administrative arrangement.
In 1778, the Bath Hotel was built to take advantage of the hot springs in the area. This, interestingly, was the first attempt at "tourism" in the Caribbean. The "Medicinal Spring" theme was also featured on the first issues of Nevis 1861-1876, some 19 stamps.
Nevis Blog Post & BB Checklist
Page 1 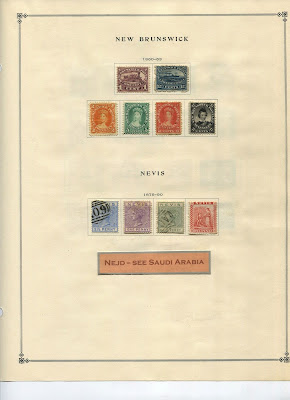 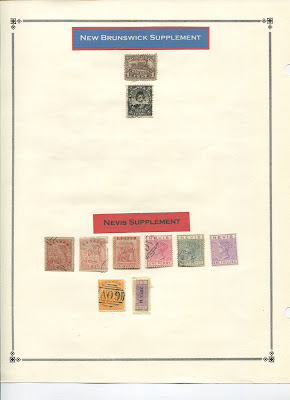