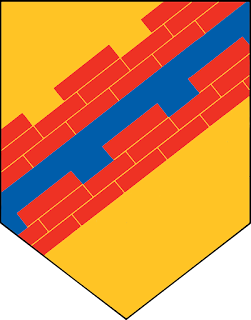 North Ingria Republic coat of arms
Bud's Big Blue
Bud's Observations
The largest country in the world, Russia, has a long history of troubling its neighbors. As I begin writing this post, Russia’s bombs are falling on Ukraine, although their ill-prepared ground troops appear to be floundering. Optimism about negotiations is fading.

I’m struck by the similarities between Russian atrocities in Ukraine and those that Bolsheviks heaped on Ingria a century ago. 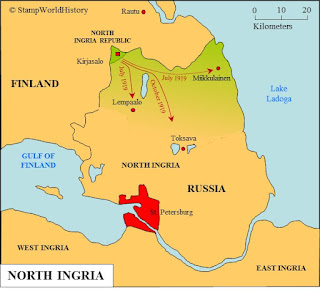 The Ingrian Finns did not want to be Russian but, in 1919, they found themselves under Bolshevik control. A few Lutheran farmers in a northern tip of Ingria, about 60 kilometers from St. Petersburg (see map), managed to secede and form a republic. It lasted less than two years. They hoped to join Finland, but it never happened. The Treaty of Tartu between Finland and Russia (1920) ended that dream and, in the following decades, a genocidal nightmare ensued. There were approximately 130,000 Ingrian Finns in 1919; today they number fewer than 21,000 (2).

The short-lived republic did, however, leave a philatelic record. Big Blue provides spaces for nine of their 14 stamps under the heading “North Ingermanland”, a Swedish designation for the territory. They also created other legitimizing marks for their breakaway state -- coat of arms (above), flag, anthem, army, navy, military uniform, military awards, legal court, and newspaper (3). Kirjasalo, in 1919 a village of fewer than 500 residents, now abandoned, served as the capital. 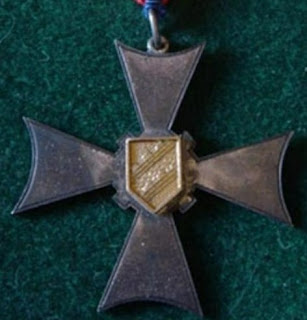 North Ingria military medal
The coat of arms and the military award bear the same design as the first North Ingria Republic stamps, which have a striking similarity to the first stamps of the Finnish Republic.

Interestingly, the 5 Markka stamp shows a church with a toppling steeple. I cannot find a record of the specific church tragedy, but surviving descendants of the Inger Finns recall churches being destroyed by the Soviets and priests being imprisoned and executed (4). 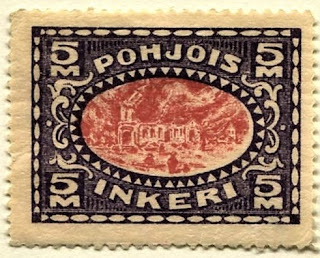 Legitimate postmarks are scarce and many of those found in today’s market were struck as CTOs after the North Ingria Republic ceased to exist. The one in my collection appears to be on a genuine stamp, but I’m unsure whether it’s a CTO or not. The Kirjasalo cancel is dated 17 September, 1920, about a month before the Treaty of Tartu was signed. 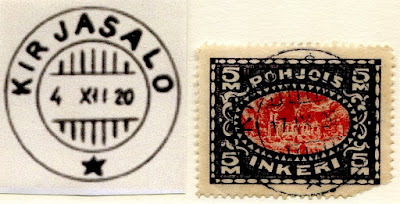 Forgeries, of course, abound. Jim offers some clues for detection (here), the easiest of which is the genuine cream-colored paper as opposed to white. Forgers, despite their chicanery, have helped keep the memory of the North Ingria Republic alive.

As I wrote this post, a plan for a small tribute to North Ingrian survivors occurred to me. I decided to buy a few stamps from a dealer in Kyiv, even as the bombs were dropping. I found the dealer thanks to an online auction and sent the payment after I received her invoice. Ukraine Post provides excellent tracking service and apparently my stamps safely are on their way. One of those I bought shows the Russian warship Aurora being attacked, so it seems, by a Ukrainian Trident. It’s a Russian stamp overprinted in Kyiv when Ukraine broke away from Russia (1992). The Aurora, now a naval museum, is permanently docked at St. Petersburg in what was formerly North Ingria. 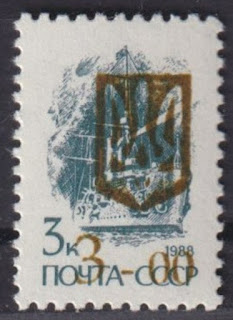 1) Map salvaged from Gerben Van Gelder’s now sadly defunct "stamp world history" web site
2)   https://en.wikipedia.org/wiki/Genocide_of_the_Ingrian_Finns
3)   https://vk.com/wall-73029133_7056?lang=en
4) https://www.kansallismuseo.fi/uploads/Ingrians-booklet-ENGLISH-20-02-05.pdf
Jim's Observations
Thanks Bud for your thoughtful idea of purchasing stamps from a dealer in Kyiv.
Regarding the uprising, the reality was the only area the Regiment controlled in Russia was Kirjasalo, and the "Kirjasalo Post Office" was actually located in an office room of the railroad station at Rautu, just across the Finnish border!
For more on forgeries, see my blog post link below.
North Ingermanland Blog Post & BB Checklist
Page 1 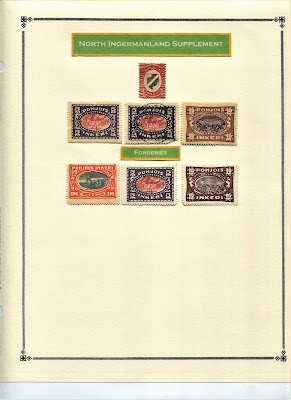 Comments appreciated
Posted by Jim at 7:00 AM