A Fournier Surprise- Brazil 1889 Postage Due 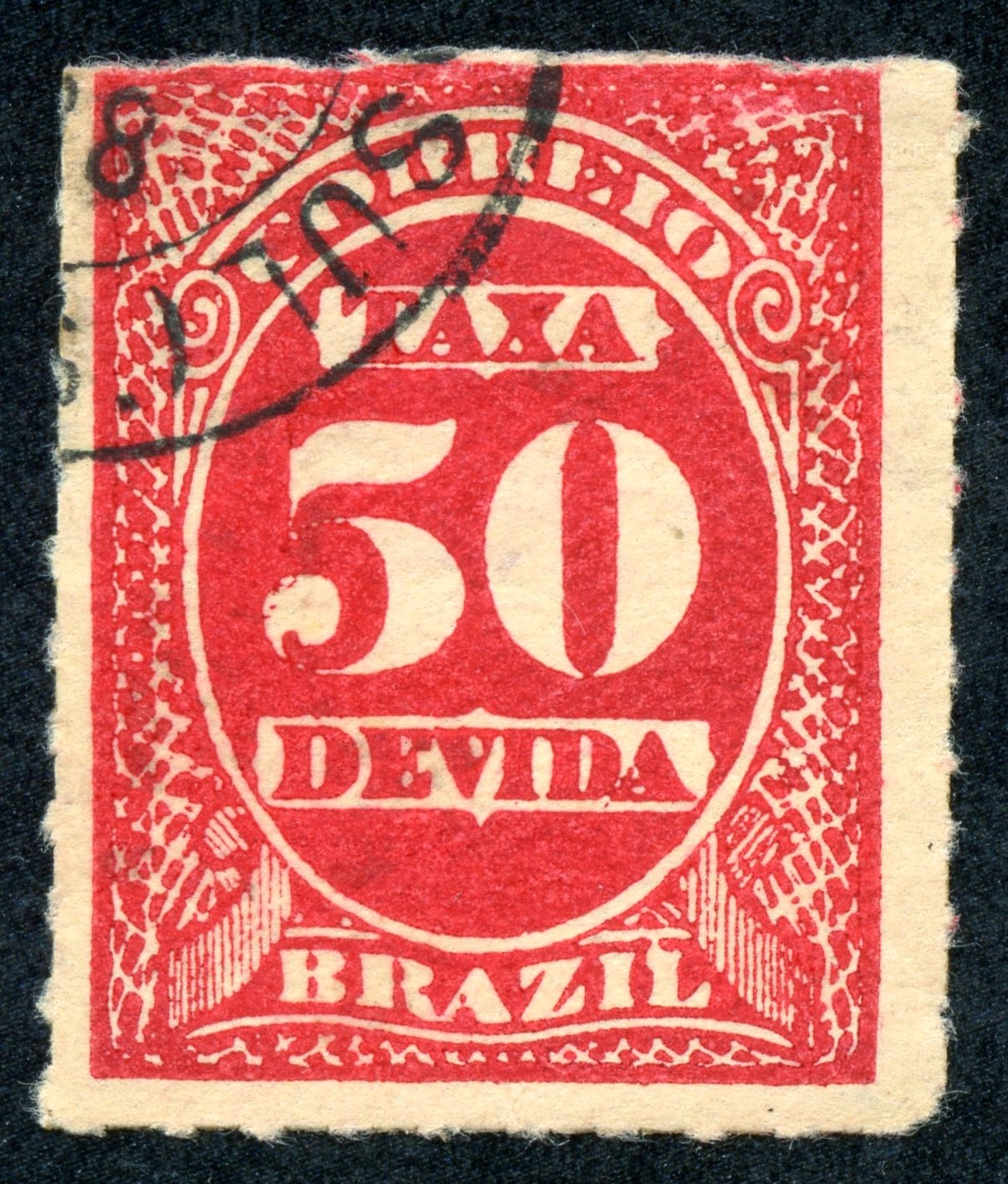 Brazil 1889 Scott J3 50r carmine
Francois Fournier Forgery
Into the Deep Blue
It began innocently enough. A prominent dealer (who will remain anonymous) had the 1889 Postage Due set available. I needed most of the stamps, and they were on my want list, as they had spaces in Big Blue.

Moreover, he was offering a discount on Brazil for the month.

I've had business with the dealer before, and have been happy with the results. He has the less common material in stock - which is most welcome after one has exhausted the usual sources.

Several of the stamps, though, had a darker color tint, and seemed a tad "rough" in appearance.

Reading the fine print in the Scott yielded the helpful- and at the same time- unhelpful statement....

I had the vague recollection I've seen something about this Brazil set before- and Yikes!.. opening the Varro Tyler "Focus on Forgeries" book (copyright 2000) to page 47 showed the 1889 100 reis postage due Scott J4 forgery and genuine illustrations!

Luckily, I already had a 100 reis in my collection that I had vetted previously, and so I compared it to the rough newcomer... 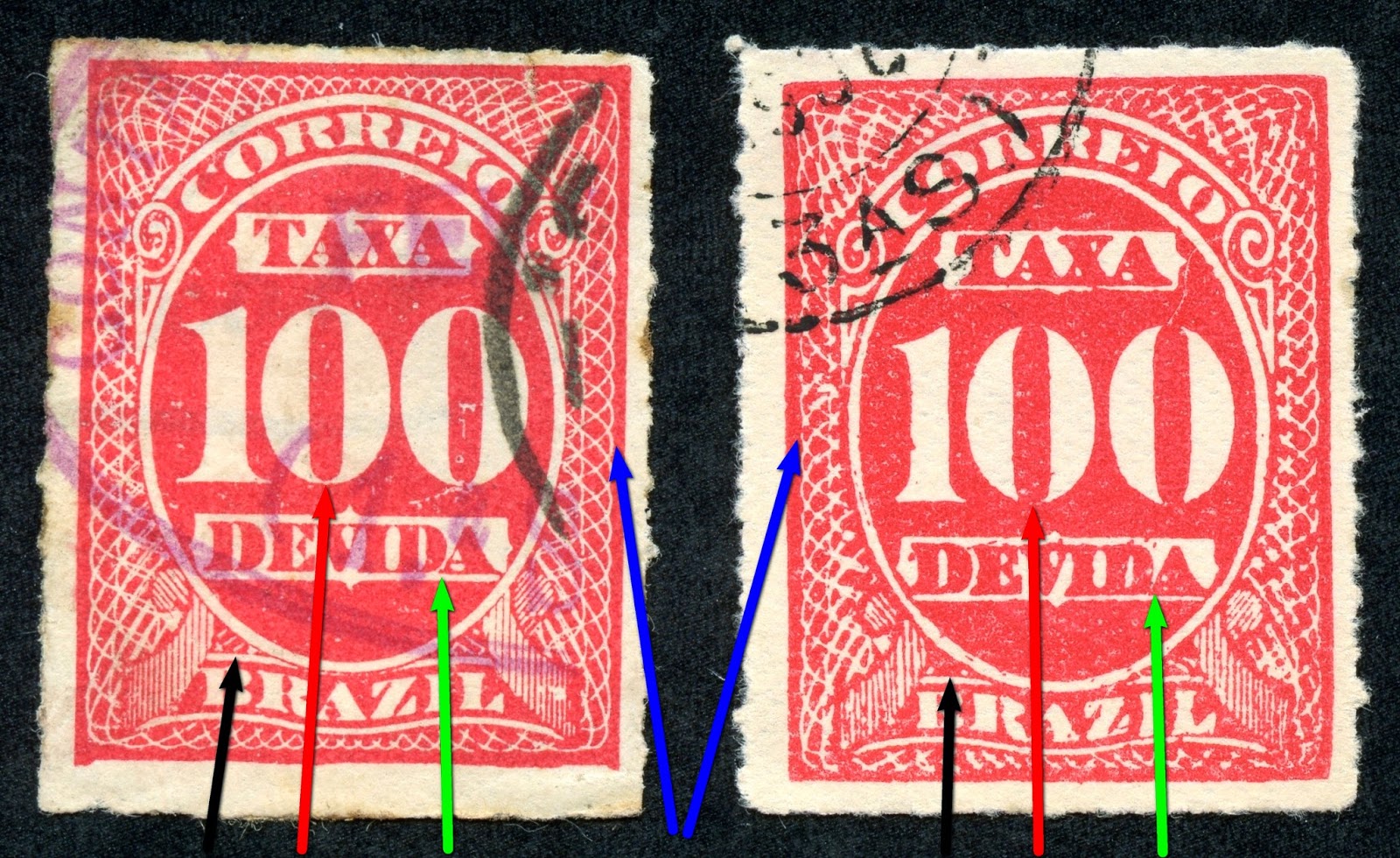 There are other differences as well if one wishes to look further.

Note the colors appear the same. So, although, I found a darker tint in several of the suspicious stamps, it is not a universal finding.

O.K., but can I extrapolate the results for the 100r to the other denominations? Tyler says nothing about the universality of the 100r signs.

And who made the forgery? 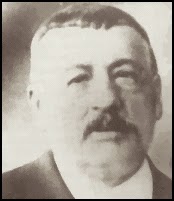 Francois Fournier 1846-1917
Geneva, Switzerland
Surprisingly, this rather bland and unassuming Brazil 1889 postage due set was forged by none other than Francois Fournier.

He saw himself as a champion of the "little man"- who could then own a beautiful and rare stamp at a fraction of the price of a genuine specimen. He rejected the pejorative "forger": rather, he was quite proud of his "art objects". His 1914 price catalogue listed 3,671 forgeries (not all produced by himself).

After he died, the Geneva Museum of History acquired his stock (thereby preventing some 800 pounds of forgeries from entering the philatelic marketplace). Representative examples were mounted in 480 special albums, and sold to interested parties for $25 apiece in 1928.

These Fournier albums are still floating around the philatelic landscape, and one can do an internet search and see visual examples of his forgery work.

So in short time, I found this image....

Fournier strip of Brazil 1889 Postage Dues
Nice enough, but there is a problem. There doesn't appear to be any images on the 'net with a resolution that would enable one to compare genuine and forgery stamps. !

Fournier Forgery Cancellation
Placing the stamps around so the cancel aligned like so... 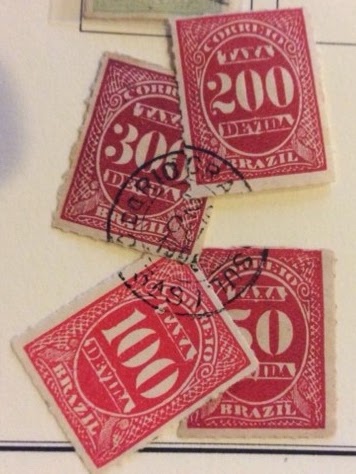 I informed my dealer of the findings, and he graciously looked through his stock, and sent me genuine copies. He was unaware that Fournier had forged this particular set - perhaps surprising, perhaps not, if the forgeries do not appear very often.

So what do the other forged denominations look like compared to genuines?.... 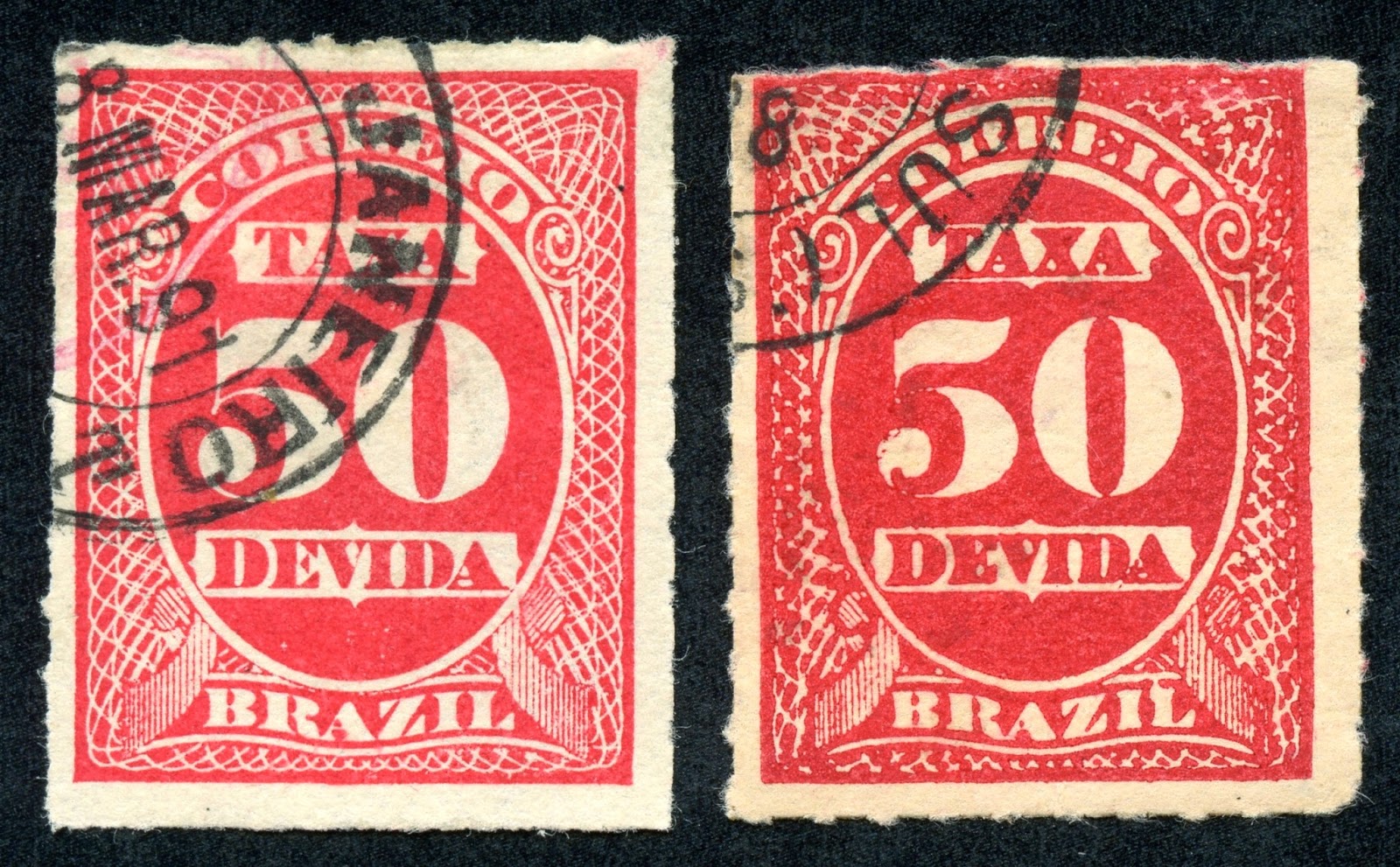 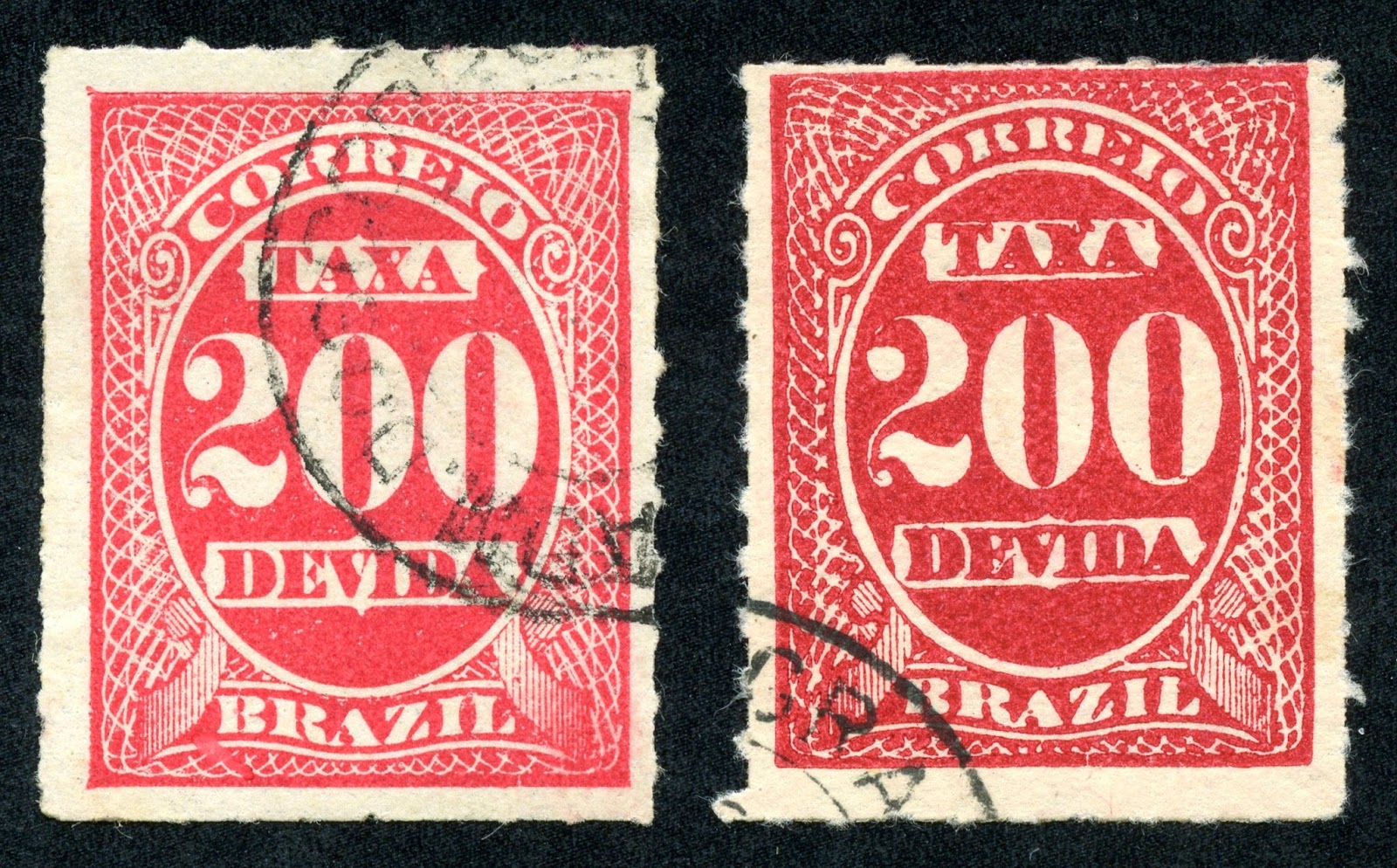 1889 Scott J5 200r carmine
Genuine; Fournier Forgery
The two white dots in the triangle above the "B" of "Brazil", the open "0", the rough "Taxa" and "Devida" script, and the cruder lattice architecture around the frame, are all found with the forgery. Note the darker color of the forgery. 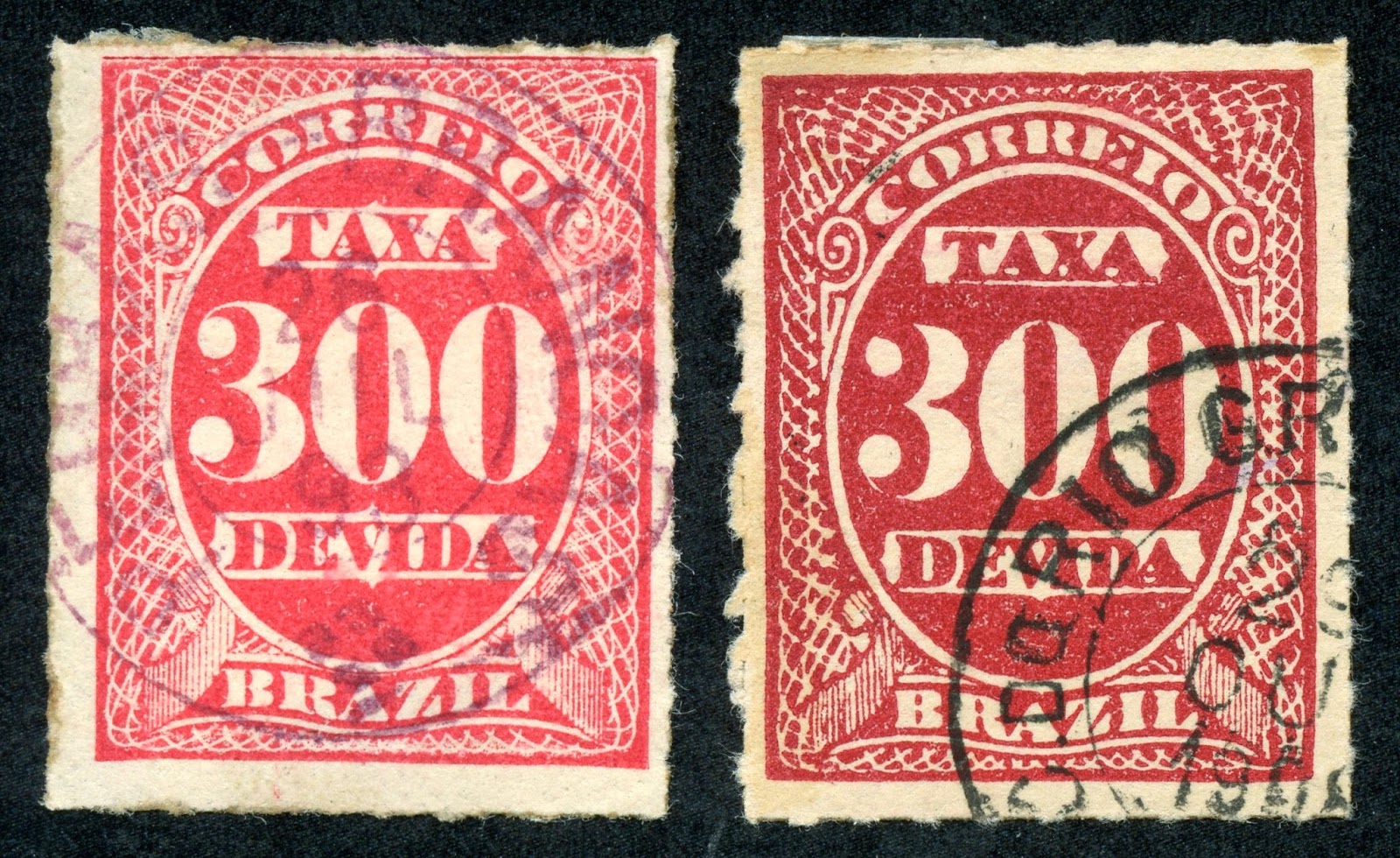 1889 J6 300r carmine
Genuine; Fournier Forgery
The same findings are found for the 300r carmine forgery. Again, in this example, the forgery is also darker.

I think it is reasonable to conclude, based on these examples, that the Fournier forgery has similar characteristics for all the nine stamps in the set. 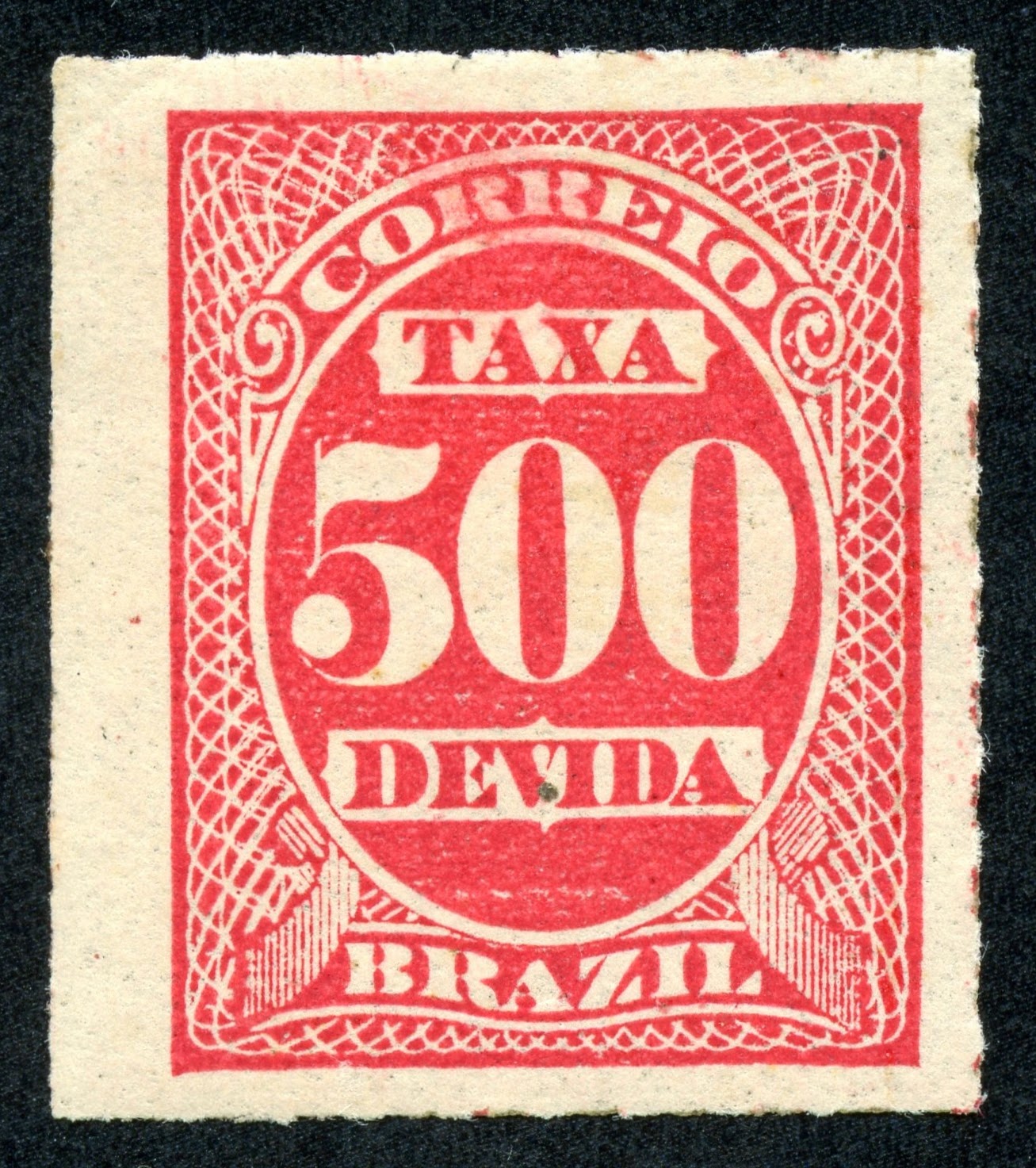 1889 Scott J7 500r carmine
Genuine
Out of the Blue
Out of the blue, an interesting development indeed! And I learned a few things. I hope you did too. (Perhaps you want to check your collection ;-)

Note: Images from Fournier album and Fournier pic appear to be in the public domain.