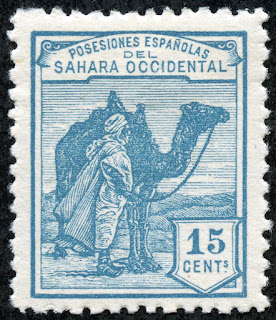 1924 Scott 3 15c turquoise blue
"Tuareg and Camel"
Quick History
Spanish Sahara or Spanish Western Sahara, as it was formerly known, was established in 1924 from the colony of Rio de Oro and the territory of Saguiet el Hamra. 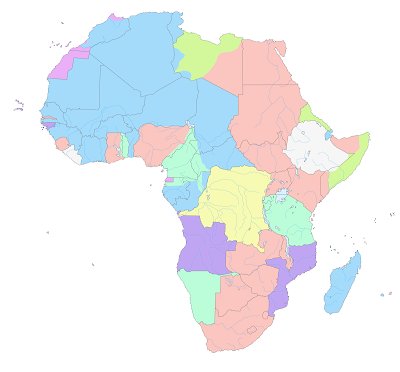 1913 Map of Colonial Africa
Magenta Color shows the Spanish Claims in North-West Africa
With the Berlin Conference of 1884, and the European Powers setting up spheres of influence in Africa, Spain declared an African Coast protectorate from Cape Blanc to Cape Bojador, and informed the other powers on January 14, 1885. (The Sahrawi had nothing to say about it. ;-) The colony was called Rio de Oro.  But the "Rio" was a wadi, there was no gold, and the landscape mainly consisted of coastal fog and desolate sandy escarpments. 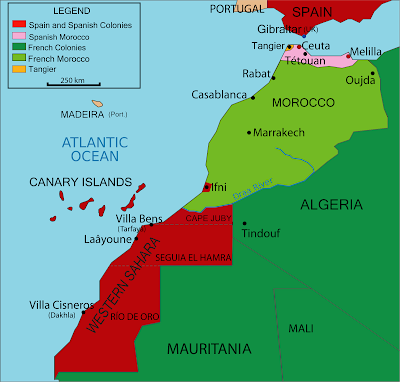 Map showing the Spanish Region of Western Sahara circa 1912
The borders of the Spanish claims were not well defined until France and Spain, through treaties, established limits in the early 20th century.

But in 1924, Spanish Sahara was created, and the "Tuareg and Camel" stamp issue was released.

Spain had opposition to "ownership", both internally (indigenous Sahrawi tribes), and externally ( Morocco, after gaining independence from France in 1956, laid claim to Spanish Sahara as part of its historic territory). To appease Morocco, Spain ceded the Cape Juby strip to them in 1958. Mauritania also claimed the lands (The Mauritania claims were eventually withdrawn) . Ifni was returned to Morocco in 1969. 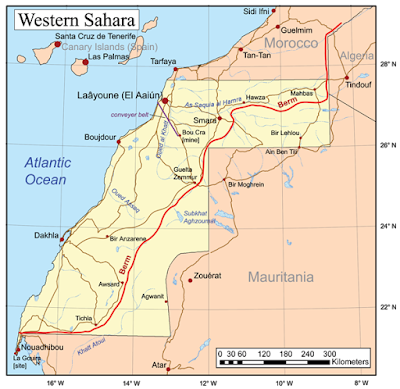 Western Sahara
Finally, with additional UN resolutions demanding decolonization, Spain withdrew in 1975, and Morocco occupied the country. But, in turn, there was a Sahrawi guerilla war against Morocco, lasting sixteen years, until the UN negotiated a cease-fire. 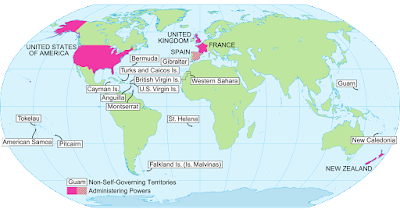 Western Sahara is considered a "Non Self-Governing Territory" by the UN
Morocco has resisted allowing a referendum on independence to be held, and the sovereignty of the lands is still under dispute. 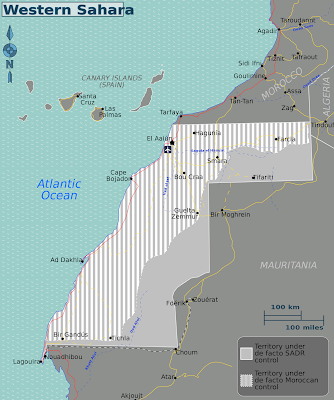 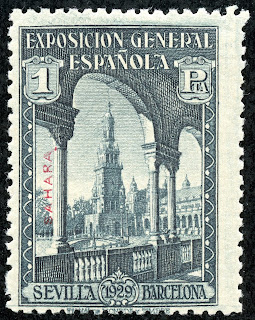 1929 Scott 21 1p blue black "Exposition Buildings"
Seville-Barcelona Issue of Spain, Overprinted in Blue or Red
Into the Deep Blue
The 2014 Scott Classic Specialized 1840-1940 catalogue has, for Spanish Sahara 1924-1931, 47 major descriptive numbers in the regular and semi-postal categories. Of those, 29 are CV <$1-$1+, or 62%. From the point of view of CV, the WW classical era collector should be able to put together a representative collection without much cost. The problem for U.S. based collectors, as I've mentioned before, is Spanish colony stamps are not that prevalent in general collections. One may need to hunt for them.

For myself, when I was ready to review Spanish Sahara, and prepare this blog post, I had only two! stamps in my collection. Fortunately, I found an auction lot on the 'bay, and ended up with 100% coverage. That was lucky- my other Spanish colony holdings are not nearly so complete. ;-) 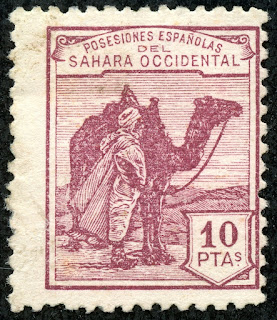 1924 Scott 12 10p claret "Tuareg and Camel"
The first issue for Western Spanish Sahara proper as a new administrative and colonial entity was the twelve typographic stamp issue of 1924 with "Tuareg and Camel" design. For prior issues of the region, see Rio de Oro. 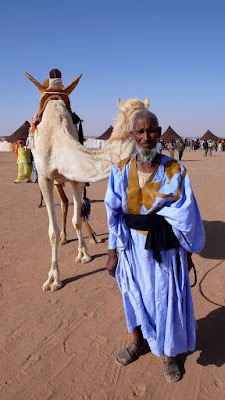 Sahrawi and Camel
The Tuareg people and language is a subset of the Berber branch, and they are found within the Saharan interior of North Africa. Traditionally, they live a pastoral and nomadic existence.

Specific to Western Sahara, the Sahrawi people are found, and have mainly a mixture of Berber-Tuareg culture.

Of interest, my 1947 Scott catalogue labels the scene "Moor and Camel".

The 2014  Scott catalogue has a note that this issue was for use in La Aguera and Rio de Oro.

As is usual for Spanish colonial stamps, there are control numbers on the back. 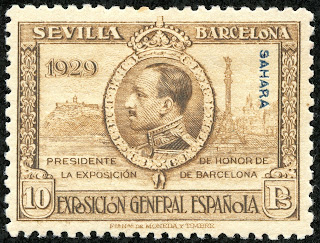 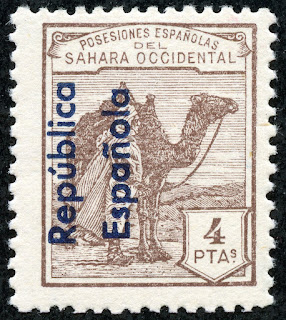 1931 Scott 34 4p chocolate
Stamps of 1924 Overprinted in Red or Blue
Spain in 1931 replaced the Constitutional Monarchy of Alfonso XIII with the Second Spanish Republic. Alfonso XIII left the country, but did not abdicate until 1941.

The overprint can be found going up (usual), going down, and horizontal. 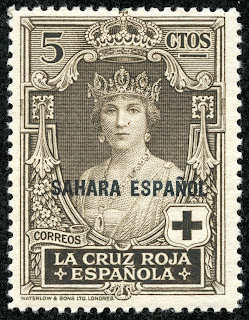 1926 Scott B1 5c black brown
"Queen Victoria Eugenia"; Red Cross Issue
Types of Semi-Postal Stamps of Spain, 1926, Overprinted
The 1926 engraved semi-postal stamp issue of Spain was also printed in some different denominations and different colors, and overprinted for use in the various Spanish colonies ( Cape Juby, Spanish Guinea, Spanish Morocco, Spanish Guinea), also in 1926. The twelve stamp issue for Spanish Sahara has a CV ranging from <$1-$8+.

Of interest, the 20c violet brown color, intended to be overprinted for use in a Spanish colony (as the ordinary color for the Spain 20c is dull violet), has been found without overprint, and so is considered a color error, valued @ CV $375. 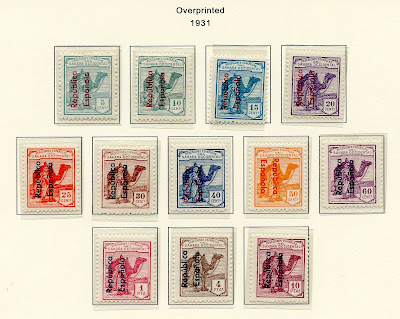 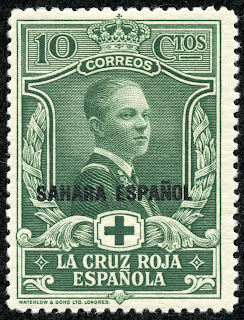 The coverage significantly increased, compared to the 40s editions, (Then labeled "Spanish Western Sahara"), where there were only 25 spaces on one page.

The flip side to the generous coverage in the '69 ( and subsequent editions) is there are some expensive stamp spaces to fill. ;-)

I suspect these stamps may be a couple of the more difficult ones to find for those collectors who are attempting to complete a  Big Blue. To wit, a stamp buddy, who has less than 360 spaces to fill in BB, is looking for these stamps. ! 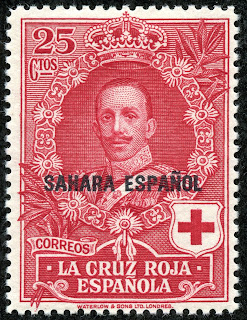 1926 Scott B5 25c deep carmine "Alfonso XIII"
Red Cross Issue
Types of Semi-Postal Stamps of Spain, 1926, Overprinted
Out of the Blue
The lands are some of the most inhospitable and arid of any on our earth. We should be grateful for any stamp from there so bright and tangible. ;-) 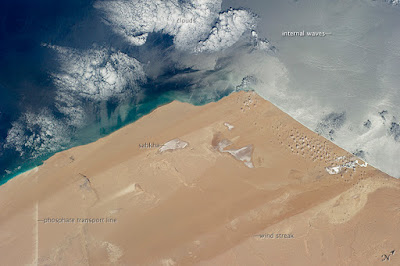 Desert Coast of Morocco and Western Sahara from the International Space Station
Posted by Jim at 11:20 AM