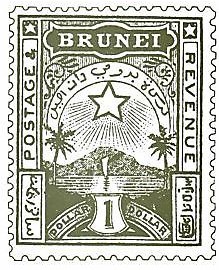 The Brunei River shows prominently on all stamps from 1895 to 1949, except the overprinted Labuan stamps. More interesting, however, are the houses shown on the river. Roofs and walls of stitched nipa-palm fronds and floors of bamboo are attached to the frame with rattan; the whole is supported on wooden stilts anchored in river mud. Parts are joined without nails or milled lumber.

The homes cluster in small villages linked by foot-bridges. Collectively the water villages are known as Kampong Ayer. Villages have other buildings, too, such as mosques, restaurants, shops, schools, and infirmaries.

Some of these, with a little imagination, might be identifiable in the 1924-31 panoramic issue (row 3). These stamps do clearly show a passing tug boat towing coal barges and, in the foreground (forewater?), three water taxis. On the far shore is the site where the Sultan Omar Ali Saifuddin Mosque will be constructed.

Jim's Observations
Nice issues- hard to tell they are "British", as no typical queen-king clues on the stamps. The fact that Brunei was a British protectorate, rather than a crown colony, probably explains this. 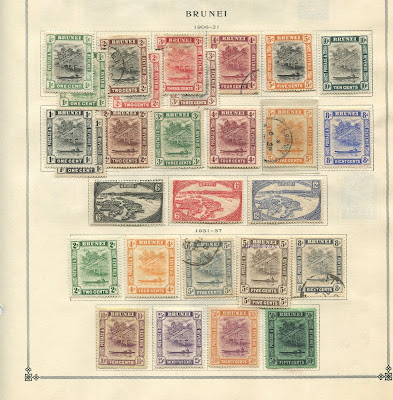