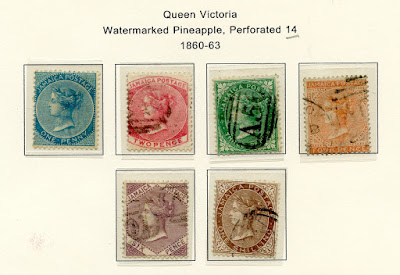 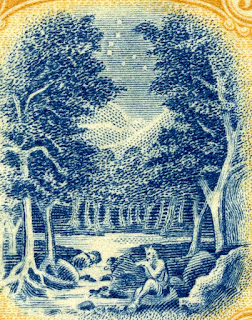 And if I had started this ambitious project, say, when I was in my forties - no problem.

But I am of the age where I must take out the Required Minimum Distribution from retirement accounts each year. ;-) 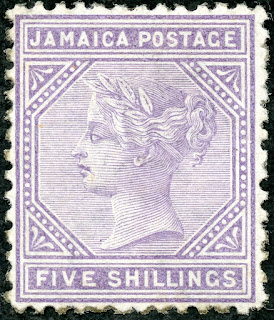 Jamaica 1875 Scott 15 5sh violet
And we have four grand kids (ages 1 year to 5 years) nearby. We pay lots of attention to them. 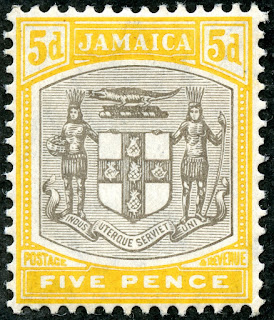 Jamaica 1907 5p yellow & black
"Arms of Jamaica"
Chalky paper, Wmk 3
The past several years my collecting strategy was to find and obtain country specialty collections that had stamps through the 1950s-1960s ( and sometimes 1970s-1980s). 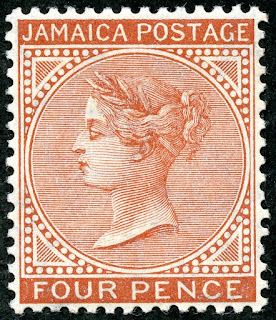 Jamaica 1908 Scott 49 4p red brown "Victoria"
Ordinary paper, Wmk 3
It is actually a great way to obtain a decent collection for a country, and one is usually only paying in the teens CV wise for the stamps. I recommend it for WW collectors as long as one is also collecting into the 1970s. Many of the stamp filled country specialty albums that are available for sale do seem to stop around 1970, give or take ten years. 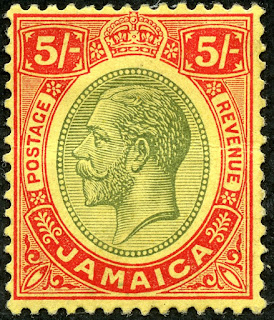 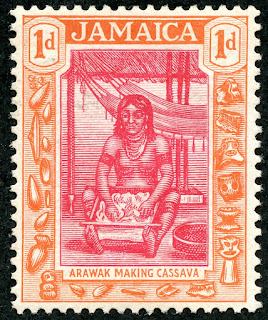 Jamaica 1921 Scott 76 1p orange & carmine
"Arawak Woman Preparing Cassava", Wmk 3
So if obtaining country collections is a great way to expand one's WW collection, why are you having second thoughts about this approach, Jim Jackson?

Time and Tide wait for no man.
Geoffrey Chaucer 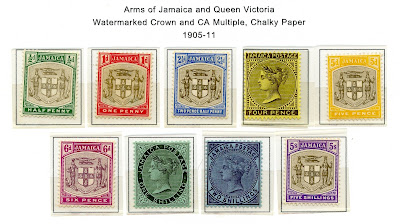 When I obtain a country collection - say Mexico - I first go through the 1840-1940 portion and add those stamps to the Deep Blue (Steiner) 6,500 classical era pages that I already have housed in some 58 Lighthouse Vario F & G binders. I also upgrade stamps if the newer collection has better copies.

I also attempt, with the extra copies of 1840-1940 stamps that I have, to add them into the spaces found for that era in my Minkus Global Supreme album.

Then I look at the 1940 - 1970 (or so) portion of the country collection, and add them to the Minkus Global Supreme pages, using hinges or  mounts. 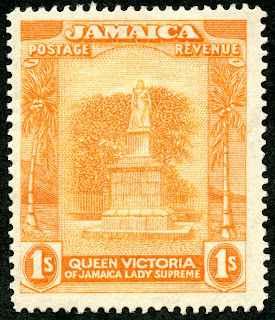 Jamaica 1920 Scott 83 1sh bright orange & orange
"Statue of Queen Victoria", Wmk 3
I simply do not have the time to do this justice.

Lately, I find I'm leaving the 1940 ~1970 stamps in the original country albums. Too much work to remove them. 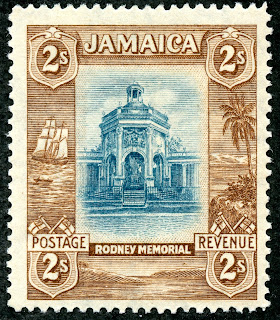 It all feels unresolved and unfinished.

Every time I walk past that room, I'm reminded that the second law of thermodynamics suggests there will be a gradual decline into disorder (entropy). 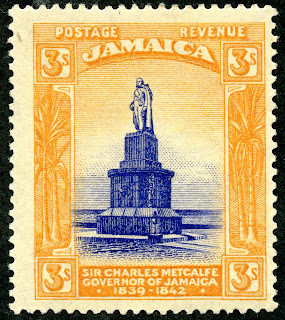 Yes, if I was a younger lad, I would think about putting the 1940-1970 era stamps into Steiner pages.

But the shelf space required would be rather large, and I don't want to start a new "stamp housing" project. And if I don't have the time to put the stamps into the Minkus Global pages ( or Big Blue pages if I elected that), why do I think I would be able to put them into Steiner pages?

I could have started out my WW collection by gradually accumulating Scott Specialty Country albums, and used them as the basis for the WW collection. Too late for that now.

I could put the 1940-1970 era stamps into Vario pages. I just can't work up much enthusiasm for doing that. 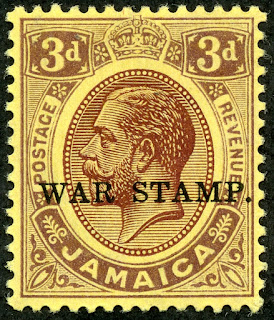 But something has to give.

So to constrain the stamp hobby within time and space parameters, I am going to no longer actively collect the 1940-1970 stamp era.

Want lists for the 1840-1940 era will assume more importance, and country collections (especially those that offer not much new for 1840-1940) will now be ignored. 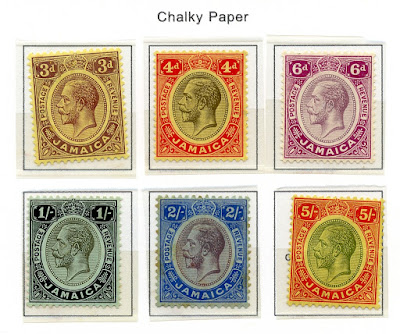 And that slice of philately, as we know, takes a lifetime (and more!) to study.