Ascension - a closer look at the stamps and issues 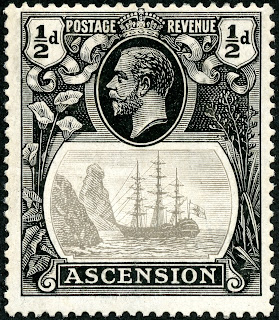 The Ascension issues are perhaps a bit more interesting than most British island colonies, as the earlier issues are in a large pictorial format, and then the 1934- 1949 issues include plenty of George V & VI bi-color engraved pictorials.

The original blog post and checklist for Ascension is here. 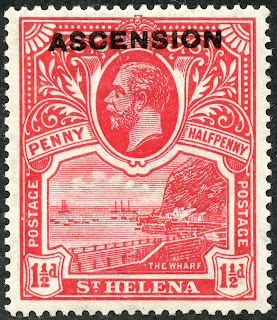 1922 Scott 3 1 1/2p rose red
Stamps and Types of St. Helena 1912-22 Overprinted
Between 1855-1922, some 63 different British stamps on covers can be found with a datestamp of Ascension, which was used as a Royal Navy stopover between 1816-1922.  In Scott, these stamps have a number prefix "A", are quite expensive, are specialist territory, so I will say no more about them.

The first issue for Ascension consisted of nine stamps in large format released on November 2, 1922. They are stamps and types of St. Helena, overprinted "Ascension" in black or red. This makes sense, as the small volcanic island, with only a population of 100+, had been just annexed administratively to British St. Helena.

Ascension Island is found in the middle of the South Atlantic Ocean, and is located 800 miles from St. Helena!

The stamps show the Government House on the Wharf on St. Helena.

And, as one can imagine, considering the small population and only one post office (Georgetown), "used" generally have a higher CV than "unused" during the classical era for Ascension. 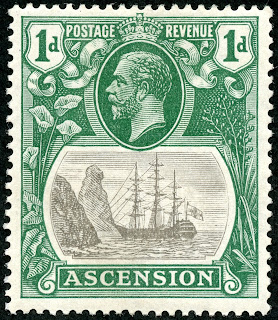 1924 Scott 11 1p green & black
"Seal of the Colony"
Between 1924-1933, a twelve stamp issue featuring the "Seal of the Colony" was released. Actually, as Ascension was part of the St. Helena colony, the public seal of the colony is a scene from St. Helena, showing a three masted ship near the cliffs. In 1874, when the original badge was drawn, the flag depicted was a White Ensign.

Of interest, the SG Commonwealth & British Empire 1840-1970 catalogue illustrates some six constant plate flaws found for the issue. These are worth CV wise 10-20 X the base price, and the WW collector might want to check his/her collection. 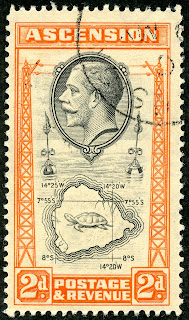 The (now protected) endemic Green Sea Turtle is also illustrated, which comes ashore to lay eggs from November to May.

Charles Darwin, with his 1836 Beagle Voyage, described it as arid and treeless.

As the saying goes.."People of St. Helena know they live on a rock, but the poor people of Ascension live on a cinder" 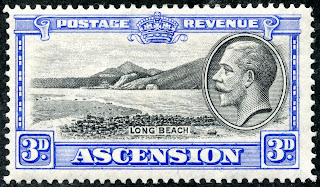 1934 Scott 27 3p ultramarine & black
"Long Beach"
Long Beach is a golden sand beach near Georgetown. Although it looks inviting, the undercurrents make it unsafe for swimming. On the other hand, it is one of the main nesting sites for the Green Turtle. 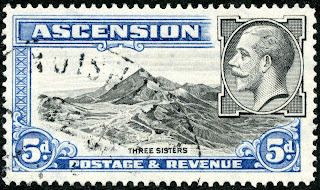 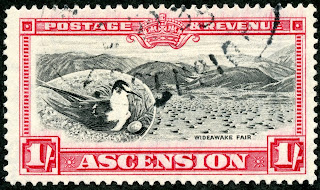 1934 Scott 30 1sh carmine & black
"Sooty Tern Breeding Colony"
On Wideawake Fair (see map) was and is a Sooty Tern breeding colony. They are also known colloquially as "wideawake birds", because of their incessant calls.

What a great looking stamp! 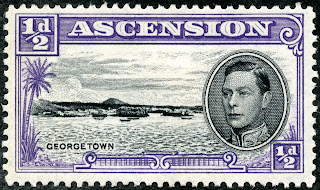 Between 1838-1953, a sixteen stamp George VI pictorial issue was released. Five scenes from the 1934 George V issue were recycled.

Of note, the SG 1840-1970 catalogue illustrates four constant plate flaws for this issue.

A Naval base was founded at Georgetown on Ascension in 1816, in order to prevent the French from making use of the island if they (the French) attempted to rescue Napoleon, who had been banished to St. Helena island. 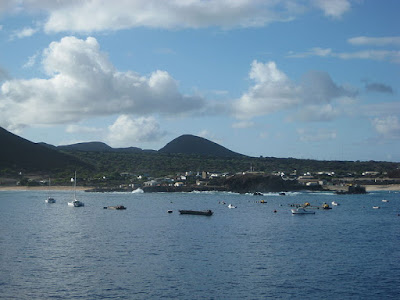 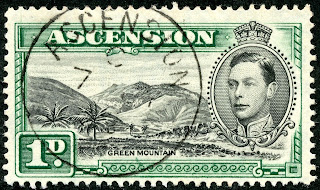 Today, it is essentially an artificial forest, what with all the introduced species put there over the years. But now, it is managed to conserve the remaining endemic species. 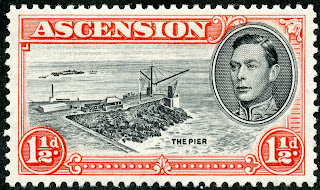 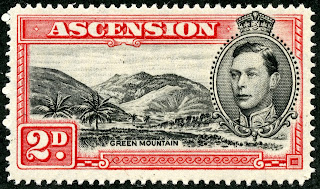 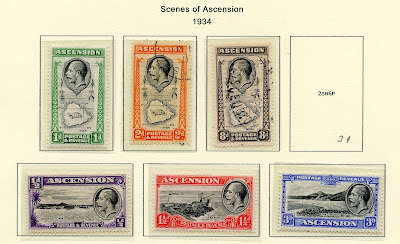 1934 Issue "Scenes of Ascension" in Deep Blue
Deep Blue (Steiner) has seven pages for the 1922-1949 stamps of Ascension. All the major Scott numbers have a space. In addition, there is a page for the various minor numbers for the perforation varieties of the 1938-49 George VI pictorials. 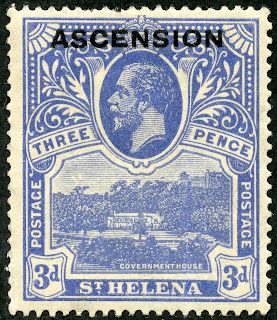 Note: Map and the "Georgetown Today" pic appear to be in the public domain.