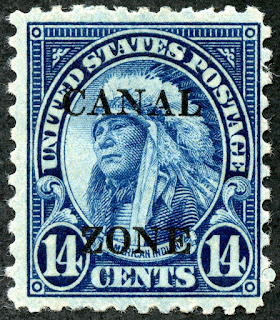 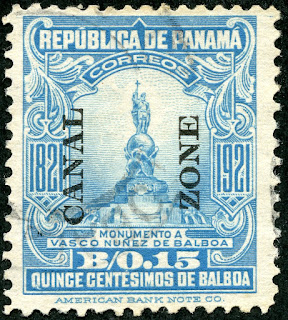 1921 Scott 64 15c light blue "Statue of Balboa"
Type V Overprint in Black Reading Up
In 1921, using seven stamps from Panama, a seven stamp overprinted issue (reading up -Type V) was released on November 13. CV ranges from $1+ to $80+. All of the overprints are in black, except for the 5c blue, which is in red, and with larger type. 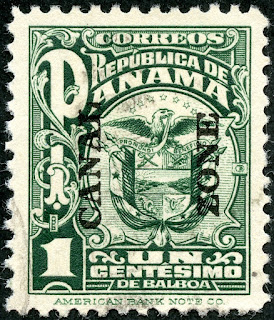 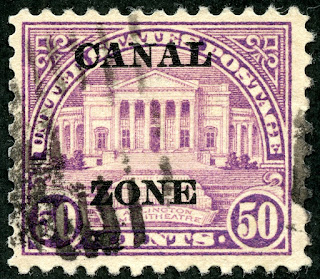 1924-25 Scott 80 50c lilac "Arlington Amphitheater"
Overprinted; Type "A": letters "A" with Flat Tops
Between 1924-25, a twelve stamp overprinted issue, using US stamps, was issued. The issue is characterized by the letter "A" having flat tops (Type "A"). 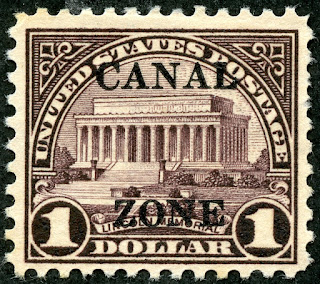 1925-28 Scott 95 $1 violet brown "Lincoln Memorial"
Overprinted; Type "B": Letters "A" with Sharp Pointed Tops
Then, between 1925-1928, a twelve stamp issue, again using US stamps (perf 11), was released with overprint as shown. This overprint (labeled Type "B") has the letters "A" with sharp pointed tops.

Again, the Scott Classic 1840-1940 catalogue does not give specific date release information, other than lumping the issue date from 1925 to 1928. Not good. The Scott US Specialized says the $1 violet brown (above) was released on April, 1926 with 20,000 stamp count. 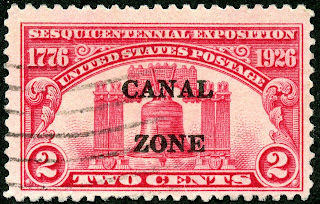 1926 Scott 96 2c carmine rose "Liberty Bell"
Overprint Type "B"
In 1926, the US 2c carmine rose Sesquicentennial Exposition stamp was overprinted as shown for the Canal Zone. CV us $3+. 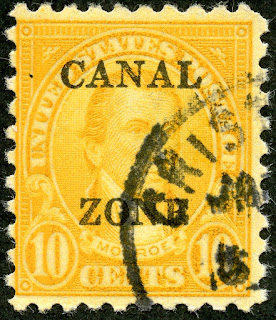 Note the perforation is 10. That will distinguish this issue from the next one. 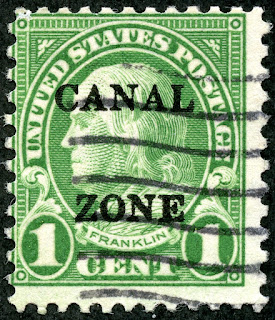 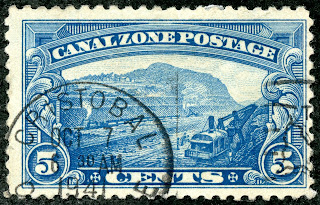 1928-40 Scott 107 5c blue "Gaillard Cut"
Perf 11
Between 1928-1940, a ten stamp Canal Zone issue (designed specifically for them!) was released. All of the stamps show portraits save for the 5c blue pictorial (shown above). Again, the Scott 1840-1940 catalogue does not give specific stamp release dates. If one turns to Scott US Specialized, the released dates are given, as well as wet/dry printings (wet printings minor numbers). Suffice to say, if one is interested in more information on Canal Zone stamps, it is wise to have a US Specialized catalogue. 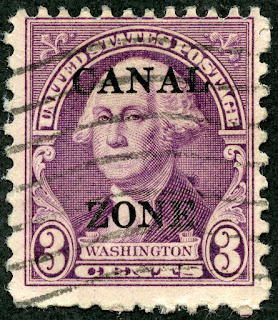 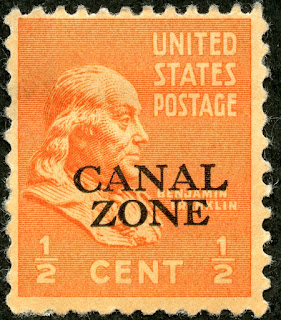 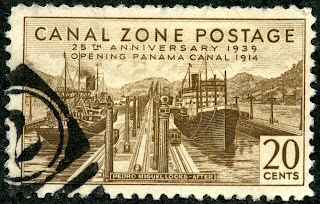 1939 Scott 133 20c brown
"Pedro Miguel Locks - After"
On August 15, 1939, a sixteen stamp Canal Zone 25th Anniversary of the opening of the Panama Canal pictorial issue was released, with sixteen Canal Zone scenes! Actually, the stamps are paired, with one stamp showing a "before" and another stamp showing an "after" of the same location.

Of interest, the US Scott Specialized has a note that states the stamps were withdrawn on February 28, 1941, with the remainders burned on April 12, 1941. 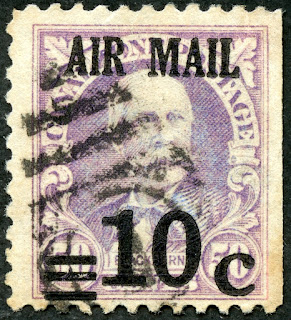 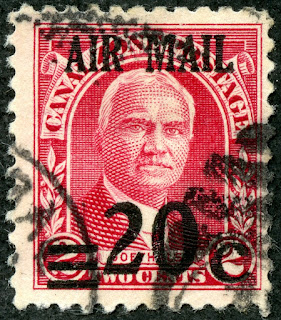 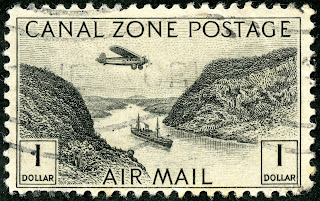 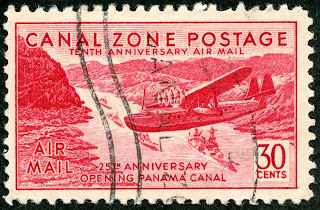 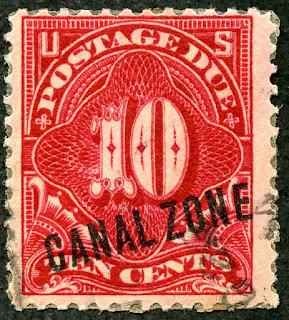 According to Scott, prior to 1914, postage issues were handstamped "postage due", and used as postage due stamps. 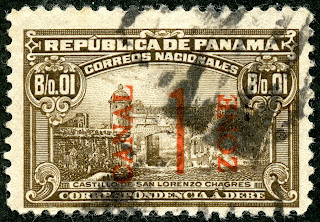 1915 Scott J7 1c on 1c olive brown
Surcharged in Red
Between 1915-19, Panama stamps were overprinted or surcharged (nine stamps), and used for postage dues. The overprints/surcharges can be found in blue, red, or carmine.

Specifically, the three stamp November, 1915 issue was surcharged in red (shown above). 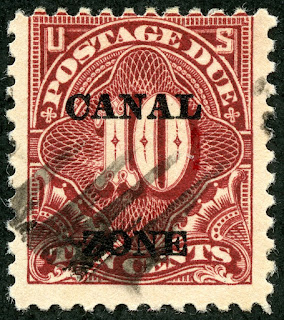 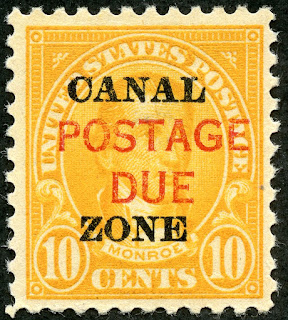 1925 Scott J17 10c orange "Monroe"
Additional Overprint in Red
In February, 1925, a three stamp postage due issue was created by using 1924 US regular issues that were overprinted "Canal Zone" (Type "A"), with an additional overprint in red or blue. 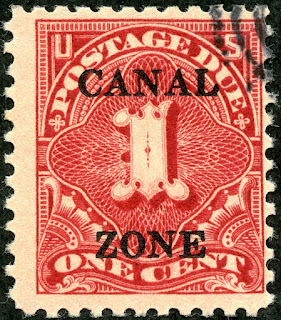 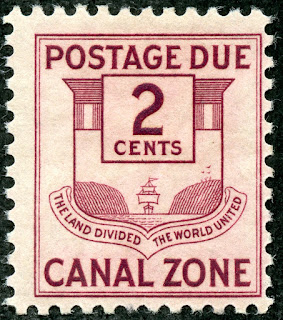 Canal Zone 1928-40 Issue in Deep Blue
Deep Blue (Steiner) has eight pages for 1921-40 regular issues and BOB. All the major numbers have a space. 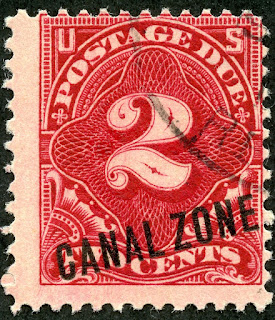 1914 Scott J2 2c rose carmine
Postage Due Stamps of the U.S. Overprinted in Black
Wmk 190
Out of the Blue
I would think the Canal Zone would be a great area for a specialist - so many possibilities. I might revisit the Canal Zone for my own collection, as I find the stamps quite fascinating.