How did my collection grow this past 2017 year? 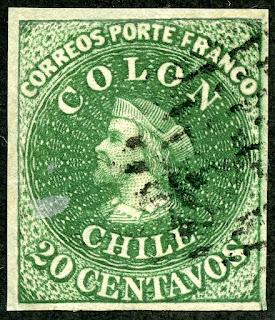 Chile 1862 Scott 13 20c green "Columbus"
London print, Wmk g
Into the Deep Blue
Every year at this time I like to see where I have been, and where I am going with my collection.
To recall, the "classical era" limit of my WW collection is 1840-1940, with an extension for British Commonwealth through 1952. The ultimate collection, 100% filled, would have 83,458 (Scott major number) stamps. Needless to say, that, is an unattainable goal, but the fun is the journey along the way! 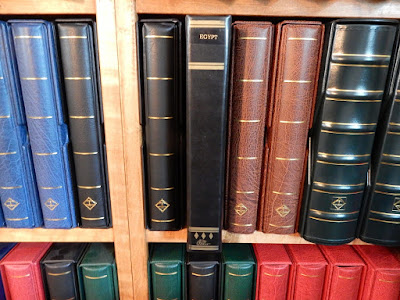 I will make a comment about adding fewer stamps overall this past year for the classical era in the "Out of the Blue" section.

Now,  back to the task at hand - how did my WW collection specificaly grow by country count during the 2017 year for the 1940-1940 (-1952 British Commonwealth), understanding the growth was from feeder albums, rather than want lists?

And here is the list of the top countries added for 2017 from feeder country albums. Philippines 1899 Scott 218 15c olive green "Clay"
Issued under U.S. Administration - On Scott 1898 Scott 284 Wmk 191
1) Philippines/ 147
I obtained a country collection of the Philippines. and from that, added 147 stamps to Deep Blue. I also added 21 stamps to the virtual Big Blue, which completed the Philippines spaces. 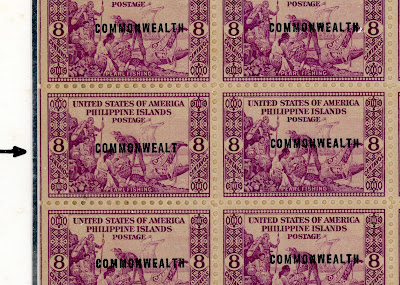 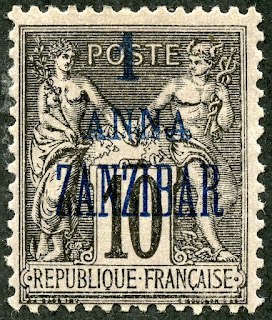 1896 Scott 19 1a on 10c black/lavender Type II
"Peace and Commerce", Blue Overprint
France Offices in Zanzibar
2) France/ 93
A Scott Specialty album of France yielded 93 stamps for Deep Blue, and 25 stamps for the virtual Big Blue, all from the French "Offices" section (mostly from China). The rest of the album awaits pillaging in 2018. !! 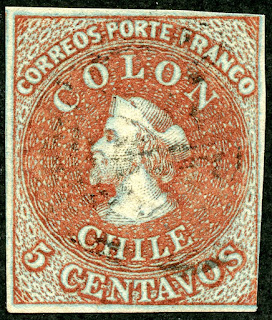 I obtained a very nice Chile collection at single digit CV rates from a fellow club member, who is a part time local dealer.  I harvested 82 stamps for Deep Blue, and 18 stamps completed the virtual BB Chile spaces. 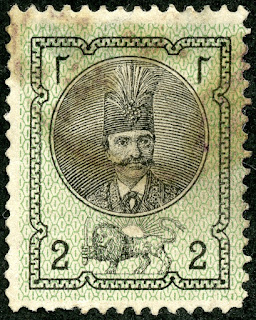 Persia (Iran) 1876 Scott 28 2s green & black
Lithographed, "Nasser-eddin  Shah Qajar"
4) Persia/ 73
Back when I was in my twenties, I had one of my periodic flares of interest in WW stamp collecting, and bought from a dealer in Duluth, Minnesota, a Persia,collection. That served as the basis of my Deep Blue/Big Blue holdings for Persia when I rekindled my interest big time in 2011.

That was until this year, when a second Persia (Iran) collection was obtained, yielding 73 stamps for both Deep Blue, and the virtual Big Blue. 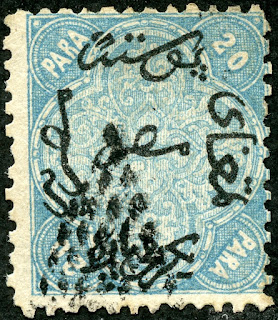 Egypt 1866 Scott 3 20pa blue
Surcharged in Black, Turkish Suzerainty
5) Egypt/ 71
One of my favorite countries to collect is Egypt. I obtained an Egypt (and also Sudan) collection in a fine Palo album this year, yielding 71 stamps for Deep Blue. The album also produced 13 stamps for the virtual Big Blue, within one of completing all the spaces for Egypt. 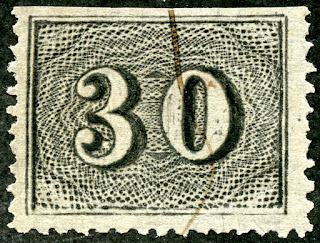 Brazil 1866 Scott 44 30r black, Perf 13 1/2
With Cert
6) Brazil/ 56
A Brazil/Bolivia Minkus country album has awaited attention for several years, and I finally got around to it.

I found 56 more stamps for Deep Blue. For the virtual Big Blue, 2 stamps were added, leaving only 2 spaces not filled out of 274. 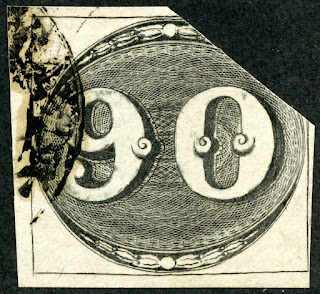 Brazil 1843 Scott 3 90r black (clipped)
Grayish paper, Fine Impressions, Engraved, Imperforate
Issues of the Empire
I do have a question for readers.

I have two Brazil stamps- the 90r black (shown above) and the Scott 2 60r black - that are significantly clipped on the upper right corner. Obviously that decreases the CV (for the 90r, $1,300), if they are genuine, to probably less an 5%. But why were they clipped? Remainders? 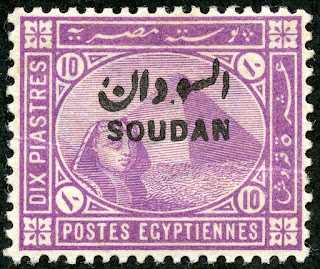 I harvested 56 stamps for Deep Blue, and 15 stamps for the virtual Big Blue, completing all the spaces. 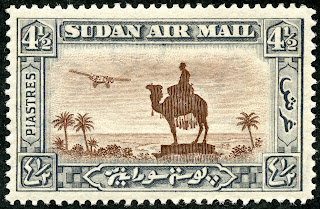 Sudan 1931 Scott C12 4 1/2p gray & brown
"Statue of Gen. C.G. Gordon"
Engraved, Perf 14
The Palo album I have follows exactly the layout of Deep Blue (Steiner), except on a much larger page. In March of this 2018 year, I will do a comparison review of Steiner/Palo for those with an interest in this topic. 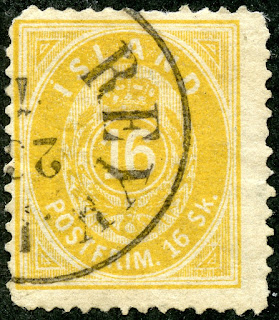 This added 51 stamps to Deep Blue, and 2 stamps to the virtual Big Blue, filling all the Iceland spaces.

A note about the 16 Skillings yellow shown here: Whether this is a genuine cancel (CV $3000) vs a false/favor cancel (CV $575) makes a lot of difference. 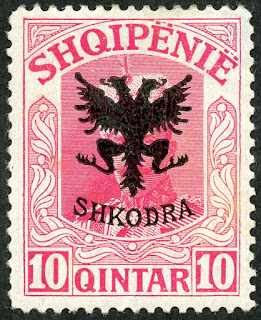 Albania 1920 Scott 121 10q rose
"Prince zu Wied"; Black Overprint
9) Albania/ 48
Albania is one of those countries that I find it difficult to find stamps for, or perhaps it may just be that I have other priorities, and Albania is an afterthought.

Nevertheless, I found a good (but not great) Albania collection, that yielded 48 stamps for Deep Blue, and 2 stamps for the virtual Big Blue. A reality check shows I have 70 spaces filled in Big Blue, but there are still 43 empty spaces. If one would like to appreciate full pages for Albania, take a look at Bud's astounding Big Blue album. 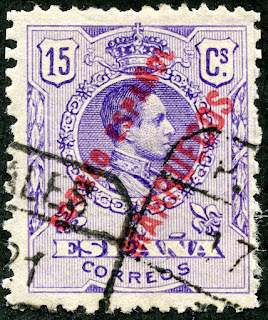 Spanish Morocco 1909 Scott 17 15c violet "Alfonso"
On Spain Stamps of 1909-10
Overprinted in Carmine
10)Spanish Morocco/ 41
Although the majority of stamps added this past 2017 year was through feeder collections/albums, an exception was Spanish Morocco. 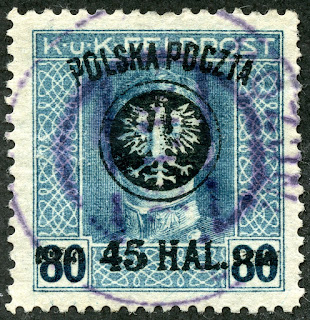 Poland 1918 Scott 38 45hal on 80h deep blue
Austrian Military Stamps of 1917 Surcharged in Black
Bars instead of Stars over Original Value
11)Poland/ 33
Poland is a favorite country of mine, perhaps because I admire the historical spirit of the Polish people in the face of Nazi Germany oppression and communist rule. So when an opportunity came up to buy a Minkus Poland country album, I did so.

I found 33 stamps for Deep Blue, and added 3 stamps to virtual big Blue. I now have 344 spaces filled, but still lack 11 spaces in BB. 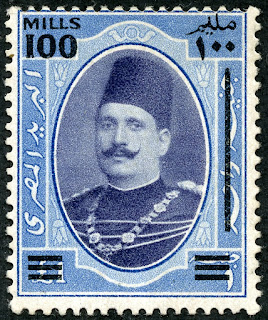 "I fully expect not to do as well this coming year with my classical era collection. I think another 4000 stamp increase is unrealistic.  The "low hanging fruit" from feeder collections will not be as available, because I am no longer significantly weak in any major regional category, except perhaps for the Spanish colonies.

But part of the reason I expect not to do as "well" this year is my goal for 2017 is a bit different.

I have, left over, from pillaging the 1840-1940 era, many feeder albums/collections that have a significant amount of stamps from 1940-1967. They are perfectly wonderful specimens of " Les Semi-Modernes" era, as the Yvert catalogue like to put it, and I would like to place them into my new thick paper Minkus Global Supreme pages I've acquired from Amos Advantage/Scott this past year."

Well,, that is exactly what happened, so not surprising in the least. !!

With the virtual BB  ~ 87% complete, and Deep Blue ~ 58% complete, the ability to add new stamps at the same quantity as before is not realistic.

And, I added very few stamps from want lists this past 2017 year. (This is the most effective technique when a collection is already fairly full.)

Rather, my purchases were additional country feeder albums. Although clearly, I added stamps to the  "Deep Blue" album, an additional focus was expanding the WW collection coverage for the 1941-1969 years. For more, see my blog post - Beyond the Classic Blues - An Introduction.

This expansion of my collection up to 1969 WW is still ongoing. The results are pleasing to me. I am enjoying the stamps and the history they reflect.

But I am having great fun with the 1941-1969 stamp era, and much of my current  time is involved with transferring these stamps from feeder albums to "Big Red" (Minkus Global Supreme Albums).

This coming year I expect the same trends: more 1941-69 stamps from feeder collections, and some additions to the 1840-1940 collection though want lists and perhaps through collection purchases.