I still feel a slow burn about my prized Lithuania #B43 error being a fake (see it here). So, I’ll make no claims about any anomalies that have tucked themselves into my Memel/Klaipėda BB album and its three supplement pages (all showing below). Fakes mushroomed among Memel’s stamps during BB’s classical era. Among Lithuania’s, too. Some even have fake cancellations!

Genuine or fake? Scan 2
So, what’s a world-wide collector to do? Hire an expert? Spend a lifetime becoming a sharp-eyed sleuth on Memel/Klaipėda /Lithuania fakes and forget world-wide collecting? Fill the album with whatever is cheap and hope that at least some of them are genuine?

Genuine or fake? Scan 3
I’m too stingy to pay an expert, too old to train as a sleuth, and too annoyed by fraud to shut my eyes to the fakes entirely. So, what’s a world-wide collector to do?
Fakes make it difficult to have fun with Memel’s stamps -- but that’s not the only thing. Their black overprints shroud an even darker history of aggression, war, occupation, demolition, and failed peace initiatives.

Before becoming interested in Memel/Klaipėda philately, read the on-line histories of how the Versailles Treaty invented Memel in 1919, and what went on both before and after that. Many nations fought to control Memel/Klaipėda, one of the few ice-free ports in the eastern Baltic Sea. Even in its recent prosperity, Klaipėda’s scars remain. The current polyglot and ethnically diverse residents don’t talk about the scars much, though. Some, the ones I know, scorn their history prior to 26 December 1991, the end of the Soviet Union.
Back to the forgeries and what to do.

Jim's Observations
Bud raises a valid point: overprint stamps are very difficult (without specialist's knowledge) to evaluate for genuineness. Most collectors do not even bother. I know one prominent WW collector with extensive holdings who refuses to collect overprint stamps for that very reason.

On to the history...

Memelland (Klaipeda), ripped from one country to another, and then back again, and back again, has an interesting history, to say the least.Memelland was located on the Baltic Sea north of the Memel (Neman) River, and was part of Prussia prior to WW I. Population was ~ 152,000.


But many residents outside the port city of Memel were Lithuanian. Consequently, Lithuania wanted the Memel lands after WW I, but the Allied Powers assumed control with a French administration in 1920.

Then there developed a plan to make Memelland a Free State, supported by German and Polish interest groups.

That was too much for the Lithuanian inhabitants of Memellland.  With Lithuanian support, by January 15, 1923, they had seized the government and lands. Although protested by the Allied Powers, the "de facto" situation was eventually accepted, and Memelland became an autonomous region within Lithuania. The port of Memel was renamed Klaipeda.

As one can imagine, stamp issues for Memel offer a copious number of overprints and surcharges on German and French stamps, as well as a variety of Lithuanian occupation issues. What fun! ;-)

That, of course, was not the end of the history of Memel.

On March 23, 1939, Lithuania was forced by ultimatum to return Memelland to the Third Reich.

At the end of WW II, the lands were returned to Lithuania, but this time as a member of the U.S.S.R. 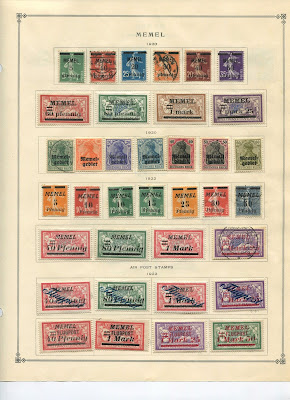 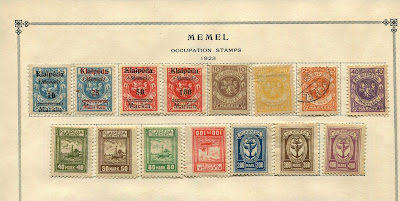 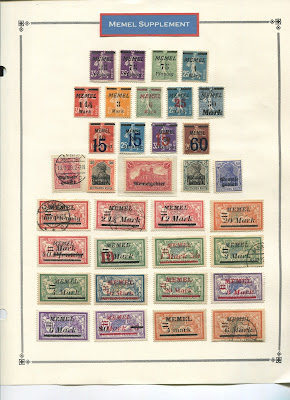 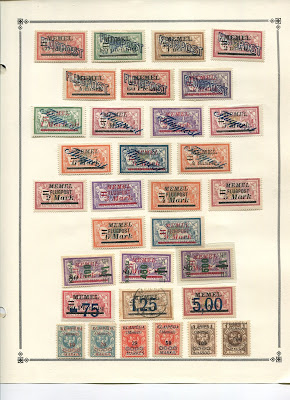 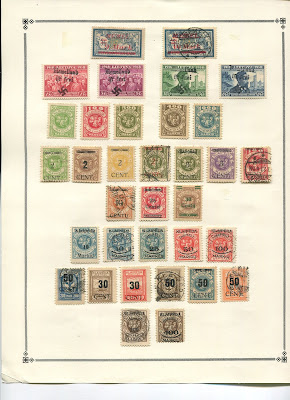