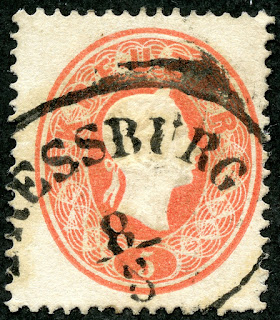 Franz Josef was placed on the 1860-61 five stamp issue, with his profile portrait switched from facing left to facing right.

And then the 1863 issue of five stamps changed the embossed center to the "Coat of Arms".

The embossed technique for stamp printing has never been very common.

Other countries that used this printing method include early Germany, Bavaria, Lubeck, Mecklenburg-Strelitz, Oldenburg, Prussia,Saxony, Schleswig-Holstein, Wurttemberg, early Sardinia and Italy, Heligoland, and Gambia (extensively). That's about it. Can readers think of any other examples?


Newspaper stamps were also used extensively in Austria.  We will also take a look at them in the next section. 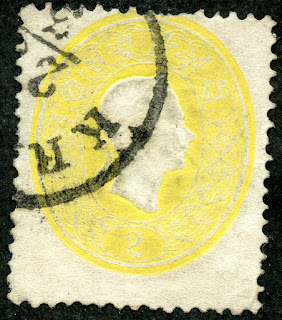 They are perforated 14. Government authorized reprints, intended for collectors, were printed between 1866-1887, but these perfs range from 9 to 13.5.

The bottom denomination, the 2 kreuzer, was printed in yellow.

Let's change tints for a better look at the design. 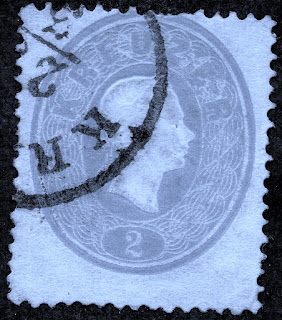 Austria 1860 Scott 12 2kr yellow "Franz Josef"
Cyan tint
The stamp had a fine machine lathe-work design in an oval pattern, with the embossed portrait in the center.

Only a minimalist "Kreuzer" and "2" are inscripted on the stamp. Considering the multiple languages used in the Austrian Monarchy Empire, that was probably necessary. 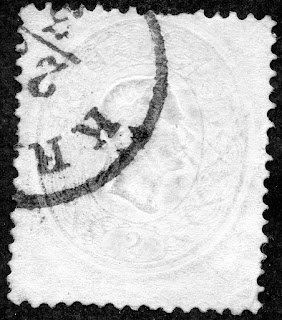 One can argue that this issue, so exquisite and classical, is at the apogee of clean design, and has never been surpassed. !! 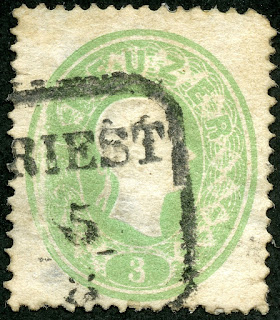 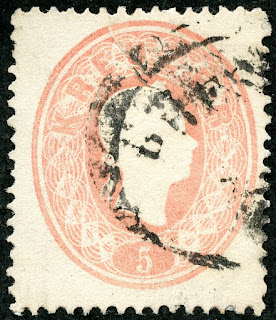 Austria 1860 Scott 14 5kr red "Franz Josef"
Shade
Here is a lighter shade for the 4kr red. The header stamp for this post shows a richer color. The Austria "Netto katalog" parses 2-3 color shades for each denomination of the issue. 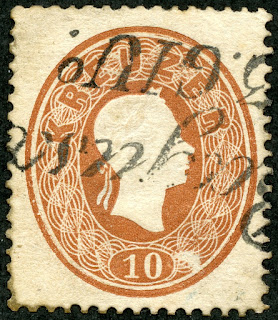 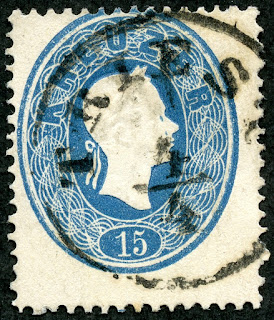 Austria 1860 Scott 15 15kr blue
The Free Imperial City of Trieste was Austria's main port during the 19th century. Collecting postmarks from the wide-ranging Austrian Empire could be an interesting diversion for the WW classical era collector. 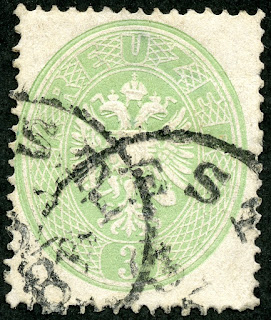 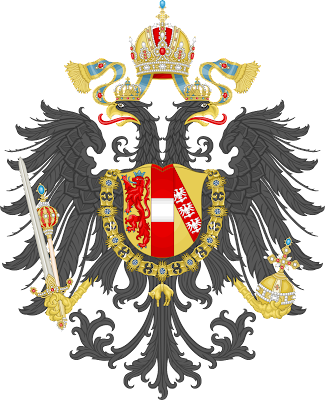 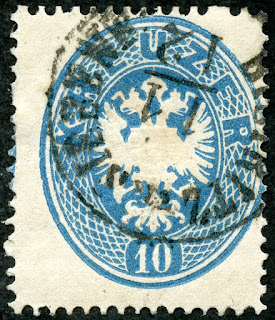 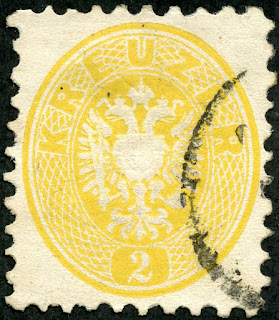 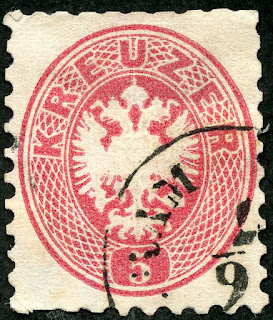 The issue was initially unwatermarked, although for stamps produced after July, 1864, a large BRIEF-MARKEN watermark in the sheet was used. Only some stamps will show a portion of the watermark. (I don't have any.) 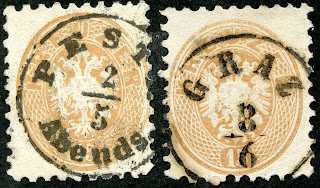 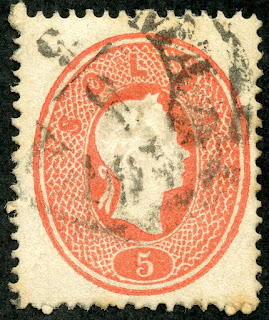 (Of course, recall that Austria lost most of Lombardy (Milan) to Sardinia in July, 1859.)

The perf is 14, while reprints have perfs ranging from 9-13. 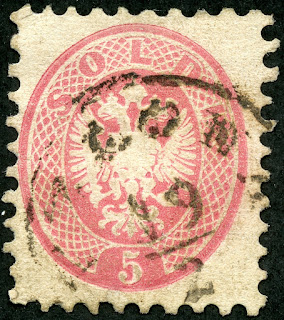 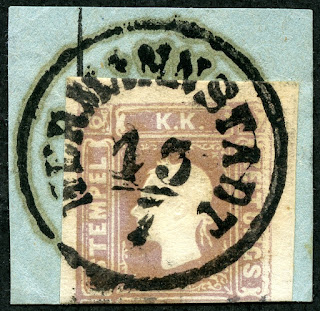 I only have a partially clipped 1859 Newspaper stamp, but interesting nevertheless, as it is still on paper.

The embossed portrait of Franz Josef is the same as the regular 1858-59 Austrian issue, including two types: 1858 type 1 with the loops at the back of the head broken; and 1859 type II, where the loops are closed.

The stamp shown is a Type II (loops closed). 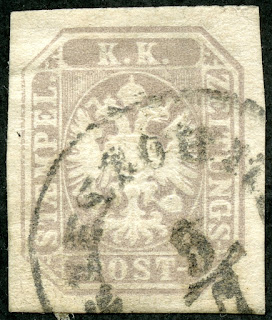 The 1863 Austrian "Coat of Arms" regular issue also had an associated newspaper stamp- the (1.05kr) gray. There are also gray lilac and brownish lilac minor number shades in Scott. 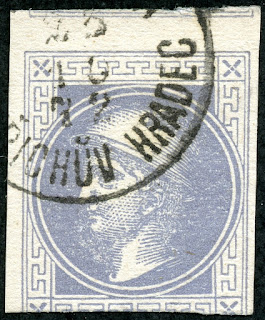 The color is "violet", though Scott has a note that the color shades vary a lot: from gray to lilac brown and deep violet. This stamp looks ultramarine to me. 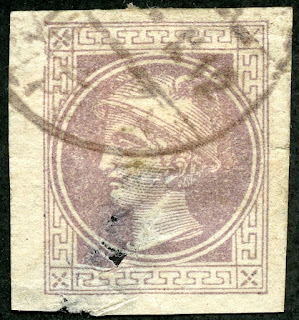 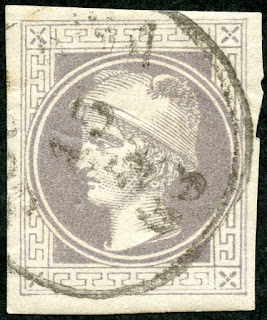 1876 Scott P9Bd (1kr) violet, type II
For Type II, the helmet is clearly defined. There are four thin short discrete lines in front of the wing. 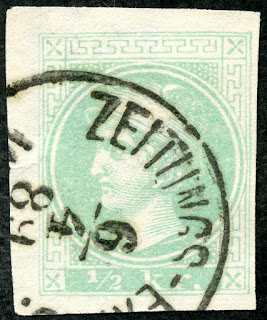 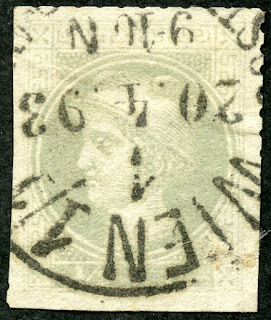 1880 Scott P10a 1/2kr yellow green
Out of the Blue
Austria is one of those countries, where, if one wanted to specialize, there would be a whole "world" to explore! (And it would be helpful to brush up on the German too. ;-)

Note: "Coat of Arms" image appears to be in the public domain.