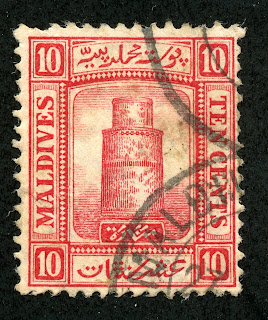 1909 Scott 10 10c carmine
"Minaret of Juma Mosque, near Male"
Quick History
The Maldives archipelago of some 1200 islands (192 inhabited)  is located in the Indian Ocean 400 miles from Ceylon. The atolls are spread out over 35,000 sq miles (90,000 sq km), with an average ground level of 5 feet, the highest point at 8 feet. As one can imagine, tsunamis, and predictions of higher ocean levels are of ongoing concern. 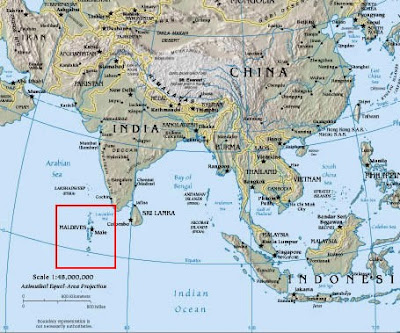 The Maldives
The Maldives were originally explored by the Portuguese in the 15th century, then by the Dutch in the 17th century. But in 1887, the Sultan of the Maldives signed an agreement with the British Ceylon Governor that made the territory a British Protectorate as a dependency of Ceylon, albeit with internal self-government.

The people are ethnically Maldivians, speak a Devehi language, are of the Sunni Islam faith, and comprised about 100,000 people in 1905.

The Capital is Malé.

During the British Protectorate era, which lasted until independence in 1965, the country was ruled internally by Sultans. In 1968, a Republic was established. 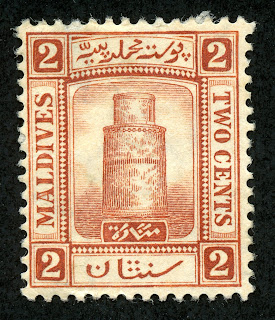 As noted, there is no stamp production for the Maldives themselves until 1906. Otherwise, the stamps of Ceylon must have been used? 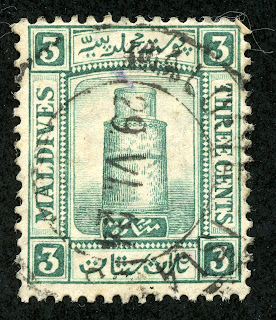 Then, regular stamps of Ceylon were used when the overprint supply was exhausted.. 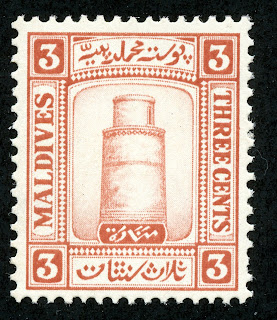 1933 Scott 12 3c yellow brown
Type of 1909 issue Redrawn
The rather classic design from the 1909 issue was used again, but redrawn, in 1933. One will note the lack of background horizontal lines on the vignette tablet compared to the earlier issue. The nine stamp set has a CV of <$1-$10. The watermark consists of "Harrison & Sons, London" in script. 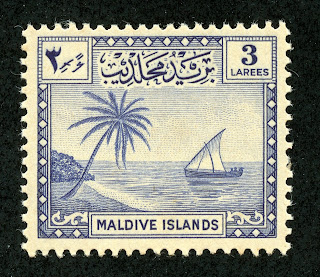 That's it. No other issues. 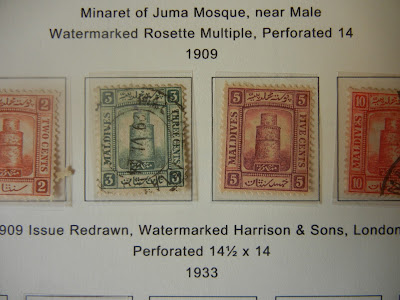 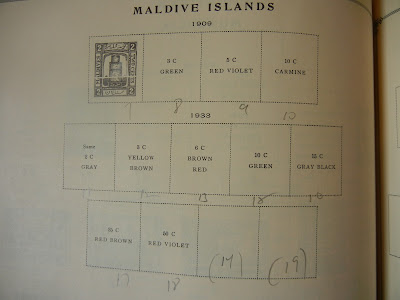 Considering the limited output of the Maldive Islands, BB is rather generous in its coverage. The stamp spaces also include two that cross the $10 threshold. 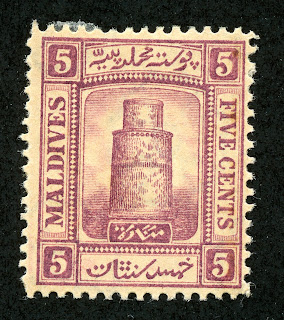 1909 Scott 9 5c red violet
Out of the Blue
The Maldives had  few stamp issues during the classical period.

True, like many small island countries, they more recently have issued myriad topicals, some of which have little relevancy to the Maldives as such.

But the classical era is clean. 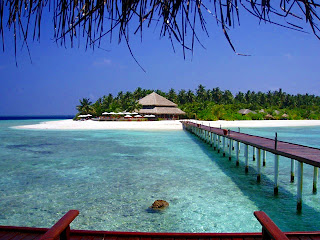 Palm trees and blue lagoons
Posted by Jim at 5:52 PM