Baden - a closer look at the stamps and issues 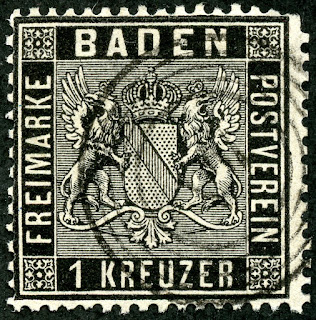 Stamps were first issued on May 1,1851, after Baden joined the German-Austrian Postal Union, and continued until 1868.

For this supplementary post, we will take a closer look at the stamp issues of Baden. 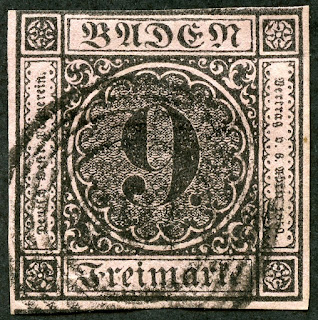 The first issues, which were engraved in Frankfort, remind one of those from Wurttemberg.

The later issues are somewhat similar in design to those of Bavaria.

Interestingly, all the stamps were printed in black, but on different colored paper for each denomination. They consist of 1kr (dark buff), 3kr (yellow), 6kr (yellow green), and 9kr (lilac rose).

The stamps from 1851-1858 have frame-lines with very narrow spacing between stamps. Hence stamps with margins clear of the frame-lines on all four sides are not that common, and are at a premium. 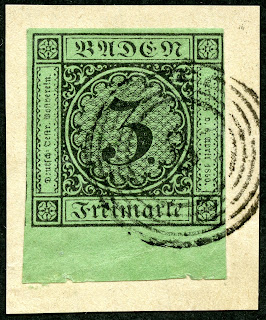 "Freimarke" ("Free- mark") indicates this is a definitive stamp.

1851-1858 Left panel of stamp
The 1851-58 stamp design has, for the left panel, the above script for"Deutsch-Österreichischer-Postverein" (German-Austrian Postal Union). 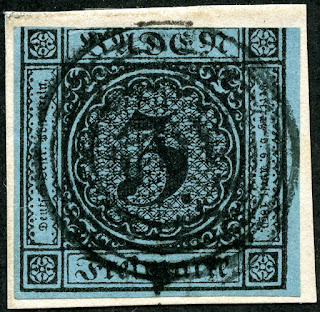 1858 Scott 8 3kr black/blue
Note the five ring postmarks on the 1851-58 stamps? In the center of the cancel is a one to three digit number which indicates which town in Baden the stamp originated from and was cancelled. The numbers are not always legible, as above, but when they are, there may be a premium added to the value of the cancelled stamp depending on the origin. 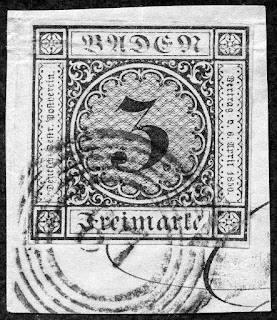 There are ~ 345 different 5-ring numeral postmarks (including different color postmarks) listed in Scott for Baden.

Mannheim does not have an increased value, but many postmarks do - up to $2,500! 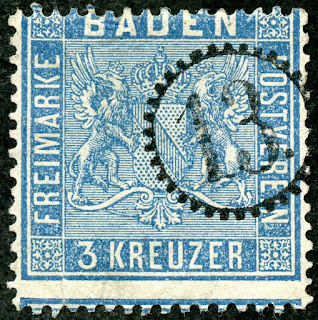 The perforations frequently cut into the design. 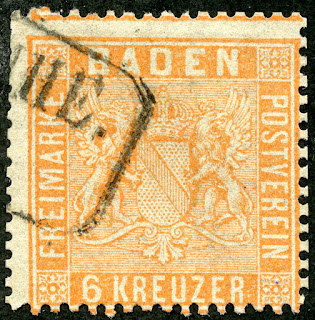 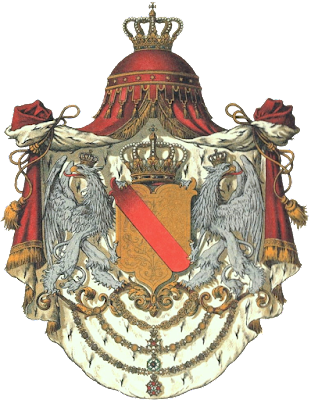 A legendary griffin has the body, tail, and back legs of a lion, the head and wings of an eagle, and eagle's talons as front feet. 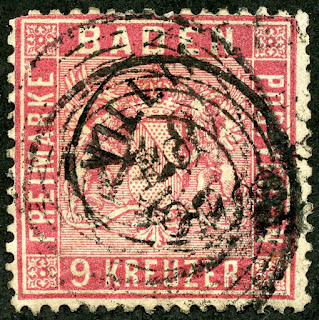 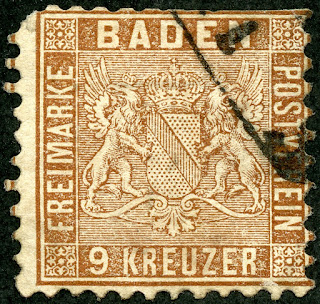 In 1862, a three stamp set of the same preceding design was issued, but in perforation 10. The issue consisted of a 1kr black, a 6kr prussian blue, and a 9kr brown.  (Naturally, there are minor number shades recognized also.) 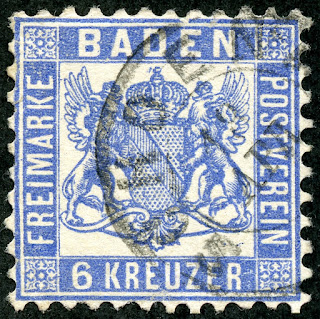 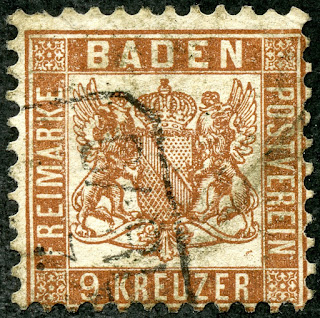 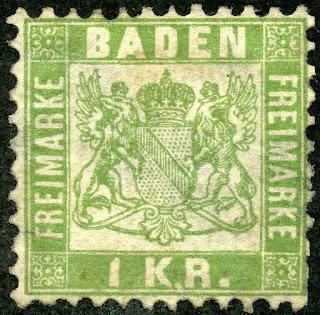 The redrawn issue now has the lower panel scripted as "K.R.", rather than "Kreutzer". 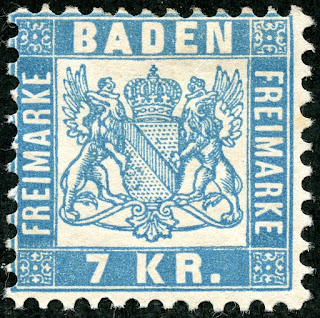 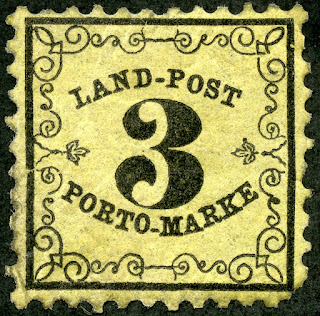 1853-58 Issue in Deep Blue
Types of 1851-52 Issue
Deep Blue (Steiner) has three pages for the stamps of 1851-1868 Baden. All of the Scott major numbers have a space. There is enough room to add some extra copies on the page if one wishes. Otherwise, quadrilled pages should be added for a more in depth study.

1851-52 Scott 2 3kr black/yellow "Numerals"
Out of the Blue
I started my WW collecting in 2011, the same time as I started this blog. Back then, I didn't have many German States stamps; certainly not much Baden. I think my original Baden post reflects that. ;-)

But since then, I have added stamps, as Baden (and German States) collections are fairly available to the WW collector.

I'm pleased to be able to show the Baden issues in greater depth, as I now have some. !!

Note: "Coat of Arms" image appears to be in the public domain.