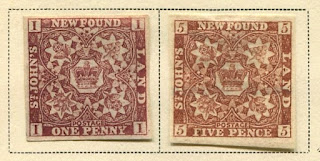 Newfoundland #s 15a violet brown and 19 reddish brown
Bud's Big Blue
Bud's Observations
Because Newfoundland stamps are highly sought after, Big Blue’s Newfoundland spaces are rather difficult to fill. Feeder albums tend to have many blank spaces, especially for the earlier stamps. Filling these blanks individually takes time and luck unless, of course, you resort to forgeries. In earlier years, Newfoundland’s stamps were not given the respect they deserve. But, judging from prices recently realized at on-line auctions, that’s no longer the case. Serious Newfoundland collecting requires a Pentagon-sized budget,

Forgeries make collecting Newfoundland dangerous. Not only are the early stamps forged, often crudely, but bogus copies extend through to the end of Newfoundland’s stamps for the rarer examples. Some of these fakes are expensive. Ed Wener has produced a comprehensive guide to the forgeries, found at: http://www.jacestamps.com/e-books/Newfoundland_Stamps_Fakes_and_Forgeries.pdf. This 36-page essay can be downloaded. Using Wener’s pointers, I’m in the process of evaluating my entire Newfoundland collection. For example, I judge my green three pence triangle to be a genuine #11a. (I’ll post the full results when I’m finished.) Thankfully, #11a is the least expensive of the green triangles. 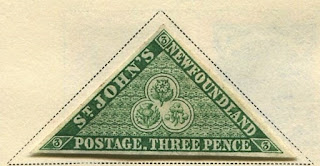 Newfoundland’s variety of youthful Prince of Wales stamps provides and interesting challenge for collectors. Scott assigns seven major numbers to these, plus two minor numbers. But there are only two spaces provided in Big Blue for them. These one cent stamps were intended for mailing newspapers and are often found in “mint” condition but without gum. Actually, they’re used. The post office ordinarily did not cancel stamps on newspapers, so they were easily soaked and sold as mint in the collectors’ market.

41 violet brown, 44 deep green.
Note: these are showing stacked as tip-ins on the supplement page

The first of these (#32, 1868) was designed by the National Bank Note Company (Boston). When the initial supply ran out, replacements were ordered from the American Bank Note Company (New York) which created a new die and used a slightly different color (#32a, 1871). This variety went through several printings, including a rouletted issue (1877). Forgeries by the Spiro brothers and possibly by Oneglia exist, according to Wener, as well as sundry extremely poor efforts, including one in blue. Based on Wener’s descriptions, I think my #s 32 and 32a are genuine.

In 1880 yet another slightly different design was produced -- this by the British American Bank Note Company (Montreal) -- and issued in various shades of brown and green. (See #s 41 through 45, 1880-1897). Wener identifies no forgeries for these, they being perhaps too common to reward a forger’s efforts.

All of these stamps appear to be inspired by a photo of the Prince in a Scottish highland outfit (see it in Bud’s Big Blue New Brunswick post), but there are subtle engraving differences. Sometimes his tartan sash is secured by a broach, sometimes not. Sometimes the feather is on the right side of his cap, sometimes on the left. The tartan pattern, meant to be Royal Stewart and Dress Stewart Saxony, varies from stamp to stamp. Engravers took their liberties, perhaps working from earlier stamps rather than the original photo. I wonder if prince, later King Edward VII, noticed or cared.

Newfoundland stamps are sure to provide collectors with many entertaining hours. See Jim’s three detailed posts (here) (here) and (here).

As mentioned above, I intend to reevaluate all my Newfoundland stamps thanks to Wener’s tutelage. I’m hoping my #s 28a and 31 are both genuine, but we’ll see…. 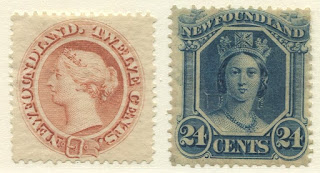 Newfoundland #s 28a pale red brown, 31 blue
Census: 153in BB space, eleven tip-ins, 23 on the supplement pages.
Jim's Observations
Newfoundlanders are self reliant, many making a living through fishing (cod, herring, lobster). But the Depression hit Newfoundland hard, and they ceded self governance back to London in 1934. Yet, the reluctance to join Canada as one of the provinces continued until 1949: and even then, 48% voted no on the referendum.
What that means for the stamp collector is a long run of fascinating issues from 1857-1949 on the topics of native animals and nature, an extractive economy, and royalty!
Newfoundland Blog Post & BB Checklist
Page 1 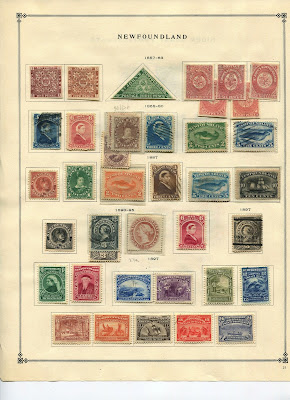 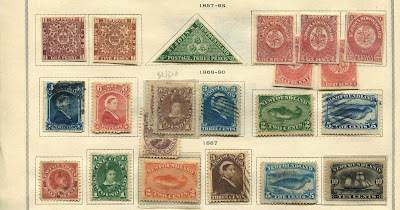 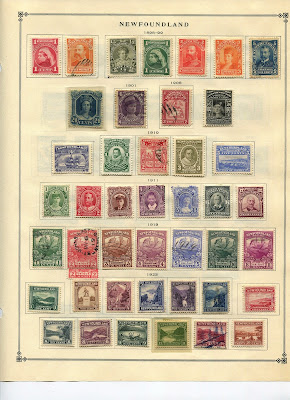 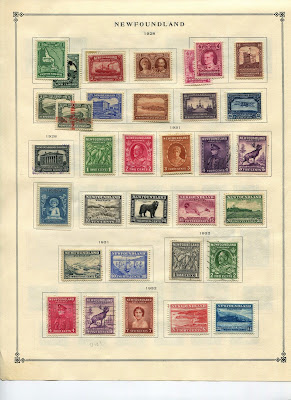 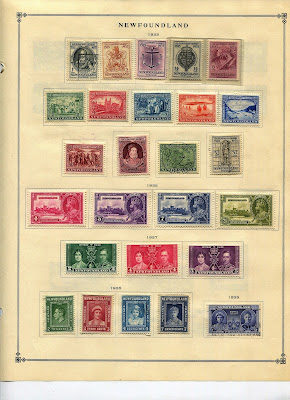 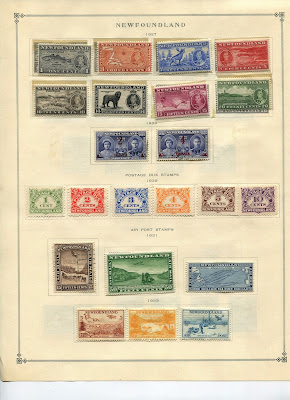 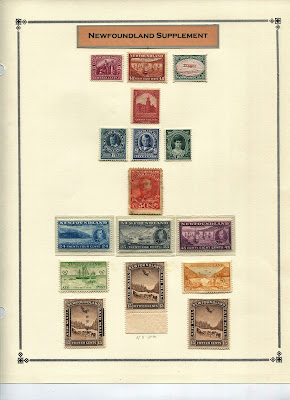