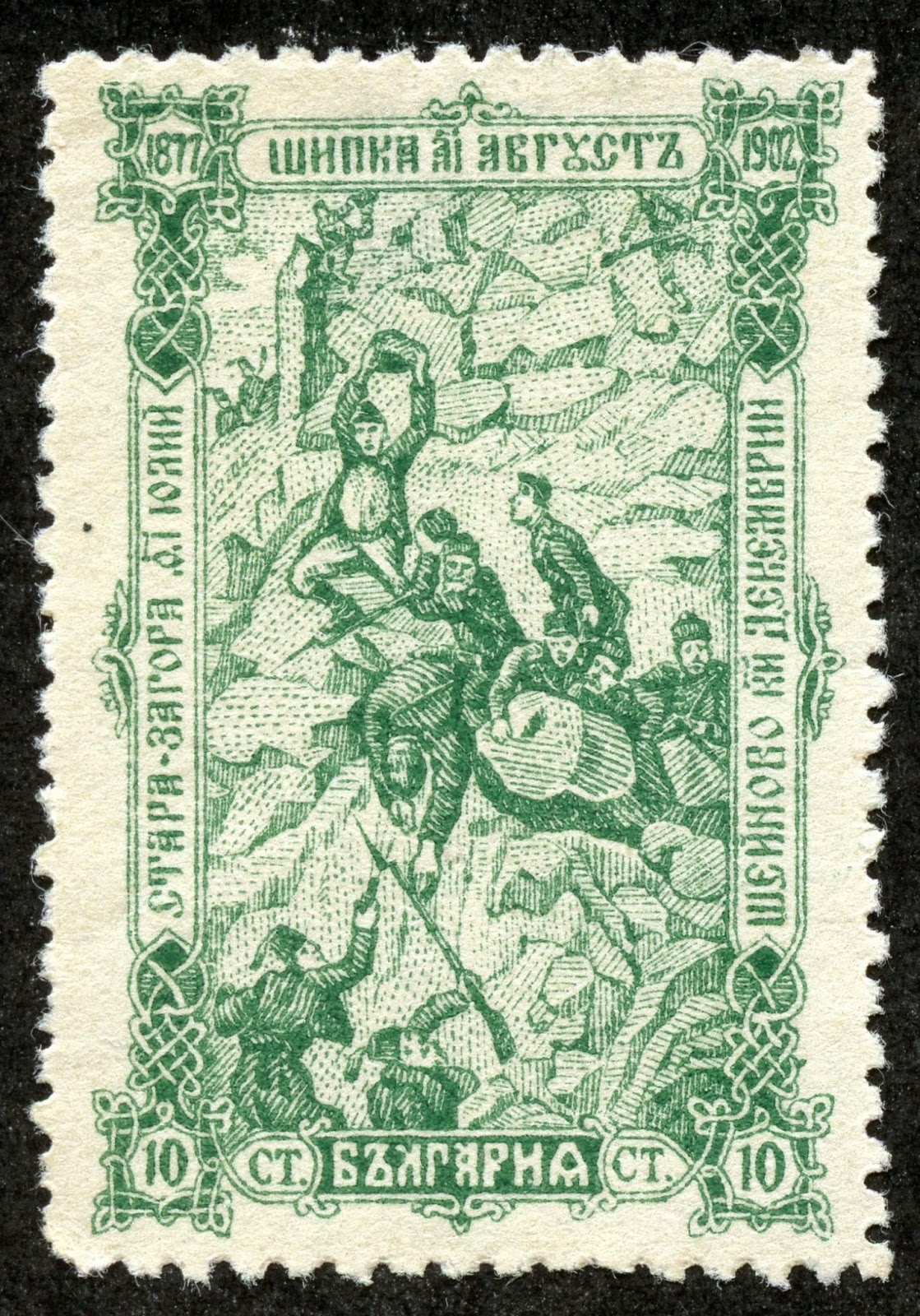 1902 Scott 71 10s blue green "Battle of Shipka Pass", Genuine
Quick History
The 1887 Battle of Shipka Pass is viewed even today as one of the seminal moments in the development of the Bulgarian nation. To commemorate the occasion on the 25th anniversary, a three stamp lithographed set depicting the battle at Eagle's Nest was issued in 1902. 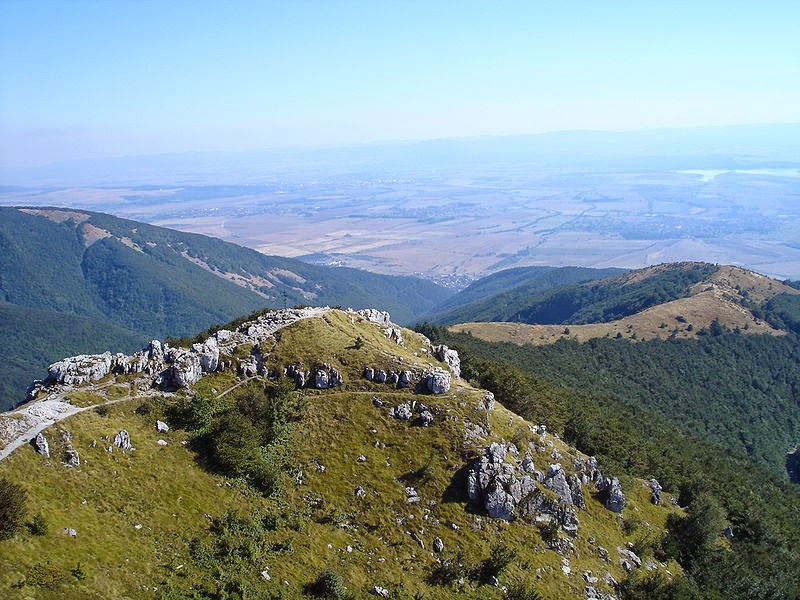 Shipka Pass in the Balkan Mountains
The Battle occurred between the Russian Empire and the Ottoman Empire for control over the important 5000 foot Shipka Pass route through the Balkan Mountains during the 1877-78 Russo- Turkish War. There were a actually four battles between July, 1877 and January, 1878, but the memorialized scene on the stamp issue is for the Second Battle on August 26th between Russian General Stoletov and his 7,500 troops (2,000 Russians, 5,500 Bulgarians), and Suleiman Pasha and his 38,000 Ottomans. 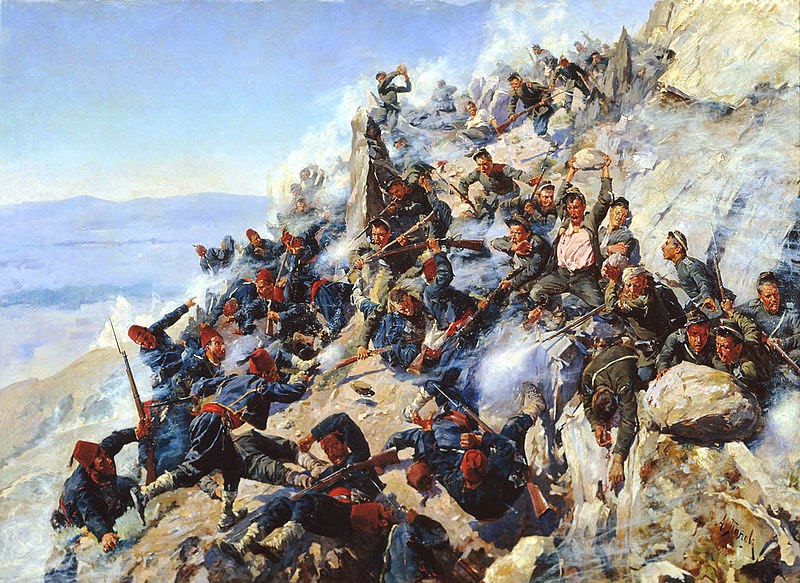 Eagle's Nest Battle Scene: Painting Alexey Popov, 1893
The most dramatic part of the fighting occurred at the Eagle's Nest on St. Nicholas. A Bulgarian bayonet charge was instrumental in repulsing the Ottoman attacks. When the Russians and Bulgarians were out of ammunition, they threw rocks and boulders and even the bodies of their dead fellow soldiers down to thwart the attack. 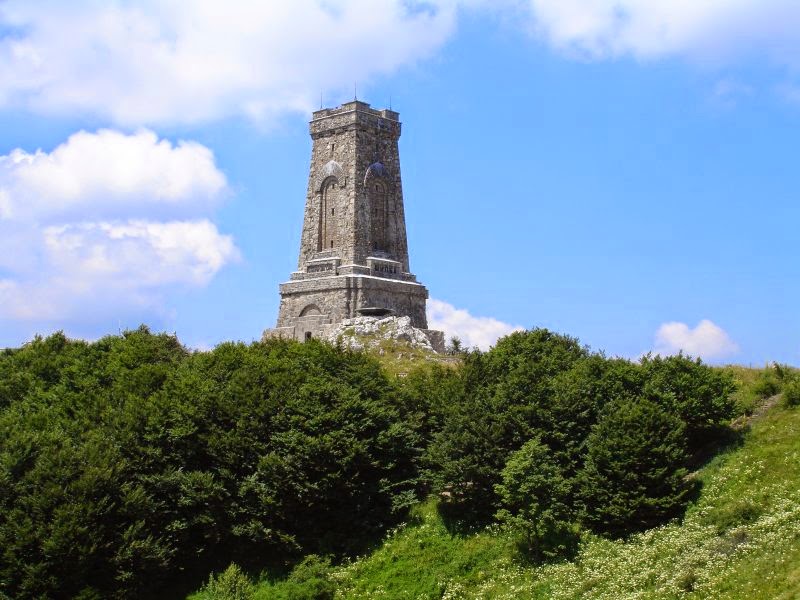 Shipka Monument
The Shipka Pass is now part of Bulgarka Nature Park, and a memorial monument was placed in 1934 to honor those who died there for the liberation of Bulgaria. 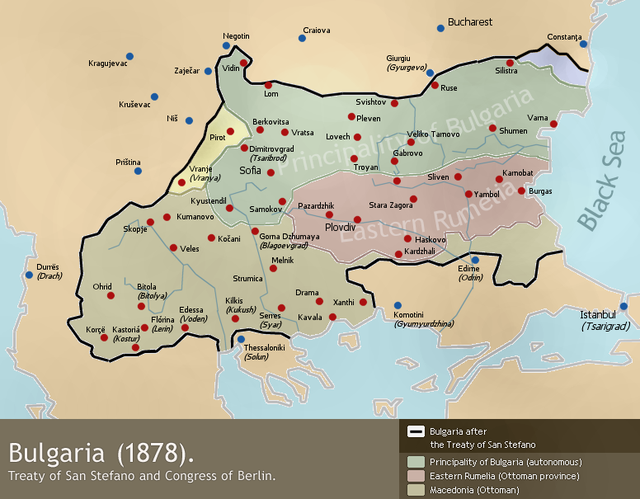 Bulgaria 1878
As a consequence, the Ottomans essentially lost real control of much the territory, and, by the Treaty of San Stefano on March 3, 1878, the Bulgarian state was established.

Now that we have a better understanding of the importance of the Battle of Shipka Pass on Bulgarian identity, let's take a closer look at the 1902 commemorative issue. 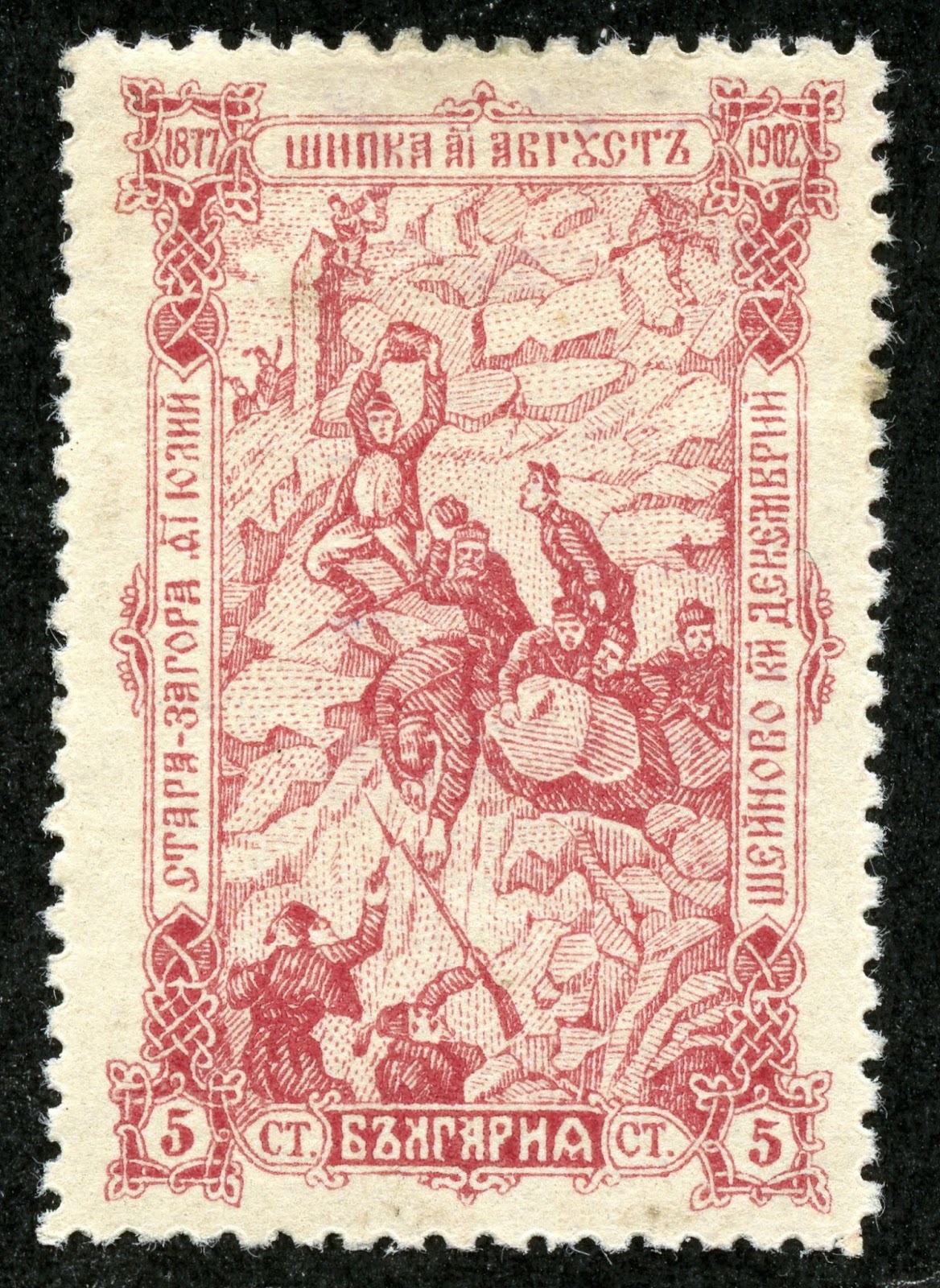 1902 Scott 70 5s lake, Genuine
Into the Deep Blue
The 1902 lithographed three stamp issue- 5s lake, 10s blue green, 15s blue - clearly draws its inspiration from the 1893 painting by Alexy Popov from the Eagle's Nest Battle scene. One can see the Russians and Bulgarians throwing rocks at the Ottoman Turks below. A dead comrade hangs over the rock escarpment.

The brutal nature of 19th century battle fighting is captured by the lithographic drawing- and, perhaps the heroism as well.

I was quite attracted to the issue when I first saw it, and clearly I was not the only one. 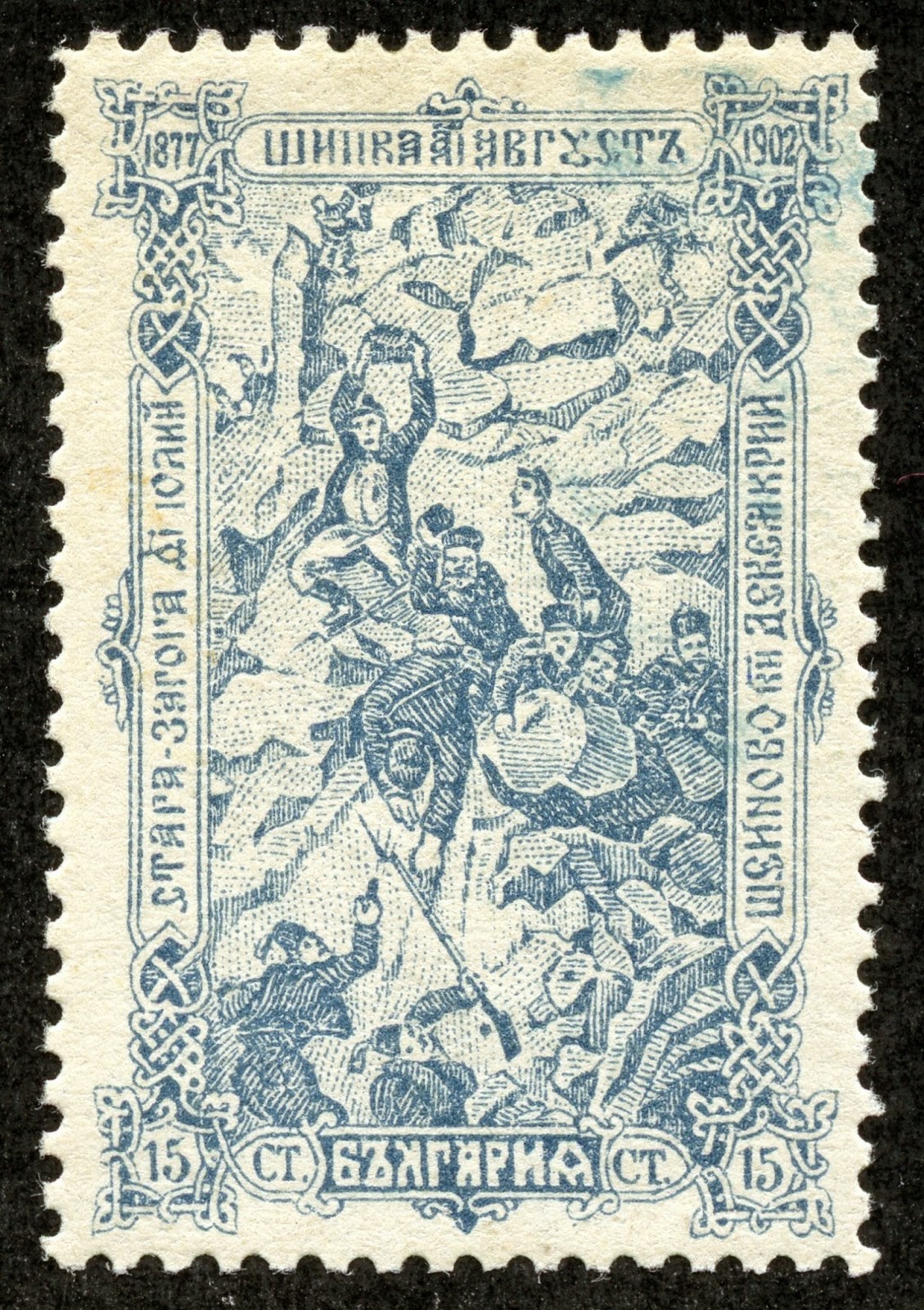 "1902 Scott 72 15s blue"
N. Imperato of Genoa, Italy Forgery
Yes, the forgers saw the attraction also. ! A lithographic stamp is much easier to forge successfully compared to an engraved one.

The most successful forgery- and quite plentiful in the packet trade- was distributed by N. Imperato of Genoa, Italy. From 1920 to 1922, he published a pamphlet "Il Fac-simile" which touted his "reprints" at one-tenth catalog. He was quite able to get his forgeries into the packet trade, as I have seen his stamps scattered in older collections for Batum, Dominican Republic, Honduras, Fiume, Haiti, and Karelia.

Although Spiro, Fournier, and De Sperati are more famous/infamous- perhaps because they produced forgeries of early expensive classical stamps- I can almost guarantee that if one has a general WW classical collection formed, in part, from the packet trade, one will have N. Imperato forgeries in the collection.

To wit: a quick review of several collections revealed the majority of examples of the 1902 Battle of Shipka Pass issue stamps to be N. Imperato forgeries. ;-) 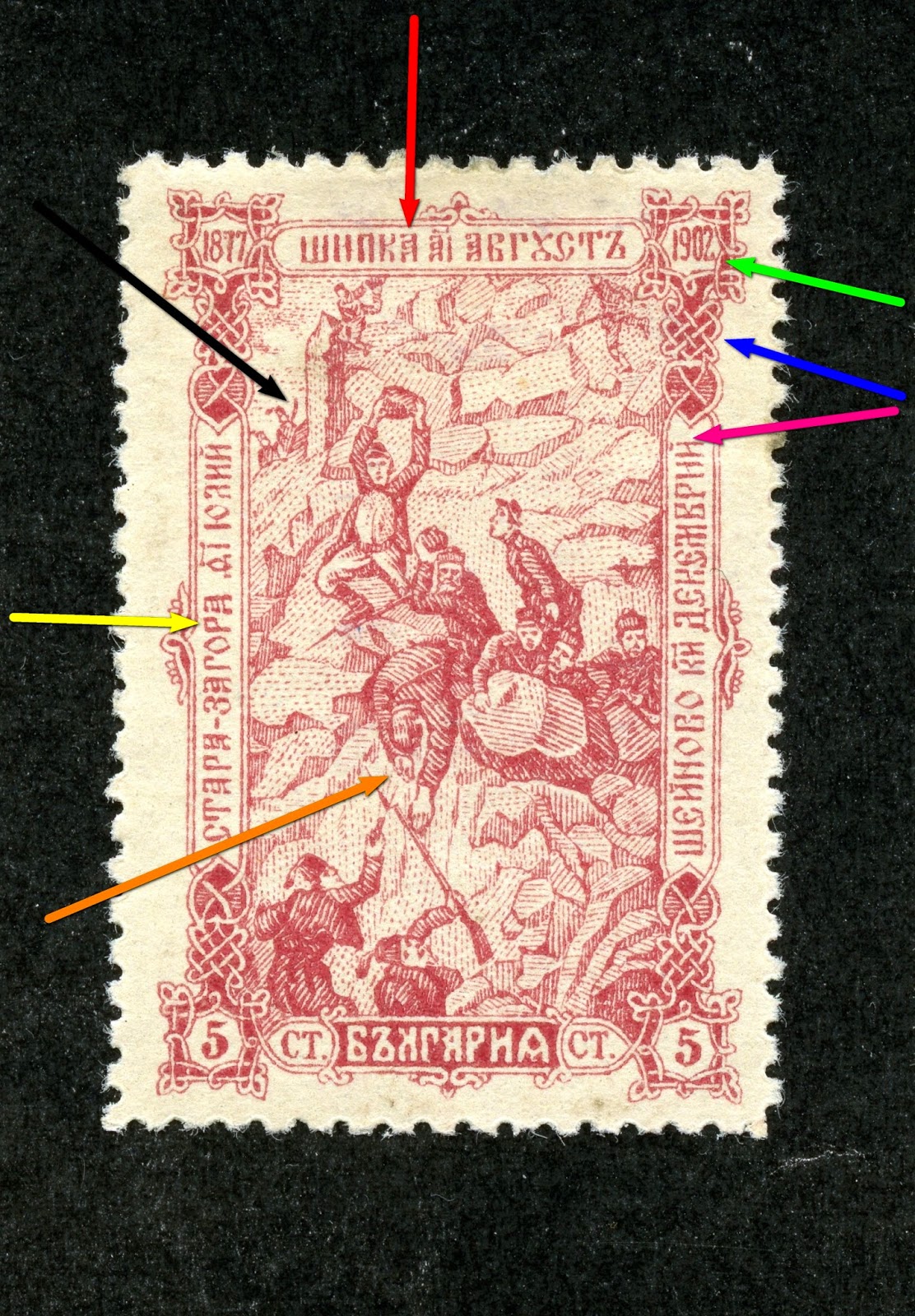 1902 Scott 70 5s lake, Genuine
Arrows point to distinguishing features
One reason the 1902 Shipka Pass N. Imperato forgeries are ubiquitous in collections is that they are quite good! Careful examination is required to separate them out.

But there are differences.

Three "signs" are pointed out by Varro E. Tyler (Focus on Forgeries c2000), and I found four additional "signs". The colored arrows above locate the signs.

For the following close-up scans, refer to the colored arrows above to find the location of the sign. 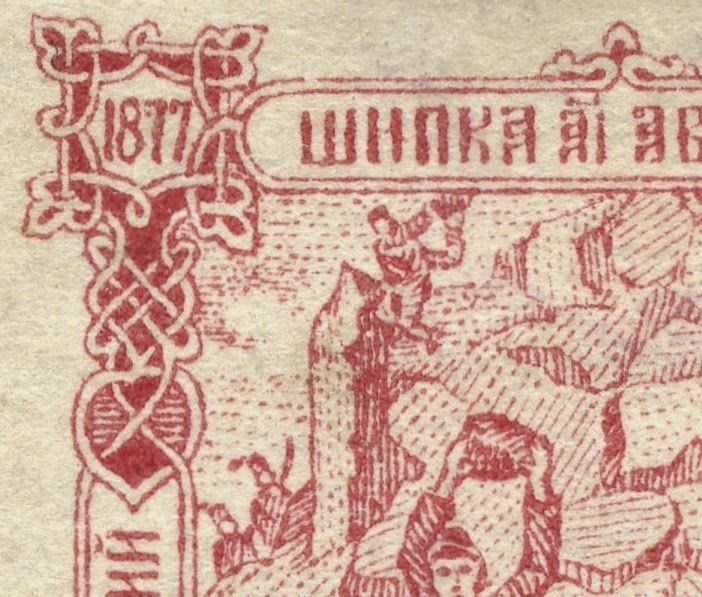 Genuine- Left Upper Section
Genuine
* "a" sign (red arrow)- the upper portion of the fifth character from the left in the horizontal inscription looks like an "a". The top of the "a" is flat. (V. Tyler)

* "Rifle" sign (black arrow)- of the two soldiers seen in the gap of the mountain, the rifle carried by one solder  touches his shoulder. (V. Tyler) 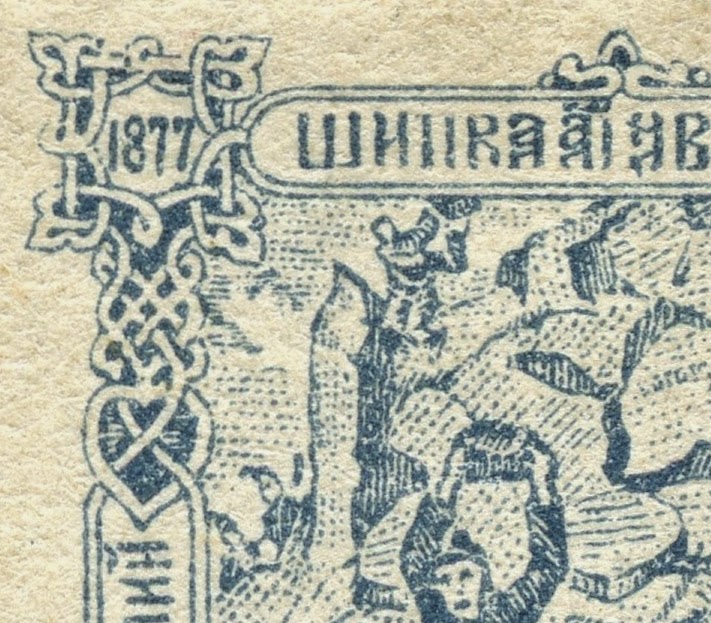 Forgery- Left Upper Section
Forgery
* "a" sign (red arrow)- the upper portion of the fifth character from the left in the horizontal inscription looks like an "a". The top of the "a" is curved. (V. Tyler)

* "Rifle" sign (black arrow)- of the two soldiers seen in the gap of the mountain, the rifle carried by one solder does not touch his shoulder. (V. Tyler) 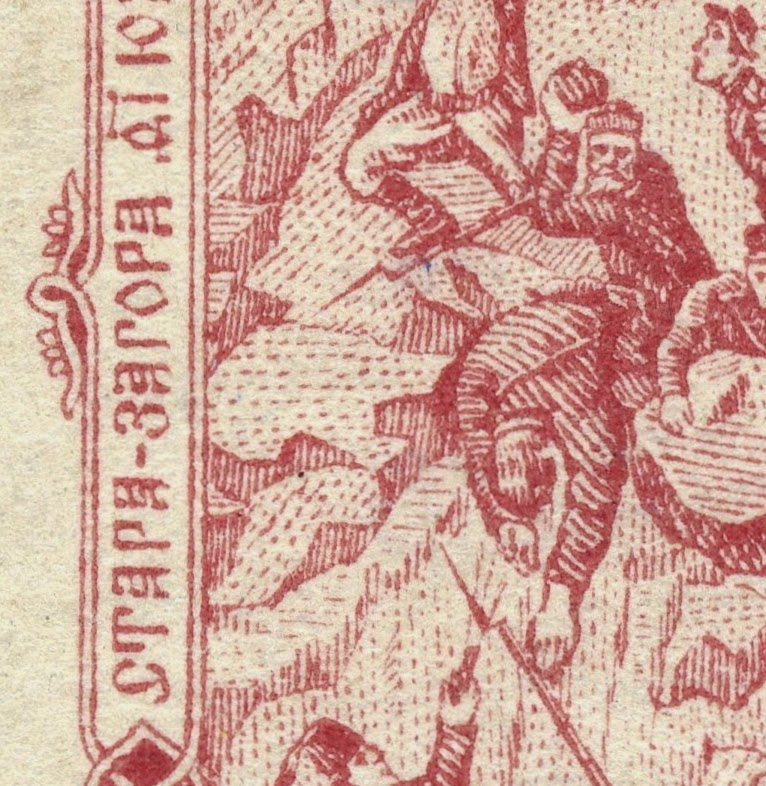 Genuine- Left Central Section
Genuine
* "P" sign (yellow arrow)- the character above the "O" in the vertical inscription looks like a "P".

* "Hand" sign (orange arrow)- although there are two thick internal vertical lines drawn for the right hand of the dead soldier, three distinct fingers are not obvious. 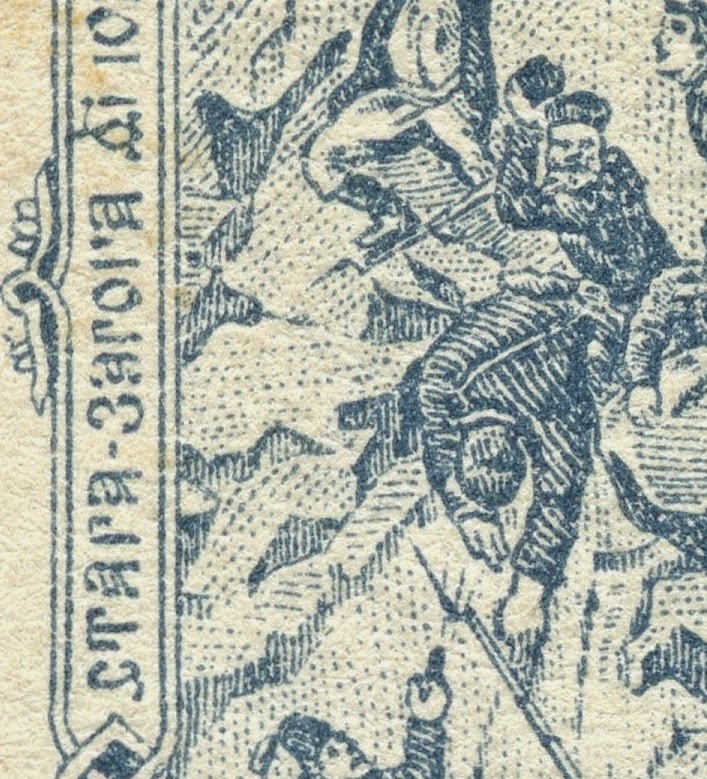 Forgery- Left Central Section
Forgery
* "P" sign (yellow arrow)- the character above the "O" in the vertical inscription looks like a parallel longer line and a shorter line- definitely not like a "P".

Genuine- Right Upper Section
Genuine
* "2" sign (green arrow)- the "2" of "1902"clears the scrollwork (V. Tyler), or just barely touches the scrollwork.  Note: Tyler states the "2" does not touch the scrollwork, but the above example shows it is not always true.

*"Scrollwork" sign (blue arrow)- the scrollwork located in the four corners of the stamp is thin in width.

* "H" sign (Fuchia arrow)- the "H" character at the top end of the script has a detached vertical mark.

Forgery- Right Upper Section
Forgery
* "2" sign (green arrow)- the scrollwork pushes up against the "2", making the foot of the "2" appear  blob-like. (V. Tyler)

*"Scrollwork" sign (blue arrow)- the scrollwork located in the four corners of the stamp is thicker in width.

* "H" sign (Fuchia arrow)- the "H" character at the top end of the script bends vertically at the top of the "H", but is not detached. 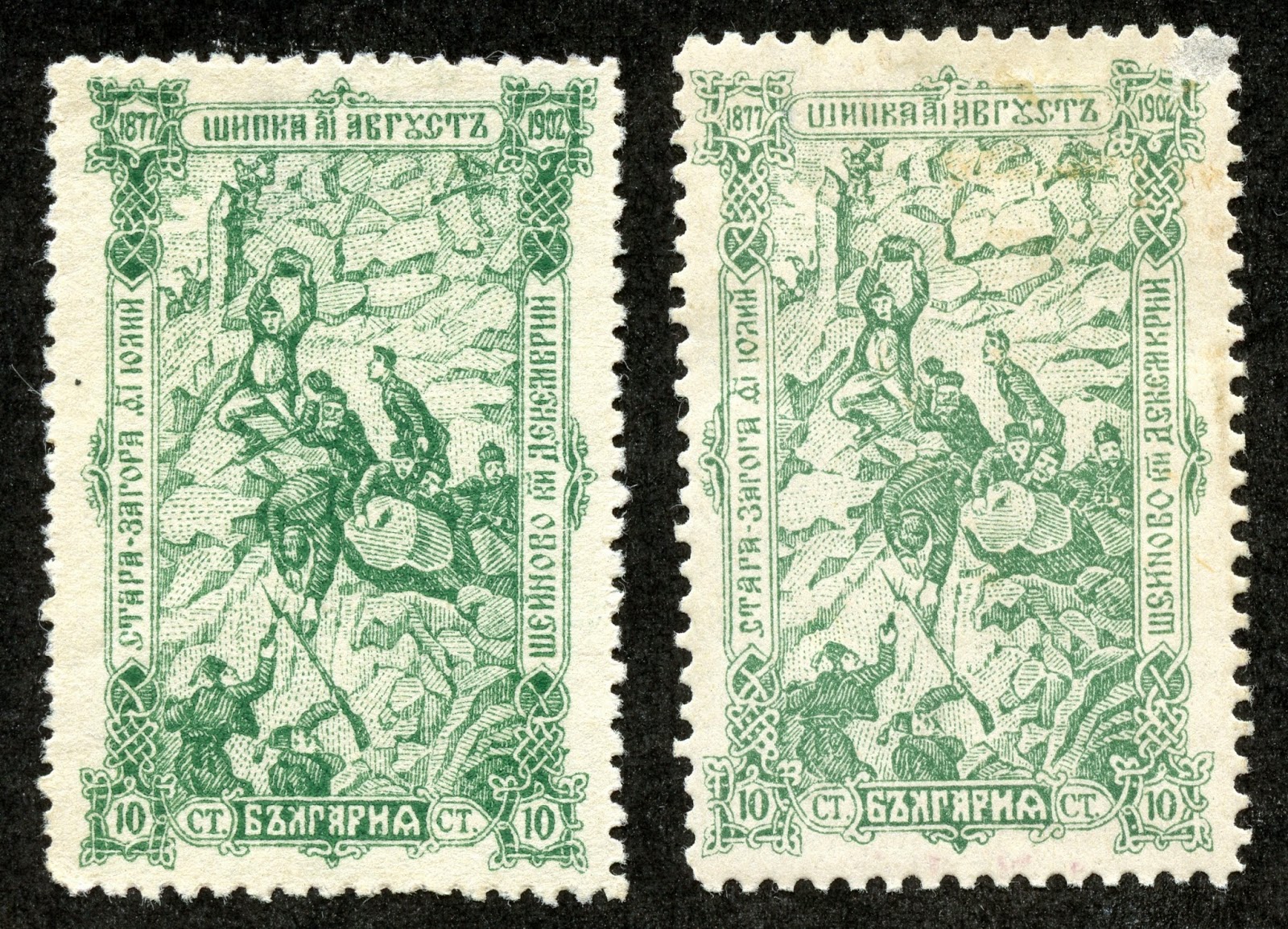 Note: Shipka Pass pics, map, and battle painting appear to be in the public domain.