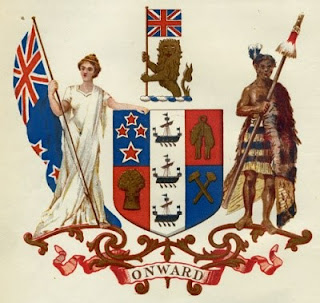 With the high hopes of a kid exploring trunks in grandma’s attic, I rushed to reassess my New Zealands (all scanned, see below). Can you spot the treasure? No?

Well, neither could I.

Interesting stamps, yes. A pile of gold, no.

So, I’ll write about the ordinaries, and nothing in classic New Zealand philately is more ordinary than the lowly Penny Universal postage stamp. Every ragtag album has them, often many of them, some bright carmine, some faded from too much wear. Dealers can’t sell them even for pennies.

The Penny Universal comes in three similar designs and a host of different shades, papers, watermarks and perforations (including tractor feed holes for vending machines). Scott’s catalog lists 15 of these variations while Stanley Gibbons, an ever more meticulous British catalog, counts 105. In addition, Penny Universals were overprinted to make NZ official stamps and commemoratives. Outlying islands – Niue, Samoa, Cook (Rarotonga) – used overprints of Penny Universals. Does anyone have all, or even most, of these? This is serious specialist territory.

There’s even a book about this one stamp’s variations: 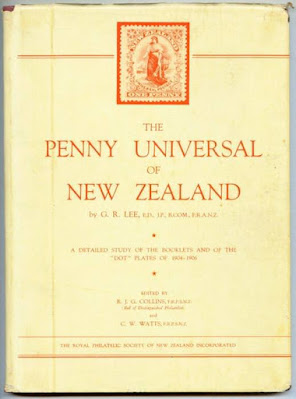 I’ve not yet bought it

Some variations list for over £1500, a small pile of gold. A few are unique, or nearly so, and command even higher prices if/when they’re available. Upon learning this, I got out my magnifying loop and continued to look. I might find variations for which wacky specialists would pay fortunes.

The first Penny Universal was released on New Year’s Day, 1901. It features Zealandia, the female personification of New Zealand. Scott’s catalog lists her as name as Commerce, although many Kiwis beg to differ. She does have a rather different appearance on the 1911 Coat of Arms (top, left) – hair done up, slimmer. Moreover, in the stamp she wields a caduceus, the classic symbol for protectors of thieves, merchants and messengers. So maybe Scott is right.

The second design (1908) differs from the first in that the globe has slanted shading and the waves are not as high on the steamer’s bow. The third design (1909) has “Universal Postage” on a scroll and “Dominion of” inscribed at the top. Inattentive dealers regularly mislabel the three designs 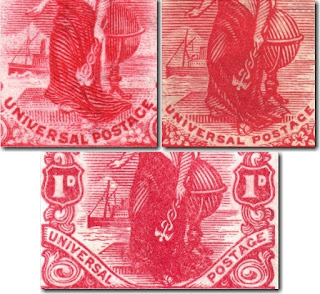 A universal postage rate was a bold idea – one penny to send a message anywhere in the world. The Postmaster General Joseph Ward (later Prime Minister) had hoped the idea would encourage other nations to follow New Zealand’s lead, thereby facilitating better international communication. Few did. They feared loss of revenue if they complied. Some even refused to accept mail with Universal stamps, notably the USA, France, Germany and neighboring Australia. The latter’s refusal must have been a great disappointment to Ward.

New Zealand persisted, however, and in a relatively short time increased sales of stamps more than made up for losses from the rate reduction. The postcard (below), recently added to my collection, provides an interesting example. Franked with Scott #129, it was mailed nine years after the first universal stamp was issued. It travelled for a month and ten days from Blenheim, NZ, to Northampton, England, then on to North Malvern. All for one penny. At the time, the rate for sending a letter from Northampton to Malvern, a distance of 60 miles by train, was one penny. 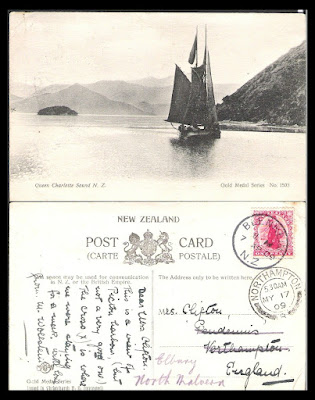 Postcard with a Penny Universal, Scott #129, carmine
Zealandia also makes an appearance on postal-fiscal stamps beginning in 1931. For some reason, Big Blue Part One omits these stamps, but Part Two has a page for them. Postal-fiscals are revenue stamps that can also be used for postage. The 1911 rendition of the coat of arms served as the model for these stamps, the word “onward” being a clue. It’s missing in later revisions. On these stamps, Zealandia is accompanied by a Māori chief. The Māori, an indigenous Polynesian people, arrived in and settled NZ centuries before the Europeans came. 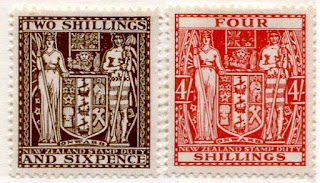 Of course, many valuable NZ stamps precede the Zealandias and I am sorting through them for the promised pile of gold – especially those issued in the 1850s (see supplement page, top line).

In the early years Māori runners carried some of the mail despite frequent conflicts between the Māori and the European settlers. Maybe some of the earlier stamps in our NZ collections came from letters delivered by Māori mailmen. A 1955 centennial commemorative of NZ stamps, Scott #302, features such a runner. I’ve always liked this stamp even though the background seems to seep through the runner’s legs in many examples. Critics have complained that #302 is overly romanticized and that Māori runners often fared rather poorly. A more realistic image can be found online at https://teara.govt.nz/mi/1966/24331/an-early-maori-mail-runner. 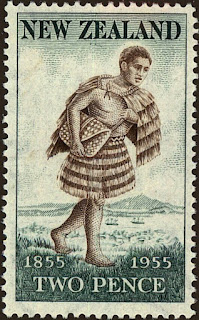 Jim's Observations
Wow! I really enjoyed Bud's comments on the penny universals - a very nice introduction indeed.
Another area of interest for New Zealand would be the Chalon Heads. The "Chalon Head" image of Queen Victoria, based on the portrait of the Queen on her coronation in 1837 by Alfred Chalon, was used from 1855-1873 on the first 50 Scott numbers. Generally expensive, with many variations in perforation, the WW classical collector may need to be content with a few representative stamps. The stamp is either found unwatermarked, or with watermark 6 "Large Star".
New Zealand Blog Post & BB Checklist
Page 1 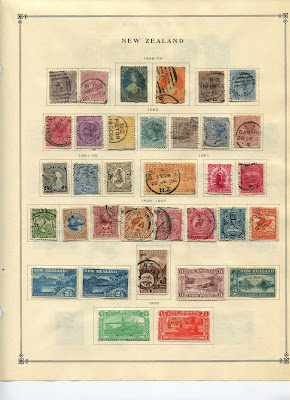 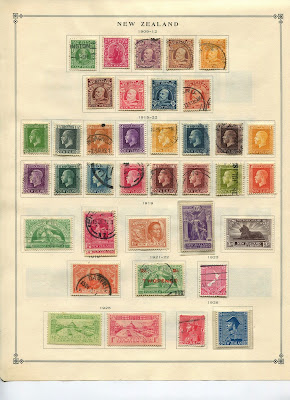 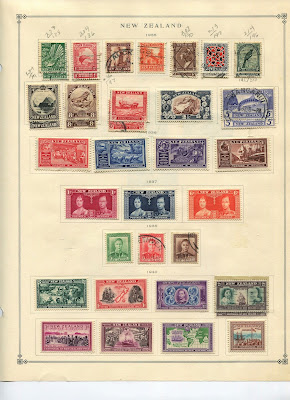 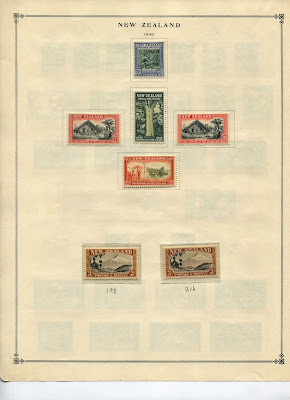 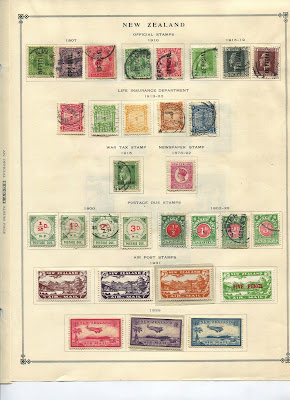 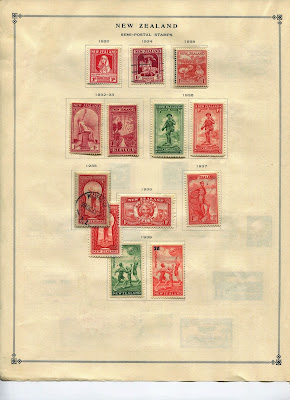 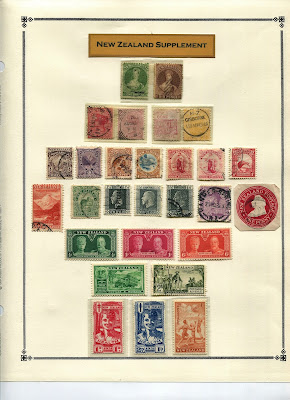 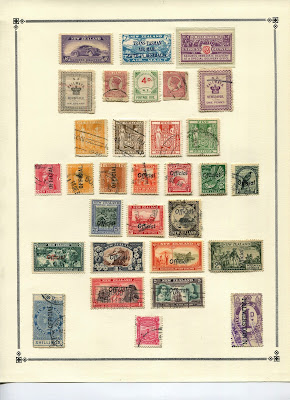 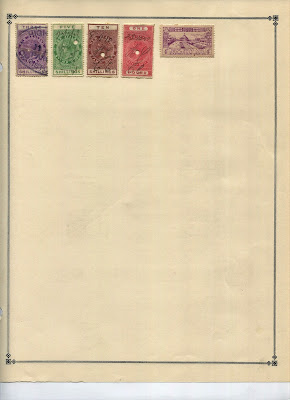