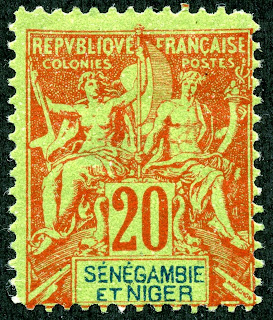 1903 Scott 7 20c red/green "Navigation and Commerce"
A Hirschburger Forgery - for more on these forgeries, click here.
Quick History
Senegambia & Niger was a short lived administrative French possession territory in West Africa between 1902-04, when it was consolidated with a part of (earlier era) French Sudan territory to become Upper Senegal and Niger. (See clarifying note at the end of the blog post.) 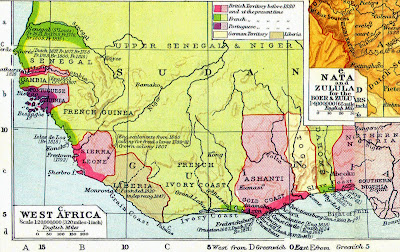 French West Africa
Note "Upper Senegal and Niger", formed from..
"Senegambia & Niger", and parts of (then) French Sudan
Senegambia & Niger territory consisted of the upper basins of the Senegal river and the Niger river and parts east- somewhat ill-defined. The main settlement was Bammako on the Niger. This map shows the successor state (Upper Senegal & Niger), but is easy to read. 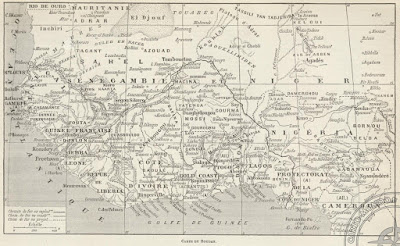 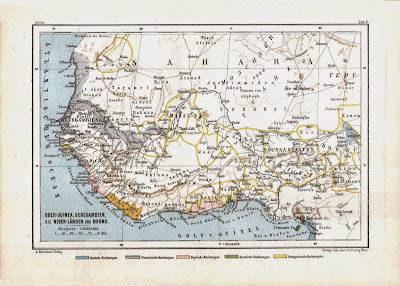 A German map of "French West Africa" territories
Note "Senegambien" for the Senegal and Gambia lands
"Senegambia" was an older term for the Senegal (French) and Gambia (British) lands that the French -especially- hoped to unite under their leadership. That never happened. 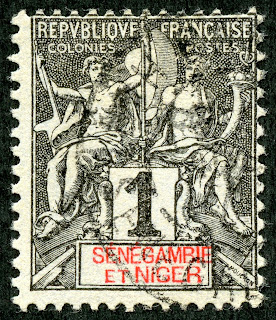 1903 Scott 1 1c black/lilac blue
Into the Deep Blue
The 2014 Scott Classic Specialized 1840-1940 catalogue has, for Senegambia & Niger 1903, thirteen major descriptions for the "Navigation and Commerce" issue. Of those, CV is $2+-$7+ for five stamps. It is possible to have a representative sampling for not too much expense.

A closer look at the stamps
100 Centimes = 1 Franc 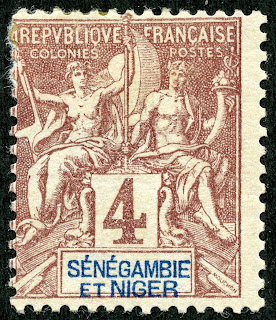 Since this design is found for virtually all of the French possessions, it is quite familiar indeed.

The issue is typographed, and the name of the colony is in either blue or carmine. Perforations are 14 X 13 1/2. Scott has a note that counterfeits can be found with perforation 13 1/2 X 14. 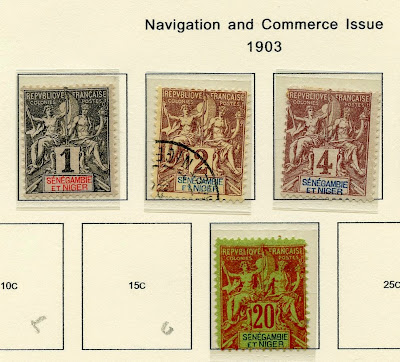 1903 Issue in Deep Blue
Deep Blue (Steiner) has one page for the 1903 issue. Naturally, all the major Scott numbers have a space. 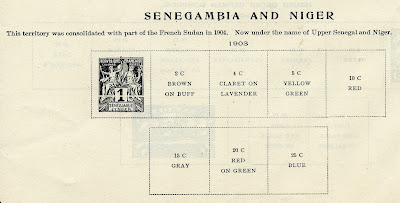 Senegambia & Niger in the '69 edition is located after St. Thomas and Prince Islands, and on the same page as Schleswig and the beginning of the St. Vincent coverage.

The 40s editions have Senegambia & Niger located after Salvador.

All editions have the same coverage. 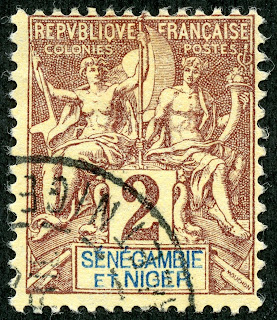 1903 Scott 2 2c brown/buff
Out of the Blue
French West Africa colony boundaries changed often, as they were "administrative" colonies rather than true nation-states. But, at least for Senegambia & Niger, it exists on a map of the period, and had one stamp issue. ;-)

Note: Regarding the formation of Senegambia & Niger: When (earlier era) French Sudan administratively broke up in 1899, the French authorities apparently formed "Upper Senegal" and "Middle Niger" administrative colonies, which issued no stamps of their own, but continued to use (earlier era) French Sudan Stamps. In 1902, the two administrative colonies were combined into Senegambia & Niger. I've been unable to find a map showing these earlier nascent colonies, which, frankly existed more as administrative/military post entities, rather than "real" colonies, as far as I can tell. The French Delegue General (Administrator) was the same for "Haut Senegal et Moyen Niger" (1899-1902) and "Senegambia & Niger" (1902-04). His name was William Merlaud-Ponty, a civilian. (Thanks to Michael Adkins (Dead Countries Stamps website) and Gerben van Gelder (StampWorldHistory website) for digging into this.)

Note: Maps appear to be in the public domain. I would like to thank Michael Adkins and Gerben van Gelder for locating the "Senegambia et Niger" map.