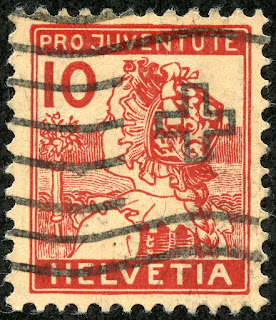 1915 Scott B3 10c red/buff "Girl (Lucerne)"
Quick History
This post will focus on the Switzerland semi-postal stamps. The issues began in 1913, and have been in annual production since 1915. Particularly, these semi-postals have raised funds "For the Children"....Pro Juventute. 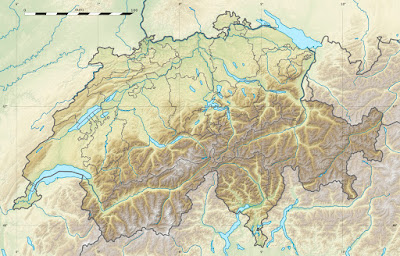 Switzerland
The United States has never released a semi-postal stamp (during the classical era), so the concept of raising funds for a particular purpose through a surtax on stamps is a bit "foreign" for U.S. collectors. (pun intended. ;-)

Scott places semi-postals in the "Back of the Book" section, away from the "regular" issues. This makes them even  more "exotic". ;-)

But semi-postals are quite popular, and many countries use this mode to raise funds. Besides Switzerland, among the countries that have issued semi-postals are Algeria, Austria, Belgium, Czechoslovakia, Danzig, Italy and colonies, France, Germany, Scandinavian countries, Hungary, Latvia, Lithuania, Luxembourg, Monaco, Netherlands, Poland, Spain, Romania, Russia, Saar, San Marino, Tunisia, Turkey, and Yugoslavia.

Those countries that haven't issued semi-postals during the classical era include the British Commonwealth, Latin America, and Portugal and colonies.

Semi-postals tend to be well designed, and usually have a higher CV, because of relative scarcity in issue volume. Hence they are attractive for WW collectors. 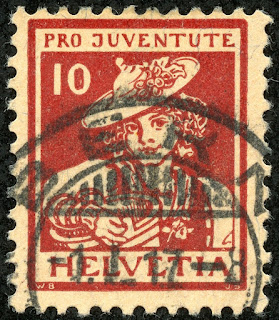 1916 Scott B6 10c brown red/buff "Girl (Vaud)"
Into the Deep Blue
I covered the 2014 Scott catalogue offerings for Switzerland in the prior post. One of the highlights for Switzerland are the semi-postal issues. They deserve their own post, and here it is. !! 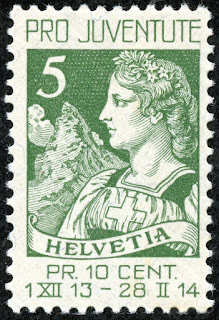 1913 Scott B1 5c green "Helvetia and Matterhorn"
The Switzerland semi-postals are famous for their designs. They must have been avidly collected, because most are inexpensive to moderately expensive. (CV <$1-$8+).  A few of the earlier issues are more expensive (-CV $80+).

All of them during the classical era went on sale on December 1. The first semi-postal- the 1913 "Helvetia and Matterhorn"- appears to have remained on sale until February 28, 1914. 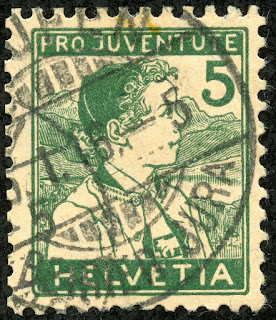 1915 Scott B2 5c green/buff "Boy (Appenzell)"
The 1915 issue has two stamps and is labeled "Pro Juventute", "for the children". Actually, all of the semi-postal stamps shown on this present post are considered Pro Juventute issues.  There were also "Pro Patria" semi-postal issues - "for the country", beginning in 1938. 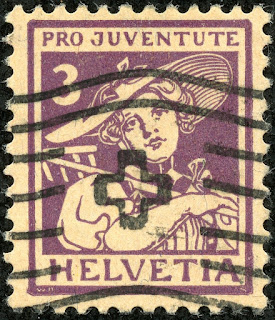 1916 Scott B4 3c violet/buff "Girl (Fribourg)"
Every year beginning in 1916, there was a three or four stamp set released on December 1. I can imagine they were eagerly anticipated. 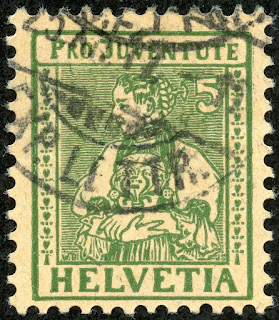 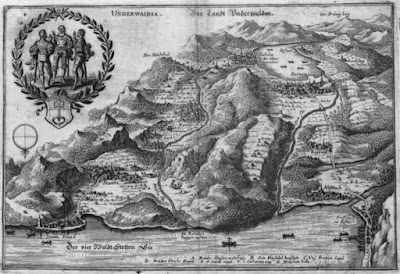 Unterwalden- 1654 Map
Obviously, there were regional dress and costumes in various cantons in Switzerland. Unterwalden is located south of Lake Lucerne. 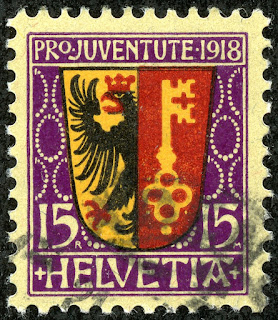 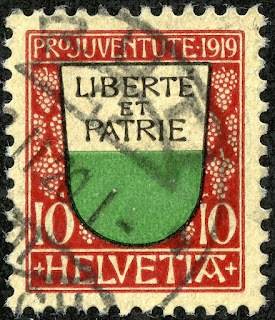 The Canton of Vaud is in the French speaking portion of Switzerland, and the capital is Lausanne. 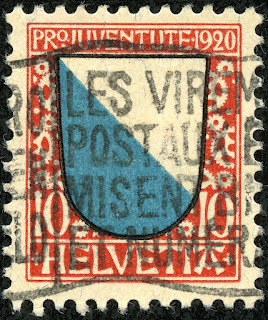 Zurich, located on a lake by the same name, is the largest metropolitan city (1.8 million) in Switzerland. I've visited twice, and a finer city is hard to imagine. 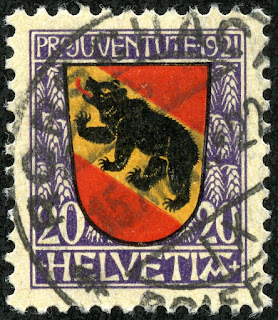 According to local legend, the city was named in 1191 by Berthold V, Duke of Zahringen, after the first animal he found on a hunt, 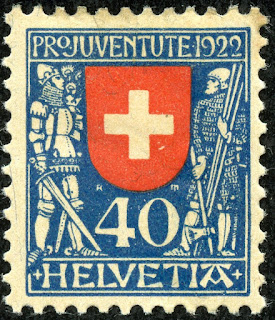 1922 Scott B24 40c blue & red "Switzerland"
The highest denomination of a set often will have the Switzerland coat of arms  design. 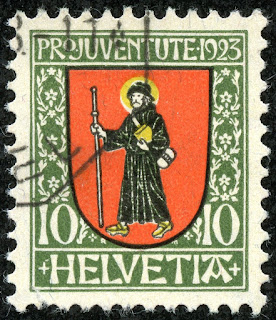 1923 Scott B26 10c mulricolored "Glarus (St. Fridolin)"
The landowner Urso was converted by St. Fridolin, and all the lands that became the Canton of Glarus were left to Fridolin with Urso's death. 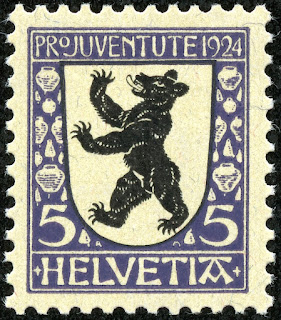 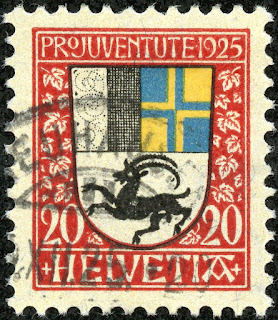 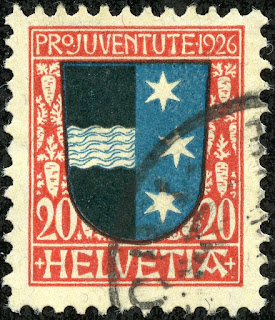 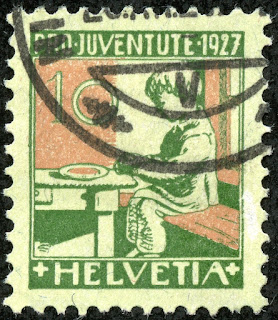 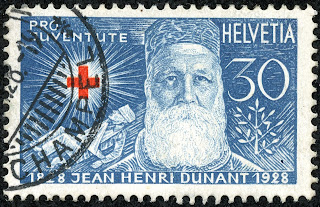 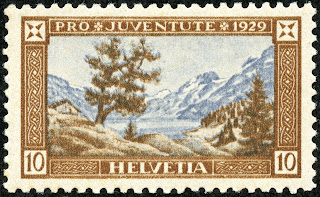 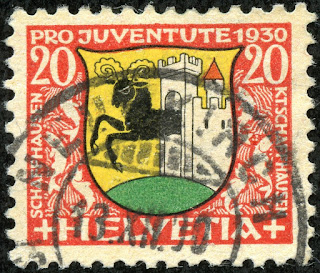 Schaffhausen is the most northern canton, and was a city-state since the middle ages.

1929-30 Air Post in Deep Blue
Deep Blue ("the Steiner") is great if one wishes to collect using the modern Scott catalogue, as it follows the catalogue sequence exactly for Switzerland. 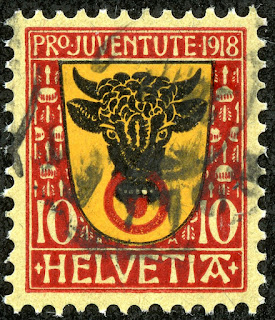 1918 Scott B10 10c red, orange, and black "Uri"
Straw Surfaced Paper
Big Blue
I covered the Big Blue album offerings in the first Switzerland post.  Suffice to say that the early era semi-postal spacing is quite generous for a representational album. !!! 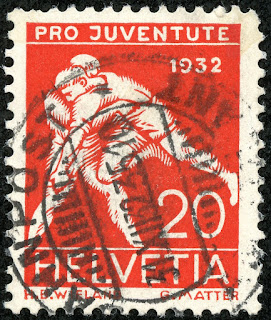 1932 Scott B63 20c scarlet "Wrestling"
Out of the Blue
Switzerland has continued with yearly semi-postals up to the present. They would make a very nice subset collection indeed. !!!