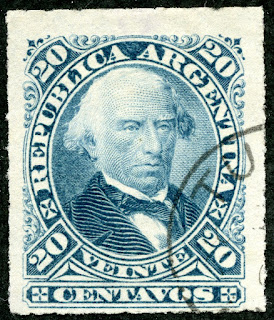 1878 Scott 36 20c blue, Rouletted
"Dalmacio Velez Sarsfield"
Into the Deep Blue
One of the rewards of completing a six year survey of the 1840-1940 A-Z countries, is that now I can, at my discretion, go back to earlier posts, and expand on the stamp coverage.

Argentina has wonderful stamps, and I will enjoy spending more time with them. The original Argentina post is here.

For the last post, I looked at the watermarking that is needed for Argentina, if one wishes to correctly identify issues. This post will look at, in greater detail, the Argentinian stamps issued between 1858-1892. The next post will continue the Argentinian theme, and review issues between 1899-1939.

For this post and the next, I will ignore the issues where watermarking is needed, as those issues were covered earlier..

The 1858-1892 stamp era for Argentina requires very little watermarking, so most of the issues are available for discussion. But, even with selecting for a smaller period, I will only have the time to cover and highlight certain issues and stamps.

One of the joys of South America in general, and Argentina in particular, are the modest CVs of the classical era stamps.

I've always been tempted to sub-specialize in South American countries as a WW collector, because of the modest costs, and the philatelic challenges. Perhaps I will at some point! 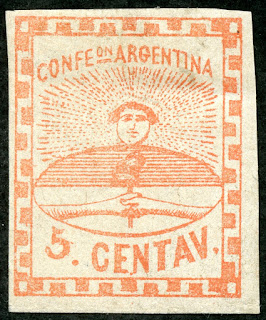 The first stamp of the Argentine Confederation was the 1858 5 centavo red, part of a three stamp lithographic set. A large cache of unused copies of Buenos Aires post office remainders were sold to dealers in 1890. That is one reason that unused specimens for the set are only CV $1+-$10+ some 160 years after issuance.

The other reason is the many fakes, at least four by Fournier, Spiro Brothers and others, have depressed the prices.

Characteristics of the genuine (which this appears to be) are a left serif extension to the bottom of the "N" of "CENTAV."; the patterns of both side borders are the same, beginning with a down stroke to the right, and the mouth line curves a bit downward on the right. 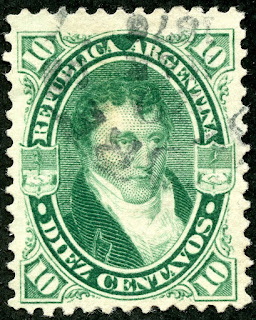 .
1867 Scott 18A 10c green "Manuel Belgrano"
Perf 12; Groundwork of Horizontal lines
The stamps of Argentina between 1864-1882 were engraved, so they are rather striking in appearance, and forgeries (although they exist) are less of a problem.

The 1867-68 10c green "Belgrano" was part of a three stamp portrait issue, along with Bernardino Rivadavia and Jose de San Martin.

The stamp is characterized in Scott as having horizontal lines groundwork, but I do see some diagonal lines also.

There was, in fact, a lithographic forgery produced by the Spiro Brothers of Hamburg, Germany. The genuine has the three "A's" with pointed tips in the upper inscription, while the Spiro forgery has all flat topped "A's". 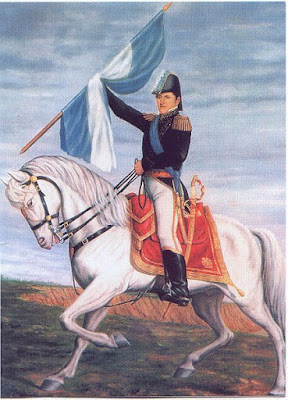 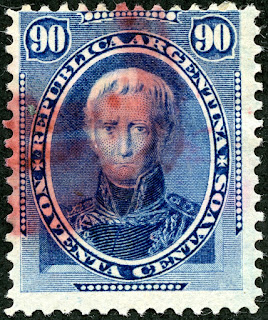 Cornelio Saavedra was a military officer and patriot who played a large part in Argentina's first step toward independence form Spain, the May 1810 Revolution. 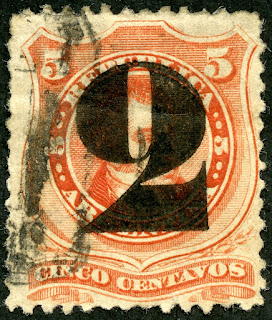 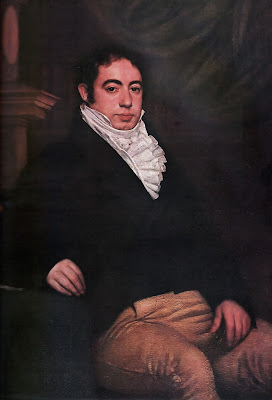 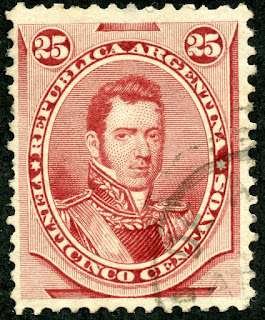 Carlos Maria de Alvear, as General of the army besieging Montevideo, forced the surrender of the Spanish troops in 1814. 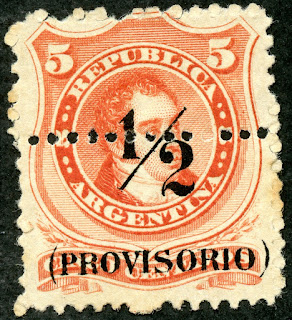 1882 Scott 42 1/2c on 5c vermilion "Rivadavia"
Small "P" and Narrow "V" in "Provisorio"
Perforated across Middle of Stamp
The 1867 Rivadavia stamp was surcharged in 1882 as a provisional issue. There exists two types of surcharge: large "P"/wide "V" vs small "P"/narrow "V". The small "P"/narrow"V" stamp was further perforated across the middle of the stamp, and is illustrated here. 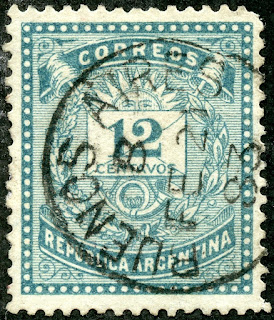 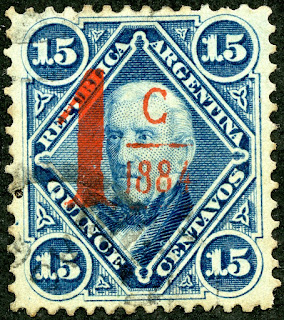 Of interest, the underlying engraved crossed lines type originally issued in 1867-68 was forged lithographically by the Hamburg Spiro Brothers.

In the genuine, for the "ARGENTINA" inscription, the "AR" lower serifs touch, while the "NTIN" upper serifs touch. For the crude forgery, all the letters are separate. 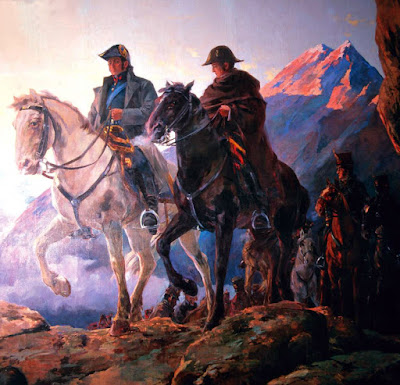 Generals San Martin and  Chilean Bernardo O'Higgins crossing the Andes
Jose de San Martin was an Argentine general and the prime mover for independence from the Spanish Empire in South America.

One of the major feats was crossing the Andes with 4000 soldiers to liberate Chile from the Spanish in January, 1817. 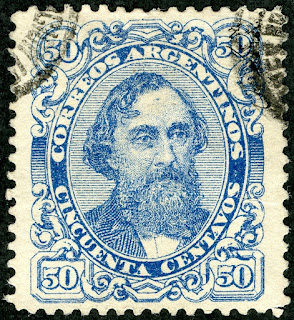 1888-90 Scott 67 50c blue "Bartolome Mitre"
1888-90 Lithographic Issue
Between 1888-90, a large thirteen stamp lithographic portrait issue was released. Scott has a note that there are several varieties of each value, depending on the relative position of the head to the frame. 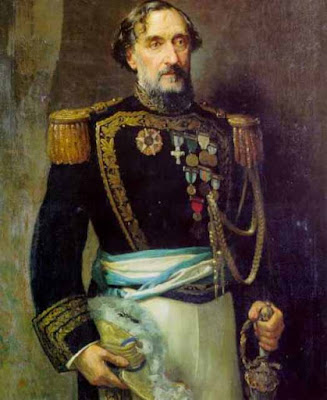 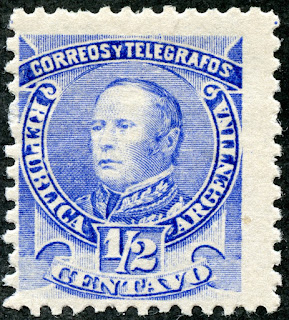 You may have noted that the stamp above is labeled as released in 1888-89. Other Argentine stamp issues in Scott are similarly vague about a specific year date for release. Usually Scott, if they give a year date range for release of an issue, will give the specific release year date of each stamp as it is listed. But not for Argentina- perhaps the date release records for individual stamps were not kept? I think that is unlikely, and a specialized Argentinian catalogue would have this information.

Justo Jose de Urquiza y Garcia was an Argentine general, and president of the Argentine Confederation from 1854 to 1860. 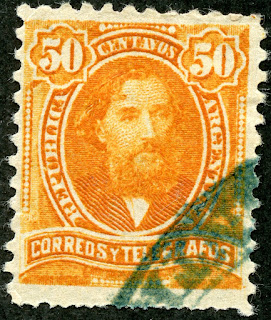 1890 Scott 81 50c orange "Mitre"
Engraved
In 1890, a nine stamp engraved portrait issue was released. I show the entire issue under the "Deep Blue" section of this post. 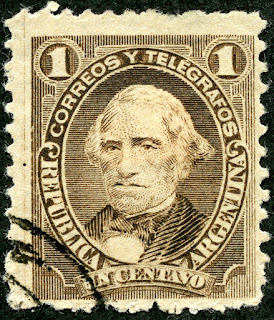 Since they are both about the same CV (<$1), it is equally likely they will show up in a collection. Why doesn't the reader check their own collection and see which one (or both?) they have. :-)

Dalmacio Velez Sarsfield was an Argentine lawyer who wrote the Argentine Civil Code of 1869, and this code remained in force until 1915.

If one does an internet search however, the most likely result will feature the Buenos Aires football (soccer) sports club, Velez Sarsfield. This First Division football team was named after a nearby railway station, which bears his name. 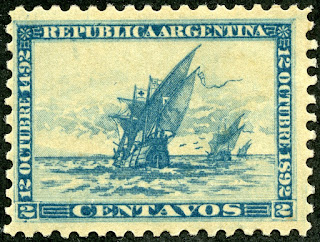 An engraved two stamp set was issued in 1892 for Columbus and the 400th anniversary discovery of America.

I must admit I am taken with the design of this issue. I think it is better than most of the U.S. 1893 Columbian Exposition Issue stamps.

There are lithographic forgeries that are abundant. The engraved set has a small but distinct accent over the "U" of "REPUBLICA" (enlarge to see). The forgeries lack this accent. The genuines have the bottom serifs of the two "A's" in the upper inscription touch each other. 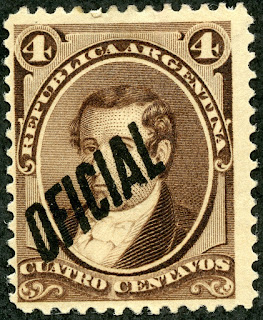 1884-87 Scott O5 4c brown "Mariano Moreno"
On 1873 Regular issue, Overprinted in Black
Argentina has a long history of "Official" and "Official Department" issues. All of them are overprints on regular issues.

The first "Official" issue, with diagonal overprint,  was released between 1884-87, and there are fourteen stamps from the regular category overprinted in black. These stamps are Perf 12 or 14, but there were nine additional stamps released 1884-85, either rouletted, and/or overprinted diagonally in red. The diagonal overprint can either be found reading upwards or downwards.

Mariano Moreno was a lawyer, journalist, and politician that played an important role in the first national government of Argentina (Primera Junta), after the May 1810 Revolution. 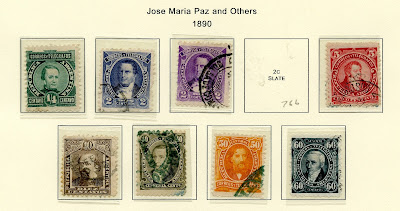 1890 Issue in Deep Blue
Deep Blue (Steiner)  has nine pages for the stamps issued from 1858-1892. All of the major numbers in Scott have a designated space. 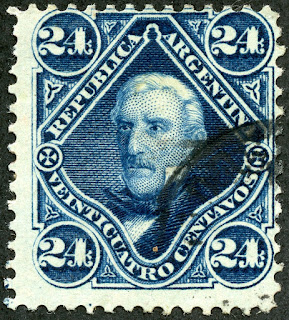 Out of the Blue
I now know a bit more about Argentine history, based on their classical 19th century stamps.

Note: The portrait paintings image scans appear to be in the public domain.