The Big Blue Checklist-How it is done 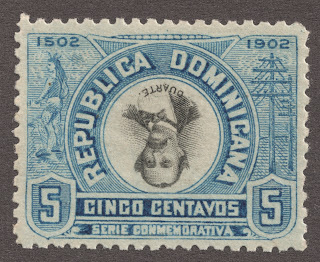 Dominican Republic Scott 146a 5c blue & black
"Juan Pablo Duarte"
I've had some questions from readers on the intent of the checklist, how it is done, and what is the difference between the annotated (Aden-Ethiopia) checklist, and the present "simple" (Falkland Islands-Latvia) checklist.

So this is a blog about the "nuts and bolts" of creating a checklist, and the decision process that goes into this effort.

So did Big Blue simply choose 35,000 discrete stamps, and leave out categorically the other 65,000?

Yes, clearly, in many cases stamps were left out ( high denomination, high expense, or for no good reason), or whole sections or countries were left out. After all, there are only 35,000 spaces, so choices had to be made. ;-)

But Big Blue, by listing dates for stamp spaces, color descriptions for stamp spaces, or an illustration in a stamp space, may admit more than one stamp for a space. (Or may exclude some perfectly good stamps that probably should have been given a shot at a space.)

Consequently, there are really more than 35,000 stamps eligible for a space.

So how does one determine which stamp(s) are eligible for a particular space?

Again, the three important variables are date specification, color specification, and illustration specification. Let's look at each one. (There is a fourth variable-denomination- but there is nothing to say about that-just put in the correct denomination for the space.)

Inclusive Date (example 1900-1905)
For an inclusive date criteria, if a stamp falls within that parameter, and it is eligible otherwise, in it goes into the checklist. ;-)
No problem there.

What about an otherwise eligible stamp that was issued in 1908, or a whole issue (perhaps only varying by watermark) that was produced in 1907-1912? Nope. Sorry.  If Big Blue had intended that issue or stamp to be eligible, the date criteria should have been set to reflect that.

I agree that this is following the "Letter of the Law" rather than the "Spirit of the Law" sometimes, but who am I to change Big Blue's criteria? Now I will usually mention in the blog if a whole issue is excluded because of date criteria, so the reader is aware of the situation. One always has the choice as the owner of the album to simply expand or change the date range to admit the excluded issue. And in many cases, that might be a good idea. ;-)

"Open" date (example 1900)
In many cases, Big Blue simply gives a date which corresponds nicely to a stamp issue of the same date. Again, no problem, and the stamp or issue goes into the checklist.

Unfortunately, I not infrequently have to exclude a very nice "1910" issue in Big Blue because I cannot stretch an open "1900" date to include them. Generally, I would make a comment about the situation to alert the reader.

Major number color vs minor number colors
What about a stamp that is "brown", and the space calls for 'brown", and that stamp happens to be major number say Scott 12? Obviously no problem, "Scott 12" can go in that space. Well, what about the "minor" numbers for that spaces -say 12a olive brown, 12b dark brown, 12c red brown- are they eligible? I say yes because major number Scott 12 "owns" the space, and so Scott 12's minor number companions are eligible too. BTW, I usually don't mention minor number eligibility for a space as only major numbers are usually listed in the checklist. So, to rephrase, if a major number-and it's color- is eligible for a space, then the minor color variations of the number are eligible too.

Now what about if Big Blue calls for a (now) minor number color for the space? This happens not infrequently because the colors in BB were specified with the ?1940 to ?1969 catalogue, and the 2011 Scott might have a different color as it's major number now. Big Blue might request "light brown". Looking at the 2011 catalogue, I find that that color is now relegated to a minor number-say 18a. The major number color for "18" is now "olive brown". In this case, I will put as a choice "18a or 18". I include the color BB asks for, but also include the major number today as a choice. Yes a bit of pragmatism.

Finally, Big Blue might list the color as "yellow green" ( The 1940 catalogue), while the 2011 catalogue lists the color as 'green". It is actually the same stamp, but the catalogues have changed their color description. Since this is only a descriptive difference, not a real color difference, with the "simple" checklist I will generally not make mention of it.

What about if BB calls for an expensive color, when a perfectly good (by other criteria) "near" color is available at much less expense? I might mention the cheaper choice and perhaps suggest changing the color criteria if one wants to save money. ;-)

Illustration specification
Interestingly, often an illustration permits the widest range of color choices! Since there is no descriptive (color) specification, any color (red-blue-orange) that is date eligible could be put in.

More Comments and Summary...
A) Major numbers that are eligible for inclusion will almost always be listed as choices for a stamp space.

B) Minor numbers will generally not be mentioned in the checklist. Doesn't mean they are not eligible- as I said if a major number is eligible, then the minor numbers listed under the major number are also eligible. I don't want to have a checklist with 12 numbers as choices for a stamp space, 10 of them minor. ;-)

D) Annotated vs "simple" checklist. I am now doing a 'simple" version with no comments except after the checklist section. Very clean presentation. I will not mention "minor" problems (example: " BB lists the color as light blue, while the 2011 Scott now lists the color as blue"). Any "major" problems I will try to mention in the blog or in the comment section after the checklist.

E) (   ) around a number indicates a blank space suggested selection. Generally, the choice will either be sequential or the cheapest, probably both. I don't want to clutter up the blank space entry with a long list of (generally more expensive) possibilities. Doesn't mean there aren't other choices you could make for the blank space- but you will need to do your own catalogue investigation.

F) The "simple" checklist sequence follows exactly the 1969 Big Blue layout. If you look at the checklist while having the BB page open, it should be very easy to determine what you have and what you don't have. The '97 version is almost identical, except categories (i.e. Air Post, Postage Due) will have their own heading beginning on a new page. The '47/'41 editions will share 95% of the inventory, but may differ more commonly at the beginning or at the end of the country entry, and might have a different page layout.

G) Countries or major country sections that were in the '47/'41 editions, but were removed in the '69, will be added as blog entries and a checklist will be provided. Minor removals ( example: postal tax stamps) will not be added back. I'm not formally comparing older editions content to the '69 edition at this time. I am using Bob's "Filling Spaces" list of missing countries/major sections that he has already published. Thanks Bob!

H) In the comment section below a blog entry country checklist, I will alert the reader to any stamp with a CV of $10 or more. BTW, for spaces with multiple choices, the "cheapest" choice has to be $10 or more for me to mention the price.

J) Comment about procedure and time commitment to do the checklist.
I write in all the numbers in the spaces in one of my '69 Big Blue albums right after I have become familiar with the catalogue (2011 Scott Classic Specialized ) for the country by writing in all the numbers in my Deep Blue album. Then, it is quite apparent if BB has condensed several issues into one space, or included or left out an issue. Certainly makes it easier to do, so the time commitment has gone down without sacrificing accuracy.